This is a review of Lotus Digital on the Google Play Store played on a Verizon Pixel XL. I received a free copy of the game to review.

It is hard to capture my attention for very long when it comes to mobile gaming. I generally try lots of games for a short time. Perhaps it’s my playstyle that doesn’t fit or the amount of time and effort I’m willing to give to tapping the screen. Either way, there are only a few games that get played repeatedly on my phone. Most of them are for my children but Lotus Digital by Dire Wolf Digital is one specifically for me. If you haven’t read our review on Lotus the card game be sure to check that out. As Elijah Longwell put it so wonderfully: “[Lotus] has a simple beauty that really makes it shine […] [it’s a] unique game that balances both its beauty and gameplay along with its depth and ease of entry.”. The digital version of the game does very much the same thing.

The great thing about mobile games is that there are no pieces to set up or put away and Lotus is no exception. When you start your first game you are given a tutorial that walks you through a two player game. It does a great job of teaching you the rules, which I needed since I had never played Lotus before. The instructions are clear and the tutorial takes you step by step through the game. The settings panel has expanded instructions that you can access at anytime. 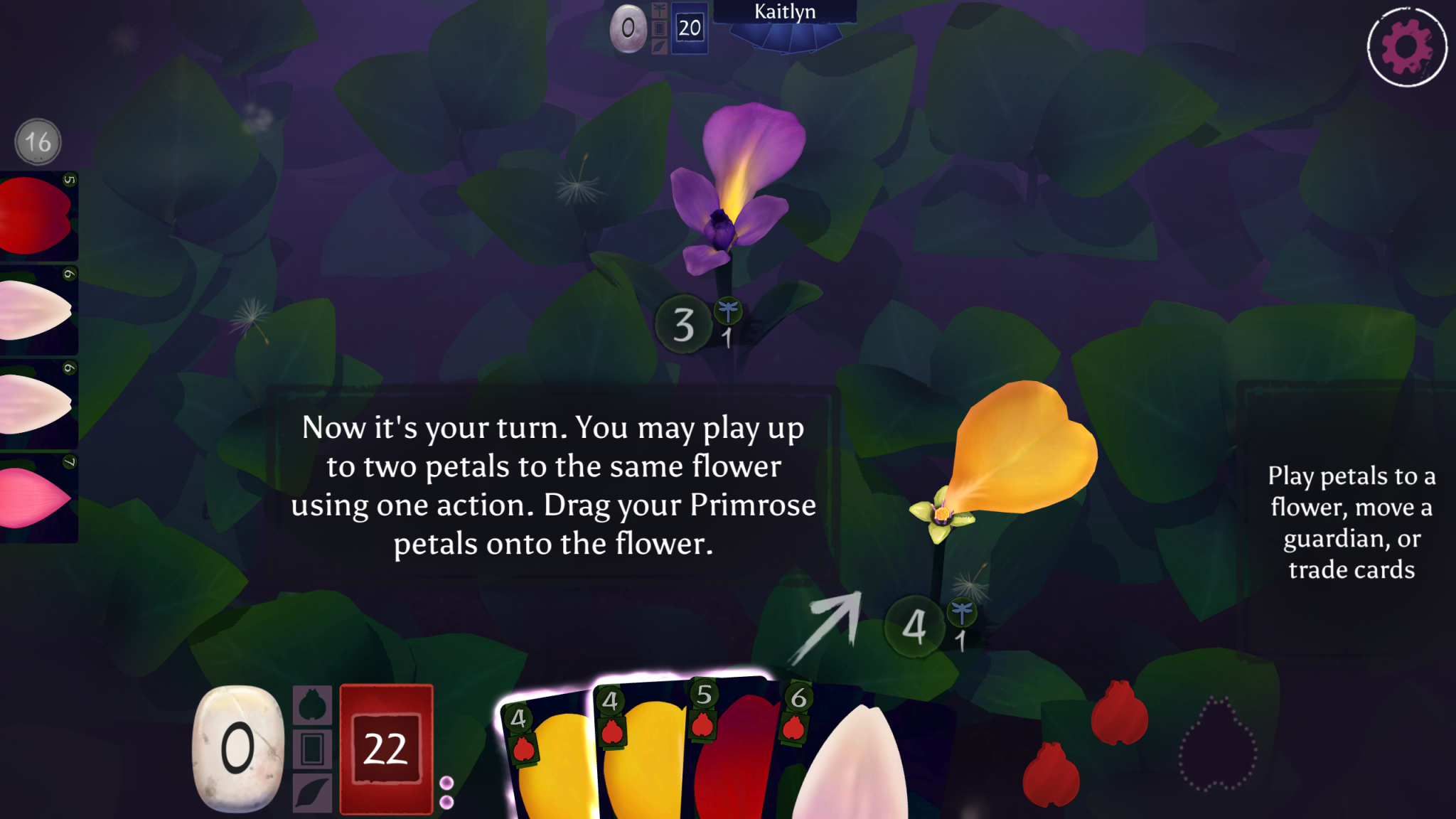 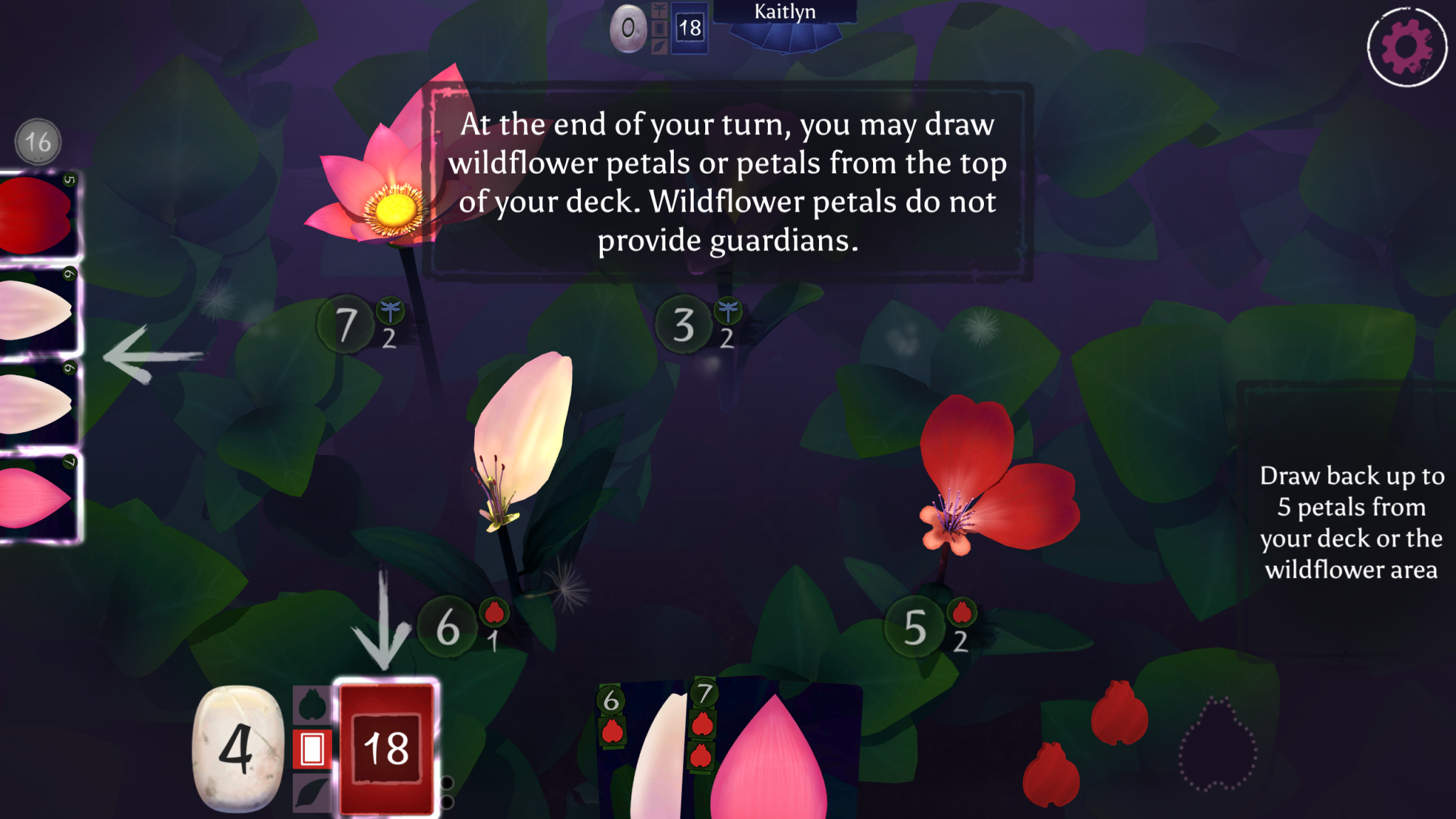 The gameplay itself is easy and quick; when starting a game you can choose to play a Solo (along with the number of computer players you want to join, as well as their difficulty) or Multiplayer game (up to 4 players). You can play online with your friends, pass one device around, or play with strangers in a ranked game online. Online is convenient with friends if you’re all willing to dedicate the 30 minutes it takes to play a game or if you’re okay with waiting for people to have the free time to make a play. Ranked is a bit frustrating. It seems as though there is no turn length for ranked play. You could be waiting hours or days for a player to take their turn. At least you can be in multiple ranked games at the same time. Pass and play is always nice except you may find yourself asking what actions the other players are taking since you can’t see the board as they make their plays.

Lotus is about flowers, and the designers have taken this seriously by making a playing field in the middle of a reflecting pool. This creates a nice focus for the riot of color, created by artist Chris Ostrowski, blooming in the middle of the play area. When you play a card it turns into a mote of light and floats to the correct flower to grow. It’s a very satisfying effect, especially when you complete a flower: Each petal, as a light mote, floats into your counter stone and gives you points. The only trouble I’ve had with the screen placement and effects are when I try to return a few cards to my deck to draw new ones. Sometimes the app doesn’t quite register that I’m dragging the card to the deck and instead places it on the board but this has been a rare occurrence and may be because of my large hands. The effects are a nice touch and do not slow down the game.

Gameplays of Lotus are accompanied by the atmospheric sounds of chirping birds and babbling brooks, and the music sounds of soft bell chimes or a meditation bowl vibrating. During the game, each of your moves has a sound effect of a clicking, tinkling, or soft shuffling of cards. These effects are so complimentary to the game they feel like part of the background music. The music that plays during the game is soft and unobtrusive and doesn’t distract from the sound effects or gameplay; instead adding a sense of calmness and tranquility. It also isn’t a hokey stereotype of what you’d think Japanese music might sound like either. All of these combined feel like a respectful acknowledgement of what this game is based on: sitting in a Japanese garden, reflecting, thinking, and enjoying a game of strategy. 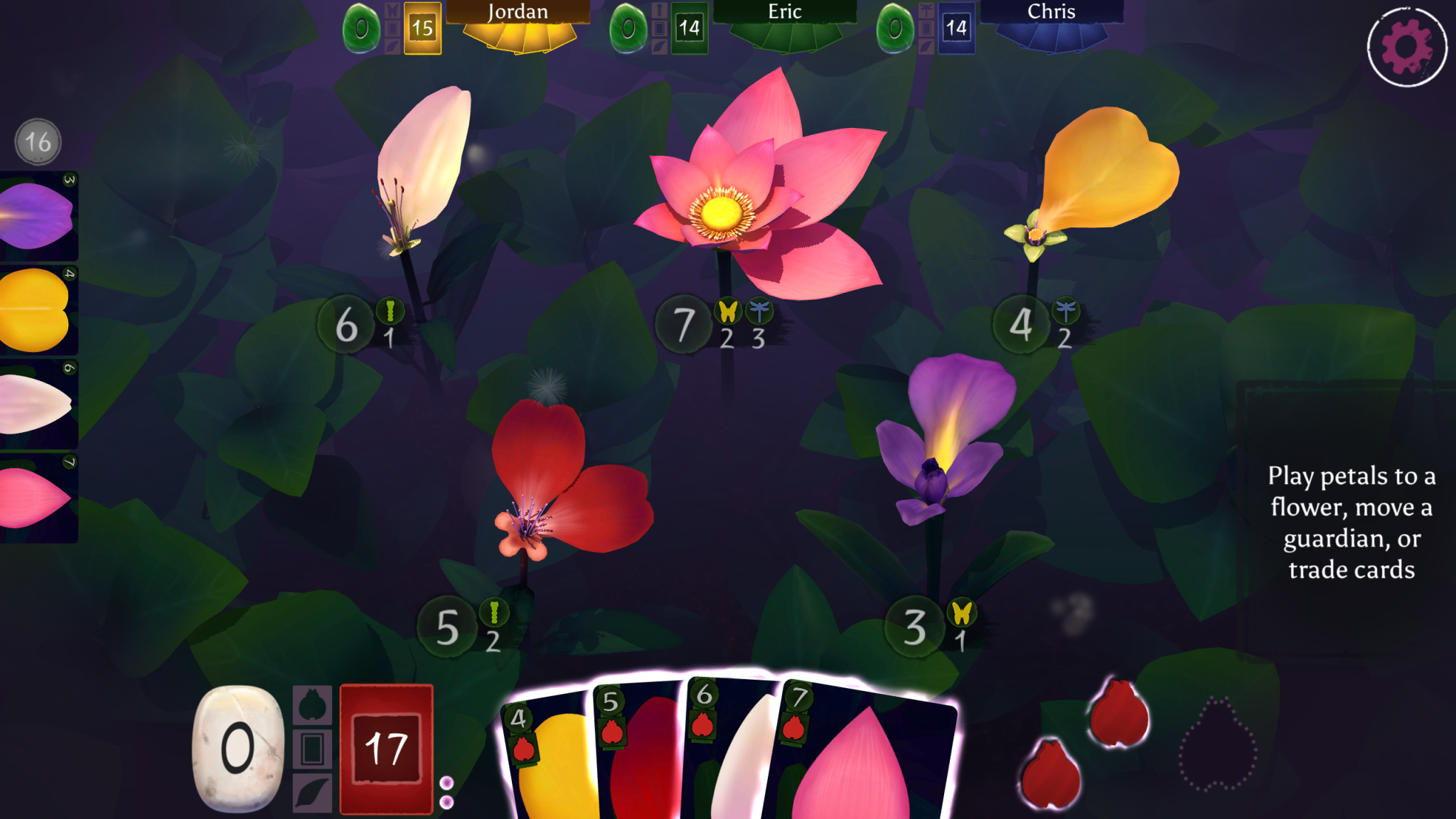 The game itself is beautiful. The screen doesn’t feel cluttered with stuff, and all the numbers and hands of cards are tucked nicely away at the edges of the screen. The cards are easy to see and all your player pieces are easily accessible. A stone next to each players hand keeps track of the scores. The colors of the other players’ stones are chosen at random from my experience. As a slightly color blind player, there were times when I had difficulty reading the scores of other players when they were on darker stones. The stones do not match the colors of the other players’ guardian tokens but the backs of the cards do. While this is helpful, I was still often confused as to which player was yellow or orange. If this is a problem for you also then this could be remedied by changing my own color and guardian token to one of those. 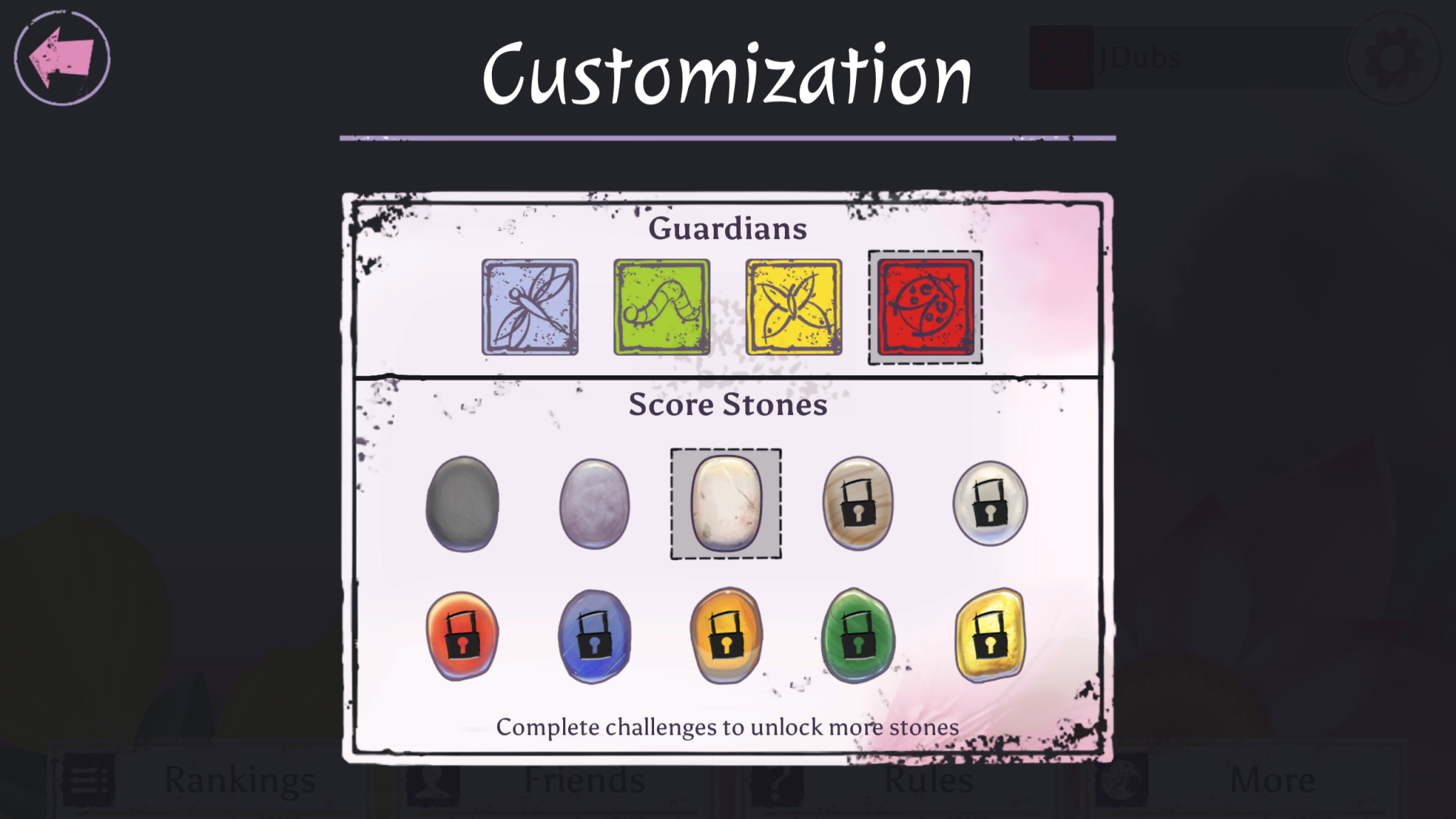 The more you play, the more personal challenges are presented to you. Completing these challenges unlocks different color scoring stones. So while the reward doesn’t feel very…rewarding, it is nice to have some challenges to work through while also trying to win games. I would like to see more guardian token options to unlock, different backgrounds, or music styles. I feel this would give more incentive for completing those challenges. Completed challenges  only register when you finish a game or purposefully open the “Challenges” window to see your progression. This makes completing more than the three presented challenges during a game a bit more tedious. It would be convenient if they would autocomplete, but any notification during the game may be disruptive. I’m not sure how this could be done better. It felt like I was missing an opportunity to complete more challenges unless I was intentional about checking the them often. 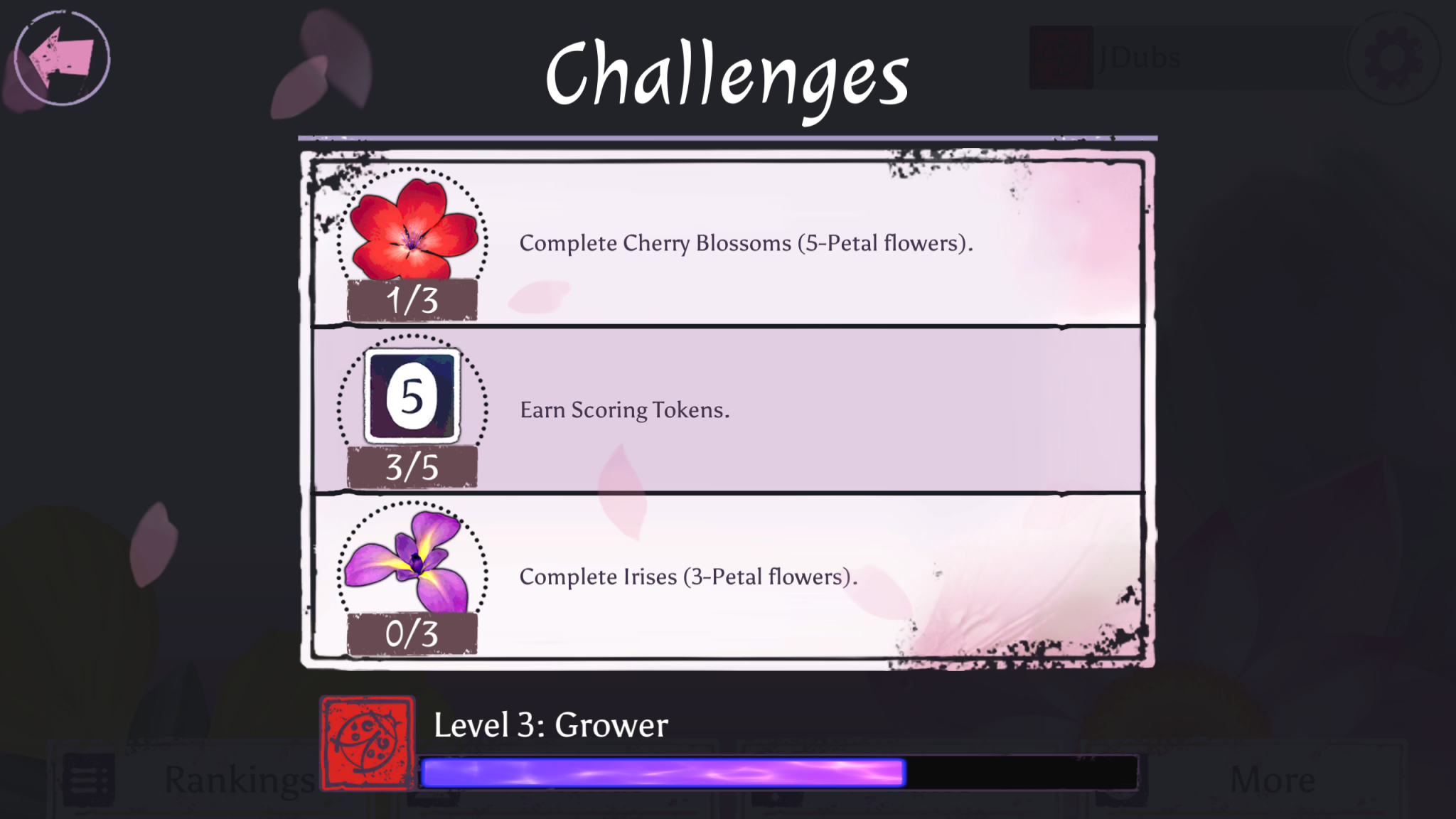 One of my biggest struggles was knowing when the last round was taking place. When one player draws the last card in their deck, each player, including whoever drew the final card, takes one more turn. On the screen you can see how many cards are left in each deck and when a player draws the last card there is a small text box under their cards saying “Last Turn” but this is very inconspicuous. All of a sudden I’m on my last turn, disappointed that I wasn’t prepared. Yes, this can be fixed by playing in a very hyper-aware state and keeping constant count of all the cards. However, a warning across the screen or some other way to notify you that a player has drawn the last card would be very helpful.

Overall Lotus Digital is a great game for $5. There is nothing else to unlock through paying so you get the full game, however, the more you play the more cosmetic choices you unlock. You get the full game. If you can get a few of your friends to join you on their mobile devices that’s an added benefit to purchasing this game. I’ve been playing a lot of Solo games versus the 4, hard difficulty, computer players, and they give me a good challenge. It certainly isn’t a stroll through the garden. There are a few things I’d like to see added or changed but by no means are they deal-breaking or frustrating enough to stop playing. It’s a great game to pick up and play while you’re waiting or if you just need a few minutes of calm. The graphics, music, sound, and gameplay blend together in a gorgeous presentation that is immersive, challenging, and very enjoyable.