The King is looking for a new ‘Craftmaster’ and is holding a competition for the best smithies in the realm to decide who will get the job. The King has a list of commonplace and exotic items to test your crafting skills. You’ll have to earn such an esteemed position by forging ahead of the competition, making more and higher quality items than your opponents.

The aim of King’s Forge is to be the first player to craft 4 items, thus impressing the King and winning you the enviable status as ‘Craftmaster to the King’. At the top of the board is a selection of item cards with pictures of dice on them. To craft an item you need to roll dice of the matching material (colour) with a value equal or greater than the value of the pips shown. The dice come in 4 raw materials of increasing value: metal (black), wood (green), gem (red) and magic (blue). Everyone starts the game with 5 metal dice and builds their dice pool from there.

Each round is split into two phases – the gather phase and the craft phase. In the gather phase players take turns choosing gather cards and using the dock spaces to gain more dice, upgrade or exchange dice, mess with other players or gain ways of manipulating the dice when they’re rolled. At any given time there are 4 gather cards available (each with two possible actions), whilst the 4 dock locations let players sacrifice dice for better dice or dice manipulation actions. 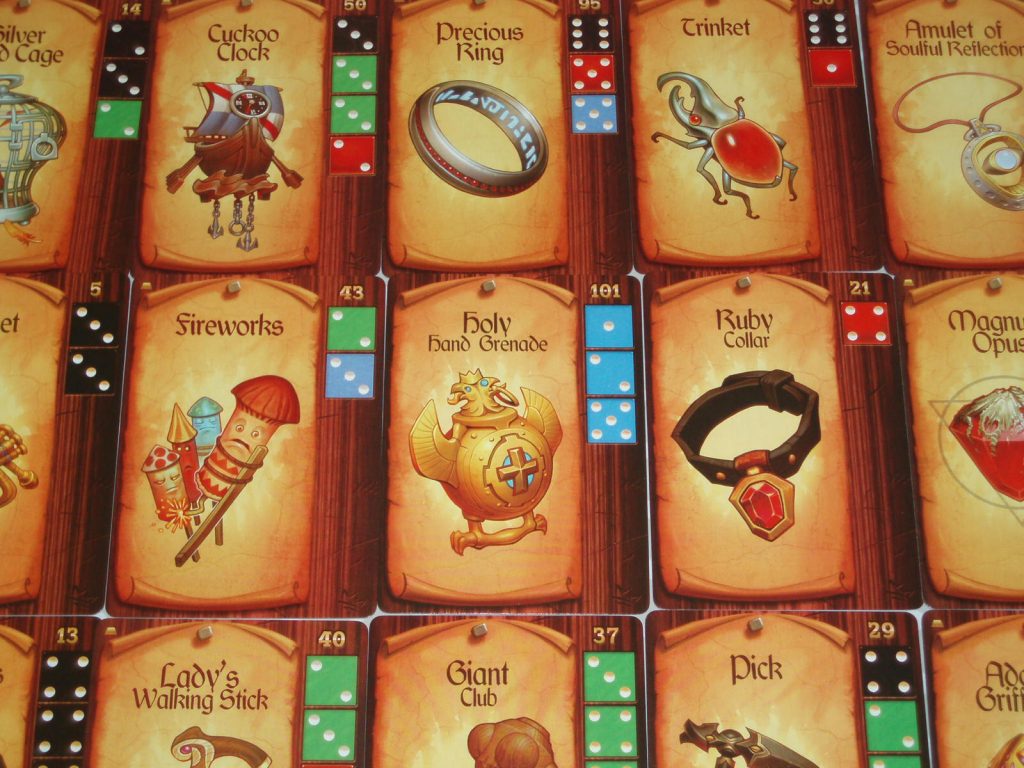 In the craft phase players try to craft one or more of the items currently available by rolling high enough with their remaining dice (dice used in the gather phase aren’t usually available for the craft phase). Three items are always available to craft and when one is taken another replaces it from the visible queue above. However, claimed items are not safe until the end of the round – should you roll higher than the dice currently claiming an item for another player then you can steal it for yourself.

Once the crafting is finished, the round is over. If someone has crafted their 4th item then the game finishes, otherwise the players return the gather cards which are shuffled and laid out again for the start of the next round.

The Perils of Judging Books by their Covers

I’ll admit, I had a few concerns before playing. The rules seem denser than the gameplay warrants. The artwork is strong but erratic: the board is soft chalky pastels, the item cards are vibrant and bold, whilst the gather cards are all heavy black borders and digital cartoon imagery. Individually each element is gorgeous but combined it’s slightly jarringly inconsistent. The mechanics and gameplay suggest a heavy reliance on the outcomes of dice rolling with too few ways of mitigating poor rolls. And with only 11 gather cards per game it seemed like you could be stuck with some rubbish choices if other players claim what you need before you even have a chance of getting it. 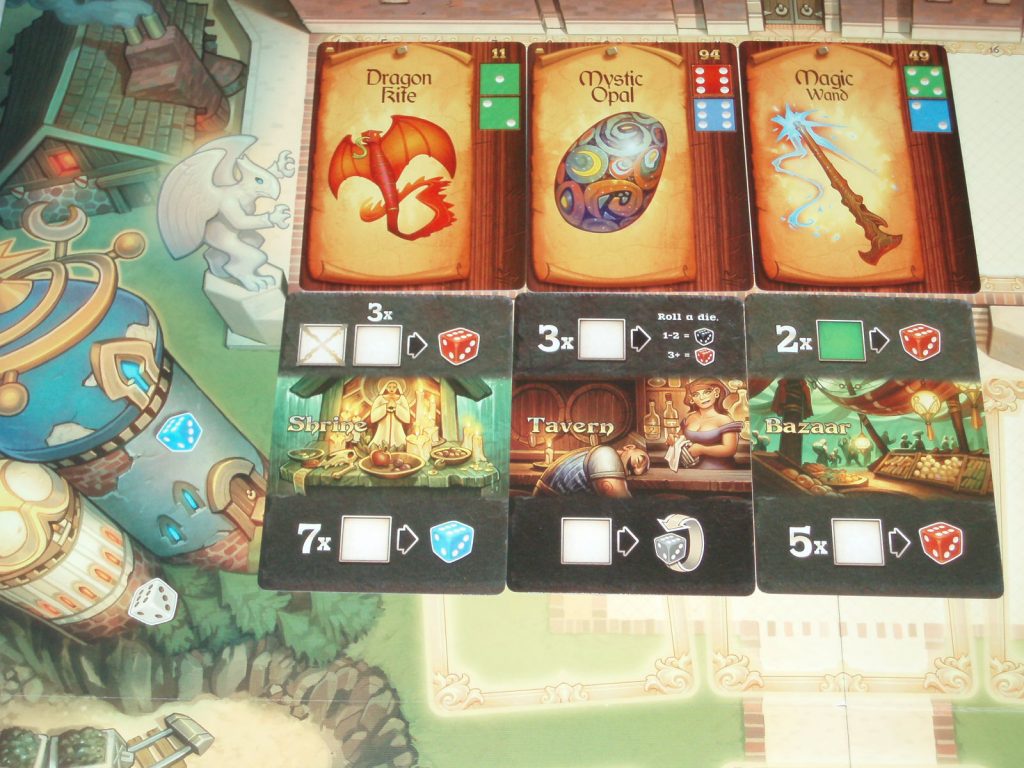 Yes, my expectations weren’t high going in. And you know what? I was wrong. King’s Forge is a giddy joy of engine building and dice rolling.

But such expectations are misleading, this isn’t Century: Dice Road. Players aren’t individually creating cube-converting engines with their own cards and numbly coasting those engines to the game’s end. Instead the cards are a central pool that players choose from and return at the end of each round. They don’t change over the game but which specific cards you can pick up at any given time does. Unlike Century: Spice Road it’s almost always possible to get what you want in a round but it’s the price asked of you that informs your decisions. The cards in King’s Forge are routes for running your engine along but the engine itself turns out to be the dice.

It’s an engine that you have to hamstring if you want to improve it. To do well in one of the game’s two areas (gathering and crafting) generally means not doing as well in the other. If you need better dice for crafting a particular item then you’ll have to spend dice to gather them, reducing your crafting ability that round. Each round is a process of deciding how far across the line between gathering and crafting you’re willing to walk. 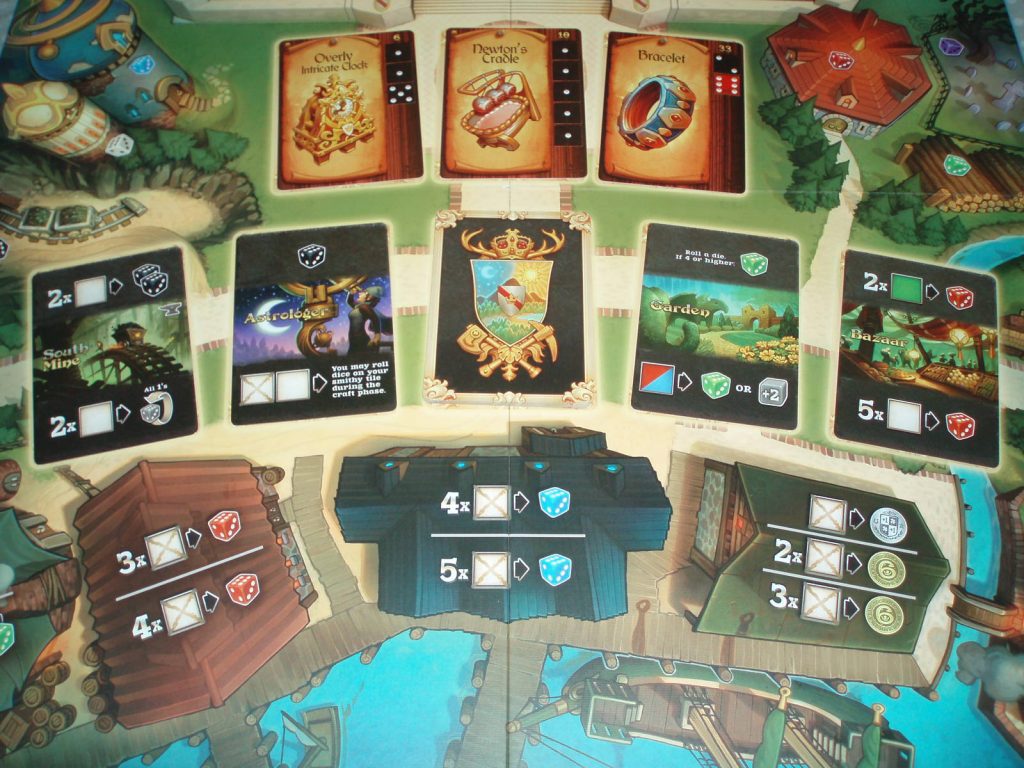 The more dice you have the more likely it is that you’ll roll successfully, but spend too long collecting dice and someone else will get there first. Yet ignoring the gather phase, only to then fail to make anything in the crafting phase is a complete and utter waste of a round. This risk-reward of King’s Forge is moreish, and the dice manipulation abilities can tip the balance at the vital moment. Whilst there aren’t many of these, there are enough to all but guarantee you a good roll if you’re willing to pay for it. Luck always has a hand in the game, but it can be mitigated and it provides far more memorable and exciting moments than the clinical sterility of Century: Spice Road allows for.

Dice to Meet You

Far from being a solitary gaming experience, as with many an engine builder, King’s Forge has a layer of interaction at every stage, from the claiming of gather cards each round to the out crafting of items. With only 3 items available to craft at a time it’s likely that someone else around the table is aiming for the same thing as you. You’re constantly looking at what dice your opponents have so that you aren’t caught unawares – maybe you’ll change your priorities and focus on getting some dice manipulation abilities to give you the edge or maybe you’ll hang onto a few more dice in the gather phase to give yourself better odds at out crafting your opponents. 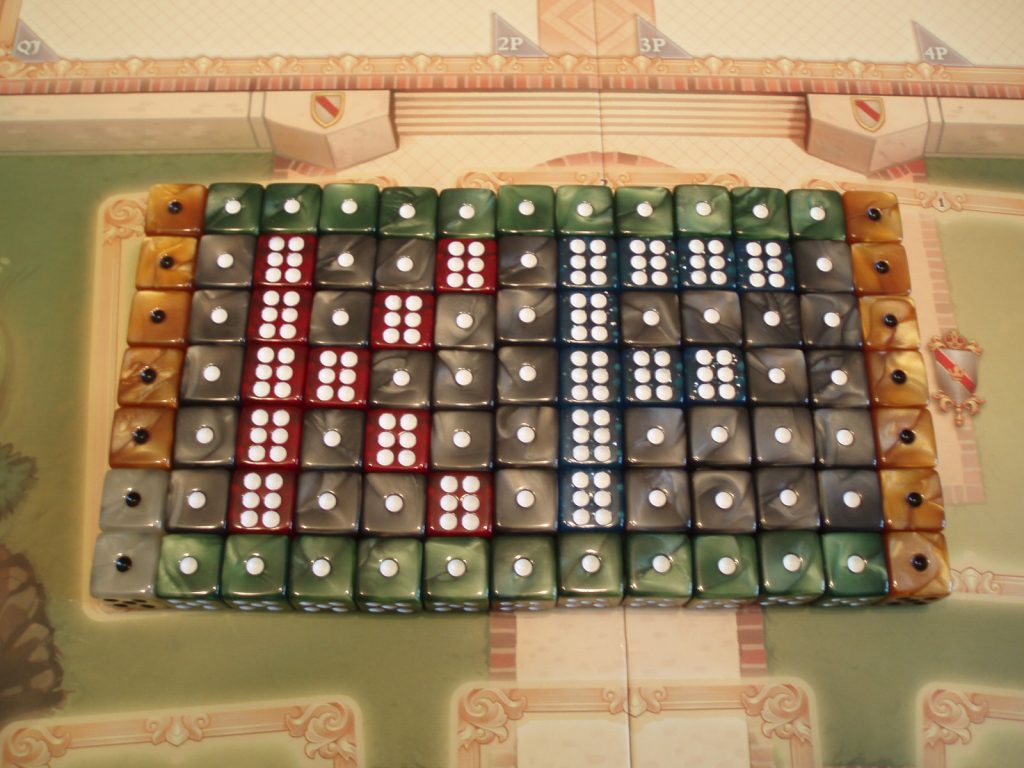 The many shiny dice, including 12 golden dice from the King’s Forge: Gold expansion.

Rolling a literal handful of the small and gorgeous dice is incredibly satisfying, but King’s Forge also has a great arc. Since the requirements of every item are visible you can tune your dice engine from the first round, aware of what you need now and what you’ll need in the future. It means that King’s Forge starts slow but by the end it’s frantic, items being greedily snatched up like sweets.

It would be facetious to suggest that the theme of King’s Forge is thin and you’ll just end up referring to the dice as black, green, red and blue rather than metal, wood, gems and magic. To a certain extent that’s true, but it’s not as much as you might expect. In particular, even though you can play without it, the game board helps to tie the theme to the mechanics with surprising vigour. Even my biggest thematic bugbear makes sense mechanically: when you craft an item you keep the dice you used. Thematically this is plain wrong – when you make something you don’t still have the materials available to build something else. But mechanically it makes total sense: losing your dice each time you crafted an item would sabotage your engine and turn the game glacial. I don’t like the rule but I wouldn’t want to play without it (and imagine that the King reimburses you for your spent materials). 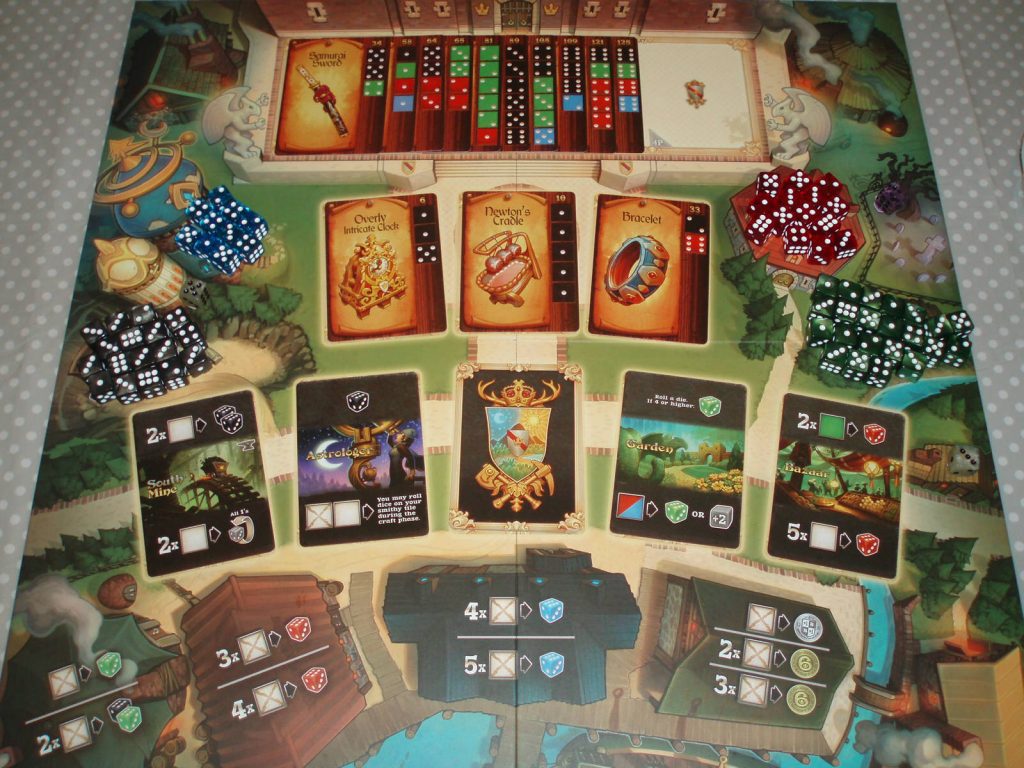 King’s Forge is a lot of fun. The player interaction and added depth elevates it far above popular solitaire engine-builder games such as Century: Spice Road or Splendor, although on the flipside King’s Forge is fractionally longer, slightly more rules intensive and a bit pricier. The stealing mechanic and a couple of the crafting cards can also seem a little harsh if you don’t enjoy such things. Additionally, like with those other games, repeated plays can start to feel like there’s something missing (although the degree of player interaction definitely helps to mitigate this). Happily there are also five expansions that can add to the experience, from introducing new materials such as glass to hiring apprentices that give you bonuses each round (stay tuned for our upcoming review of the Gold expansion).

King’s Forge surprised me with just how much fun I’ve had playing it. It’s quick to set up and put away, it’s easy to teach, has a fantastic build in pace and the interaction makes it tense and competitive. Whilst King’s Forge isn’t perfect, I think it’s great! If you like simple, quick engine builders like Splendor or Century: Spice Road but crave something a bit more interesting and with more character, then King’s Forge is well worth checking out. This copy of King’s Forge was provided in exchange for a fair and impartial review. As an example of putting my money where my mouth is, I’ve since backed the most recent Kickstarter and ordered another expansion. You could say I was gathering expansions to craft the ultimate King’s Forge experience!