Jessi Goodwin
Set deep in the jungle, Karuba is a tile placement game that encourages players to channel their inner Indiana Jones. Opponents navigate their way through a tricky jungle maze as they race to attain treasures and collect valuable artifacts from long-lost temples. Join us as we review Karuba!

Set deep in the jungle, Karuba is a tile placement game that encourages players to channel their inner Indiana Jones. Opponents navigate their way through a tricky jungle maze as they race to attain treasures and collect valuable artifacts from long-lost temples. Featuring colorful illustrations, quality components and shiny gemstones, Karuba is a unique strategy game that is both visually appealing and addictive to play.

Many moons have come and gone since your boats departed on the journey to Karuba. Once you arrive on the island, each player will lead an expedition team of four adventurers. Now you just have to navigate your way through the dense jungle to make it to the temples. “Just“ may be something of an understatement; the ancient jungle trails have to be found and uncovered first!

Hurry up and be the first to reach the temples to collect the most valuable treasures. Many paths have dead ends and you need to be patient to find the right/best way (through the jungle). Look! A gold nugget! You can pick it up and collect it, same applies to the shiny crystals along the paths. 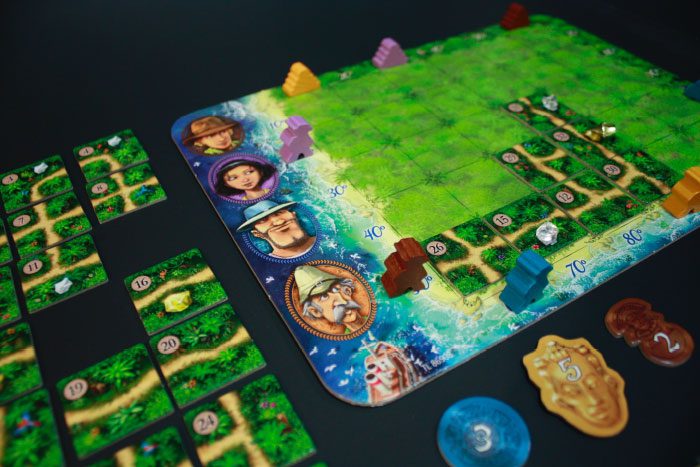 Place tiles and race your opponents, while collecting treasure and artifacts along the way. 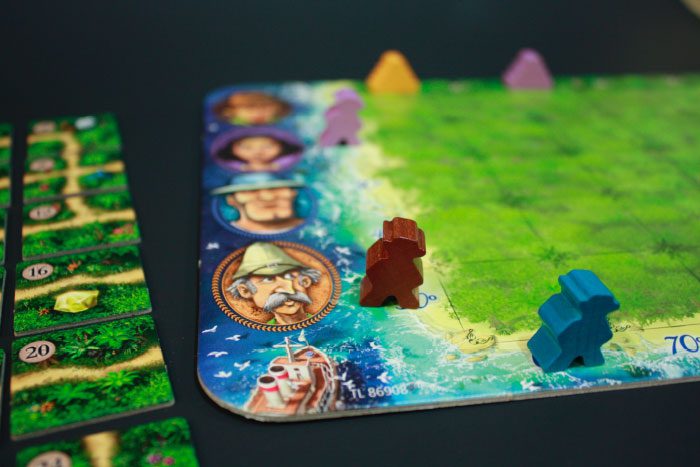 Explorers are cooperatively placed on the beach sides of the island board, while temples are placed along jungle edges.

An expedition leader is elected and they shuffle and stack their 36 maze tiles face-down while the remaining player(s) organize their maze tiles face-up in numerical order (1-36).

We have found that when playing as a family the role of team leader is terrific for younger participants who typically require more time to organize and search through their sequence of numbers. 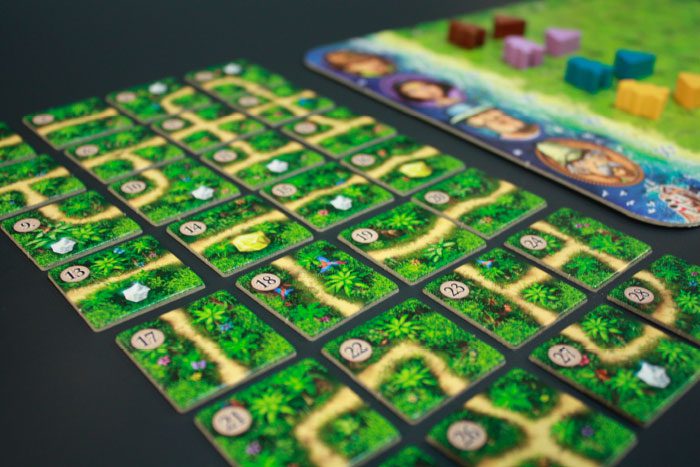 Organizing tiles numerical makes them easier to locate and also provides a small visual advantage to those who are not acting as expedition leader (being able to quickly take stock of which tiles remain in play can assist when plotting your jungle trails).

In Karuba all players begin and end their expeditions on their individual island boards (you may never place a tile or move a piece on another player’s board).

Each round of play begins with the expedition leader revealing one of their face-down maze tiles and clearly announcing the number to the other player(s). Each player then selects the identically numbered maze piece from their own tiles.

Players now have two options as to how to use their maze tile. They may either (1.) add the piece to their island maze or (2.) discard the tile and move one of their wooden explorers toward a color-coordinating temple.

Adding a tile to the maze

Players may choose to place their tile on their island grid in an attempt to create paths that lead each of their explorers to their coordinating temples (the gold explorer is trying to reach the gold temple, etc). Vigilance is key as trails are charted through the island jungles. Players must remember to not inadvertently complicate or completely block a path as they create their island maze in the quest for treasure. Tiles must be placed on the grid with their numbers in the upper left hand corner.

Discarding a tile to move an explorer

Instead of placing a tile onto their island board, a player may instead discard the tile to move any one explorer. This is how explorers navigate their maze, collecting crystal and gold as they race to their temples.

When an explorer reaches a temple they take the corresponding artifact of that color with the highest remaining value (the first explorer to reach their temple will claim the 5 point artifact, and so on), however if two or more players reach the same color temple on the same turn they will each receive the same value of points (one player will take the highest available artifact, and the next player(s) will take the next highest valued artifact plus crystal pieces to make up the point difference).

The game ends when all 36 numbered tiles have been revealed and used, OR when one player has reached all 4 of their coordinating temples.

The winner is decided by tallying accumulated treasure points which are scored as follows: 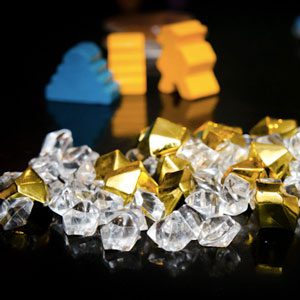 Karuba is cleverly designed with cooperative character setup and tile placement mechanics that provide endless unique plays, and removes any opportunity for unfair advantages. It should be no surprise that Karuba was a ‘2016: Spiel Des Jahres’ nominee.

What I dislike about Karuba

I honestly can’t say that there is much I dislike about this game. Karuba requires a certain level of vigilance. Once a path is placed it can not be moved later, potentially create a maze with no way of reaching your temple destinations. This could be very frustrating for younger players without the maturity of foresight.

The setup is minimally tedious for players who have to reorganize their numbered pieces (those not playing as the expedition lead), however it is still relatively quick and only requires arranging tiles in a sequence from 1-36.

It would be great if the game included pieces for a couple of additional players, however a true Karuba addict could easily pick up a second copy of the game if they wanted to be able to play with more than 4 people at a time.

Each game played is refreshingly unique. With countless combinations of starting positions and randomized tile drawing the game retains a fresh feel for dozens of plays. Karuba is consistently engaging as all participants play simultaneously, which allows the game to move along quickly without the lags in play that can come from waiting for individual turns. I love the deliciously fair and balanced mode of play, with all players starting from the exact same spots on their islands, and drawing identical tiles.

My family has found that games can easily be played in under the recommended 30 minutes, allowing for back-to-back game marathons and immediate rematch opportunities. Karba requires light strategy that is simple enough for our 5 year old to enjoy playing (with minor assistance), making it an excellent choice for our family of four.

What do you think about Karuba? Give us your opinions about what you like and/or dislike about the game in the comments below! 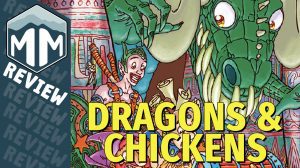 Hello. My name is Jessi and I’m addicted to boardgames. I’m also a freelance artist, writer, mother, teacher, and animal advocate, who enjoys rollerskating in my (limited) free time.