I usually try to lead with an image, an idea, or a metaphor when I start off a review; it helps me contextualize a game for myself and my presumed audience. But, in trying to write about Irish Gauge, I can’t think of anything more substantive and generous to say about the game other than it is fun – in fact, it’s a blast, especially if you don’t do the math. 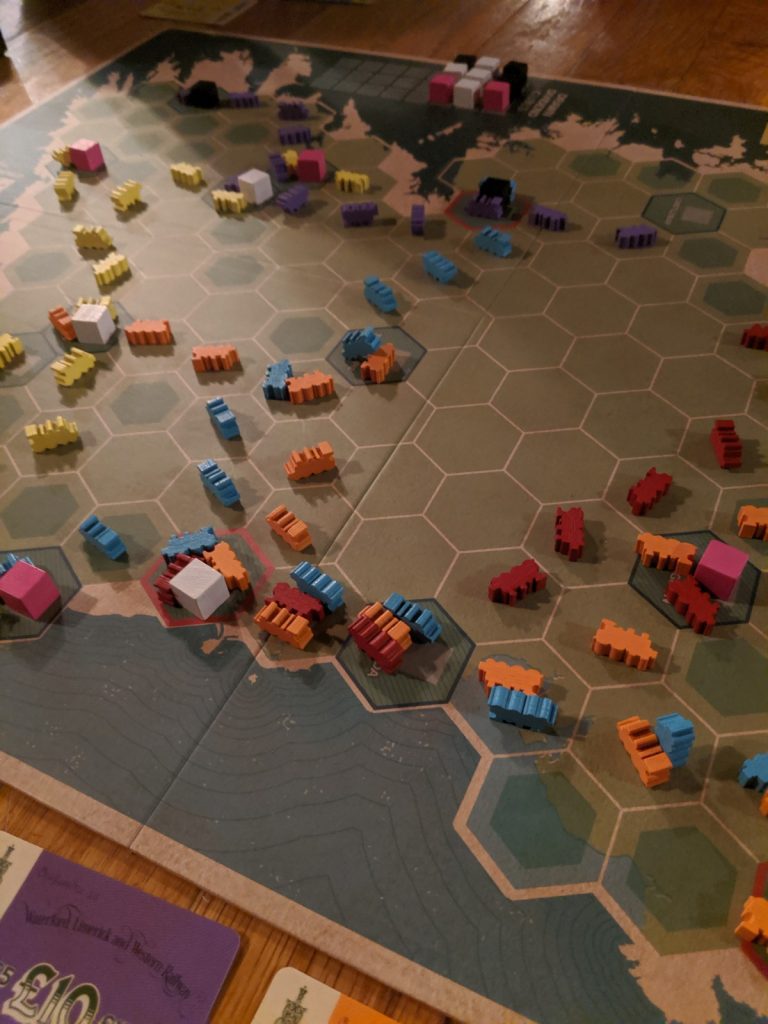 Look at all the trains!

I’m something of an outlier in the investment games community. I love stock-holding games, investment games, games with economies, but I don’t really enjoy doing algebra or arithmetic. So, when I dip my toe in an 18xx, or I take control of a member of the Illuminati in Imperial 2030, I mostly play with my gut. I don’t win often, but I do have a lot of fun.

If you read that paragraph and don’t have any idea of what I’m talking about, here’s a quick primer. Investment games and stock-holding games usually model a small part of an investment economy. In 18xx games, each player is an investor who funds different train companies (receiving stock for doing so) with a personal supply of cash. Depending on the game, a majority shareholder will control that company’s pieces on the board. Then, that player must effectively manage that company to get payouts of cash from the game system. Because multiple players are investing in a company, investment-style games often create shared incentives, feature lots of arithmetic, and are incredibly cutthroat. Many of them have functioning stock markets. 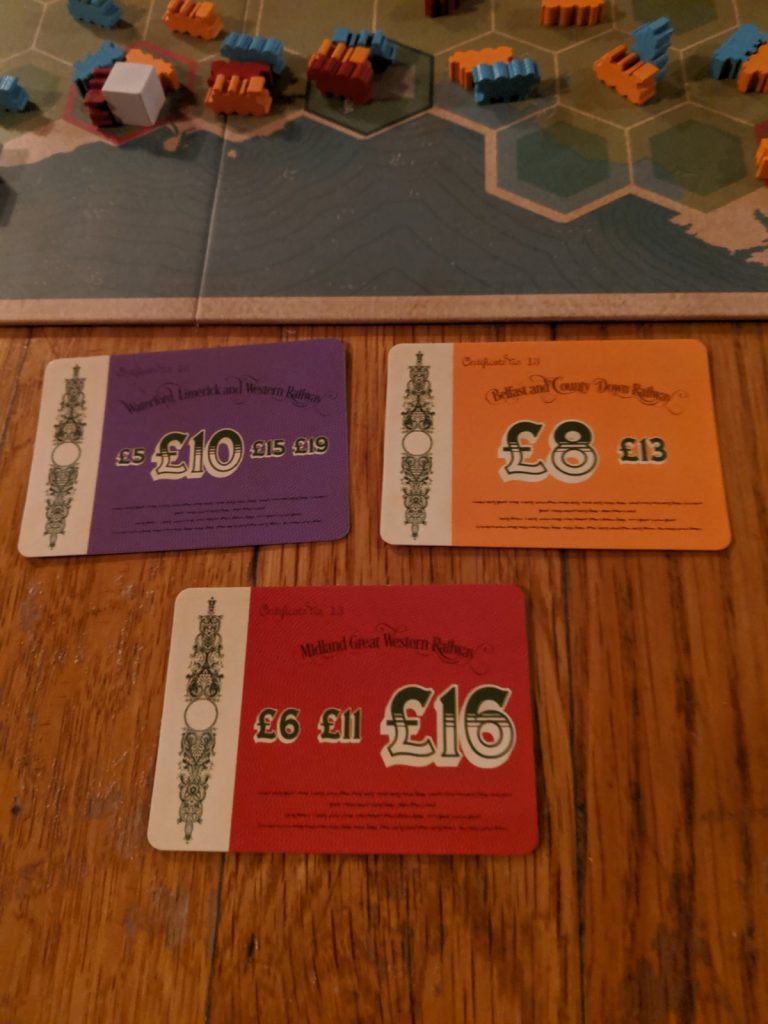 If you’re new to this style of game, I highly recommend starting with something like Irish Gauge, Chicago Express, or the fantastic eurogame/investment hybrid Imperial/Imperial 2030.

Back to the review. Irish Gauge demonstrates how much you can abstract away in an investment game while still retaining the excitement and tension of trying to undercut your friends and the market. I’m not the biggest fan of super-de-dooper long rules summaries, but Irish Gauge is so elegant, I can summarize it quickly. Basically, there are five train companies and each train company has a number of shares. Each player bids to win shares, and when they have a share in a company, they can lay track (represented by cute l’il trains in this Capstone Games edition). Laying track judiciously will get you big dividends if done properly, and dividends equals money, and money is what wins you the game!

At the start of the game, between 3-5 players will compete in an auction for one share of each company. Then the game begins. On a player’s turn, they may do one of the following actions:

What are these cubes, you ask? That’s one part of the innovation that Irish Gauge adds to the train/investment game formula. Connecting trains to the right cities is one part of the puzzle, but there are two types of “urban” hexes, ones without a cube (called towns) and ones with a cube (called cities). In order for a rail line to pay dividends, it must meet one of two requirements:

There are three different colors of cubes, and when you draw them from the bag (there’s a total of 10 of each color at the start, and there’s a random distribution at the beginning of the game) that will determine what cities are paying. 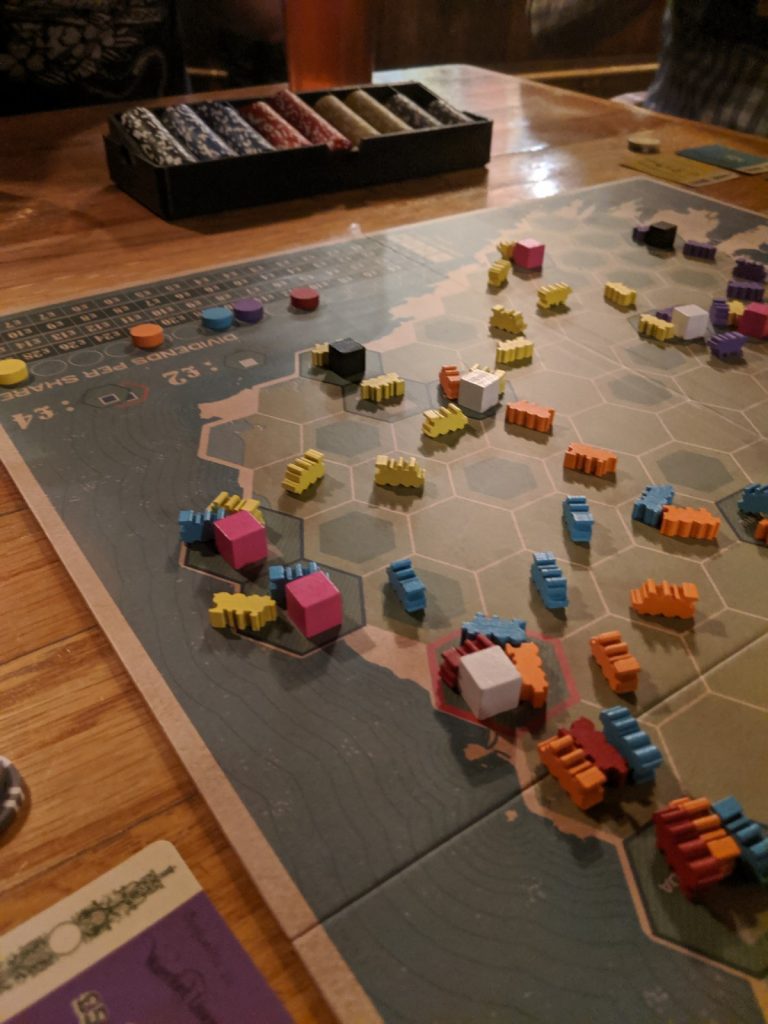 That’s part of what makes the game fun and light—like many investment games, there is a degree of calculability and determinism, but in this case, the bag drawing feels like a dividend slot machine that you improve by building smart railway networks.

Add in other streamlined improvements, like starting bids that are printed on each share (and are added into your total score at the end), and you have a complete investment experience that can be played in 45 minutes. Boom!

Irish Gauge fits neatly in my mind as a companion to one of designer Tom Russell’s earlier designs, Northern Pacific. It’s a step up in complexity, though not by much, and it makes me really want to give The Soo Line a try (Russell runs an indie game company called Hollandspiele, which makes some really interesting stuff, I’d encourage you to check it out). Northern Pacific abstracts much of the complexity of investment games into a choice between placing a cube or placing a train, but it is a masterclass in how to manipulate turn order (here’s a great Northern Pacific strategy article from Root designer Cole Wehrle) and how to control the pace and flow of a game.