Imperial Settlers, designed by Ignacy Trzewiczek, is a card game of civilization and engine building. Each player selects one of several factions (Romans, Egyptians, Barbarians, Japanese, the Atlanteans, or beginning with this expansion, the Aztecs) and uses that faction’s Faction deck in conjunction with a deck of Common cards to produce resources, acquire more cards, build locations, and to score points. The game is played over a total of five rounds and the person who has accumulated the most points at the end of the game wins.

In this multi-article series, I am going to discuss Imperial Settlers and all of its expansions. I’ll tell you how they work, how they change the game, and what I think about them. In my previous articles, I talked a lot about the base game and the game’s first few expansions. In this article, I am going to focus on the second of the game’s two larger expansions: The Aztecs. Since I’ve previously discussed how the game is played, I am just going to discuss what this expansion brings to the game and how it changes it. Of course, it goes without saying that this expansion opens up new possibilities for pre-constructed decks if that’s your thing. So, without further adieu…

Like the Atlanteans expansion, the Aztecs expansion introduces a brand new faction to the game that presents its own unique mechanics and challenges. The Aztecs play just like any of the base factions, but they introduce a new Pray mechanic to the game – a sort of “press your luck/shoot for the moon and hope you get lucky” kind of deal. 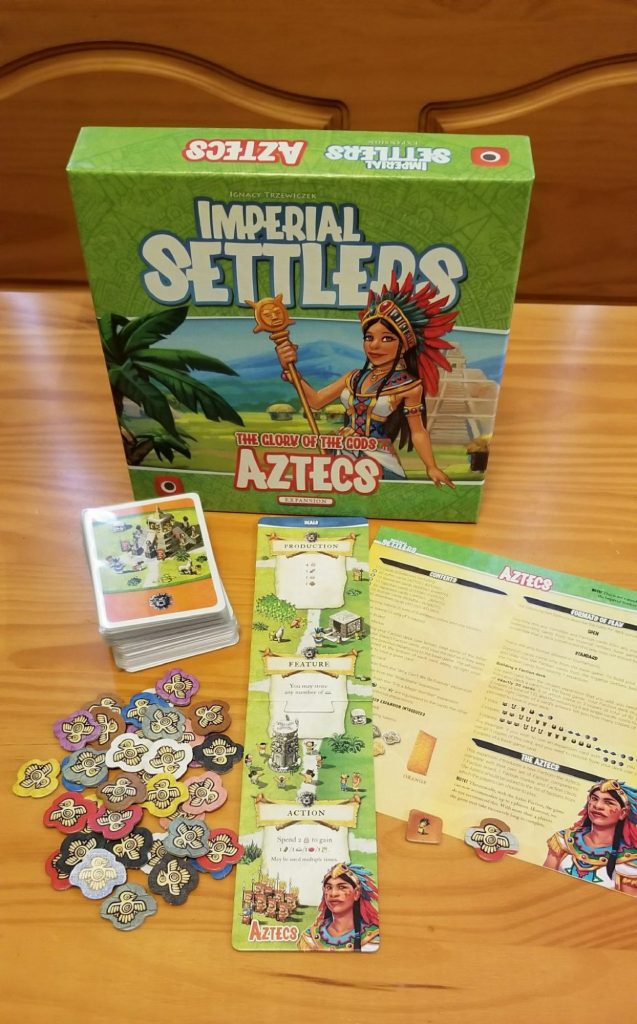 The Aztecs expansion is packaged inside of a small, square box. Included inside of the box are 110 cards: 60 Aztec Faction cards and 10 cards for the other factions. Also inside of the box are a collection of “blessing” tokens which are vaguely shaped like the birds you’d find on a totem pole. These come in 9 different colors and there is also a single tri-colored one. Also included are a 4-page rules booklet, a Faction marker, and a Faction board which is broken into two pieces that fit together like a jigsaw puzzle. All of the pieces here are of the same high quality as the base game and the other expansions. 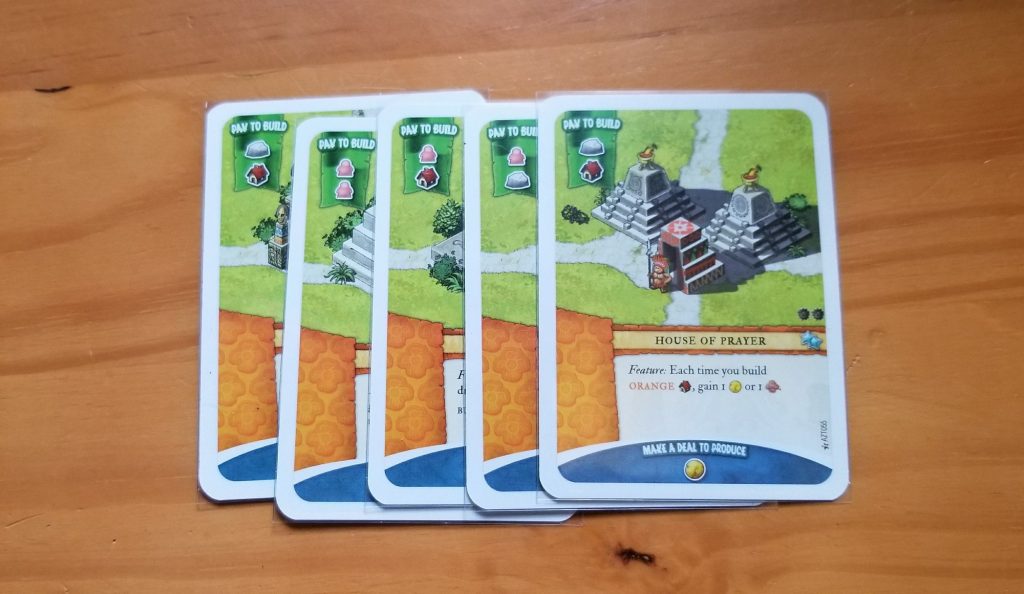 The Aztecs introduces a new color to the game – orange – along with its new goods/color association – blessing tokens. 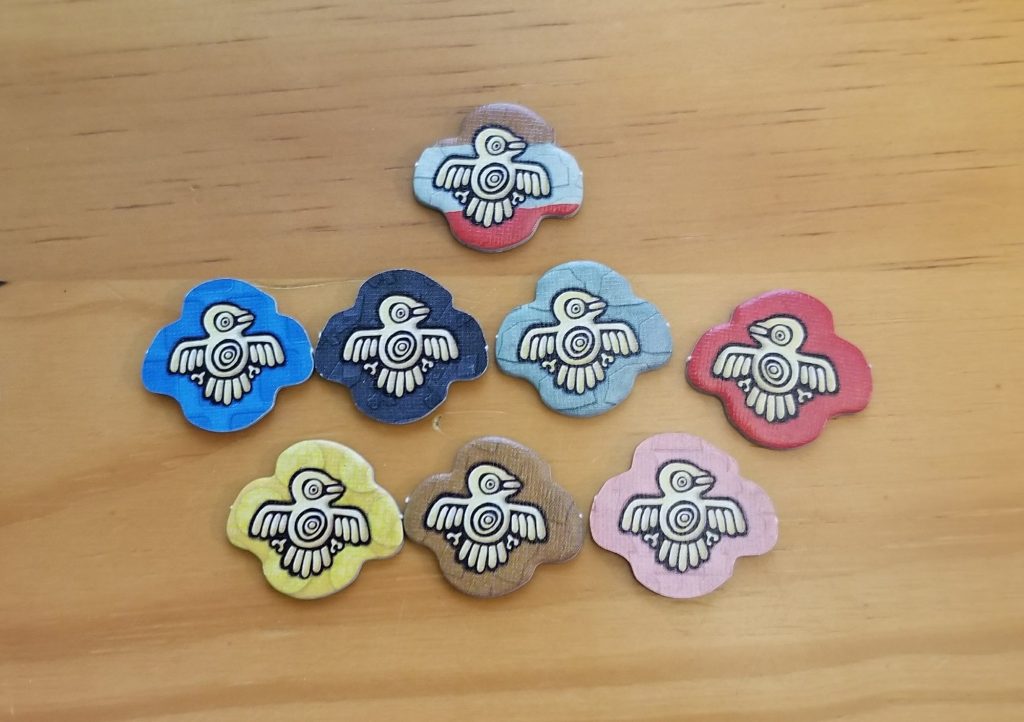 The Aztecs expansion adds several cards to each faction deck which allow them to Pray in order to achieve a certain outcome. The word ‘Pray’ is always preceded by the phase in which the ability can be used (Production, Pray – for example). The Pray ability will always require you to flip over a certain number of cards from the common deck and then something might happen depending upon the colors of the cards that were revealed in this manner. Whether or not anything happens depends upon whether or not the Pray ability had any success.

Determining success depends on what the card in question told you to do. If the card told you to “announce a color” then you would state which color you’re hoping to see and start flipping cards. If the stated color is revealed, then the Pray ability has been successful. Some cards allow you to “choose a color”. The color is chosen from the colors of the revealed cards. Not all cards that have the Pray keyword on them require a card to be “announced” or “chosen”. Some simply react to the colors that are revealed. If the card reacts when certain colors are revealed, then the Pray action is considered successful if that color is revealed even once. Success or lack thereof is important because successful actions can be boosted by using blessing tokens and this results in extra rewards or extra victory points. 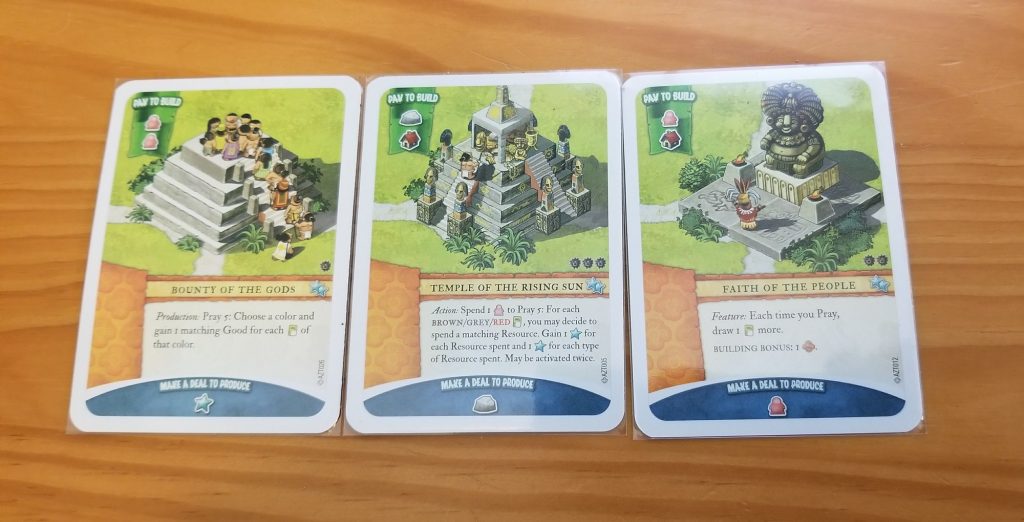 Blessing tokens can be used in lieu of flipping cards, too. For instance, if a card would ask you to Pray 5 and then do a certain thing every time a Black card is revealed, you can either cross your fingers and start flipping cards and risk not flipping over any Black cards OR you can use your black blessing token (provided you have collected one) to ensure success. Obviously, there is always a chance you could flip over 5 Black cards in a row whereas using a blessing token would only garner you one single success.

These are the new elements brought to the table with the addition of The Aztecs expansion and boy do they make a world of difference.

The Aztecs adds a new degree of difficulty to the base game with the addition of a healthy dose of luck driven strategy. This will not sit well with some people because randomness means loss of control and Imperial Settlers is a game that requires a good deal of control if you want to be good at playing it. I am one of those people that dislikes randomness in board games. That being said, having played this faction multiple times, it is probably my second favorite to play despite its healthy reliance on luck.

The addition of blessing tokens provides a good counterbalance to the randomness. If I make a lot of deals for blessing tokens then I can always ensure that I have a few of these on hand. This means that I am not forced into a position of having to hope for the best because I always have the option to guarantee success by using blessing tokens instead. The key words in that sentence are “have the option”. Because I have options, I have control. As much as the Aztecs are reliant on luck, playing them never leaves me feeling like I did poorly due to some game element that was out of my control. I always feel like my decisions mattered. Sometimes gambling pays off. Sometimes it doesn’t. But it’s always my decision and I like that.

Overall, the Aztecs is a very fun faction to play. When I’m at the helm I always enjoy myself. However, when you’re sitting across from someone that’s playing the Aztecs it might not be quite as enjoyable. The constant strings of Pray actions gobble up a lot of time and Imperial Settlers is not a game that provides you with a lot to do when it isn’t your turn. If you’re playing against the Aztecs and you pass your turn, be prepared to sit there for a bit while the Aztecs player finishes.

In summary, while the Aztecs do heavily rely on luck, the game still provides a good deal of strategic decision-making opportunities and overall control to counterbalance it. Other than that and the longevity of some of the turns, I have nothing negative to say about this expansion. As I said earlier, the Aztecs is my second favorite faction to play. If you’re a die-hard Imperial Settlers fan or even just new to the game, this is definitely an expansion you’re going to want to add to your arsenal.

Also, if reading about The Atlanteans and The Aztecs has got you excited, then keep an eye on Portal Game’s Twitter feed because they will be announcing a new faction on January 27th. Additionally, this summer they are going to be releasing a new Empire Pack (similar in size and nature to Why Can’t We Be Friends and 3 Is a Magic Number) called “We Didn’t Start the Fire“. You can bet I’ll be in first in line to snag my copies of these and that I’ll be writing up reviews, so watch out for that as well!