Hyperspace places you in the command chair of an ancient and advanced alien civilization fighting for control of newly discovered space.  Whoever gains the best foothold in this new area will have an undeniable advantage over the other races and will become supreme being in the galaxy.  These are no small stakes and the cast of factions is not small either. The full game will offer over 20 factions all that carry unique strengths and weaknesses.  Many of these races carry themes and ties from H.P. Lovecraft’s works which was a great head nod to another of my favorite Peterson games, Cthulhu Wars. 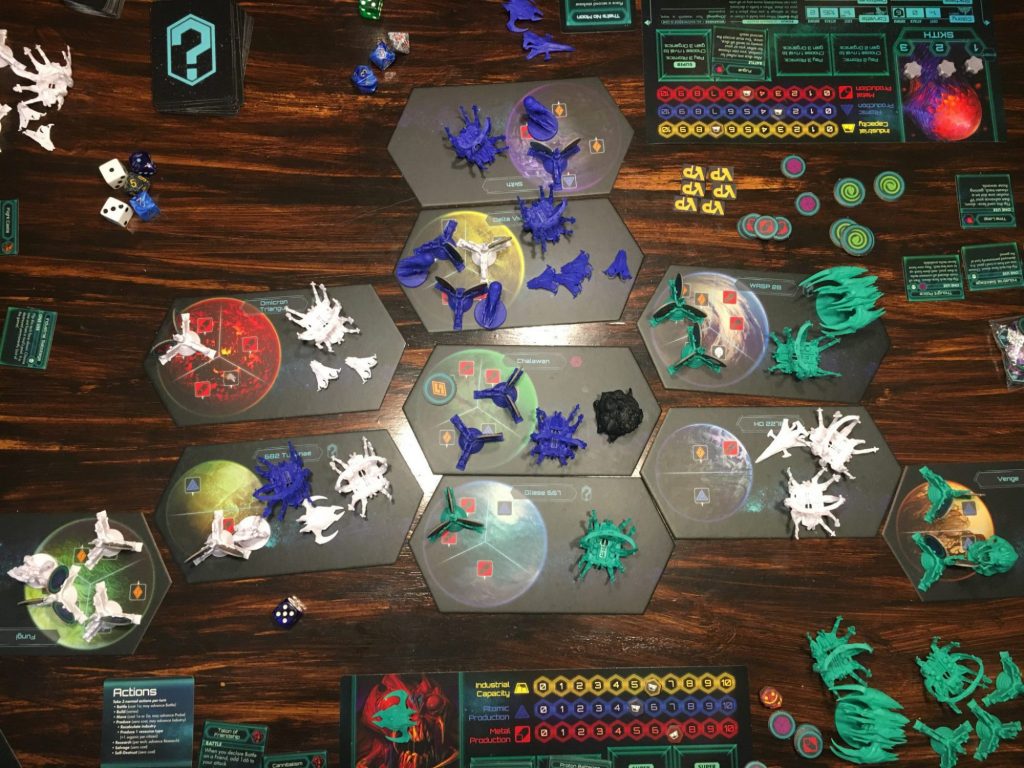 In Hyperspace each player is working to gain the most victory points (VPs) by completing various tasks.  You can gain VPs through destroying units when you attack, researching technology, gaining a powerful industry and exploring new areas of the map.  You play over a series of rounds until a player reaches enough victory points to end the game. These items are recorded on several “tracks” that you advance on and gain rewards by accomplishing various feats throughout the game.  At that time points are tallied based on your industry, hyper tokens collected and any secrets ( like elder signs from Cthulhu Wars) you may have collected throughout the game. Whoever has the most points is crowned the supreme being. 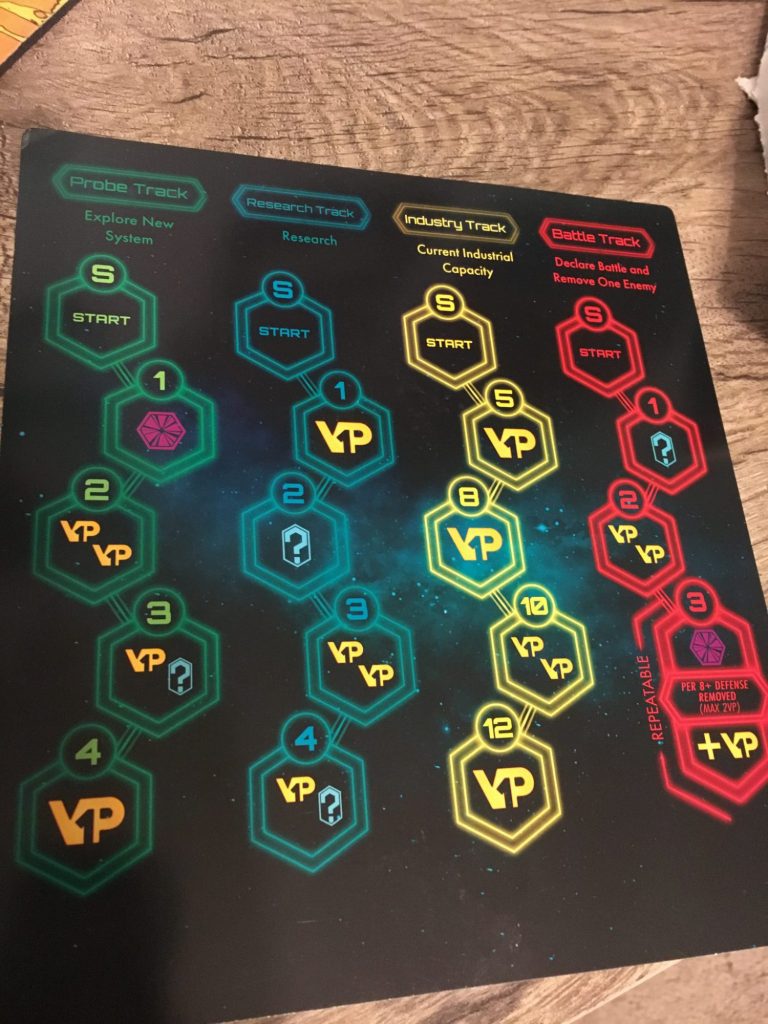 Players’ turns move quickly with each turn consisting of only 3 actions before passing to the next player.  A big and refreshing highlight to Hyperspace is the fact that there is no upkeep phase to slow down the game.  Turns play out lightning quick and keep the game clipping along to completion. I never felt like there was a great deal of lag or downtime such as you would experience in a game like Twilight Imperium.

Out of the three actions you get per turn there are generally 6 choices to pick from.

This one is pretty straight forward.  You can move any number of ships from one area to an adjacent sector.  This costs you an atomic which is your power resource in the game. If you are exploring a previously undiscovered section of space the cost goes up.  This is action functions as your basic mobility choice in Hyperspace and allows you to get your fleets where you need them around the board. The distance you can travel is effectively extended by the number of connected star bases you have so it always pays to build a big network when you can.   This action is the way you advance your probe victory track with rewards you for discovering new areas of space.

This action allows you to gain a certain amount of either metal or atomic units based on how many units you have access to on different continents of worlds.  You then will make a amount of the chosen product based on your industrial capacity. This number is determined by how many colonies and star bases you have in separate systems.  Also, your ground forces called citizens will produce organics which act as a wild card resource during the produce action. This is the main way to get resources for the research and build actions.  This action is the way you build your industry track as you gain more systems under your control.

With this action you can add a tech to your faction sheet from your common or racial pool.  At most, you can have two common and two super techs for any given game. To research a tech you must select the tech you want to research and pay the associated cost, usually an amount of atomics, and then select a rival to gain a certain amount of organics from the supply.  This action is interesting because while you gain something at cost, you are also granting free resources to an opponent. This starts to create a fun social game in Hyperspace as you can start to bribe and incentive player actions based on these rewards. This action is the main way you build your research track which rewards you as you unlock your tech.

This action allows you to build one unit from your pool and place in on the map.  You will usually be paying an amount of metal for the item being created but there are some factions and cards that get around that.  This is the primary way to get units on the board. One of the things I love about Hyperspace is the relatively streamlined way in which building can occur.  While there are still a few placement rules, for the most part if there is space available on a sector of space, you can put something there.

Salvage allows you to pick up any salvage or wreckage tokens on planets that you have a colony on as well as any hyper or secret tokens in space where you have a star base. Salvage is one of two common ways to get secrets in the game and that makes it very powerful.  Secrets are cards powerful effects that also grant hyper tokens or extra end game VPs. Also, salvage allows you to do is repair any ships that have been damaged in combat.

This is where the fun happens.  In battle you declare combat against one other faction in one sector.  All of your plastic takes part in the battle. Each faction rolls combat dice for all their units.  These dice range from d6 to d12 based on the units involved and then each side totals their rolls. Once each side has their dice total they each allocate their damage rolled and apply it to any enemy units they desire.  Each unit has a defense or “health” that must be met in order for that unit to be destroyed. If a unit has enough points allocated to it to meet its defense, it is destroyed. If partial damage is dealt to a unit, that unit is damaged and must be salvaged to be placed back on the map.  Some special units are considered fortresses and cannot be partially damaged. This action is the only way to move up the battle track as only someone who declares a battle and destroyed at least one unit is rewarded in battle. Defenders never get rewards in Hyperspace. 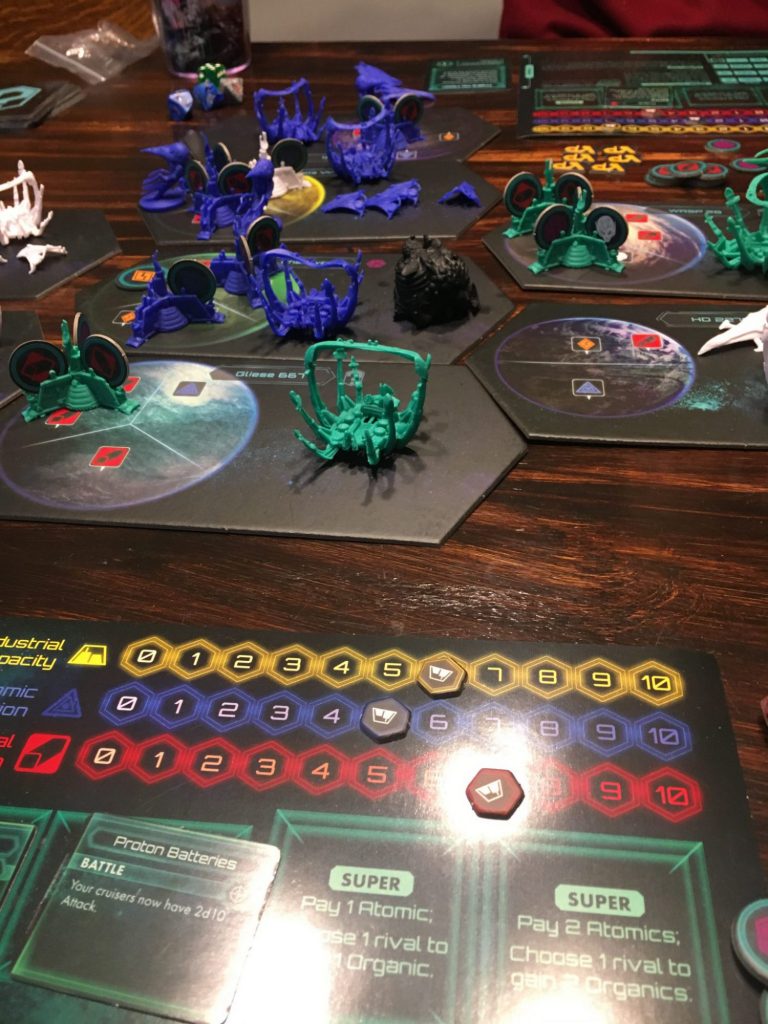 Hyperspace plays out very quickly with repeat players and simply churns around the table with each player trying to get ahead of the others on the various victory tracks by pursuing secrets and any edge over the competition.  One of the things I enjoy about Hyperspace is that, on any given turn, there are four or five things I would love to do but I am always forced to pick the three that will best use my turn. Choosing what actions to do on your turn is impactful too since you do not need ships in a sector to build. I often faced hard choices exploring a sector late in my turn as, while I would get the probe tack bonus, I was effectively opening the door for my competition to colonize whatever world I discovered.  This tug of war on the map was very enjoyable because you always felt like your neighbor was too close for comfort. There is no Risk Australia tactic available in Hyperspace and that tension adds to the game nicely.

Factions are very asymmetric and have a lot of flavor.  I loved how unique the factions felt but I also appreciated that, unlike asymmetric games like Vast, the factions were similar enough that you could quickly teach the game to new players with ease.  I think this blend is great as there is a great deal of replay value and the learning time commitment is not massive for a new player. 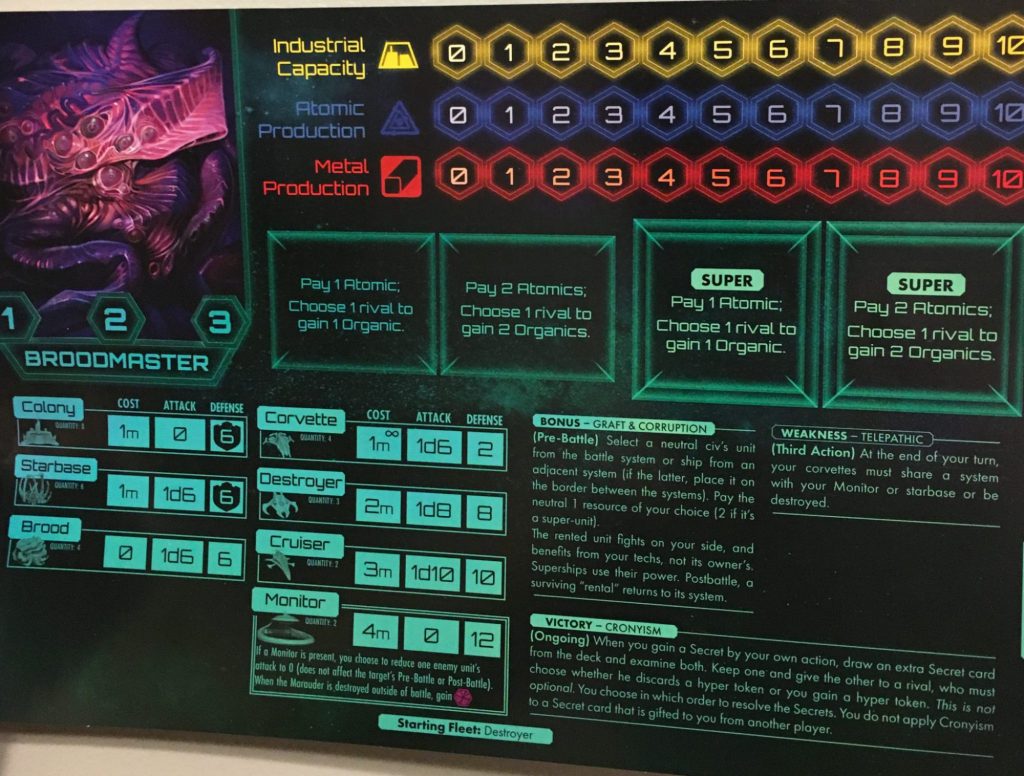 Hyperspace is a great, mid length 4x game game that scratches the itch of a large scale game without the time commitment ( right at 1.5 hours with experienced players) .  Each game feels unique due to the factions and random map which I believe adds a great deal the replay value presented. The resource management is very streamlined but that is not to say it is without depth.  I always found myself needing to evaluate what resource I needed next as I tried to plan out turns ahead. Combat is quick and relatively painless since the loss of units, while painful, is not as insurmountable as it can be in other 4x games. Technology was varied but presented in a way that did not follow a massive tech tree. I felt this offered a much lower entry point to new players than you often see in this genre of game.

While some may criticize Hyperspace and say it is simple to watered down, I look at this game as meeting a need that many of us have who love this genre. While I love bigger games like Twilight Imperium or even Empires of the Void 2, it is often difficult to find the time and players interested due to the time commitment and learning curve involved. I feel that Hyperspace is a deep, repayable game that is not so complex a new player has to invest an hour to learn. In Hyperspace, you don’t need to consider their first game “just a learning experience”; it is fun and engaging from the first play.

Overall, I loved my experience with Hyperspace and while I am excited to see the final rule explanation and factions I feel very confident this will be a hit game that will be on my most loved list right alongside his big brother Cthulhu Wars.

Cons:  Some Could Say Oversimplified, Combat Relies on Dice

If you love space, Lovecraft or 4x games, I assure you there will be something to love for you in Hyperspace.