Holmes, Sherlock & Mycroft review – The Explosion on the Thames

Early this morning, a tremendous explosion echoed across the Thames river; a column of smoke dimmed the skies near Westminster Abbey. The London police quickly identified and arrested Michael Chapman, a young Surrey man linked to anarchist groups.

Sherlock’s brother, Mycroft Holmes, has been tasked with determining whether Michael acted alone or if the deed involved more perpetrators. Fortunately for Michael, his Surrey parents engaged Holmes’ services to prove that Michael had nothing to do with this atrocious attack. I pray that we can find evidence to prove his innocence or he may be sent to prison for a crime he did not commit.

The Scene of the Crime

Holmes and I visited the scene of the explosion in hopes that we might find clues which the police overlooked. Mrs. Hudson prepared breakfast for us, and then we departed. 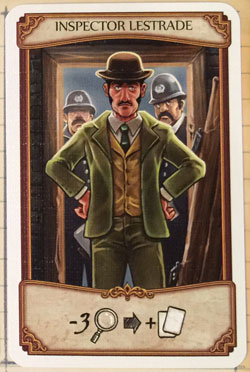 The area around Parliament was a disaster. The charred wreckage of carriages surrounded the building; the stench of burned plaster, horse hair, and worse permeated the air we breathed. Inspector Lestrade greeted us as we approached the site of the explosion. With thinly disguised impatience, Lestrade questioned our arrival. “This is a matter for Scotland Yard. Holmes, what are you about?” Holmes explained that our client had engaged our services to prove the innocence of the prime suspect. Impatient though he may be, Lestrade grudgingly allowed us access to the crime scene.

As we spiraled out from the center of the blast site, we strayed further away from the Yarders. Holmes, as usual, followed his intuition, but this seemed excessive even for him. Just as I started to suggest we turn back, he uttered a soft cry. Ahead of us was the entrance to an alleyway. Kneeling down Holmes picked up a cigarette from the ground and placed it in a small glass jar. He then pulled out his glass and carefully examined the ground. 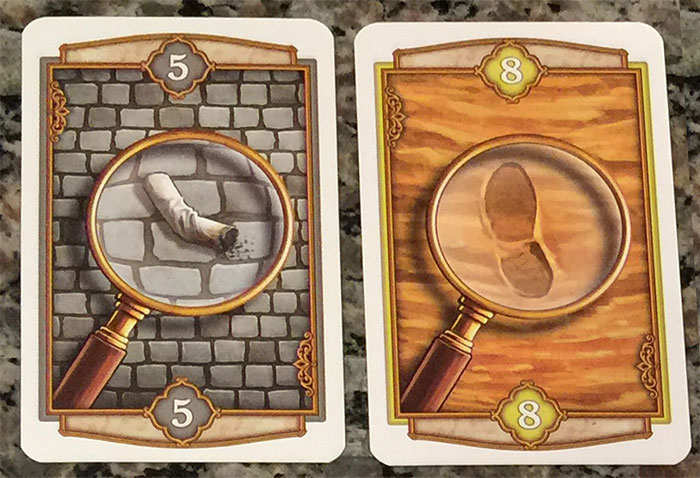 “Watson, do you see the pattern here in this footprint?” I looked closely and I could indeed see a small crescent shaped excision in the sole of the shoe. “I believe that a man stood here as lookout, Watson!” Turning back around, Holmes and I had a clear line of sight to the front door of the Parliament House. “I know not what it means, whether this was some common loiterer or something more nefarious. We need to speak to Langdale Pike.” said Holmes. And with that he turned and strode off towards our automobile. 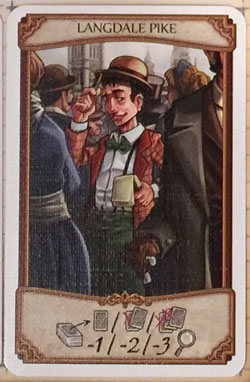 What to say about Langdale Pike? He is irascible, a dandy, a womanizer, and a man of questionable morals, but he is also a spider in the center of a web of London’s gossip and intrigue. If there’s a thing to be heard related to the comings and goings of men and women of…low character, then Langdale will have heard of it.

We arrived at the St. James club the next day in time for an early lunch. As Langdale generally kept late hours Holmes thought it best if we caught him early before his wit was yet awakened. Langdale was at his usual table in the corner allowing him to survey the entire room at a glance.

Before we could make our way to Langdale’s table, a whispered voice attracted our attention. Tucked into the shadow of the doorway was the small figure of Wiggins who gestured us towards him. Many of the rumors peddled by Langdale came from Wiggins. The guttersnipes, beggars, and pickpockets living on the streets of London saw everything. You’d never notice them, but they collected information like they collected wallets. All of that information came to Wiggins and then on to Langdale. 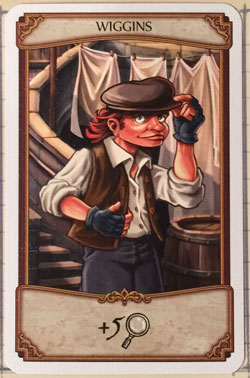 “You didn’t hear this from me guv’nor” said Wiggins. “Last night Shinwell was ‘collecting’ from some blokes what owed him money. When they couldn’t pay, they offered up some information about the chaps what did the Bonnie Night for the House of Lords.” In a hushed voice, Wiggins proceeded to tell us what Shinwell had heard.

“Thank you Wiggins” said Holmes. “Watson, pray compensate Wiggins for his helpful information. Let us continue our investigation with the details we’ve learned from this young man. I’m now more confident than ever that we’ll succeed in this case.”

Holmes: Sherlock & Mycroft is a light tactical set collection card game which casts players in the roles of Sherlock Holmes and his brother Mycroft. Both brilliant men on the opposite sides in the investigation of a heinous crime against the crown.

Over the course of 7 rounds players send their workers out to various notable individuals (worker spaces) on the board. Some spaces allow you to gather investigation tokens, while others allow you to collect clues which score you points at the end of the game. 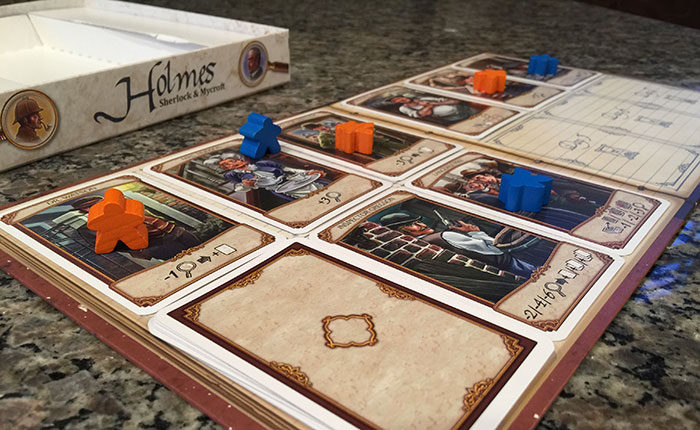 Each clue card has a number on it which denotes quantity of that card in the deck. The player with the most of each type of card at the end of the game will score that number of points minus the number of cards of that type owned by the other player. So for example, if player A has three sevens and player B has two sevens, then player A would receive 7 points, minus 2 points because player B has 2 of that card. 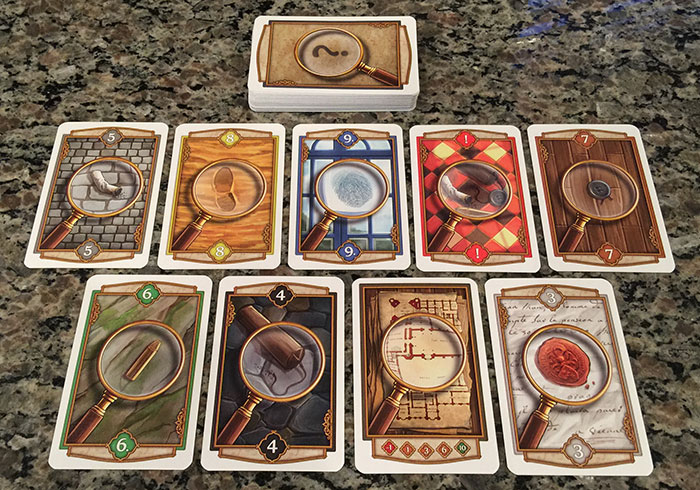 There are also map fragments in this game which offer a more traditional number of points for each increasing number of fragments: 2 map fragments net you 1 point, 3 nets you 3 points, etc.

It’s no secret that I enjoy two player games. I also love card driven games and worker placement games. Add to that list my love of a good Sherlock Holmes story and you can see why this game piqued my attention.

The scoring in Holmes is interesting and clever. Players will need to balance their need to score sets of cards with not having too many of one type. The game starts with only 5 workers spaces, but over the first 6 rounds new spaces will be revealed. Since the worker deck is shuffled at the beginning of the game, you’ll never know what order worker spaces will be revealed. Additionally, there are more cards than there are spaces which means that you’ll never be sure if the one you really want will come out. Unlike many worker placement games, the spaces in Holmes can be shared. That means you won’t have to worry about other players blocking your moves . However if both use the same worker space then that card is considered to be exhausted and is flipped over for the following round.

I learned so much about the Sherlock Holmes universe while playing this game and researching this article. Holmes is so ubiquitous that you’d be hard pressed to find someone in the Western World who isn’t familiar with him.

This game truly is a gem. It’s light, but challenging; and short, yet deep. Holmes, Sherlock & Mycroft is fun and just a little back-stabby if you add in some of the optional cards. If you’re a fan of two player games in general then you need to pick up this game. If you love the Sherlock Holmes mythos then you’ll want to get this today.

What do you think about Holmes: Sherlock & Mycroft? Give us your opinions about what you like and/or dislike about the game in the comments below!