The American frontier, AKA the Wild West, has always been a source of fascination in popular culture. Clint Eastwood made a career off of his portrayal in Rawhide, “Rough Rider” President Teddy Roosevelt popularized bad boy cowboy imagery, and the shooting prowess of Annie Oakley is legendary. Today, HBO’s Westworld portrays a world where customers can go to a western themed park where they can experience the allure of the Wild Wild West any way they want, from the saloons, to shoot-outs with fictional villains, to exploring the great plains. It would naturally make sense to incorporate the Frontier into a board game theme. Great Western Trail does just that, picking arguably the most boring part of the Wild West to focus on: shipping and delivering cattle.

But this game is anything but boring. 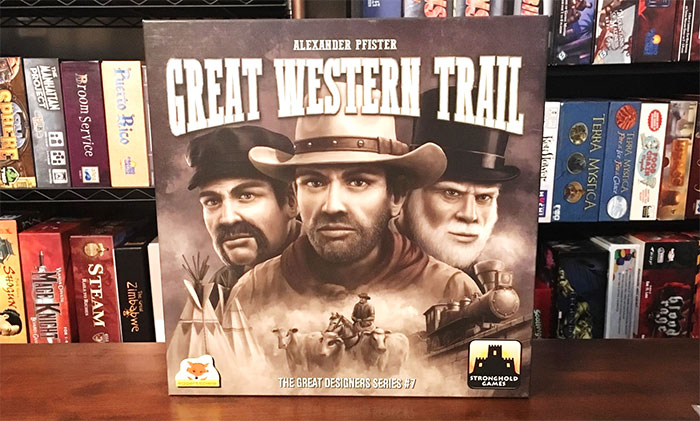 In Great Western Trail, 2-4 players compete to build buildings, buy cattle, hire staff, and make deliveries to Kansas City. The goal of the game is to collect the most victory points, which can be done in a variety of ways. Great Western Trail is the latest masterpiece of veteran designer Alexander Pfister, who has recently brought us Port Royal and Mombasa, and the 2015 and 2016 Kennerspiel des Jahres winners: Broom Service and Isle of Skye amongst others.

Taking the Reigns on the Great Western Trail

The most important part of your journey as a cattle rancher on the Great Western Trail is your player area. On your personal board you’ll find a series of auxiliary actions on the left side of the board, the details of your turn across the top, your certificates on the right side, and your crew in the center. 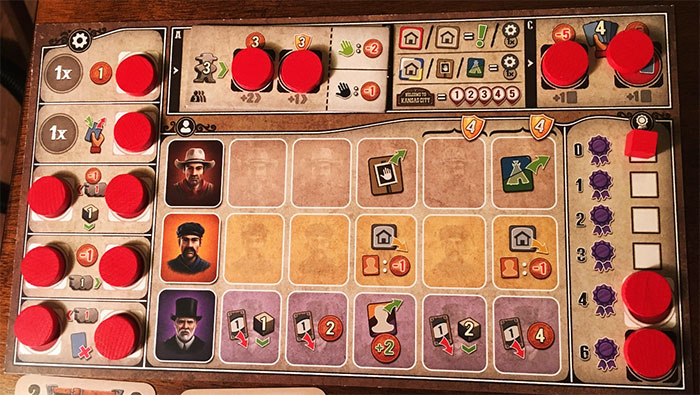 Taking a turn is simple and detailed at the top of the player board: you move your cattleman up to the number of steps allowed on your player board. After you’re done moving, you take the actions available on the space you landed. At the end of your turn, you draw back up to your hand limit. The actions you will take range from buying and selling cattle, hiring employees from the job market, placing buildings along the trail, trading with Indians, and many others.

Since your turns occur linearly along the trail, this only leaves certain actions available on each turn.

The final stop on the trail is Kansas City where you’ll be able to do five things which are outlined on the game board. The first three steps are re-filling the indian trading areas and worker supply. Fourth, you deliver your cattle to Kansas city, and fifth you ship them off on your train further into the wild west. 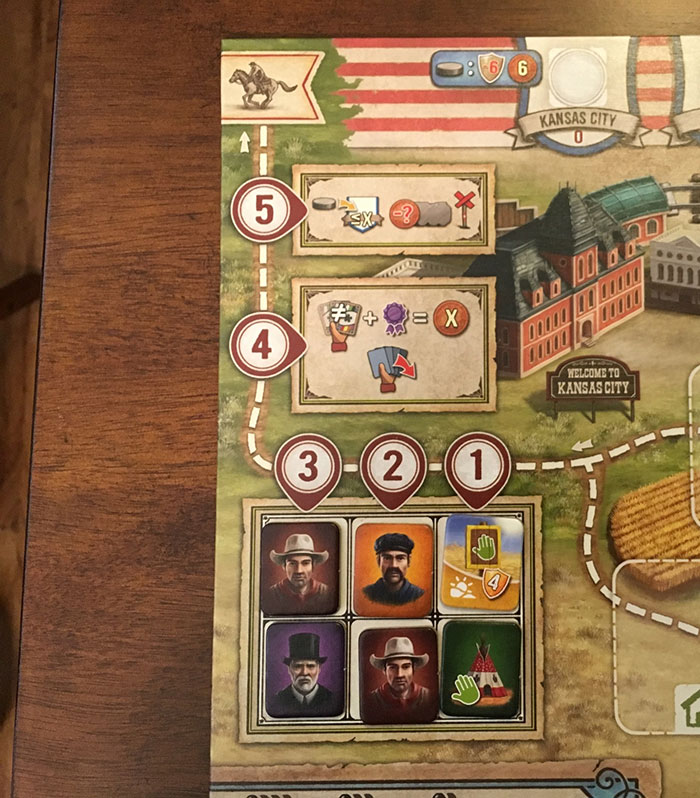 The first three steps in delivering to Kansas City are to add new hazards or Indian trading posts, and add new workers to the market to hire. The fourth step is to deliver your cattle to Kansas City. When you arrive, you deliver the cattle cards in your hand to Kansas City. You add the total number of points on the unique types of cattle in your hand and you add in certificates from your player board. You immediately receive that value in coins. The final step is to ship the cattle beyond Kansas City.

When you make the delivery, you use the total of cattle and certificates from step four and consider all of the cities along the tracks. The cattle can be delivered to any space along the tracks that has a value equal or less than your total. In order to complete the delivery, take one of the circles from your player board and place it onto the city. When you remove the piece from your player area it will open a new action, increase your hand size, increase your movement ability, or increase the number of certificates you can hold. Also, when you place your pieces into adjacent cities, you get bonuses, such as victory points or new objectives. The last step of making the delivery is to count the number of red “x”s on the track between your train and the city which you are delivering to. For each “x” you pay one coin to make the delivery.

One of the most important things you’ll be doing throughout the game is placing buildings onto the board. To place a building, you need to land on one of the spaces which allow you to construct new spaces along the trail. These buildings, denoted by your player color, provide only you with a new action. These spaces also may also force your opponents to pay you a toll as they cross it.

Each building requires you to have a certain number of craftsmen (the orange workers) to place it on the trail. If you have enough craftsmen, then you need to pay the cost for the building (typically two dollars per craftsman).

You’re also able to upgrade your buildings following the same procedure, but only paying the difference. So if you want to build a level 6 building by upgrading your level 4 building, you only need 2 craftsmen and to pay 4 dollars.

Each building also has two sides and the players all select which sides of the buildings to use for that play. 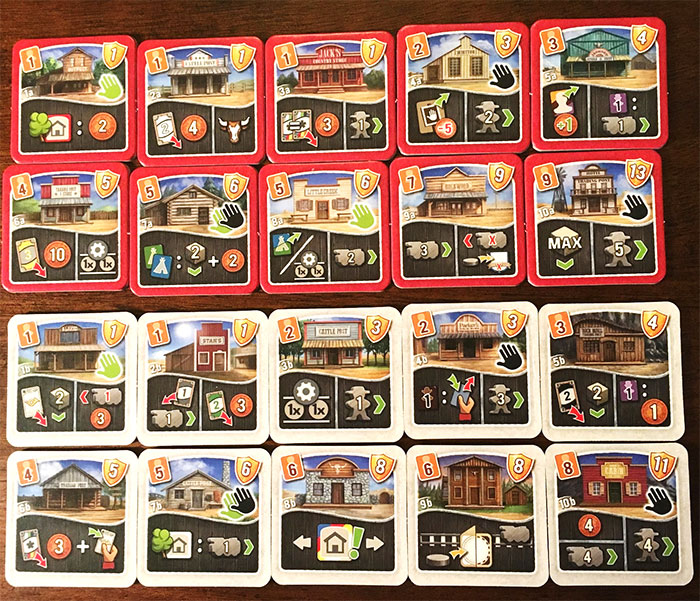 Did you know there were over nine types of cattle in the world with interesting names like Jersey, Guernsey, Ayrshire, and Texas Longhorn? Before playing Great Western Trail I sure didn’t. At the beginning of the game, each player’s deck consists of five Jerseys, three Black Angus, three Dutch Belt, and three Guernseys. 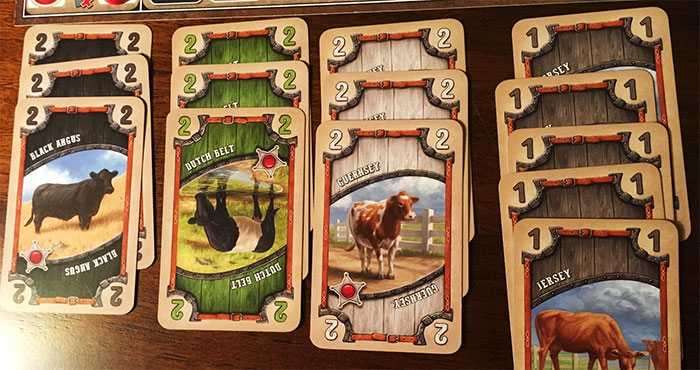 Several buildings allow you to buy cattle to add to your deck. Cattle cards are useful in two ways. First they all have a significant number of victory points on them, ranging from 1-7. Second they add more options and higher valued cards for making deliveries to Kansas City. When you land on a cattle-buying building, you can take your cowboys to the market.

You can exhaust your cowboys to buy any combination of cattle following the cost track at the top of the market. For instance, if you come to the market with three cowboys, you could buy one yellow, red, or blue cattle for three dollars and one brown cattle for 12 dollars.

When you land on a space allowing you to hire employees, you do so from the job market. The cost to hire a worker from the market is listed on the right side of each row. 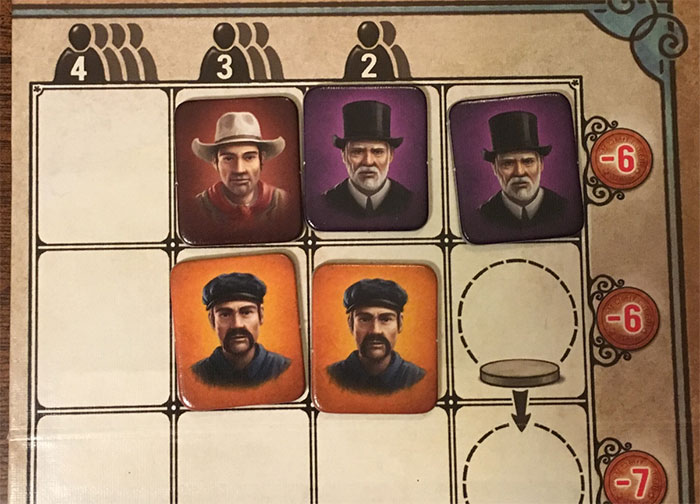 When you hire a worker, you place the tile into your player area. If it covers an action space you can immediately use that action.

Great Western Trail is a well designed game with multiple paths to victory. The different types of workers, craftsmen, engineers, and cowboys define the different strategies. The craftsmen let you build a network of buildings which you can use to optimize your path through the trail. The cowboys let you collect a large herd of cattle which score you victory points. The engineers let you build train stations further down the track, scoring valuable points. Each of these strategies can be used individually or can be layered together. It also seems like each of these approaches are well balanced. In my plays of the game, no strategy has seemed dominant.

The ability to tailor your particular path through the trail is a really interesting take on building an engine. As you set up your buildings, you are both interested in setting up your engine while also holding up your opponents.

The component quality is high throughout the game. The building tiles are nice, thick pieces of cardboard. The player pieces are attractive and nicely theme the game. The player boards are usefully set up, though they don’t contain all of the information that might be needed to understand the symbols of the game.

The game provides a lot of variability. First are the starting buildings placed on the map. The game provides a set of starting locations which are relatively easy to use and can be randomized. The structures available for building also can change from game to game, changing the value of different types of actions and strategies.

Great Western Trail scales well to different player counts. The game length scales by limiting the number of spaces in the job market, which also acts as the game clock. At higher player counts, players also get more spaces of movement, allowing the players to avoid other player’s locations. 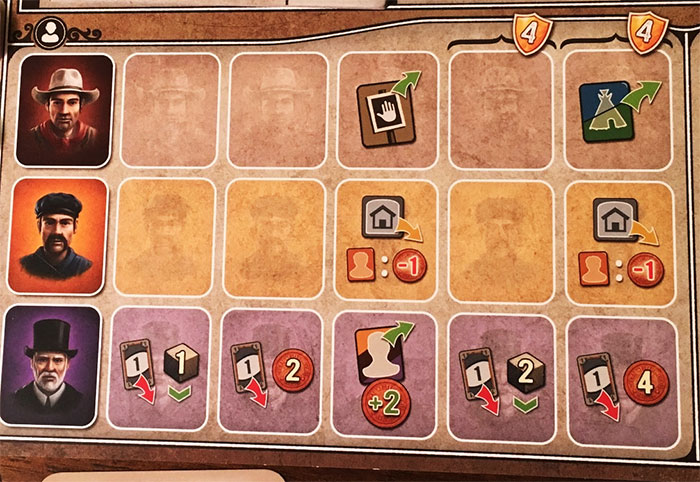 The biggest downside of this game for me is the difficulty of developing a strategy. At the beginning of the game, the number of options for play can be overwhelming. The game does provide you with a starting objective, but it’s minimal and doesn’t offer a strong direction. At the end of the game, it’s a point salad of sorts, since there are several ways to score. Fortunately a score pad is included to make that easier.

The other downside of the game is the limited player interaction. Hazard and trading tiles can be used to limit players, and structures can be built which cost players money. These means of interaction are minimal so if you like player interaction, you may want to look elsewhere.

Though there are a lot of options, the game can feel limited later in the game. After you spend your first few turns building up your path through the buildings, it’s possible that you will cycle through the locations in the same pattern for the remainder of the game. This isn’t always the case, but it can end up that way some of the time.

If you like heavier games, definitely consider seeking out a copy of this game. It’s hard to find right now, but definitely worth it. There are so many interesting aspects of the game that are worth exploring. Whenever I finish a game I can’t keep from considering different strategies I could have followed throughout the game and I’m excited to get it to the table again.

If you like games with more player interaction but still a euro feel, go check out Mombasa; also by Alex Pfister.

Teaching and learning the Great Western Trail is a little tricky, but once you get 1-2 turns in most of the rules make sense. Overall the game is great and I have not had any complaints from people who have played it.

Great Western Trail combines deck-building, variable action selection, and hand management into an exhilarating board gaming experience. Alex Pfister has been on a roll and Great Western Trail has seated itself as my favorite of his games. I highly recommend you check it out.