Ganymede Review – Where No One Has Gone Before

In Ancient Greece, while the mortal Ganymedes was tending sheep on Mount Ida, his striking beauty caught the eye of the powerful god, Zeus. It wasn’t long before Zeus was turning into (or summoning, depending on the tale) an eagle to abduct Ganymedes and bring him up Mount Olympus where he would spend the rest of his days among immortals. There he also officially served as the cupbearer to the gods. Lucky him.

When it came time to thank Ganymedes for his years of servitude, Zeus put the cupbearer in the sky as the constellation Aquarius. Many centuries later, Simon Marius, a German astronomer, named one of the planet Jupiter’s largest moons after Ganymedes— no doubt because it continued to serve Jupiter, Zeus’ Roman counterpart. It is from this that Ganymede the board game takes its name and theme.

In Ganymede, players take on the role of a corporation specialized in sending Settlers to colonize unexplored planets. The Settlers will journey from Earth to Mars and then to Ganymede, the largest of Jupiter’s moons, and the launch site of the exploration ships.

Ganymede is a simple engine-building game in the same vein as Splendor and Century: Spice Road. There are only a handful of straightforward actions from which you will choose each turn, but the depth of the game lies in the strategies the players develop and how they best build their engines.

To Infinity and Beyond 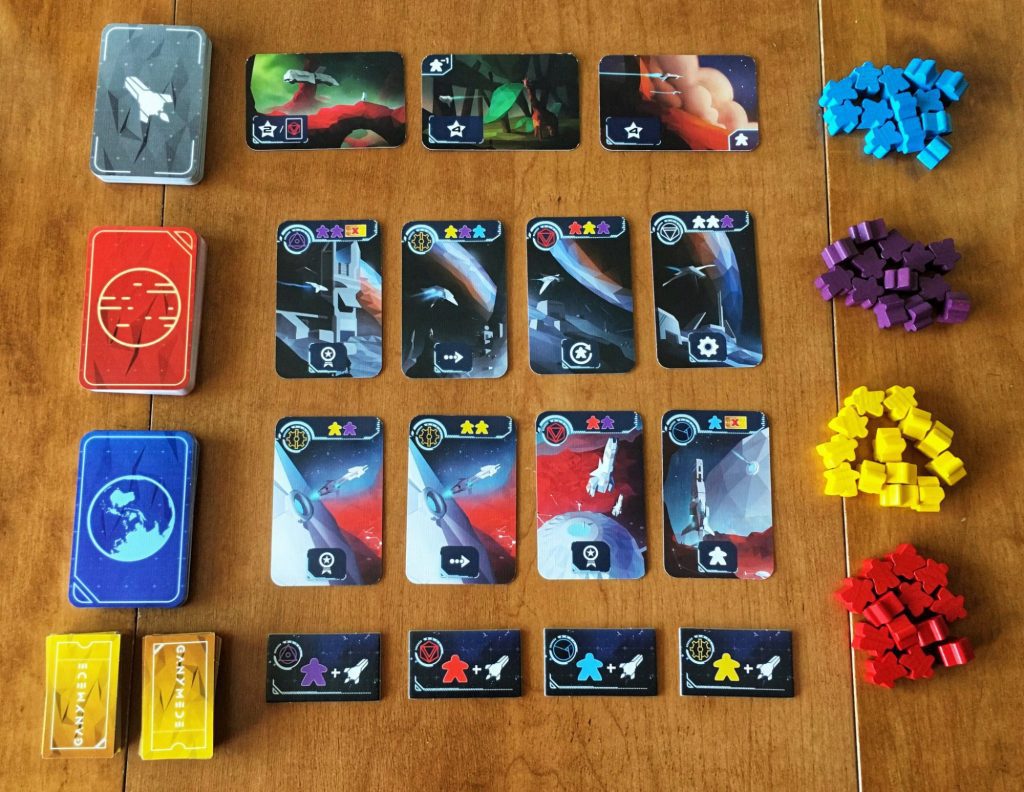 The flow of Ganymede and the journey of a Settler is simple (and nicely laid out on the player board):

The game’s end triggers when either the Earth or Mars deck of cards is empty or a player has launched their fourth ship.

On a player’s turn, they perform one of the three possible actions listed on their player board. The options are:

For this action choose a faceup Settler tile from the display and add it to your player board, resolving the tile’s ability. The four starting Settler tiles have two abilities (gain a Settler and draw a Ship card) while all the other tiles give you a choice between one of the depicted abilities.

Along with the ability, each Settler tile also has a coloured icon. These icons allow a player to multiply the effects of their chosen Settler tile if they already have tiles with the same icon.

In this example, the player has chosen a new Settler tile with a red icon. Since they already have one Settler tile with the same icon on their player board, they may resolve their chosen tile’s ability twice by taking two red meeples, two yellow meeples or one of each.

Each player is limited to only 3 Settler tiles at any given time, but they may freely discard an old tile to make room when taking a new one.

Use a Shuttle card to move Setters

Once you have assembled enough Settlers on Earth (up to a maximum of 6), you may move them using a blue Earth Shuttle card from the faceup display. In order for you to use the Shuttle you must have the right Settlers already on Earth. The required Settlers are listed on the top of each Shuttle card. 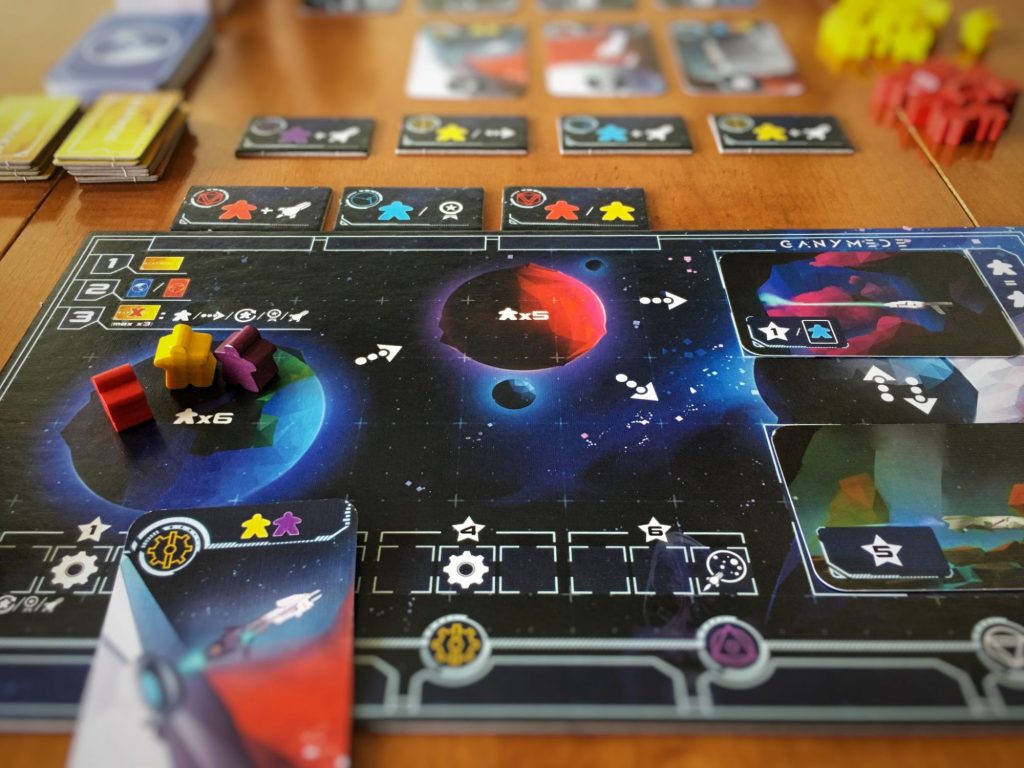 This player may take this Earth Shuttle card because they have a yellow and purple Settler already on their player board.

The required Settlers then move from Earth to Mars and the chosen card moves to the bottom of your player board under the appropriate coloured icon. Then the ability on the bottom of the card is resolved. Similar to Settler tiles, if you already have cards with this icon, the newly added card’s ability will be multiplied. 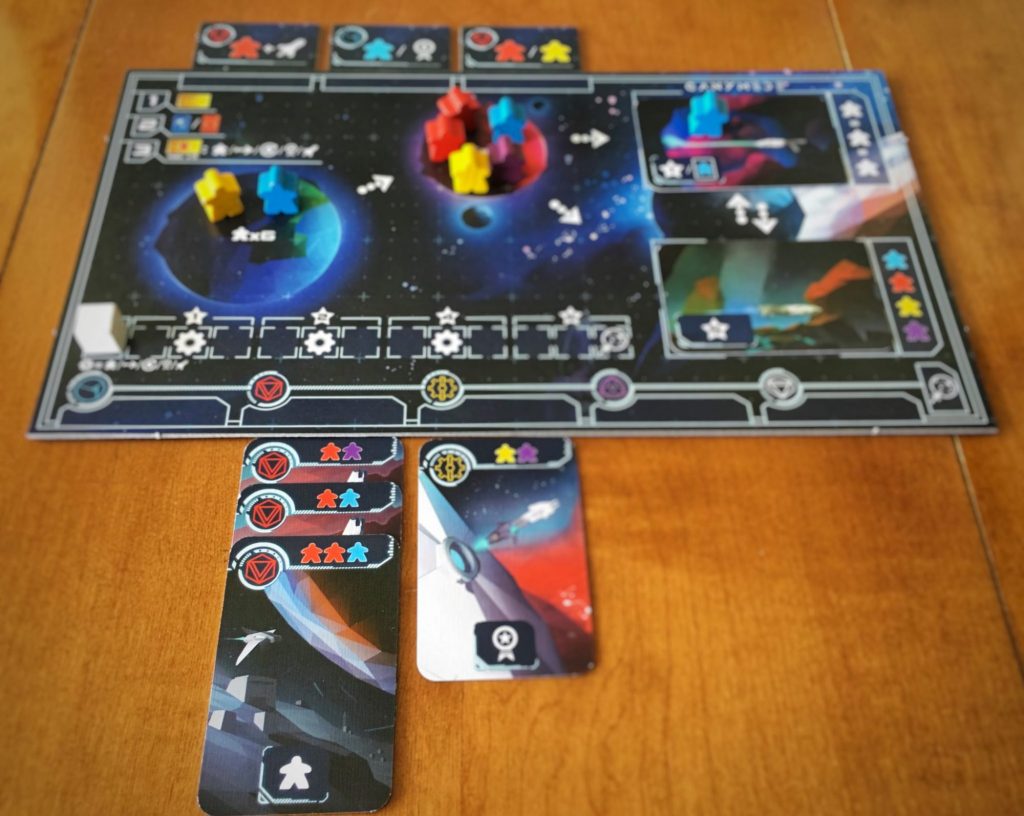 This player already has 2 red Shuttle cards so they activate the new card’s ability three times, taking 3 Settlers of their choice: one for the card itself and two more for the 2 red cards they already had.

While having Shuttle cards with the same icon improves its multiplier, it is also beneficial to diversify and use cards with different ones. For each set of 5 differently coloured Shuttle card icons in your tableau you may launch one of your Ships, even if the Settler requirement has not been fulfilled. When timed well, this can be a powerful and lucrative bonus ability.

The red Mars Shuttle cards work in the same way as those from Earth, but instead the Settlers must come from Mars. They then move to one of the two Ship cards, following the ship’s requirements (as noted to the right of each Ship card). 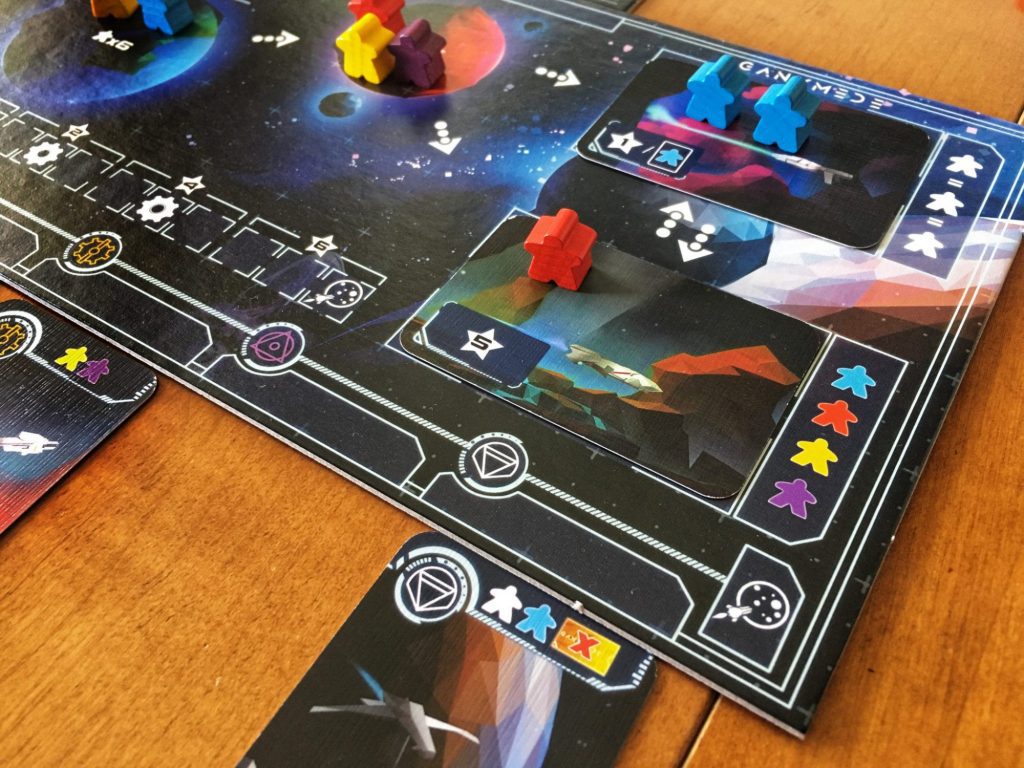 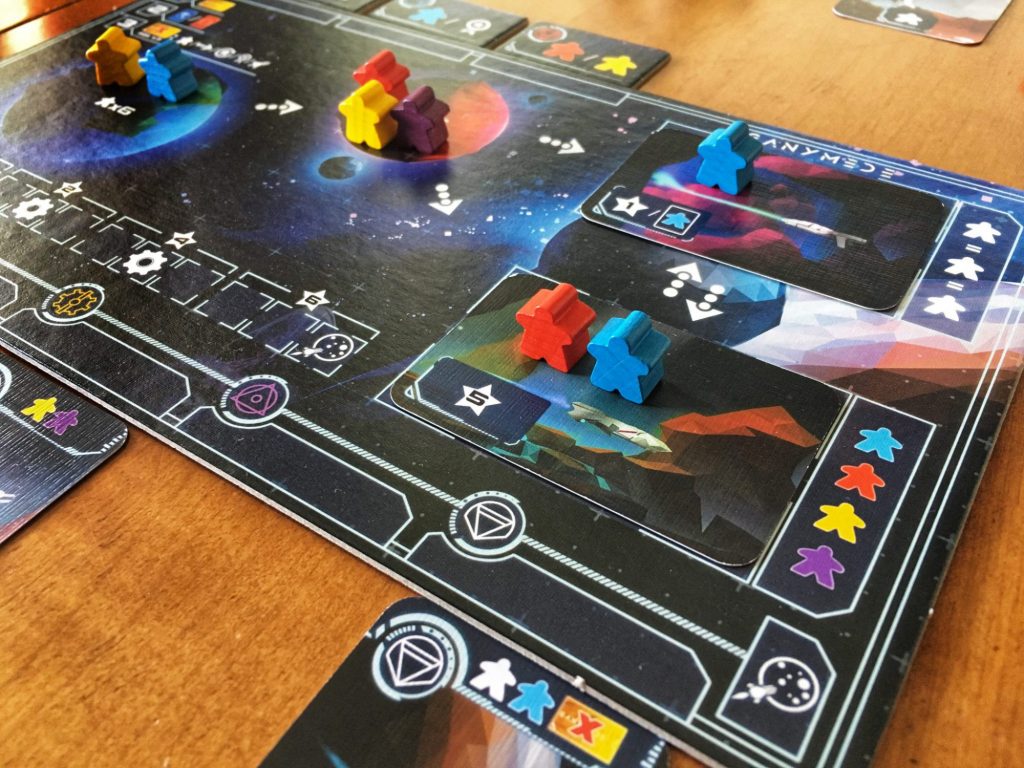 They could also move both Settlers to the bottom Ship card since it requires one of each colour of Settler. However, they could not move both to the top ship since that ship requires 3 Settlers of the same colour only.

Each ship’s requirements are strict: you are never allowed to ignore them or add more Settlers than the ship can hold. If a ship has met its requirements it launches at the end of a player’s turn and the Settlers on it return to the supply… I mean venture out into the vast unknown forever.

In times of desperation, you may discard 1 to 3 of your Settler tiles to perform 1 to 3 basic actions (pictured below). You’ll want to avoid using this action if you can help it since it can be important to keep Settler tiles to trigger bonus effects. However, sometimes you might have a stubborn Settler who refuses to leave Earth and a basic action is the push they need to be on their way. 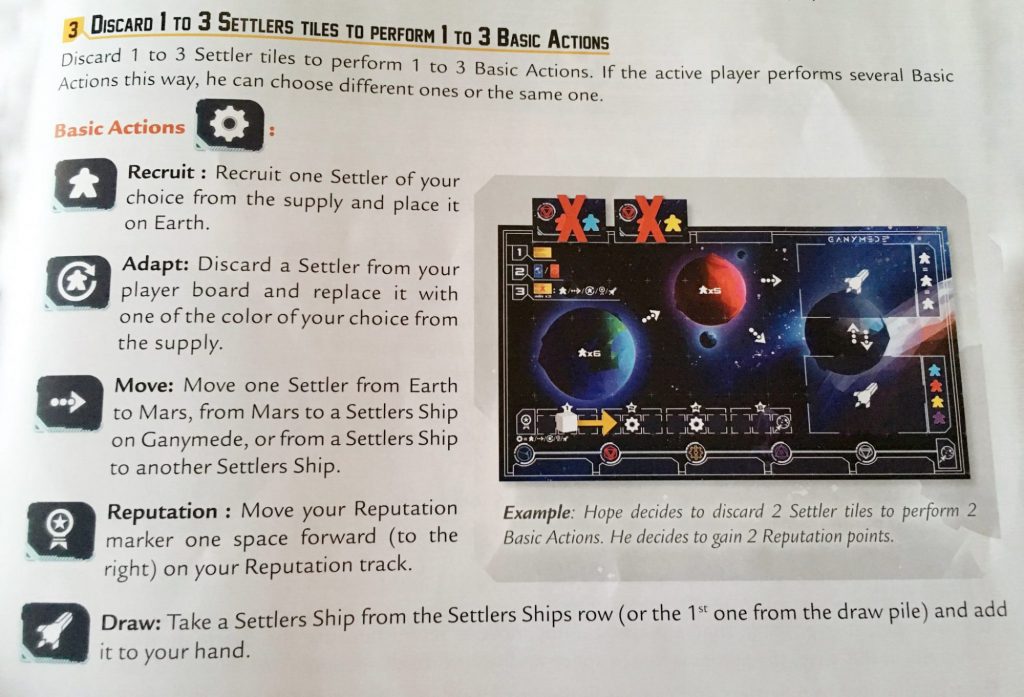 The reputation track (as pictured in the example above) will score endgame points. It might also give you a bonus basic action during the game if your cube’s movement ends on a cog icon.

Similar to Hope S. Hwang’s other game, Guildhall, I’m concerned that Ganymede will fly under the radar, not receiving the praise or reaching the levels of success I think it deserves.

Ganymede is a charming, simple-looking, engine-building game with stunning isometric artwork and straightforward actions. But my goodness, don’t let that deceive you into thinking the game is easy: Ganymede can be a beast that melts your brain after 45 minutes of nothing but carefully calculated moves. I have witnessed Ganymede break some of the best board game players I know. I mean this in the most loving way because I do really enjoy Ganymede. Nonetheless, I want to emphasize how strategic it really is; there is little room for error in this game.

If you want to do well in Ganymede, each action requires careful planning; one wrong move or wasted action really sets you back. Since the game plays so quickly and is so tight, there isn’t time to dilly-dally and experiment with multiple strategies within a single game. You must make a plan and stick to it. This is why I find Ganymede so brilliant. I can, however, understand how this could also be troublesome for some gamers. A game this tight and restrictive could feel too punishing; you won’t lose points, but you’ll certainly see your mistakes reflected in the final scores.

One of my favourite parts of Ganymede is the tension it simulates. It’s as if you are playing a racing game since a player launching their fourth ship triggers the final round. You are always aware of other players, which actions they take, how they are crafting their engine, and how they are using it to launch ships efficiently. Unlike many traditional race games, the player to do this won’t necessarily win the game. Perhaps they’ve used ships that require fewer Settlers (and thus don’t score as many points) or maybe they were too focused on just launching their ships that they didn’t build up their tableau for endgame points. The game balances this very nicely so players can focus on the engine-building rather than just the race to the end. 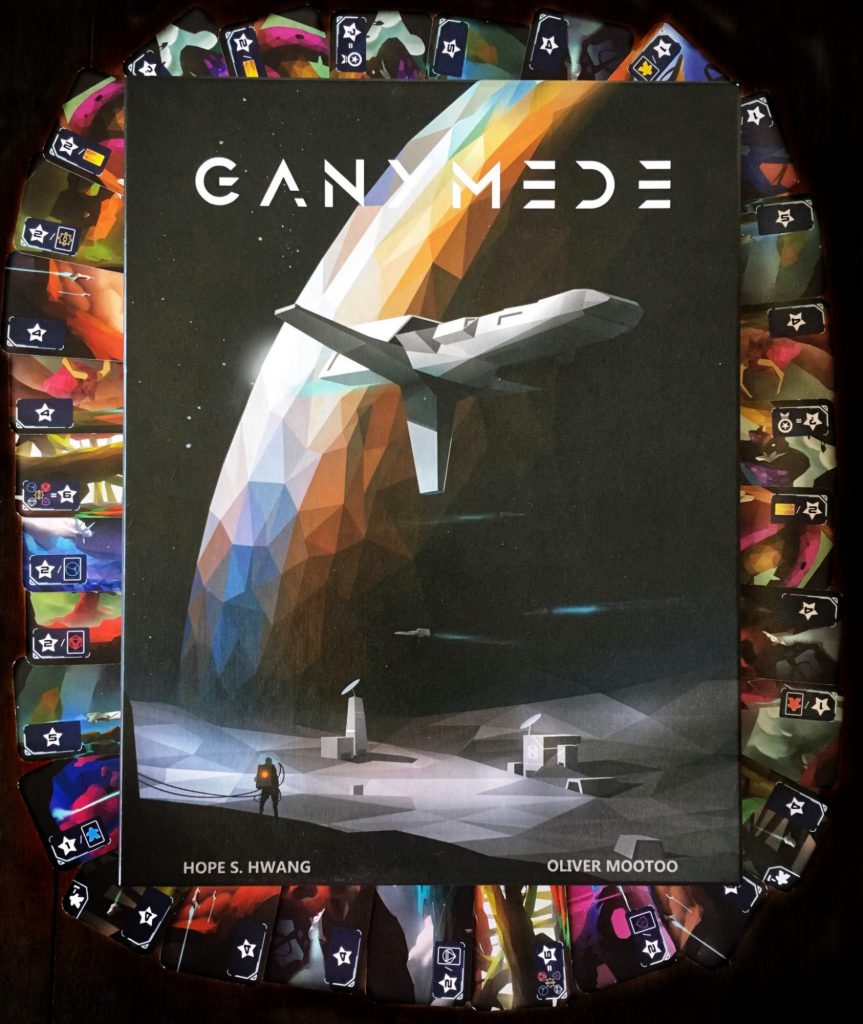 Ship cards in Ganymede score points in a variety of ways: straight points, points for Settler tiles, Shuttle cards depicting a specific Settler colour or icon, or additional points for your progress on the reputation track. Some Ship cards also give launching discounts or bonuses.

My main concern with Ganymede was whether it would be colour-blind friendly. The cards, player boards, and tiles have unique coloured icons, but the Settler meeples have no distinctive features. I tested the game out with some colour-blind friends and, to my surprise, the colour of the Settler meeples didn’t affect their gameplay because the shades were different enough that they were distinguishable. Bear in mind, there are different kinds and degrees of colour-blindness, but I don’t think that this should be a reason to hold you back. I like to think Sorry We Are French (the game’s publisher) made a conscious choice to try to make the game colour-blind friendly. If only more publishers were as thoughtful.

My only complaints about the game are minor ones: the starting Settler tiles and the rulebook. The four starting Settler tiles have the same back as the other tiles and their only differentiating feature is the plus sign on the tile itself. Is this the end of the world? Certainly not. It’s just more annoying than anything, especially since the fix seems so simple. Then you have Ganymede’s rulebook which has been translated into three languages and it’s clear that the original language was not English. Thankfully the rulebook is organized well, otherwise this would spell disaster. However, there are areas in which the translation is wordy and the explanation is unnecessarily long that it leads to rules questions that aren’t outlined in the English rulebook. The good news is if you are French, the rules are perfectly clear and unambiguous. (I can’t speak to the Korean version of the rules.) The English rulebook shouldn’t be a deal breaker though because all the rules will come together once you jump into your first game.

Ganymede may not be the latest game to hop aboard the hype train, but by golly, is it ever deserving of a seat! Don’t believe me? Check it out for yourself.