In Flip City, players take on the role of city planners attempting to build the most efficient city possible. Players build, develop, and flip properties in their city to achieve this goal. The first player to earn 8 victory points, or satisfy other specified win conditions, in a single turn is the winner. We also have a review of the Flip City: Reuse expansion.

How to Set Up Flip City

Setup for Flip City is straightforward and quick. Separate all the cards into distinct piles, with the following sides face up. Central Park, Factory, Convenience Store, Hospital. The Office cards are an optional “mini-expansion”, but I always include them. Place each stack in the middle of the table within reach of all players. The Residential cards will only be used to build starting decks and are not placed in the center of the table. 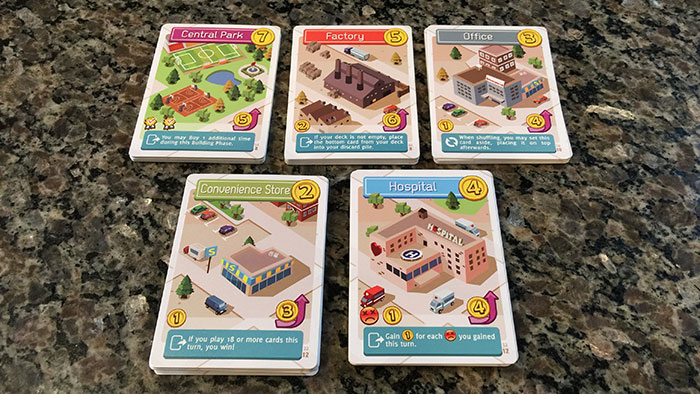 From the piles of cards, give each player a starting hand made up of the following cards: Hospital (1), Convenience Store (1), Central Park (1), and a Factory (1). Additionally each player receives Residential cards (4), and an Apartment card (1). 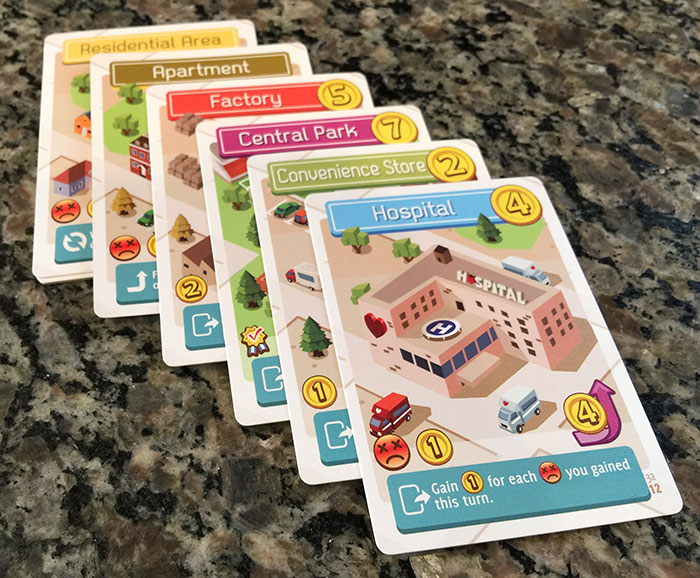 Select a starting player and the game is now ready to begin.

How to Play Flip City

Flip City is a deck building game in which players lay down cards from their hand which display various icons such as cost (to purchase the initial card), income (what you’ll use to purchase additional buildings), additional functionality (giving players bonus features), victory points (one way to win the game), and unhappiness (too much unhappiness and your turn ends immediately). Unlike other deck builders in Flip City you’re always holding your entire set of cards in your hand (not counting cards discarded in previous turns).

On their turn, if a player has not already shuffled their cards, they should do so now. The cards in Flip City are double sided which means that care should be taken to always maintain the current face up orientation of each card. Turns are broken down into 2 phases.

Players may stop at any point in their turn if they have fewer visible unhappiness symbols than the current allowed level (at the beginning of the game, this is 2). If a player ever exceeds the current unhappiness level, their turn is over immediately and the cards played in that turn are placed into the discard pile.

From the income gained in the Play cards phase players will be able to select 1 of 3 actions.

Because there are only 6 actual cards in the game, each with 2 sides, we’re going to review each card to see what they do. But first a quick look at the anatomy of a card (taken from the Flip City rules). 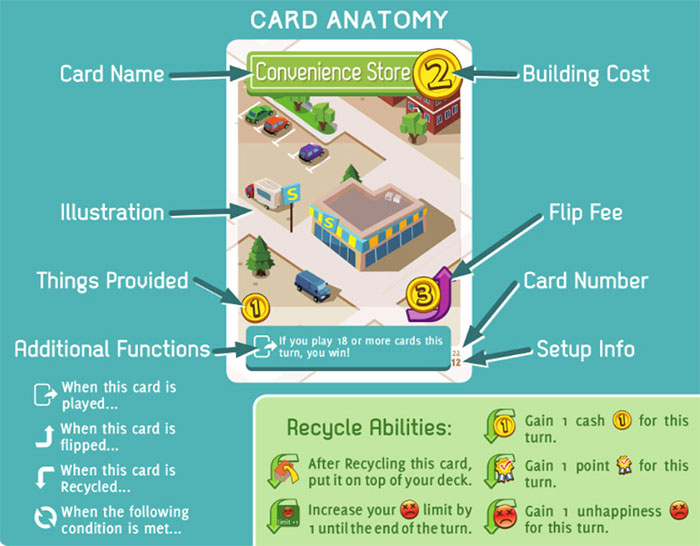 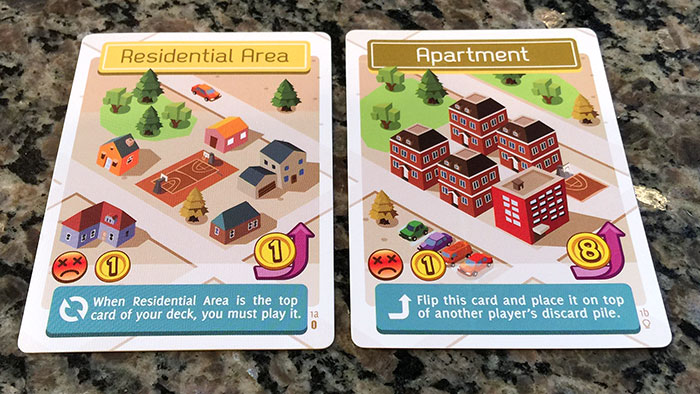 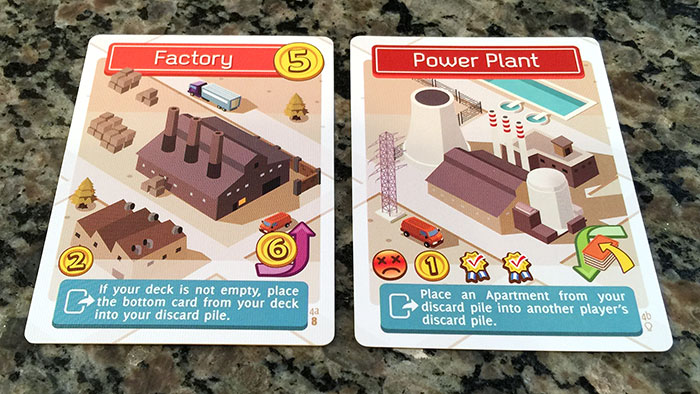 The Factory card generates nice income, but requires you to discard the bottom card from your deck each time it’s played. Don’t forget. The Power Plant card adds unhappiness, but it’s feature allows you to place an Apartment card from your discard pile into the discard pile of another player. Additionally it provides 2 victory points. Hurray! 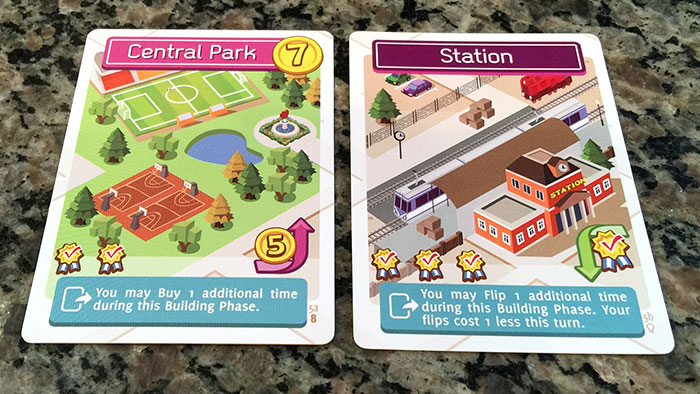 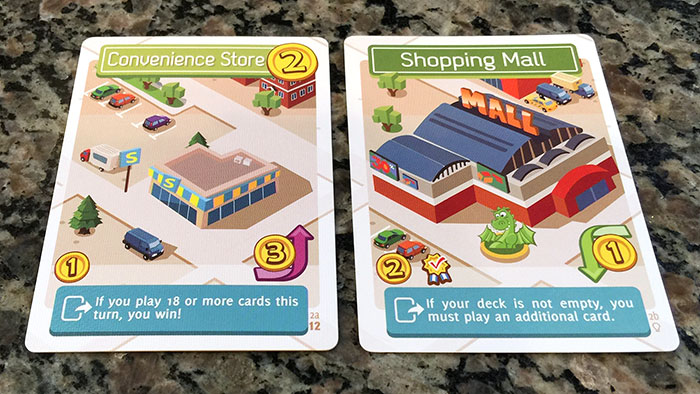 The Convenience Store provides a modest income, but gives the player an additional win condition. If a player can lay down 18 or more cards in their turn without exceeding their unhappiness level they win the game. The Shopping Mall gives income AND a victory point. A nice combination! 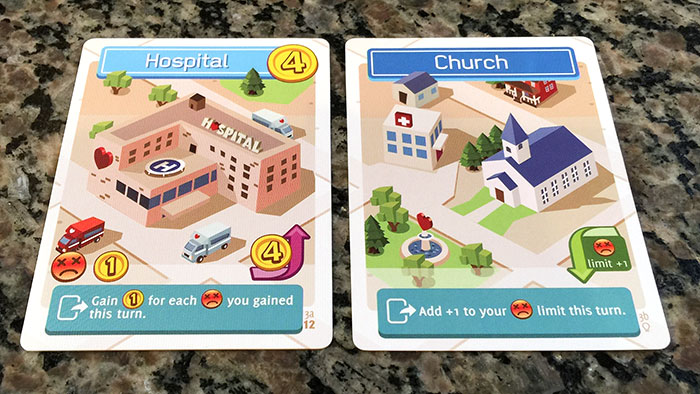 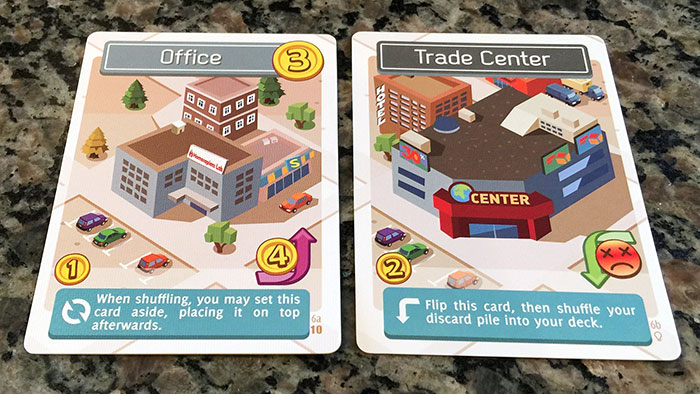 Office cards provide a safe haven for players looking to generate reliable income. Their feature allows them to be placed on top of the players deck after a shuffle. That means that if you have 3 office cards a player knows they’ll earn at least 3 income (assuming they don’t bust). Trade Center cards offer a solid income.

Flip City is a unique game, like nothing I’ve ever played. Yes it’s a deck builder, but because cards are double sided, the game has a scarcity of components, a press your luck feel, and an urgency to it…always wishing that you had just one more coin!

The graphic design and illustrations are simply fantastic. You’ll see something new each time you look at the cards. The text is easy to read, the icons are nice and crisp, and the cards are durable and thick.

What I Dislike About Flip City

The box is solid and well made but for some reason the publisher chose to not include a divider (at least in the copy I purchased). This forced me to rubber band the cards together. Not a huge deal, but for a small box card game a divider would have been nice.

The rulebook is full color and includes illustrations of every card, but it’s laid out oddly. The way it’s folded makes it a little tough to read in order. Additionally, some of the rules could be explained a little more clearly.

In the top right corner is a diagonal line facing to the left. Because of it’s placement at the the very edge of the card, almost every time I look at it, I think that the card has a crease in it. You might never have noticed it, but once you see it, you can’t think of anything else. I recommend that future printings of this game remove that line.

All in all, Flip City is a solid game. Fun to play, interesting to look at, and offering a number of different strategies to win. Will you flip over playing Flip City? Only one way to find out!

Read our review of the Flip City: Reuse expansion.