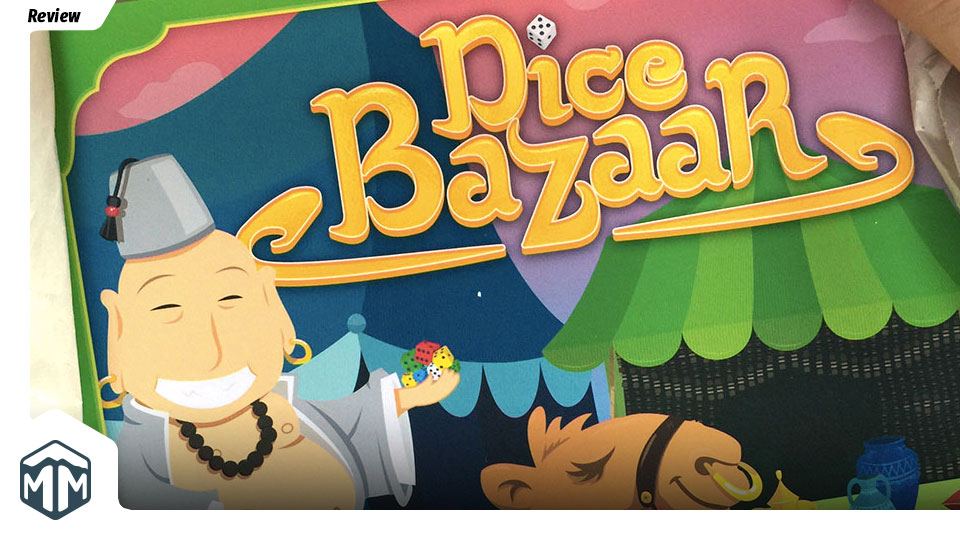 Dice Bazaar, the second game from Fedor Sosnin’s Disruptive Inc., is a visual treat, even as a prototype. Full of delightful colors, friendly shapes and characters, and dice…lots and lots of dice. In Dice Bazaar players compete to purchase products from a merchant by rolling dice and matching their faces with corresponding dice found under each product. The products found in the Bazaar are spices, tea pots, pottery, and gems. Each product card displays a point value, and a special ability which players can “spend” during a later turn. The point value of each card roughly equates to how difficult it is to purchase that card. Spices only require 2 matching dice, while gems require 5.

How to Play Dice Bazaar

Players roll the dice in their color at the beginning of their turn and can either purchase a product outright by matching the correct number (and faces) of dice, or by “setting aside” dice on their player board to be used on a later turn. When a product card is purchased, that player will take that card, then reroll all of the dice found under that particular product. Dice previously set aside by opponents which no longer match the new merchant dice should be removed. 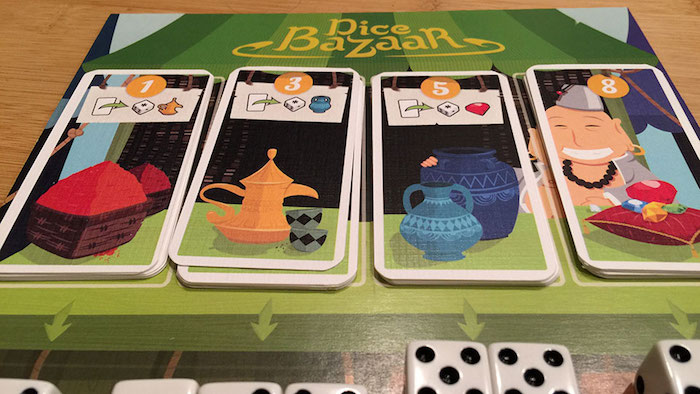 The game is over when any two products have been completely sold out at the Bazaar. Players will add up the point totals of their remaining product cards and whomever has the highest point value wins the game.

The art is beautiful and the colors are gorgeous and bright. The game has very clear iconography and instructions and the rules are well laid out and easy to read. The game states that it’s for ages 6 and up, but I’d wager that my 4 (almost 5) year old wouldn’t have any problem playing this game. The dice are 16mm so they feel good in your hand and have some heft to them. The gameplay is engaging without being deep or complicated. The special abilities on the product cards help alleviate the pure luck aspect of a game like Roll For It. 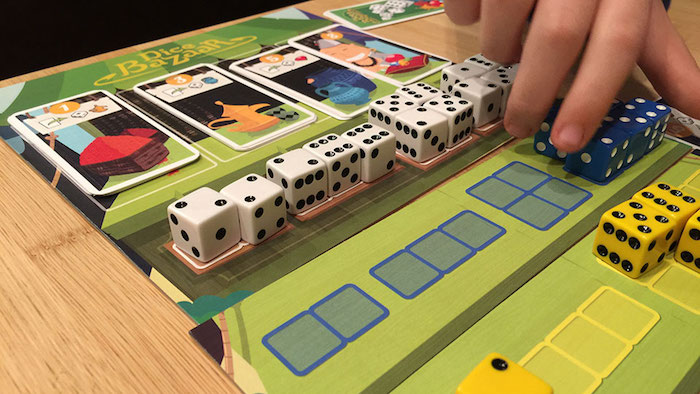 Dice Bazaar is very easy to play, and with only a single sided sheet’s worth of rules, easy to learn as well. My 9year old daughter and I were playing the game within 5 minutes of opening the box. There was only one time where we had to seek clarification on the rules. I asked on Twitter (whether you lost the points from cards which are traded in) and Fedor answered me within 10 minutes.

What I Dislike About Dice Bazaar

This is a push your luck style game with dice. This means that the gameplay is almost wholly dictated by your luck. The special abilities on the product cards help, but it’s still present. While not strictly a criticism, it would be cool to see some variance on the special ablities, either having each card of a product stack offer a different ability, or by having each product ability be a variation from the others. This would increase strategy because you’d have to choose if you wanted to purchase that specific version of the card, or wait until someone else took it.

Fedor puts a lot of time into his designs and it shows. The box and components are very pleasing to the eye. I’ve been informed that the final version of the game will actually have translucent dice which will make the game even more attractive.

If you’re looking for a simple game to play with your friends, or kids, or non-gamers then you can’t go wrong with Dice Bazaar. If you’re a gamer into heavier fare, then you might not find much to meet your needs.

Check out Dice Bazaar on Kickstarter.