Several months ago, we wrote a First Take on the critically acclaimed primal punk role-playing game, DeGenesis: Rebirth. This beautifully designed new edition of DeGenesis, published by SIXMOREVODKA, is an easy to understand RPG system wrapped in an incredibly dense post-apocalyptic world. If you are looking for a Mad Max setting of wild, tribal warriors and corrupted technology this is the game for you. The themes depicted are definitely mature but the level of detail put into this chaotic world back up the need for these themes. 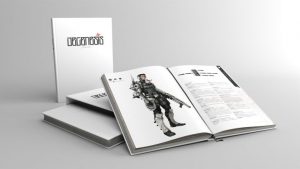 If you are unfamiliar with the mechanics of DeGenesis, it’s actually very light and simple. The system, called KatharSys, is a comparative dice pool rolled against a difficulty class to accomplish tasks. Each character has six attributes. Six skills are associated with each attribute. The scores for the attributes and skills are determined through point-buy at character creation. The attribute score combined with the skill score determine the Action Number which is the number of six-sided dice rolled to attempt that task. Each die that scores above 3 is a success. Depending on the difficulty a varying number of successes are needed to accomplish the task. Additionally, 6s count as Triggers. On a successful action, the number of Triggers rolled determines how well the task is accomplished. A success with no Triggers is passable where a success with 6 Triggers is legendary. In the event of a failure where there are more 1s rolled than the number of successes the character has botched their attempt and the action attempt takes a turn for the worse. You may roll against another character, you may cooperate with a character. There are also combination actions requiring different skill  rolls and complex actions that require a series of checks to be completed. These are all variations on the core mechanic which allows for skill and chance but at the same time does not get in the way of the story. 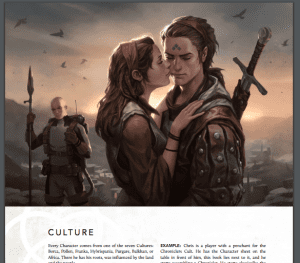 Characters are built with a culture, concept, and cult. The seven cultures define who and where a character came from. The culture defines attribute and skill bonuses as well as which cults are most likely available. The 22 Concepts are Archetypes that define the character’s personality and also convey a bonus. They are based on the MajorArcana of the Tarot. Cults are organizations that the characters belong to. Some are actual cults and some are more organized for mutual survival. Characters have a rank in the cult and climb the ladder as they progress. This conveys additional abilities as they attain a higher rank.

There are few additional calculated skills that determine their alignment in the world. Primal vs Focus and Faith vs Willpower. Only one from each pair may be chosen. There is also a renown score, a resource score, etc. These all help determine how you interact with the world around you. You can choose to be an insular naval-gazer looking for your own strength or  a zealous warrior determined to drive the darkness from the world with the strength of his faith.

To assist players in exploring the world of DeGenesis, SIXMOREVODKA has published Jehammed’s Trilogy, a series of books that are each one part world expansion and one part adventure module. The first book, In Thy Blood, details the region of Purgare, once Italy, and sets events in motion. The second book, The Killing Game, is set in the south of Franka, formerly France, and escalates towards the final climax in Black Atlantic.

Black Atlantic is the third and final chapter in the Jehammed’s Trilogy. This chapter is set in the heavily scarred region around what was once the English Channel (now called Northern Franka).Due to the events of the apocalypse the sea has retreated from between Great Britain and Europe leaving them connected via a vast crater known as the Janus Crater.  The Anabaptists, 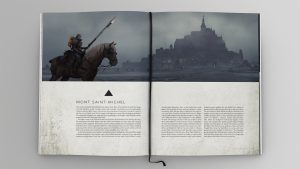 Each book in the trilogy starts with an in-depth examination of the region and its history. While much of this is great set dressing for the adventure, there are lots of entries that leave the seeds for further adventures. You could explore the ruins of London, walk the streets of Mont Saint-Michel (now an Anabaptist fortress), or forget the wear of the world in the harborside taverns of L’Arc.There are tables for rumors, summaries of each cult’s presence in the area, and a timeline of events for easy reference. The region map inside the cover is very useful for placing these areas and is perfectly themed to accompany content.

After the “world book” section titled STARFIRE, there is BURNT IDOLS, a chapter of notable NPC personalities with a detailed write-up, fantastic artwork, and their game statistics.

The third chapter, BLACK ATLANTIC is the meat of the adventure module. There are several introductory pages to help game masters prepare and set the stage. The module itself is divided into three acts with scenes and sub-scenes that read almost like a novel rather than a typical RPG module. The scenes have a sidebar with possible outcomes and reactions as well as any other game mechanics you may need. This adventure is 100+ pages long! There is a lot of content here and though it is the third part of the larger trilogy, you could play this as a campaign by itself. 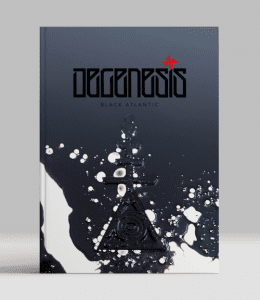 At this point a warning is necessary. As with other DeGenesis products some of the material is mature in nature. While nudity and gore are par for the course with this setting, it was still surprising to see full color illustrations accompanying an explicit sexual encounter. Additionally, there are scenes and illustrations involving the woman from the encounter being stripped and forcefully handled by a group of men as well as a nightmarish vision encounter of the same woman being raped and eaten by a monstrous ram-headed beast. Make absolutely sure that your group is comfortable with these topics before playing through those sections.

The final chapter, THROWN TO THE GODS, depicts the epic finale to the Jehammed’s Trilogy. Without giving away any spoilers, there is a final epilogue that details the changes to the world after this. There are definite consequences and power shifts in the fallout of the scenario. This storyline is rumored to be continued in DeGenesis: Justitian due out later this year.

DeGenesis: Rebirth and Black Atlantic are solid RPG material. The artwork and world detail are impressive. The rules are easy to follow and allow for the story to flow with minimal hold-up. The quality of the physical books are well worth the price but even the digital copies would serve you well with its detailed illustrations, rich worldbuilding, and lengthy module. While the game itself will not suit everyone’s tastes, for those that are looking for a serious post-apocalyptic RPG few others will compete with the quality found here. That being said, before diving into Black Atlantic, you will benefit from at least reading through the first two parts of the trilogy though playing through them will be even better.

All DeGenesis products can be found and purchased at the SIXMOREVODKA website: https://shop.sixmorevodka.com/en/