I have long been a fan of Carcassonne. In fact, I think that it is one of the Top 6 Eurogames and one of the best board games ever made. Long before I began writing for Meeple Mountain, I was churning out reviews for Boardgamegeek using the handle Carcassonnefreak. I just like the game that much. Part of the appeal of the game is its elegant, relatively easy to grasp rules system. The other part is how easily expandable it is. With just the addition of a few tiles and some new mechanics, the game changes completely.

These two aspects work together marvelously to produce a game that is approachable, adjustable, and always growing and evolving. Plus, it’s fun! And that is why when Asmodee approached Meeple Mountain about trying out and reviewing their new Carcassonne app for the Android OS, I leaped at the chance to do so.

Does the app hold a candle to the physical game? Read on to find out.

How Carcassonne is Played

If you’ve never played Carcassonne before, here’s a brief rundown of the gameplay. The game is played by drawing tiles and placing them into the playing area and then assigning workers to the tiles. Each tile has one or more features on them – road segments, fields, cloisters, and city segments. When placing a tile, roads must connect to roads, city segments must connect to other city segments, etc. If this extends a feature that someone else has already placed a worker on, then you may not place a worker on that feature, but you can place a worker on some other feature on the tile. If placing the tile causes the feature to become completed (i.e. – the road has two endpoints) then the feature scores for the player whose worker is on that feature and the worker is returned to its owner. The game ends when the final tile has been placed and whoever has the highest score wins.

When you first open the app, after a brief loading sequence, you are welcomed by the following screen:

Here you have the options to play a game locally against another person or against AI opponents, to play online against other people, or to resume a game that might already be in progress. Along the right-hand side of the screen, you can check your player profile which provides you with at-a-glance information about the matches you’ve played.

Beneath this is where you would go to adjust the game settings, access the online chat functionality, purchase expansions, as well as shop for other Asmodee products. The game settings menu allows you to adjust the volume settings, select your preferred language, adjust the overall graphics quality, as well as a couple of other things. Of particular mention is the “Meeple Finder” setting. When this is turned on and you’re playing your games, the meeples that have been placed into the playing area will occasionally jump up into the air to make it easier to see where everything is. Once the screen starts getting filled up with tiles, it’s easy to lose track of where everything is among all of the artwork. This setting alleviates that. I really like this feature quite a bit and I always have it turned on.

Another feature of the app that I really enjoy is the Achievements aspect of the game. When it comes to video gaming, my wife and I are trophy hunters. There’s really no reason to obsess over grinding out achievement after achievement other than the satisfaction of having done so. For us, it’s a fun way to extend the life of a game long after most people would have put it away. When you’re on a shoestring budget, anything you can do to make a game last is worth it. Achievement hunting isn’t for everyone, but it’s definitely present in this app.

The Carcassonne app makes setting up a game quick and easy and also very customizable. Depending on whether you’re playing online or playing locally, your options will differ. Playing locally is as easy as adding a player. If you’re adding an AI player, you’ve got three difficulties to choose from.

This is where one of my first complaints about the app comes from. Even though there are three difficulties, the names imply that each AI opponent has a particular play style that it tries to pursue. However, nowhere in the tutorial or the in-app rules are these AI or their motivations ever mentioned. I’ve searched the internet high and low and still have no idea what the difference between these opponents is. When I play against them, they all seem to be about the same to me. It might be because I’m a pretty skilled player so don’t feel particularly challenged by them, or it might be that there really isn’t much of a difference. I can’t say for certain, but it would be nice to have some documentation about what makes them different from one another.

If you prefer to play online, creating the game is slightly different. You will have the ability to set different gameplay options such as the length of time each player will have to play overall (each turn that player takes deducts from their overall time), required skill level, etc. There are also a few other options that can have an effect on the game but don’t require anything of anyone else. These settings are more quality-of-life settings. The “Play With Fields” setting will provide you with a button that, when clicked in-game, will show you who controls which fields. The “Dead Tiles” setting will let you know when a particular spot becomes impossible to fill in due to all of the tiles that could legally fit there having been placed elsewhere. “Remaining Tiles List” will let the players “peek” to see which tiles still have yet to enter the game.

If you’d rather play online, the first screen you will encounter is a list of games that are available to be joined. Some of the games will require you to meet certain standards in order to join them such as having a certain karma or skill level or having purchased certain expansions. Next to the game name is a white arrow that, when clicked, will expand the entry to show you what the game in question requires.

Once you enter a game, either by hosting or joining one, you will have the ability to switch back and forth between a 3D view and a 2D view. There’s really no difference between the two. It essentially comes down to a matter of personal preference. I’m 2D all the way. 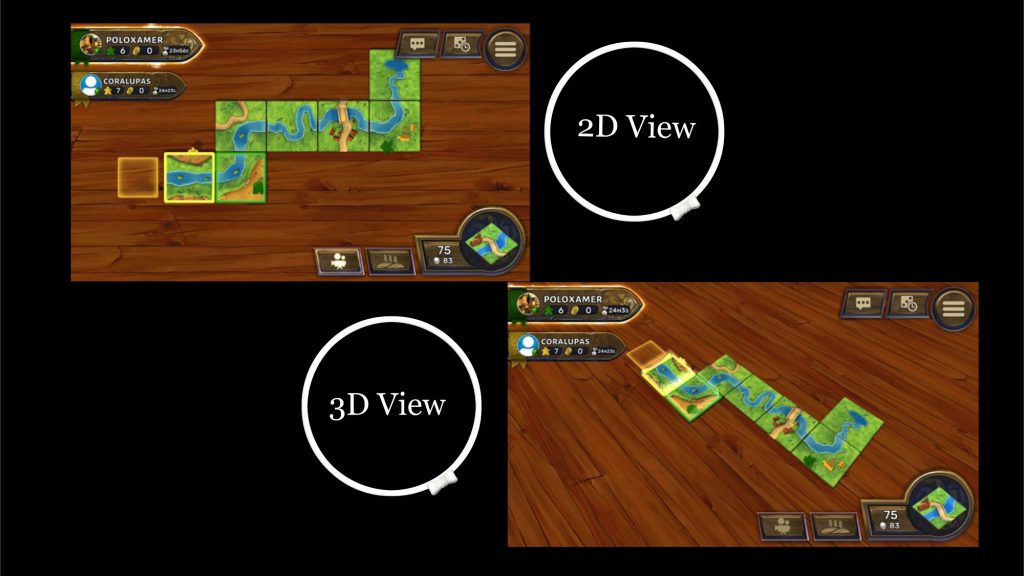 Years ago, a company called Exozet released a Carcassonne app for both the Android and iOS platforms. I owned this app for the longest time but discovered recently after having to replace my phone, to my chagrin, that it is no longer available for download. I only mention this because, for me, it is impossible to play this new version and not compare it to the previous one. In fact, behind the app version of Ascension, it was the second most frequently used application on my device. I played the heck out of it and had even purchased all of the expansions which were available. The Exozet app had become an old friend. In all honesty, I didn’t think that I could ever like Asmodee’s version any better than I liked Exozet’s. Having gotten used to the old way of doing things, I didn’t like the idea of change.

This new version of Carcassonne has quickly grown on me. While the two versions are nearly identical, I do feel that this new version of the app excels in many ways. The meeple finder setting, as I mentioned earlier, is a huge boon. The game hosting settings are versatile and provide a much more tailored game experience than the app that I was using before. Overall, it’s just a well-designed and well-implemented app. I love Carcassonne, and Asmodee’s app has only served to keep that love momentum going.

Not everything about the app is perfect, though; there’s definitely some room for improvement. Here are a few things that I have noticed during my testing. While none of them make the game unplayable, I definitely hope they’re addressed in future updates. For starters, there’s no way to change game speed once the game has begun. While it’s interesting to see the animations of the scoring and the tile placement the first few times, it would be nice to have the ability to turn them off mid-game so that you can get through the play session with some brevity. Secondly, while the built-in tutorial does an excellent job of teaching the basics of the game, the concept of placing farmers into fields is never even mentioned. This is arguably the most crucial aspect of the game for players to understand.

In conjunction with my earlier complaint about the AI, I also noticed that the AI in this app seems to be more concerned with making a lot of inefficient moves in order to block me as opposed to making moves that would actually result in the scoring of points. Another thing that I noticed is that the button to confirm tile placement is immediately replaced with the button to confirm meeple placement and there is no “are you sure?” feature built in so it is very common that you miss opportunities to place workers due to overly sensitive controls. This isn’t so frustrating when you’re just playing a local game against AI opponents, but it can be downright infuriating when you’re playing online where this kind of issue can have a deleterious effect on your ranking.

The only other negative that I have about Asmodee’s app is that, currently, there are only two expansions available for the game: The River and The Abbot. I wasted no time in purchasing both. However, with literally close to a hundred expansions and mini-expansions available for the physical game, I find myself thirsting for more content. That was one of the things that the Exozet app really had going for it – content. Hopefully, Asmodee will continue supporting this app for years to come and hopefully that support will mean adding expansions. Hopefully. Right now I’m enjoying what I’ve got and it’s done so well that it only makes me want even more.

If you’re a Carcassonne fan or thinking about becoming one, go ahead and take the plunge. Asmodee’s Carcassonne app for Android is well worth the monetary and time investment.

board game app   Diversity in gaming   Women in board games