Drafting, a simple game mechanic of choosing a card from your hand and playing it, has been introduced into a few different hobby games. In some it’s the main mechanic, where in others it’s a variation on game play. In Bunny Kingdom, drafting is the main mechanic but with a slight addition of territory control. Will you draft cards to increase your control of the board or to push ahead at the end of the game? So many choices, but what will your strategy be? 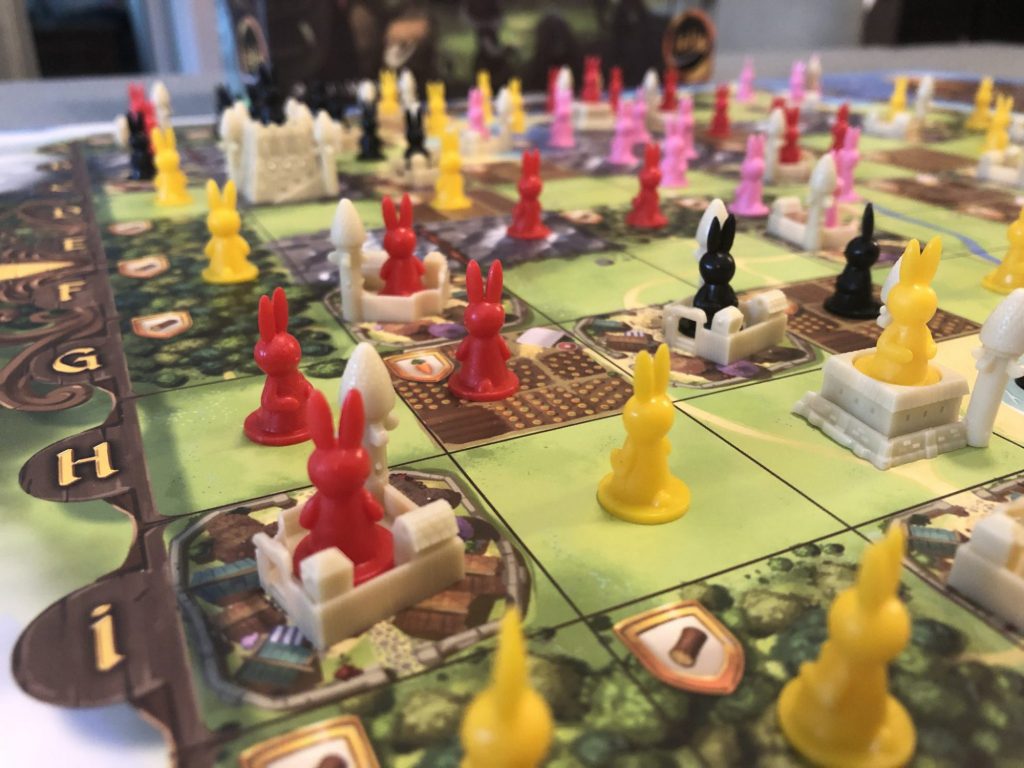 In Bunny Kingdom you are trying to get the most points by having fiefs that produce different resources and have lots of towers. A fief is any number of orthogonally connected territories and the points for fiefs are calculated with the following formula:

Points = # of towers * # of unique resources 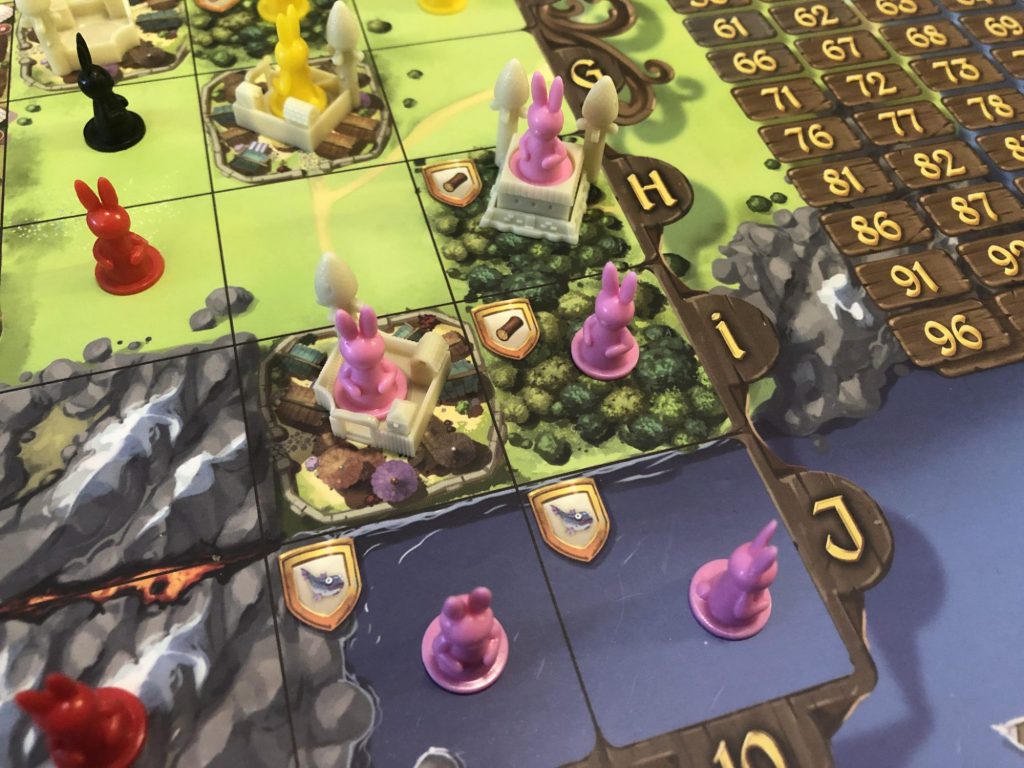 In this example, the pink player has a fief producing wood and fish (2 different resources) and has 3 towers, so they would get 6 points (2 * 3 = 6)

This is also considered the drafting phase where all players simultaneously choose and place two cards face down in front of them, and then pass the rest to the next player on their right or left (depending on which way the cards are being passed). Those who have played Sushi Go! or 7 Wonders will be familiar with this mechanic. Once everyone has chosen, all players reveal their face down cards at the same time.

There are four main types of cards in the game: 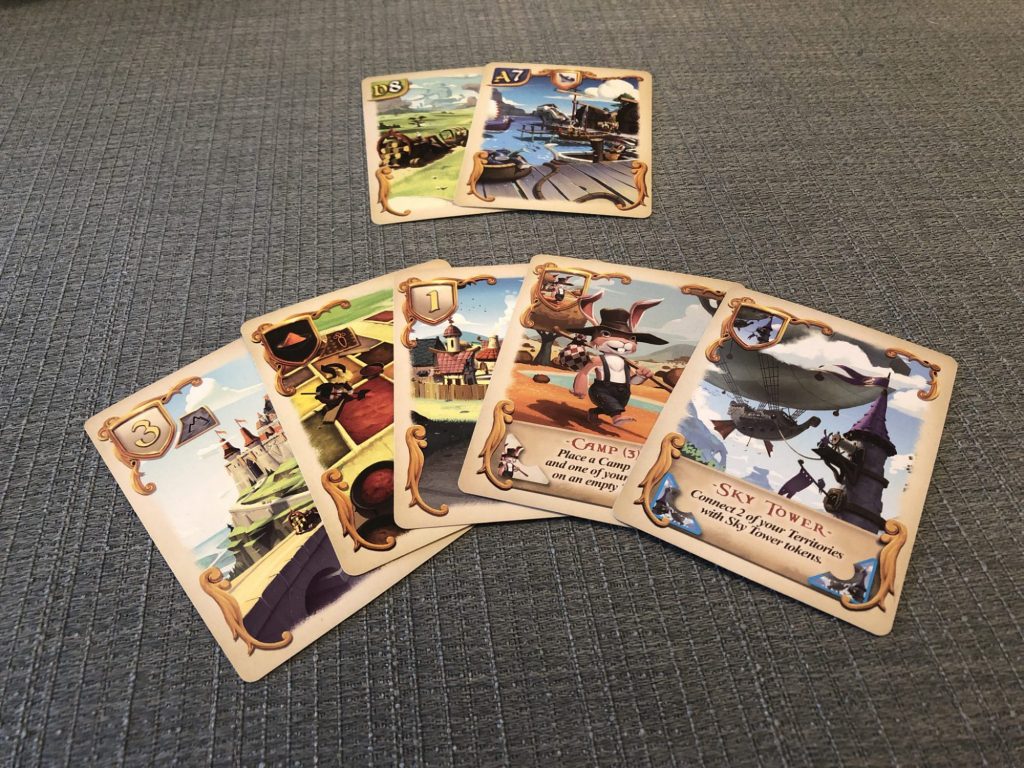 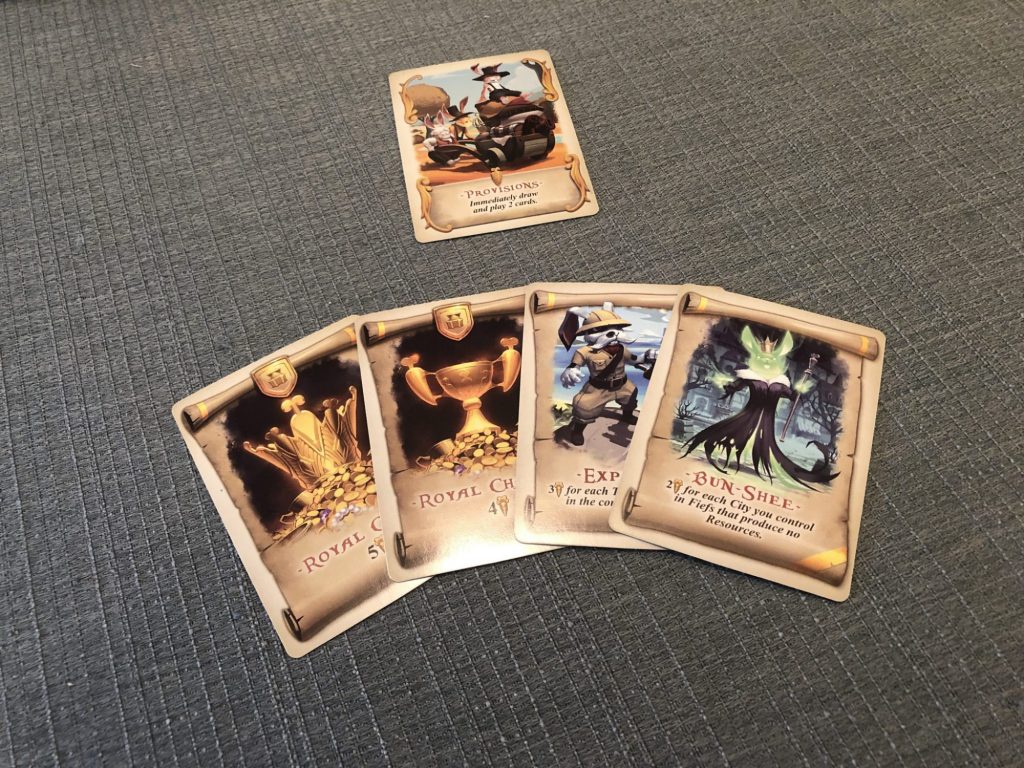 Once all players have drafted and played their last 2 cards (out of 10 or 12 depending on player count), the Construction Phase begins.

Players do not have to place their tokens or city pieces during this time if they do not wish to, but any token or city piece not placed by the 4th round cannot be used. Once everyone is finished the Harvest Phase begins. 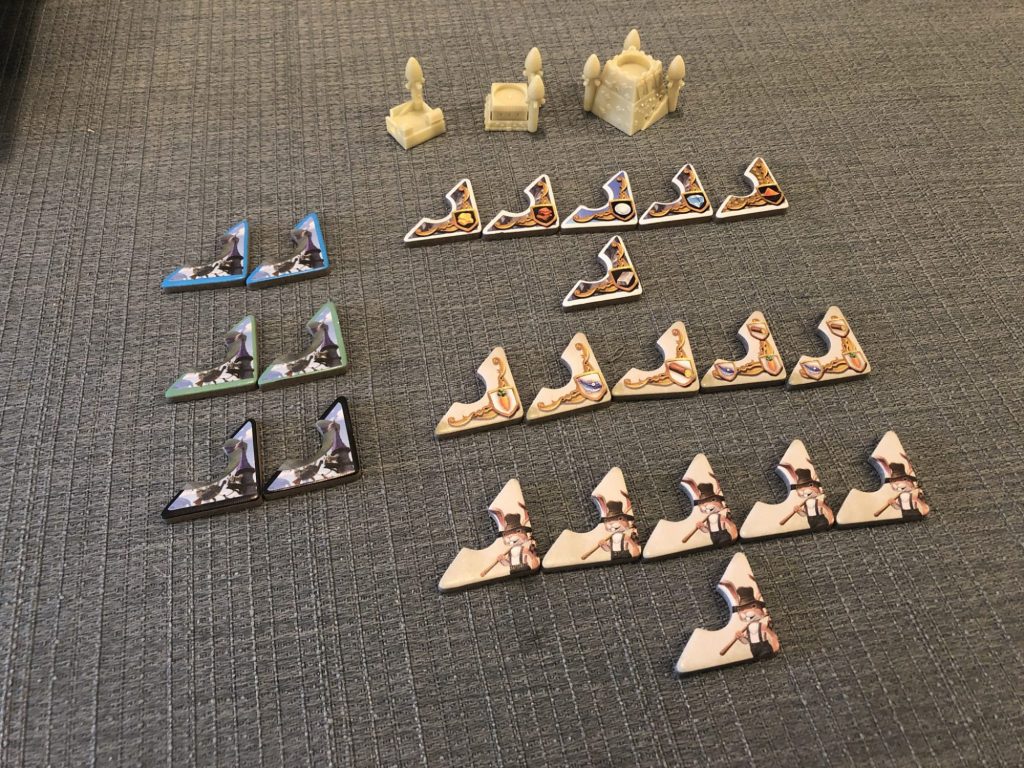 Different tokens and city pieces used in the game

Everyone looks at their fiefs and scores them accordingly. If a fief does not have any resources or towers then that fief does not produce any points.

This continues for 4 rounds and after the last Harvest Phase the Final Scoring Phase begins.

During this phase players reveal their Parchment cards and collect points. Some Parchment Cards just give a certain amount of points where others will give points based on certain criteria (having the most cities or the most carrot production, etc). Once all points have been tallied the player with the most points is crowned the victor and given the honorific title of “Big Ears”! 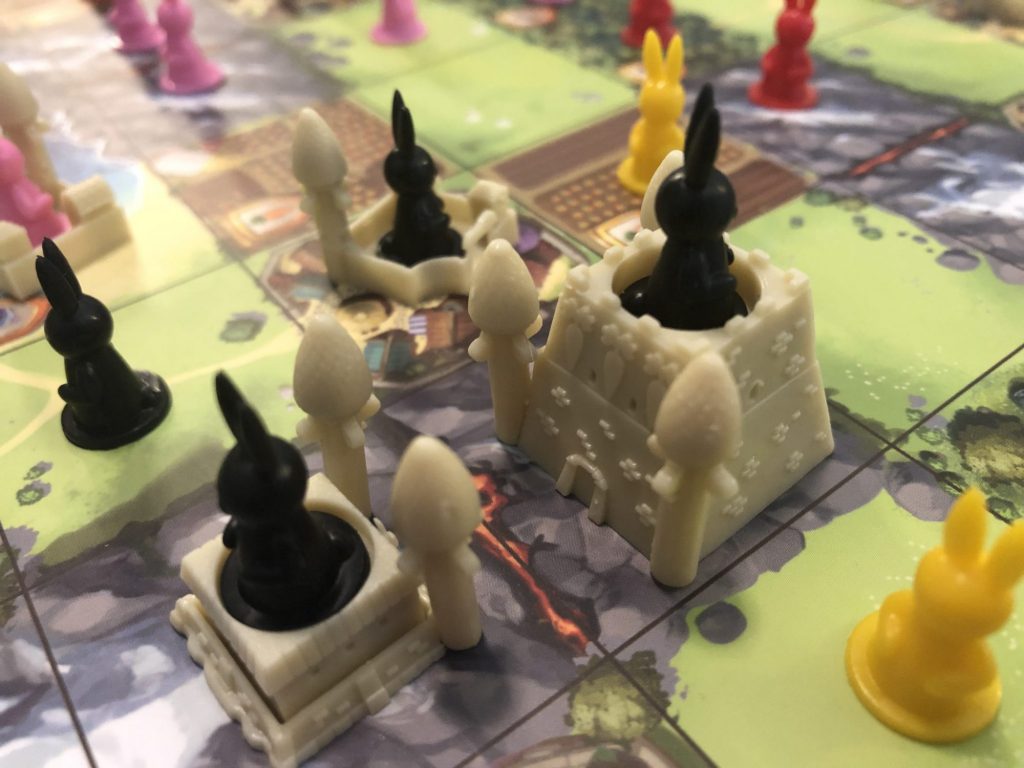 Drafting games come in a wide variety from simple like Sushi Go! to much more complex like Blood Rage. Bunny Kingdom fits nicely right in the middle. It isn’t too difficult but it gives you much more to think about. The cards are easy to understand and there isn’t a ton of iconography to remember.

I thoroughly enjoy Bunny Kingdom! There isn’t a lot of setup and it’s easy to teach. We introduced it to some friends and they caught on quickly. The gameplay is fun too. I enjoy looking through the cards and figuring out which cards will help my strategy but will also hinder the other players. It can be a really hard decision and I love that!

The artwork is also a huge plus. Normally we think of bunnies as cute, but in this game there are bunny warriors and explorers and it is just adorable! And then you even have bunny meeples! Iello could have easily just made regular meeples but they didn’t. Those little guys make for a great table presence!

As with most drafting games, the thing I love most is the lack of down time. Since every player is simultaneously choosing cards, everyone is engaged through the entire game. Yes, you may have some game plays where a few players take a little longer to choose cards (probably will feel that with newer players), but once someone has played the game even just one time they’ll understand the cards and how it works so there will be very little down time. 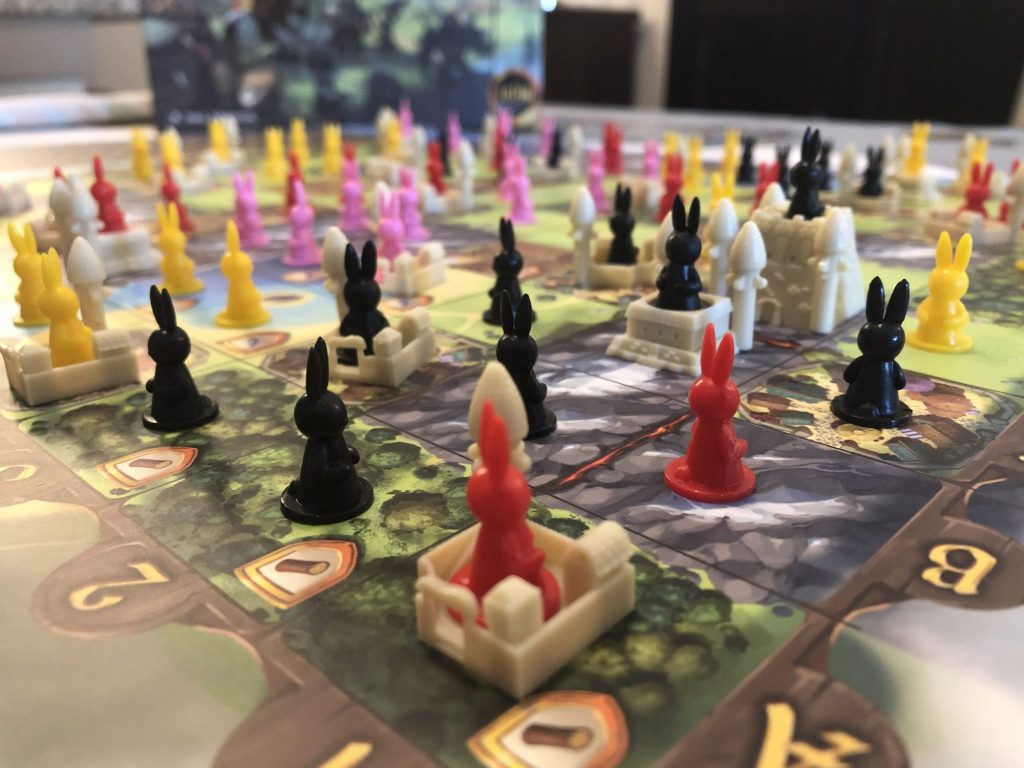 As much as I do like this game, it isn’t perfect. There can be “take that drafting” where you play a card simply to take it from another player that would need it. Even though it doesn’t really bother me (I even tend to do it), it is something to keep in mind if it is not your preferred style of play.

Also, my husband and I played this at first with just two players and the rules are slightly different. Instead of choosing two cards during the Exploration Phase, each player has a deck of 10 cards in front of them along with their hand of 10 cards. At the start of drafting each player takes the top card from their deck. Then, from their hand, they choose 1 card to play and 1 card to discard. Now that we have played with more players, we are both in agreement that more players is the way to go. With more players you play 2 cards instead of just 1. I found that when it was just the 2 of us I would want to play 2 of the cards but would end up discarding one of them because I didn’t want him to have it. Sometimes that can make you feel that you are hurting yourself more than your opponent.

Also, with more players there is much more tension. With two, each person can just focus on either side of the board and not affect or encroach upon the other player. Yes, this is a drafting game but it is also territory control so having the tension of where other people are making their fiefs and how you can block them makes for a much better game!

Overall, Bunny Kingdom is a simple drafting game, but it adds just a little bit more to make it feel strategic and rewarding. If you haven’t checked it out yet, I highly recommend it! Love those bunny meeples!