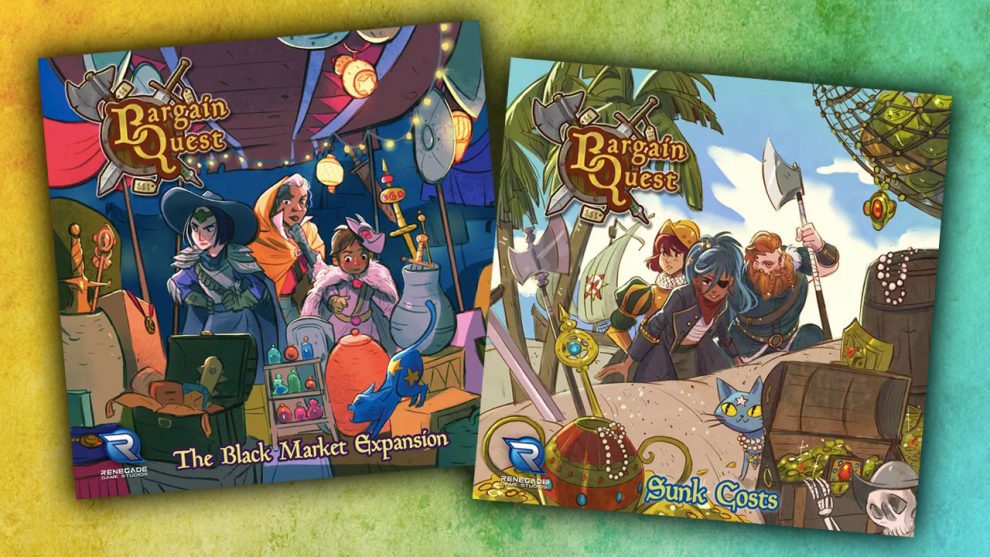 Tom Franklin @fivecatslairdfivecats
Add Comment
Bargain Quest has two major expansions. Are they hits or misses? Read our review to find out.

Recently, I reviewed Bargain Quest by Renegade Games Studio. In Bargain Quest, you and your opponents are shopkeepers looking to sell equipment to eager Adventurers who are heading off to fight Monsters. The items you sell may help the Adventurers or they may do nothing, but that’s not your concern. All you care about is getting as much money from them as you can because you stand to score more points from their money than if they defeat the Monsters.

If you’re just interested in my thoughts about the two expansions, feel free to skip down to the Thoughts section. Otherwise, keep reading to see what’s included in each expansion.

Each expansion comes with at least one additional Display area, allowing for an additional player to join the game. Each also comes with new Monsters.

The new Assistants are all on the shady side. Some, like the Illicit Contact, require you to spend a Star (a point from wounding a Monster) to claim.

In order to access the Black Market items deck, you’ll also need to spend a Star. This becomes a standard upgrade option after battling a Monster.

Once you’ve bought into the Black Market, you’ll take a Black Market items card into your hand at the start of each Drafting phase. After examining your five cards, you’ll discard any one card to go back to the standard four cards and begin the Drafting phase as usual.

Black Market items are a mix of good and bad cards. Either way, most will earn you money.

The new Adventurers included in the Black Market Expansion are a mix of multi-class and single class characters. More on this in a bit.

The Sunk Costs Expansion has a nautical theme running throughout the cards. The new Monsters, for instance, are all related to the ocean underworld in some way.

The new Adventurers are nautical in nature. (Even the Vikings traveled by boat, remember!)

The biggest change the Sunk Costs expansion brings has to do with the Drafting phase. In the standard game, each player is dealt four cards. They choose one to keep, then pass the other three to their left. This repeats four times, until each player has four cards again.

The Sunk Costs replaces the Drafting phase with a loading of items (cards) onto cargo ships. Instead of four cards, each player is dealt two cards. On a turn, you’ll place your two cards, face up, onto the cargo ships available, either both on a single ship or one card each on two ships. The next player places their two cards in the same way, and so on.

Each cargo ship can only hold a maximum of four cards (unless otherwise stated). However, at any point, a player may choose to discard their two cards and claim a cargo ship. Once claimed,the cards held by the ship go into the player’s hand and any special power a ship grants remains with the player until the end of the round.

At the end of the round, the cargo ships are returned to the box and new ships are laid out for the next round.

In my review of Bargain Quest I criticized what I felt was a major problem with the game. Between the Drafting phase, the Display phase (where players bid on Adventurers), and the Shopping phase, there are too many chances that at least one player will not be able to sell anything to their Adventurer. (It happened in my group each time we played and was decidedly not fun.)

To make this easier, each expansion comes with several multi-class Adventurers, which is helpful.

In that same review I also said, “Bargain Quest is a game I really want to like. Instead, after each game I’ve felt like I wanted there to be something more to the game than what’s there.” So, did either of these expansions give me that something more that I was looking for?

In short, no. And each one for different reasons.

The Black Market Expansion had some interesting (and amusing) items, but the cost of a Star (one point, or ten coins, the same cost as the standard upgrades) to access them seemed expensive to my group. This becomes a simple matter of economics—do I think I’m going to be able to make more than ten coins from the Black Market cards that I couldn’t make from the standard Item deck. Having played with them, I’m not convinced I can.

The cargo ship mechanic replacing the Drafting phase in Sunk Costs felt unnecessary. I think it’s meant to allow players to see what cards are on offer and decide on which to choose based on the Adventurers available that round. We all agreed that we weren’t benefitting from the cargo ships, nor did we prefer them over the standard Drafting phase. Other than granting a special, asymmetric power to each player for a turn, the cargo ships felt like they distracted from the game more than they helped it.

There were specific instructions for combining the two expansions, but they felt far from complete. We were left with more questions than were answered.

The one thing the expansions do that is good is that they add more cards of all types. The addition of new multi-class Adventurers and unique items helped Bargain Quest stay fresh.

However, is that worth the price of either expansion? Personally, if you’re interested in adding cards to your copy of Bargain Quest, I’d recommend first looking at one of the four Bonus Packs for the game. Each comes with a different mix of cards, especially Adventurers. I’ve bought three of these and they’re a standard part of my base game now.

My group and I enjoyed revisiting Bargain Quest, but all agreed that the unique items for each expansion were both misses. I’ll keep all the new Adventurers, Items, and Assistants cards with the base game. I may even try to shuffle the Black Market cards into the standard Item deck, despite the backing colors being different. The Sunk Costs cargo ships, however, will stay in their box.

Bargain Quest remains a game I’ll play if asked. I’d still be likely to recommend several other games in its place, and I’d certainly look to buy a different game rather than either of these two expansions. 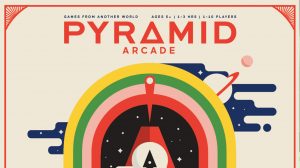 A box with everything you need to play at least 22 games for between 1-10 players sounds too good to be true. Is it? Read our review of Looney Lab’s Pyramid... 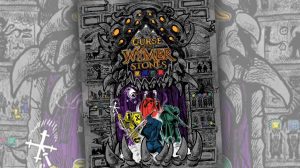 While the Adventurers struggle to find the Wymer Stones of power, the Cursed Dwarves await their time to enter the dungeon and do battle. Join Tom as he dives into the fantasy abstract game Tak, from the mind of Patrick Rothfuss. 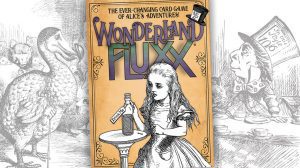