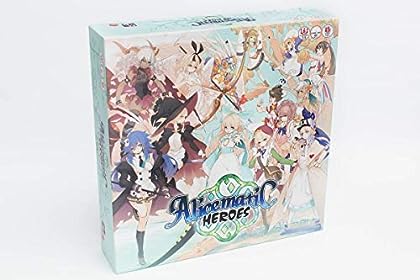 The Queen of Hearts has summoned Alice to rebuild Wonderland, which has been devastated by an invasion of Nothing, which is devouring the dreams of all in the land — but the Queen has mistakenly summoned whole armies of Alices! Dozens of Alices abound, and now they're taking sides and forming teams to see who can put the land back together best.

In Alicematic Heroes, you take charge of one of these teams, and you'll have a handful of Alices to use in your efforts. Alices come in five colors, with each player having a set of player boards in these five colors. On a turn, you first summon an Alice to your kingdom, playing that card from your hand onto the player board of the same color, but only if you can pay the cost in dream power; each Alice has a cost, and you must have at least this many dream cards (yellow) or be able to make up the difference by paying dream tokens. If you can, you immediately use the power — or Megalomania — of that Alice; if you can't, choose another card or lay an Alice face down as a commoner. Playing a commoner doesn't cost anything, lets you draw another card, and builds up the power of one of your five colors, but you don't get a Megalomania bonus and your turn ends immediately.

If you played an Alice, you can then invade a territory in the playing area, which is composed of modular hex tiles. To conquer the territory, you need enough military power (red cards) or supplemental military (red) tokens, and if the territory is not on a hex where you occupy a city, you must have enough food (green cards) or food tokens to reach that space. If you conquer it, you receive a bonus based on the territory's color: military, food or dream tokens; Alice cards; or points. If you conquer a city, you score points and now have a foothold on that hex.

If you lack enough military and food, you can still place the territory under attack and finish it off on a later turn, but another player can potentially conquer it in the meantime.