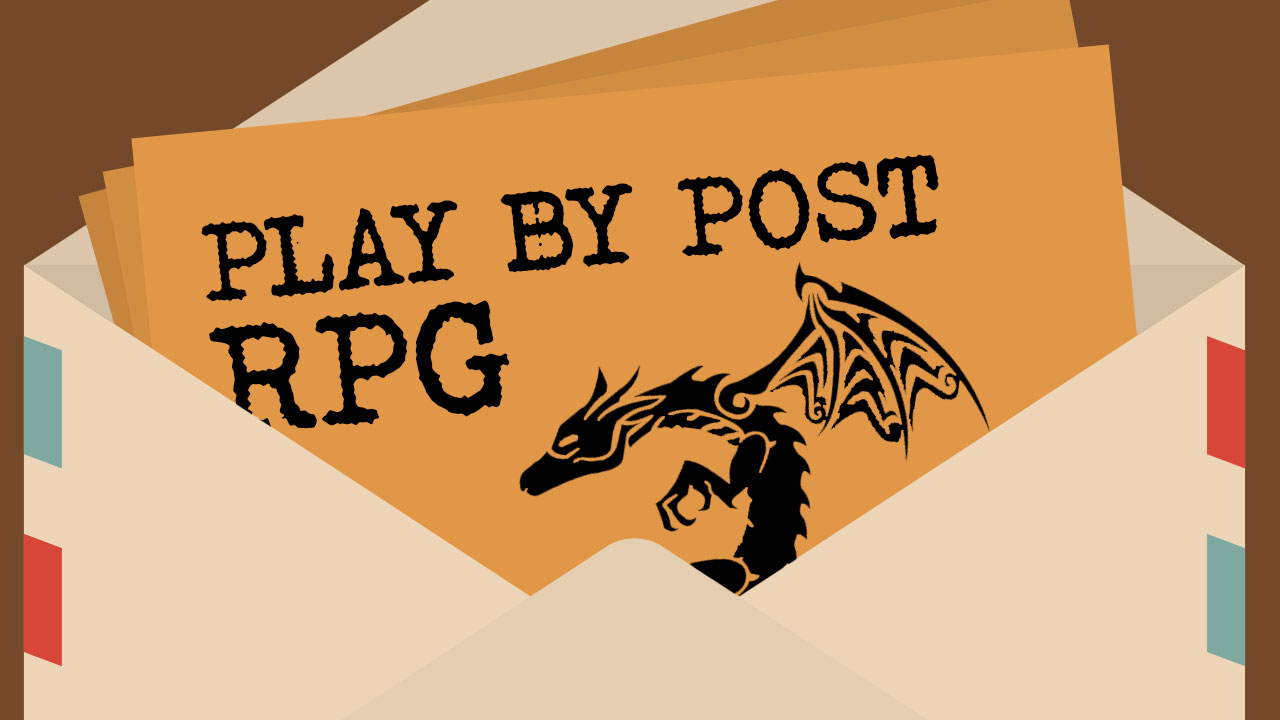 Play-by-post role-playing can seem daunting, yet offers rich rewards. If you’ve been considering PbP, this article will help you find the treasure stuck in the Web.

As someone who’s moved across the country twice in the last five years in addition to becoming a stay-at-home dad, I find myself increasingly turning to online games. Having the option to play on my own schedule and from any location is a huge advantage. Though most of that gaming takes the form of mobile board game apps, lately another form of online play has captured my interest: play-by-post role-playing games (PbP RPGs).

Broadly speaking, play-by-post is any method of playing games in which each player submits their actions remotely. It originated before the advent of the Internet as a way to play turn-based board games by mail, when players would mail a letter containing their orders for each turn to a central organizer who would combine those submissions and provide a final tally of the turn’s events. In many cases, the results would be printed in a single place, such as a magazine, which the players would have to obtain in order to see what happened.

As the digital world has evolved, the old method of playing by mail shifted to online forums, allowing for a somewhat quicker pace and making it easier to run more complicated games. Accordingly, role-playing games started to gain prominence, as players could interact with each other much more quickly; games are limited only by how frequently the players can respond to the previous post. In RPGs, the play-by-post format really hit its stride. Character-focused games benefit from the somewhat slower, often introspective feel of online play, as well as the ability to easily reference story information from previous posts.

This is not to say that PbP games are identical to tabletop play: quite the opposite! Play-by-post can be equally rewarding, but it’s worth knowing what you’re getting into before you start. This article will hopefully help you navigate your first few steps into this unique niche.

Let’s be honest right at the outset: play-by-post isn’t for everybody. Even veteran RPG players may struggle to adapt to the vastly different style. However, there are a few traits that can help you find success with play-by-post.

First, and most importantly, you must be tenacious. PbP games can be painfully slow and erratic. Often players post quite frequently at the beginning, which may make it seem as though the game will move quickly. Over time, however, most games slow down dramatically due to a variety of factors such as real life commitments, a drop in enthusiasm, or waiting for a specific player to post. If you’re going to get the most out of playing by post, you should commit to checking in on the game at least once a day and posting as quickly as possible once it’s your turn or during open role-playing periods. Even if the game lapses for several days or weeks, keep checking in because you never know when somebody will post and rekindle interest. If you’re going to be running a game, you have to be able to stay on top of your players and make sure things keep moving when they start to stall out.

Secondly, you must be a competent writer. You don’t have to be a novelist, but since all of your content will be written, it’s important that you are able to communicate your thoughts effectively to total strangers. This means using proper grammar and punctuation as well as making sure that your word choice is varied enough to be interesting yet straightforward enough that a non-native speaker can understand it. One of the great things about playing RPGs online is that you can easily play with people across the world; don’t make it too hard for others to understand what you’re saying.

Now that we’ve established the traits that will be beneficial for PbP, it’s time to talk about how to find or start a game. The truth is that play-by-post is a pretty broad category, and there are several different methods which offer the same style of play. We’ll talk briefly about three of these options: play-by-email, play-by-forum, and play by chat app. For clarity, it’s worth mentioning that these are all fundamentally the same so picking the right one for you is really down to personal preference.

Play-by-email (PbEm) is the most accessible method: almost everyone has an email address and a list of contacts, so it’s very easy to start a g with your RPG-loving friends. Emails which allow threaded or conversation-style responses are going to work best, since you can have one email chain for each scene, as well as a separate chain for rules or out-of-character discussion. The downside of this format is that email isn’t explicitly designed for games: there’s no easy way to find new players and there’s not a ton of support for basic elements like character sheets, dice rolling or maps. As a result, email is well-suited for rules-light, narrative-focused games with friends.

Play-by-forum (PbF) is still a very popular option and with good reason. Forums offer significant benefits over email: the ability to meet new players, a clear way to manage different threads and games, and integrated support for dice rolling and other game tasks are among the perks. There are several different sites for playing RPGs by forum: RolePlay Online, Myth Weavers, and Tavern Keeper offer essentially the same functionality and are all free to register if you want to try them out. RPGGeek, the sister site to BoardGameGeek, also runs regular PbF games, making it easy for tabletop gamers to make the transition to online RPGs.

There are also an increasing number of campaigns being run through various chat apps. Discord and Slack are both excellent options, and many games have dedicated groups on those platforms that can help you find players and get advice. Recently, I’ve come across two different instant-chat apps that are specifically dedicated to role-playing: mRPG and RoleGate. I haven’t had enough experience with either of these to recommend them, but they seem to offer a chance at quicker play, closer to the pace of a live game. In fact, some GMs specifically request that all players be online during set times, just like scheduling a face-to-face game!

A Little Bit of Worldbuilding

Once you’ve picked a platform, joining or starting a campaign is usually fairly straightforward. However, for your first experience, you’ll want to think about what style of game you’d like.

In general, rules-light narrative games like Fiasco, Lasers and Feelings, or even the Powered by the Apocalypse titles are a great choice for play-by-post. Some games, such as Our Time on Earth, are even explicitly designed for text-based play. The easier it is for a player to respond, the more likely they will be to do so. That means games with complicated rules systems, frequent dice rolling, unusual or numerous objects like cards, or lots of GM arbitration will often slow the game down even further and potentially lead to players dropping out entirely.

That doesn’t mean you can’t pick a crunchy, combat-heavy game that takes place across a hundred different maps if that’s what you’re craving. It’s absolutely possible. Just be honest about your expectations: while play-by-post games offer the time to delve deep into worldbuilding, that kind of commitment is hard to sustain. As a player, do your part to read everything the GM posts. Knowing the rules and the world will help you stay involved. As a GM, don’t take your players’ time for granted. Find ways to make it easier on them by uploading short rules summaries, handling some of the more fiddly bits “behind the scenes” so that players don’t have to worry about them, allowing minor rules errors to go uncorrected, and ensuring that the game doesn’t stop moving because one player isn’t able to respond quickly enough.

Now that you know the basics of play-by-post roleplaying, it’s time to get started. Like any new RPG player, the best way to learn what works for you and what doesn’t is to experiment with different things. Take advantage of the format by playing a character who has more internal conflict than external. Try a game that you wouldn’t normally try if you saw it on the table. You can always drop out of a game if it isn’t fun (though please notify the other players before you do). In the end, play-by-post is another tool to use if you ever find yourself stuck at home or if you’re just looking for a more flexible way to get that RPG fix.

Curators Review: A Curio for Your Collection

Cities: Skylines Board Game Review: We Built This City