Every so often I like to consider seemingly arbitrary constraints as a challenge to my gaming tastes. I was inspired by one BGG user’s journey to cut his collection from 300 to 18 games , this seemed like an interesting thought experiment. Instead of cutting to 18, I (theoretically) cut my collection of about 180 to 10, with some caveats. Let me know what you think.

Age of Steam is a game all about trains, building tracking, connecting cities, and delivering goods amongst them. The gameplay revolves around an incredibly tight economy where players have to consistently take loans to pay for track and engine upgrades with the hope that their income, established from making deliveries, outpaces their spending. Each round of the game, players are forced to make tough decisions in an auction for special powers which may let them crucially build first, urbanize new cities, or lay additional track.

Age of Steam is the quintessential heavy gamer’s replayable title. There are somewhere north of 150 map expansions for this economic train game where each map dramatically changes the rules of the base system. The maps, combined with the interesting base game, make this a title for the ages and one that I can continue to appreciate after dozens of plays.

The simple gameplay of dividing into teams and the teams relying on their question master to direct them to the secret words made Codenames into an instant classic. I can’t count the times my extended family has broken into guys against girls, kids against adults, or one sub-family against another for this tense word game.

I’m going to cheat with this one, I want the Codenames cards and clues but also the cards from Codenames: Harry Potter. I have found the Harry Potter edition to be the best version so far because my family are all huge fans of that theme, but that version only comes with “Codenames: Duet” style cards (read our review of Codenames: Duet). The word choices become so much more challenging since, often times, the perfect word linking your clues will already be on the board.

Dungeon Petz is a game all about raising petz to bring them to shows or sell them to wealthy investors. The gameplay utilizes a worker placement and bidding mechanism where at the start of each round players have the group their workers and, based on how large the group is, that determines the order you can place them. Workers are used to collect resources to feed your petz, get you new, stronger cages, or bring new petz to your house. Each round, you’re required to fulfill your petz’s needs with food, play time, or the dreaded poop cards. There is seriously so much poop in this game.

I like heavy games, and there is no more perfect heavy intro game than Dungeon Petz. Is it as heavy as some titles on this list? No. Is the teach burdensome? Somewhat. But is it adorable? Yes! The charm and thematic integration of Dungeon Petz makes it approachable to a large population of gamers. Just be aware, you might get too attached to your petz!

What do you get if you cross a word game with a deck builder? Paperback! Paperback follows a fairly standard deck building formula of build an engine with your deck and, when the time is right, convert your engine to score points. The trick of the game is, instead of optimizing actions from your deck, you have to optimize your deck to build words from letters.

Word games are great! Growing up, my family played more Scrabble than anything else and I have fond memories of piecing together words from the tiles on my rack. Paperback brings that joy back into a modern system that I can share with a wide number of gamers. There is something to love in the gameplay if you’re a fan of deckbuilders – trying to get the best actions to pair with your letters, or word games – trying to match up letters to make bigger and better words.

Arguably, the game that popularized the worker placement mechanism, Agricola is a game about just trying to make it through the game. The gameplay forces you to build an engine to produce vegetables and animals, but also turn those vital resources into food for your family instead of end of game victor points. In practice, the worker placement in Agricola has become the standard for “vanilla” worker placement, but the beauty and reason it stands the test of time are the occupation and improvement cards. The base game comes with several sets of cards which get dealt at the beginning of the game. These cards will almost entirely drive your strategy, forcing you to pass up on short term gains for longer term glory.

With all of the decks of cards in Agricola (and more are coming out as recently as 2018) and the Farmers of the Moor expansion, there is a ton to dig in to. Another relatively approachable heavy game, Agricola provides a tense, tight experience that I find incredibly enticing. It serves as a benchmark for me as what a solid, replayable game is and it is a classic for that reason.

Dating all the way back to 1999, Roads & Boats is one of the two original titles (along with Bus) from my favorite designer – Splotter Spellen. The goal of Roads & Boats is simple – produce stock certificates to score points. The challenge? Actually getting any resource where it needs to be and being efficient about it. Conquering Roads & Boats is all about mastering the puzzle of production, see getting a stock certificate requires you to have a piece of paper and two sets of gold coins at your stock exchange. Easy enough, but that means you must already have taken four pieces of gold and two pieces of coal to a mint. Ok, but that means you must have had at least two mines produce all of their gold, which means you already got enough resources to build the mines in some mountains that are hopefully close to the rest of your production. Managing this exploding cascade of production, while remembering that your opponents may come and take any unguarded resources at any time, makes Roads & Boats exceptional.

The most painful logistics puzzle I’ve ever played, this is another title that focuses on replayability and depth. Within the box is a scenario book where players are able to make maps from hex pieces, simulating different types of challenges within the game. With the variable map setup and an incredible breadth and depth of gameplay, I can find an unlimited number of plays from what is arguably Splotter’s heaviest title. Also, as a bonus, the game plays solo so on the off chance no one wants to melt their brain with me playing Roads & Boats, I can still get it to the table.

Winning at Pitchcar is as simple as being the first player to flick their disc around a track. But it never is that simple. Every game, a new track is built simulating some new and unique style of driving. On some courses, there will be large embankments, allowing players to make epic shots across multiple tiles. In others, players will have to deftly navigate tight corners.

Dexterity executed perfectly. Pitchcar is a game that creates more smiles around the table than any other. With the plethora of expansions and the user setup, Pitchcar has the capacity for hours of good times. The fun of the game lasts from setting up the course all the way through the last player crossing the finish line. As a warning, Pitchcar will always collect a crowd around the table.

What is there left to say about Gloomhaven? It is the perfect dungeon crawl, even for those who don’t like dungeon crawls. You play as anti-heroes in a world built around standard high-fantasy tropes but where the game designer took enough care to shirk the normal expectations. Over the course of 50+ missions, your characters will level up, gain new abilities, and eventually retire allowing you to learn the ins and outs of a new character. Read our review of Gloomhaven.

It was difficult to decide on a coop game for this list, with both Gloomhaven and Spirit Island being such stand out titles. I landed on Gloomhaven because I just want to know what is in that box! If I only have a limited number of games in my collection then that will give me plenty of time to explore the expansive world that Isaac Childres has built for us to enjoy.

9. Sidereal Confluence: Trading and Negotiation in the Elysian Quadrant

Asymmetric player powers in a space negotiation game, has to be Cosmic Encounter, right? Wrong, Sidereal Confluence: Trading and Negotiation in the Elysian Quadrant takes those same mechanisms and packages them in a more euro friendly package. Players are friendly space races who have come together to improve all of their societies by sharing goods and new technologies they have developed.

Negotiation is used surprisingly sparingly as a core mechanism in modern board games and even less-so in games that have a decent amount of depth. Sidereal Confluence bucks that in a system built around fluid engine building and pure negotiation. The variety of player powers paired with the inherent differences in experience based on the participants creates an amazing experience that I can’t get enough of. Read our review of Sidereal Confluence.

The Estates, which is a reprint of the 2008 title Neue Heimat, is an auction and city building game with teeth. Players start the game with $12 million to their name, but no way to score points. Players will auction off cubes, representing floors of buildings. The first time any player wins a particular color, they will become the owner of all buildings with that color as the top floor. It is entirely possible that players will not own any colored buildings, thus they will have to change their goal from scoring points to tanking everyone else’s. 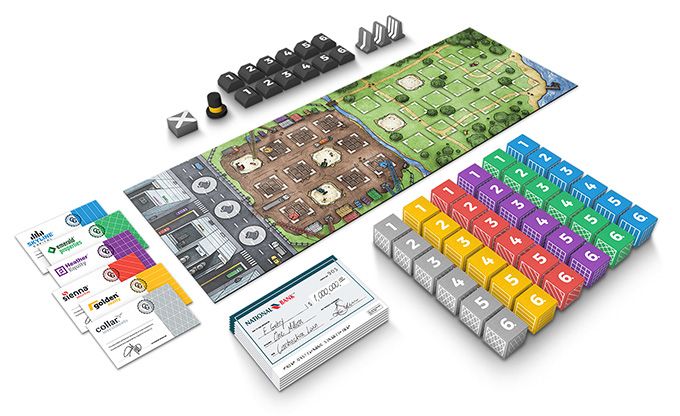 I needed one more relatively short game on the list since most of the titles here are 90+ minutes.  The player-driven market and random setup create an environment where players are forced to weigh their own costs against the benefits to other players with every move. Also, the gameplay is very approachable and is typically done in under 45 minutes so it’s accessible to a larger population of gamers than some of the titles on this list.

What are the 10 games you’d keep if you could only have 10? Did I miss anything important from my collection? What would you have kept?