Alex Colby gaymerinla
4 Comments
Fog of Love is a two player romantic comedy as a board game where you can play as a straight or gay couple. But does having a “Gay Option” match up with the real life gay experience?

June is LGBTQ Pride Month, in honor of the Stonewall Riots of 1969 – a reaction to police raids on the homosexual community in the Greenwich Village neighborhood. In the spirit of Pride, I wanted to discuss my experiences with Fog of Love, a storytelling board game that’s character driven, depicting an often doomed or awkward romance in the style of romcom movies. From the outside, Fog of Love hits all the popular methods for addressing gender and sexuality diversity in board games. Two sided character cards let you choose a male or female silhouette for each player. The manual and scene cards avoid gender specific pronouns. It even affirmatively mentions the ability to play a same-sex couple in the manual, and notes that if there is a scene that uses a specific gender combination different from the couple you’re playing, you can discard it and draw a new one.

This is all a great step forward for commercial board games, especially one that you can get from Wal-Mart. I’ve seen in a few developer interviews that he was clearly interested in addressing people who want to play couples outside of heterosexual norms. This is a bar that a surprisingly large amount of games fail to pass, even when it comes to gender or racial representation. But, when I played it myself, something felt off.

I’m a bisexual male who’s cisgender (I didn’t know this term myself until a few years back, it just means that your gender identity matches the gender that society has assigned to you, basically the opposite of a transgender or nonbinary person.) My current partner of over a year is a pansexual transgender male. We were playing Fog of Love together and chose male silhouettes for our characters.

The game progresses through a series of scenes you select from a hand of cards, and then you and/or your partner makes a hidden decision on what outcome their character would want. The choices are revealed and the results alter the characters’ personal satisfaction levels. 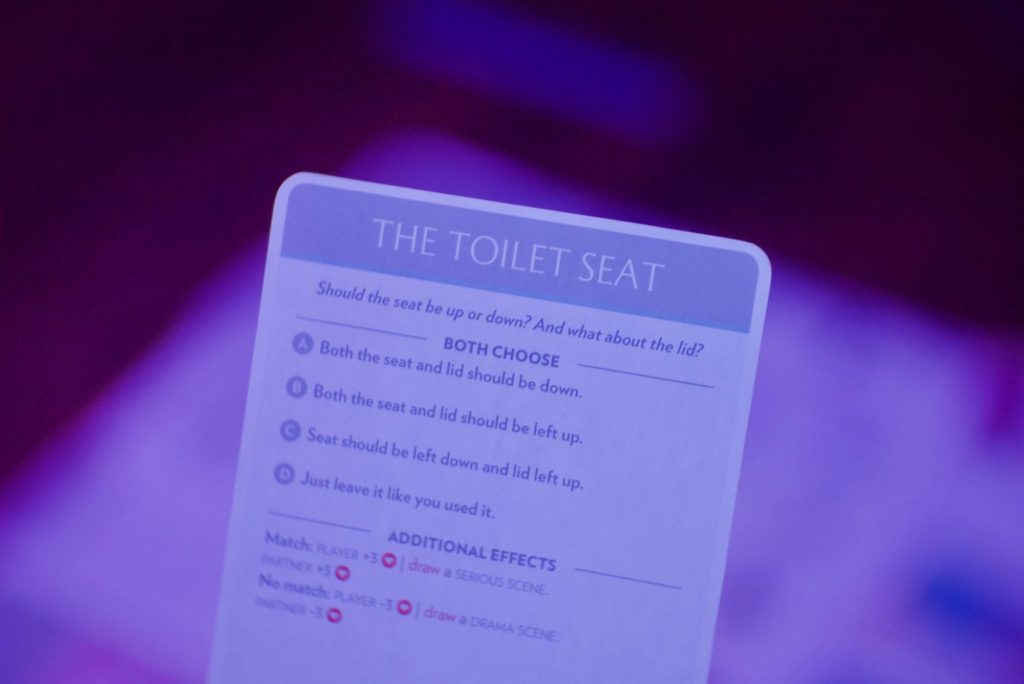 A few rounds into the Fog of Love we encountered the scene card called The Toilet Seat. The scene is simply how do your characters feel the toilet seat should be left after doing your business? Me and my partner traded glances and soon both picked the “leave it like you used it” option, finding it easy for our characters to agree and get the bonus satisfaction points. While The Toilet Seat is a staple of straight stand up comedians and married sitcom couples, it just felt pointless to us and our characters. 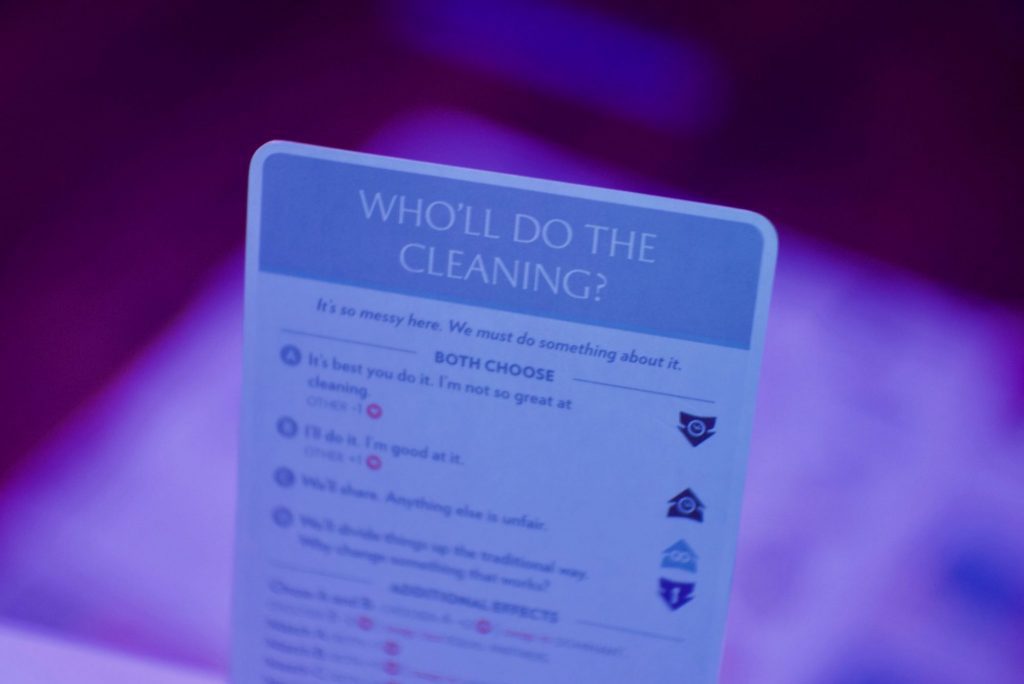 I felt a similar way when we encountered the Who’ll Do the Cleaning scene. Having a very gender-based domestic responsibility split, usually an uneven one at that, is just not as common in same-gender relationships. The first two options were basically either “I’ll do it” or “You should do it,” the third option is what we went with, the “We should share” choice. But then there is also a fourth option where “We’ll divide things up the traditional way. Why change something that works?” Fog of Love does add more close-minded or conventional points to your personality for this option, but its inclusion does remind you that while gay couples are allowed, they aren’t expected.

In America and many other places you are assumed straight and gender-conforming until proven otherwise. But when I introduce myself to strangers, I never lead with my sexuality. In mixed company I will usually never bring up my personal or dating life to avoid being seen as a “troublemaker” or finding out that someone I was getting along with fine is actually a bigot. When starting a new job or joining a new gaming group, there’s no right time to tell everyone your entire history of exploring your sexuality and gender. When it comes up, like someone asking if I have a girlfriend, I usually respond with a “No, I’m gay” and move on.

At least now people know what gay means and won’t ask too many follow up questions. Saying “bisexual” really makes people feel like they can get up in your personal business or expect you to be some sex addict. Heck, I prefer to just identify as “queer” since I came of age in the 2000s when it started to be reclaimed, and I also feel it covers some of my feelings towards gender, and queer feels more visceral and less clinical than the acronym LGBTQ+, but I would not feel cool with some acquaintance I barely knew slinging that term at me… so I just don’t tell people I meet that I identify as queer to avoid having to repeat that entire clarifying train of thought each time. 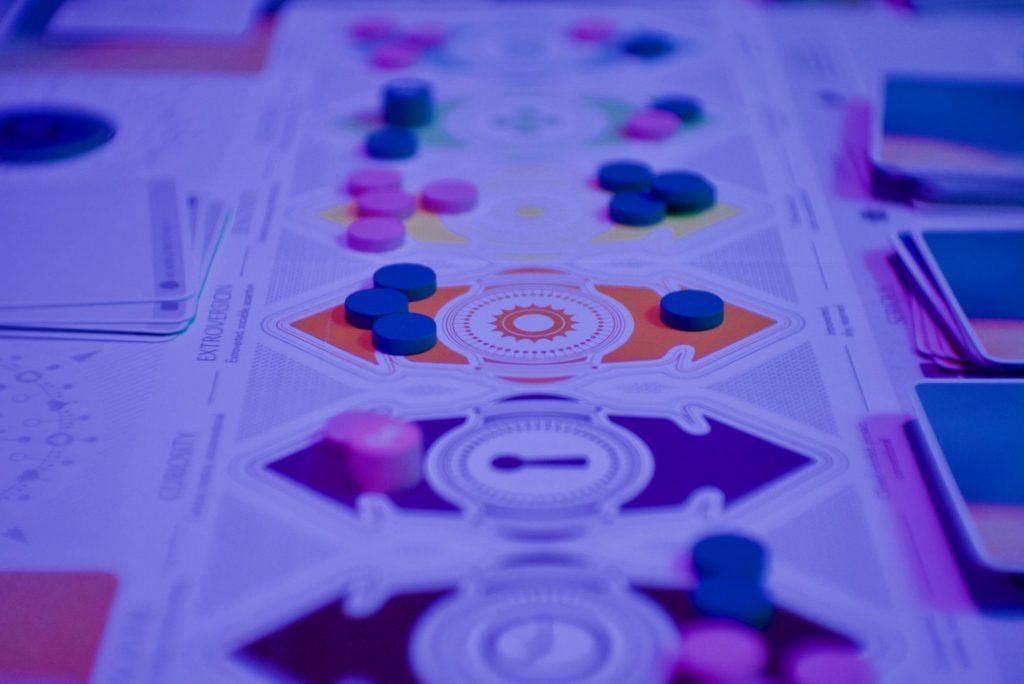 Even among my extended family, I never sat down with everyone one-on-one or gave out a press release announcing my gaydom. At Thanksgiving when my aunt wanted to know how my life in Los Angeles was going at the time, she asked if I was “dating Miley Cyrus yet?” I was in a room with dozens of family members, what was I supposed to do? Come out dramatically as if I’d been hiding something or making a political statement? That side of my family is fairly conservative, and even today just existing as a queer person seems to be an act of political rebellion. So, being polite, I responded with “she’s not my type.”

This is what is meant sometimes by heteronormative culture. Having to remind people you exist is seen as a burden, that we’re a deviant from the norm and any requests for acknowledgement, understanding, and acceptance is “pushy.” This is how I felt when the heteronormative scenes came up in Fog of Love. Like I had to politely remind the game we were playing a queer couple and move on.

For research I started a thread on Board Game Geek’s LGBTQ+ focused subforum, Rainbow BGGers. This was established about a year ago to allow those in the community a place to discuss issues without getting flagged for talking too much about “sexuality.” Previously that could move your thread to RSP, where BGG buries discussions about religion, sex  and politics (which makes some assumptions about whose religion, sex, and politics are considered impolite and vulgar and whose aren’t…). I asked for others’ personal experiences playing this game and many responses were similar to mine– they found they got the most out of Fog of Love when leaning into the gender and relationship stereotypes based on heterosexuality. 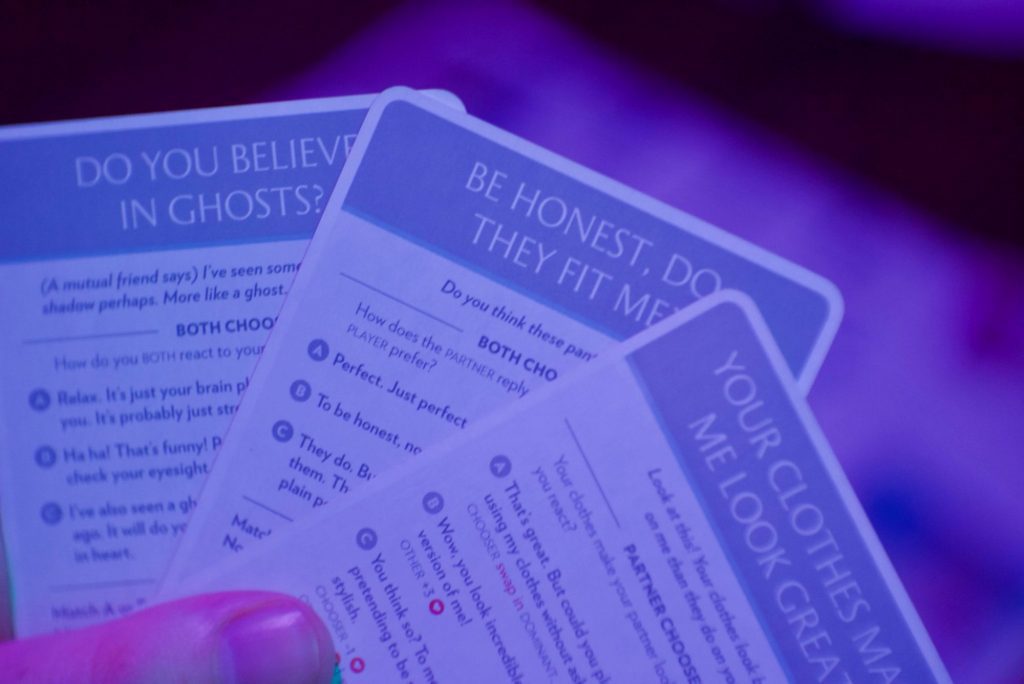 However, there were others who expressed that they are glad the game kept a light tone and didn’t include some scenes about parental rejection, workplace discrimination  or violence inherent in many same sex relationships. It can be nice to live in a parallel world where the realities of sexism, homophobia, transphobia, and all other forms of bigotry aren’t baked into the culture. But when the setting for a game is basically the real present day, it can feel a bit uncanny.The computer game The Sims and board game The Game of Life are other examples of this kind of idealized world. There, race, gender, and sexualities are all just variables in the code, and don’t affect the character’s socioeconomic opportunities in any real way. They let you experience the sadly unlikely fantasy of being an openly queer teacher, politician, or priest. But only in a world where there is no queer culture, no solidarity with your oppressed peers, no Stonewall Riots. But, there are a few great scenes in Fog of Love for homosexual couples: the decision of whether to go to the Pride Parade, the Baffled Stranger who says they didn’t expect people “like you” could be lovers, My Aunt is Coming to Town where you may choose to hide your relationship from a disapproving in-law, and Facebook Drama where your mom’s friend goes off saying you’re possessed by the Devil. And this isn’t simply to say a game’s worth is based on its percentage of queer focused cards.

That BGG thread I posted asking how other queer folk felt playing Fog of Love didn’t go longer than a day before someone tried to derail the conversation. Instead of engaging in our discussion of our personal experiences, they said that we shouldn’t be surprised and that being straight is the norm. As I stated in that thread, I’m not here to express shock or outrage at this game’s writing or its designer. Me and my partner have enjoyed playing Fog of Love and the stories it lets us tell. But if designers, especially straight designers, intend to include real world settings with authentic queer characters, those real life biases need to be a part of that story. Simply giving players a “Gay Option” may not be enough. 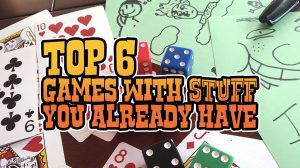 Top 6 Games With Stuff You Already Have

Looking for something new but your Kickstarter budget is drained and your game closet’s already creaking? Check out our Top 6 recommendations for traditional...

Alex Colby is a board game designer, video game developer, game show producer, writer, video maker, retired DDR maniac, and occasionally plays the accordion very poorly. More often than not however he just lays in bed scrolling through online feeds and getting angry. He loves board games, especially as a way to avoid having to talk at social gatherings.