Note: Meeple Mountain received a PDF copy of the contents of this box for review purposes, but the opinions herein are our own.
If you’ve never heard of Shadowrun before, you’re missing out on one of the most iconic roleplaying games of all time. Set in a near-future “cyberpunk” version of our world, Shadowrun puts its players in the shoes of shadowy criminals squaring off against seemingly omnipotent corporations, using technology and magic to chip away at – or reinforce – the systems that trap most people in a dependent cycle of poverty and complacency. First published in 1989, it’s become the gold standard for the genre, overshadowing even the aptly-named Cyberpunk franchise.

This year, Catalyst Game Labs is releasing a new edition: Shadowrun Sixth World. In addition to being the sixth edition of the game, the Sixth World is the term used to describe the Shadowrun setting, an era in which magic has returned to the world, humanity has evolved to include multiple fantastic races such as elves and trolls, and technology is so far beyond our modern day standards that firing a gun with your mind is nothing special.

If this sounds like fun to you – and it should – you’ll likely be wondering how to get started. While the full rulebook won’t be released for a few months, Catalyst is releasing a Beginner Box this week that should hold everything a new player needs to start their life in the shadows. Is it the real deal or a corporate set-up? Let’s find out! 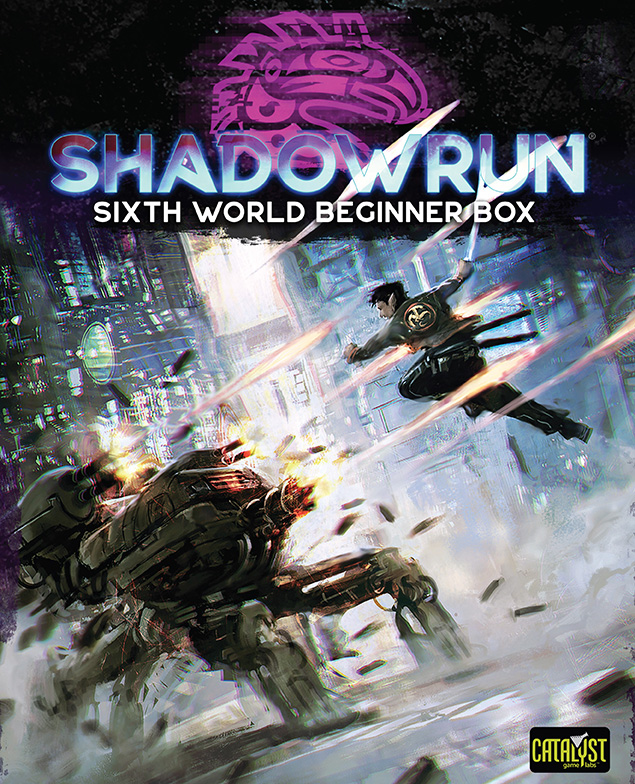 What’s in the Box?

The Shadowrun franchise has always held to the adage that more is better, and that ethos is obvious when considering the contents of this box. There’s so much stuff packed in here that it legitimately needed an instruction sheet to point newcomers towards the most important pieces. Frankly, it’s a pretty good idea: this game is an evolution of 30 years’ worth of history, and trying to orient yourself around the setting and the rules without any guidance could end up being quite difficult.

The first thing to read, following the basic instructions, is the 4-page “Instant Guide to the Sixth World”. This is a crash course to the overall setting of Shadowrun, and it’s perfectly serviceable in that role. Something that’s always made Shadowrun stand out is that the game’s history has continuously evolved with each supplement and edition: events that were major plotlines several editions ago are now just historical footnotes from years gone by. Trying to encapsulate 30 years of history in 4 short pages is pretty much impossible, so Catalyst has wisely focused on nailing the tone while hitting the absolute highlights of the setting. It’s a little on the thin side for veterans, but should be just about right for a new player.

Once you’re familiar with the Shadowrun world, there are four 8-page character “dossiers”. These cover the main archetypes: street samurai, mage, decker, and face, which roughly correspond to fighter, mage, hacker-thief, and the charming one. It’s a classic lineup, and one that’s accessible to players who are coming to Shadowrun from D&D or similar party-based games.

What’s great about these dossiers is that while they are ostensibly character sheets, the crunchy mechanical bits only take up one or two of their 8 pages. The rest is filled up with roleplaying information, like extensive character biographies that feature significant guidance on what motivates the character, how they act professionally and privately, where they like to relax, and so forth. Better yet, each dossier examines the same hypothetical mission from that character’s point of view, supplementing the narrative explanation with the rules underpinning each event. It’s a novel way to point new players in the right direction and show them not only what they can do, but how and why.

Paging through the dossiers also showcases one of Shadowrun’s greatest strengths: diversity. Of the four characters, two are women, all are metahumans (non-human races like elf and troll), and two of the four come from a distinctly non-American background. The gauzy, almost dreamlike art makes each character look both relatable and awe-inspiring. The dossiers are absolutely fantastic and set an incredibly high standard for other beginner-friendly products to meet.

Another wonderful add-on is the poster map, which covers notable sites around Seattle, the traditional epicenter of the Shadowrun experience. The back side serves as the map for the enclosed adventure, which is a great way to help bring the action to life, and having it immediately available is a huge boon for the novice GM.

Of course, the box wouldn’t be complete without the quick-start rules. Someone who’s already read through the dossiers will probably have enough information to start playing, but the GM will absolutely need to read these in depth, multiple times, before rolling a single die. Shadowrun has always been a very granular, rules-heavy game, and the current edition is no different. This document, which clocks in at more than 20 pages, could probably have been shortened slightly in order to maintain accessibility; after all, most new players probably don’t really need to know how fire damage, electricity damage, and cold/ice damage differ from each other, even if they plan on using all three regularly. Still, for an introductory package, it’s nice to have access to a pretty significant portion of the rules, even if there are a few points where the writers have admitted that the information is incomplete.

While there aren’t any rules included for character creation or character advancement, enterprising players could easily get quite a few sessions out of the characters provided, since most of the important rules (combat, healing, hacking, magic use, and rigging) are laid out clearly and mostly intact. There are also quite a few helpful charts, tables, and brief rules summaries to help make play easier, and several of these are included in each character dossier for player use. In addition, the box contains more than 50 cards, each describing a single piece of gear, which players can also reference. A clear effort has been made to save players time looking up information in the middle of a tense scene.

Lastly, the box includes a sample adventure entitled Battle Royale. Not having played it – and without revealing any spoilers – it’s difficult to speak too much of the adventure itself. A few elements of earlier Shadowrun adventures have been drastically recombined and enhanced to create a zippy, fun scenario that offers something for every character and player. There is also a wealth of advice and information for the new GM, covering topics like how to handle rules disputes and how to push players into taking action. Additionally, each scene of the adventure offers several branches for resolution, depending on what the players choose to do, and can be easily tailored on the fly for the needs of the group. Several non-player characters are given substantial background, and a surprisingly deep section on the Seattle setting offers a whole world for the characters to play in once this run is over.

There’s so much to talk about in this box, and that’s a good thing; it’s overflowing with content. In some cases it borders on excessive, but it’s easy to imagine a new player poring over these pages for weeks to soak up all the details. One of the things that crops up again and again in perusing the box’s contents is just how consistently excellent the tone is. Though the setting can be grim at times, the authors know just when to lighten the mood with a joke. Little bits of practical advice are woven throughout: as one example, in a section on how many words can be realistically said in a single combat round, the solution is to simply time what the player wants to say. That’s a pretty useful tip for any GM, let alone a new one, and including it in a beginner box indicates that Catalyst has put a lot of thought into the kinds of things that might help out novices.

Unsurprisingly, this box is definitely going to be of more value to new players than those who are already familiar with previous editions. That doesn’t mean it can’t offer something for veterans, but that demographic isn’t the focus. Those players will likely be better served by the full rulebook, which debuts in August of this year. If the quality of this box is any indication, though, the Sixth World is about to get a lot more crowded.