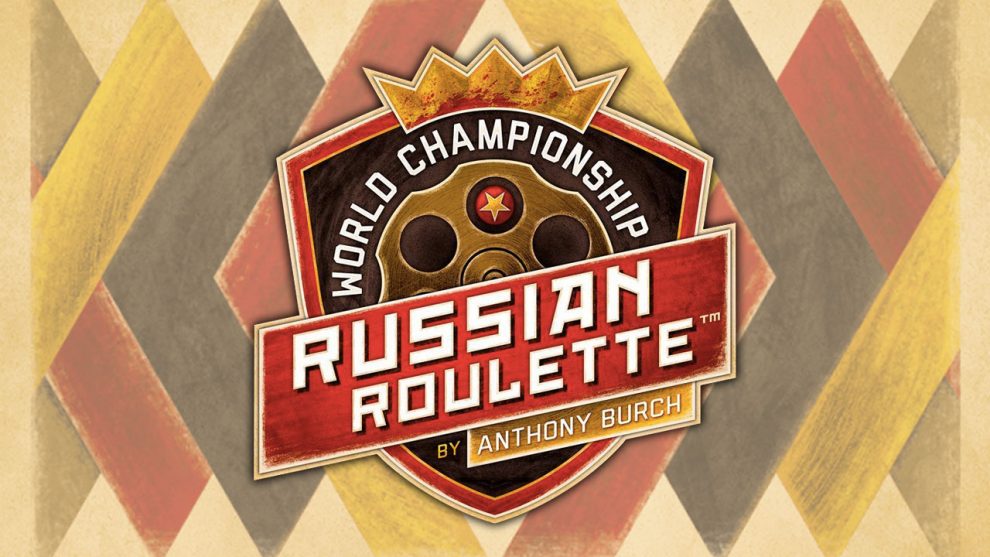 Tyler Williams
Add Comment
Do you enjoy gambling and high stakes?  Check out our review of World Championship Russian Roulette to see if you have what it takes to come out on top. Let’s take this deadly bluffing, push your luck game for a spin!

Welcome to the big leagues kid! You and your team have spun, bluffed and perhaps cheated your way to the pinnacle of your craft here in the world championships of Russian Roulette. This isn’t some back bar room gamble; no, this is a high stakes gamble where the winner takes all the fame and glory you can imagine.  Don’t worry about the losers; they won’t be around to complain. Do you have the iron resolve to pull the trigger and punch your own ticket to greatness (or the afterlife)? Find out as we play Russian Roulette by Tuesday Knight Games. 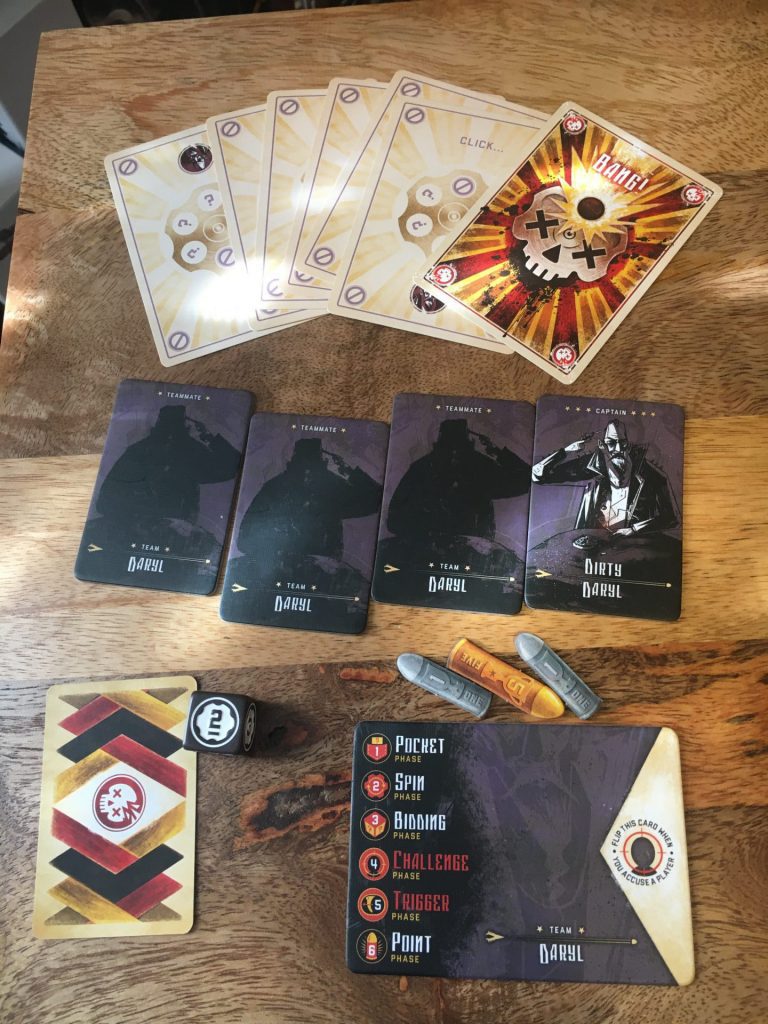 Russian Roulette sets you in the driver’s seat of your own group of four team members participating in a Russian roulette tournament.  The rules are simple: the first player to earn 15 glory points or the player with the last team alive wins the tournament. Each player starts with 6 click cards, one bang, and one special power card that allows you to bend the game rules during a certain phase of the game as detailed on the card. Players also receive a bidding die with the numbers 0-5 on it.  The game is played over a series of rounds with each round consisting of 6 phases. 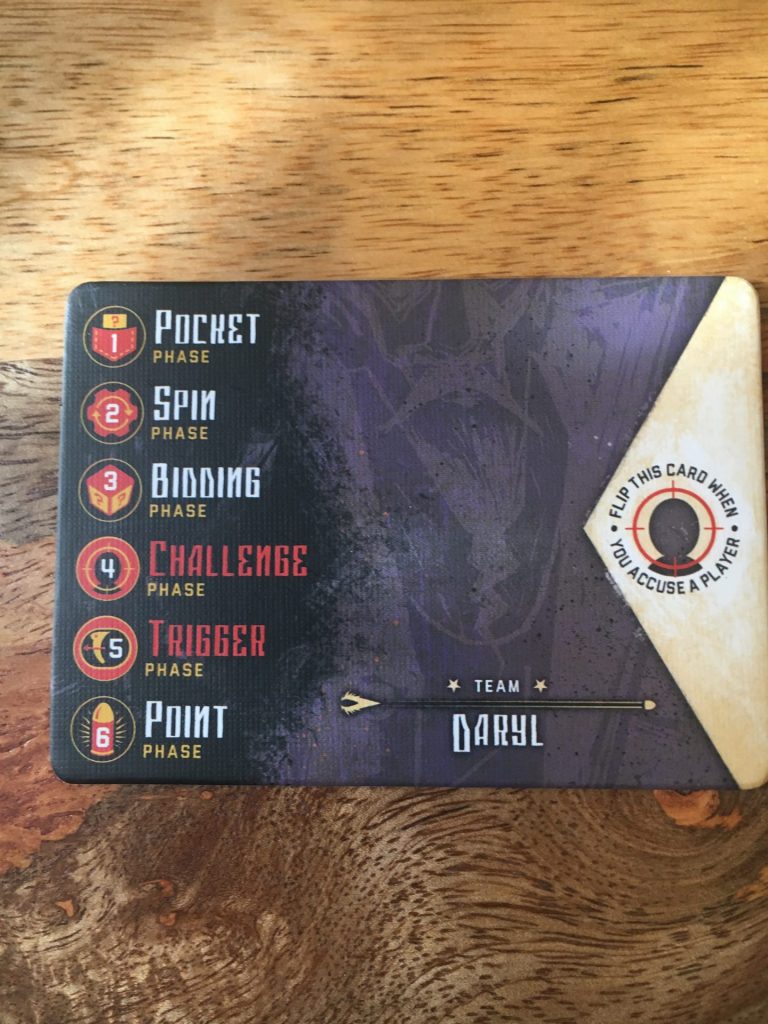 The first phase is called the Pocket Phase, where players have a chance to cheat and pocket their bang card instead of a click.  Doing this allows you to be safe from danger (usually) as you go into the Trigger Phase. If this seems too good to be true, that’s because it is.  While cheating is a nice touch, it doesn’t always pay. But we’ll get to that in a moment.

The second phase is the Spin Phase, where players simply shuffle their remaining deck of six cards.  This is a time where players can play specific power cards to mess with their opponents or help themselves, assuming the card can be played in that round. 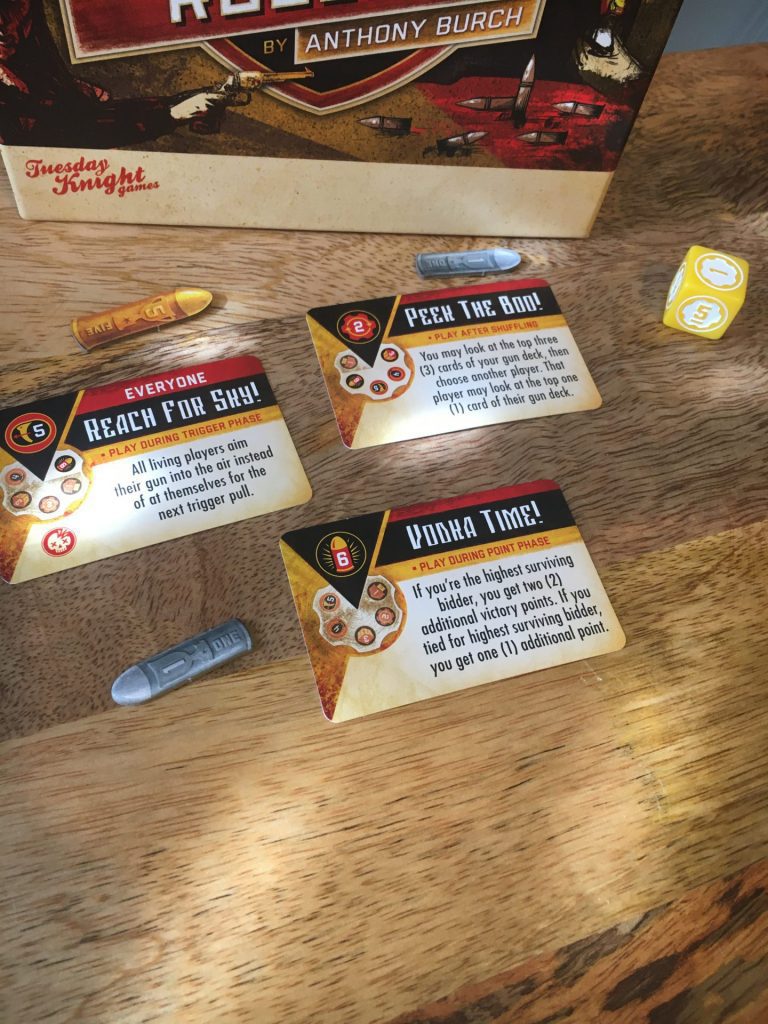 The third phase of a round is the Bidding Phase. Each player uses their bidding die to show how many times they will pull their “trigger” in the coming Trigger Phase.  This is done by flipping the number of cards equal to the dice they bid. In this later phase, players will earn glory equal to the number of times they pulled the trigger plus 1 so being risky can be very rewarding…or it can just lead to a dead teammate.

The fourth phase is the Challenge Phase. Here, players can challenge another player who they believe is cheating, forcing them to reveal their pocketed card.  If a player reveals a pocketed bang card, that player has a team member executed for cheating and the player who correctly accused the cheater gets three power cards (the rule-bending ones).  If a player accuses another player incorrectly, the accused player is offended by your accusation and gets to draw one power card as a consolation. Additionally, you, the false accuser, are given an extra bullet (bang card) for your gun. So accuse carefully! 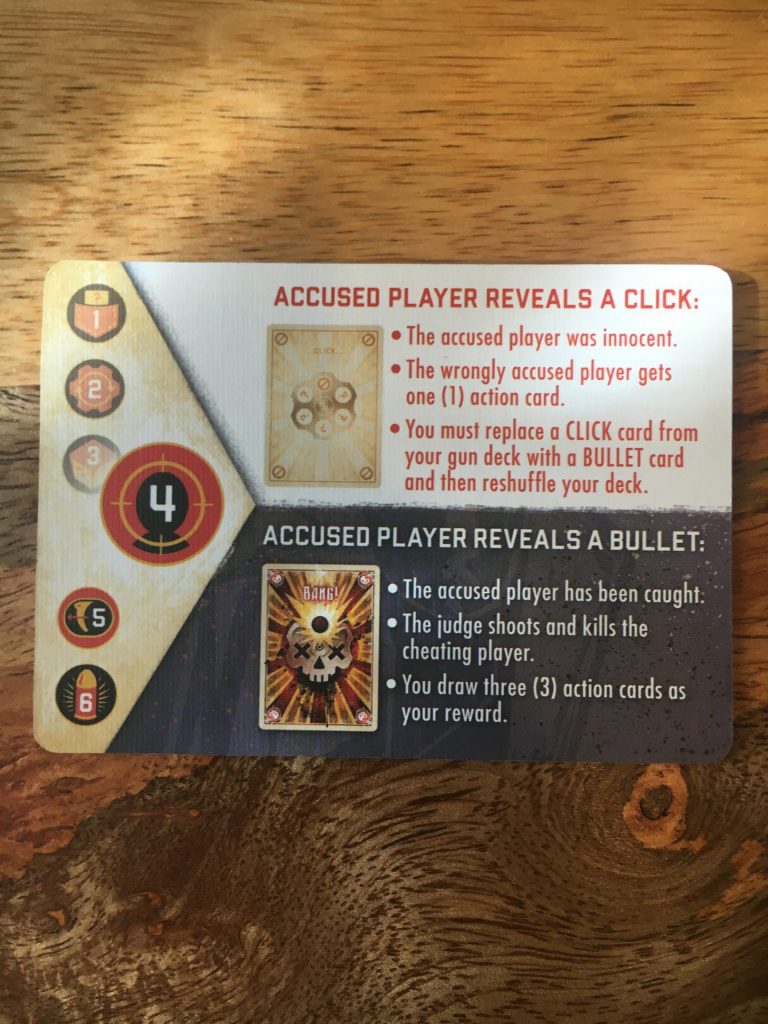 Players are able to look at the bid number on your die and make some informed calls on whether you may be cheating. While it can be tempting to pocket your bang and then bid five on your die, it can spell an easy accusation for you in the challenge round.  However, this does open up some fun options for bluffing to trick players into accusing you when you are playing fairly, allowing you to get some easy cards. The mental psych-out options are endless here and are a great part of Russian Roulette.

Are you Feeling Lucky Punk? 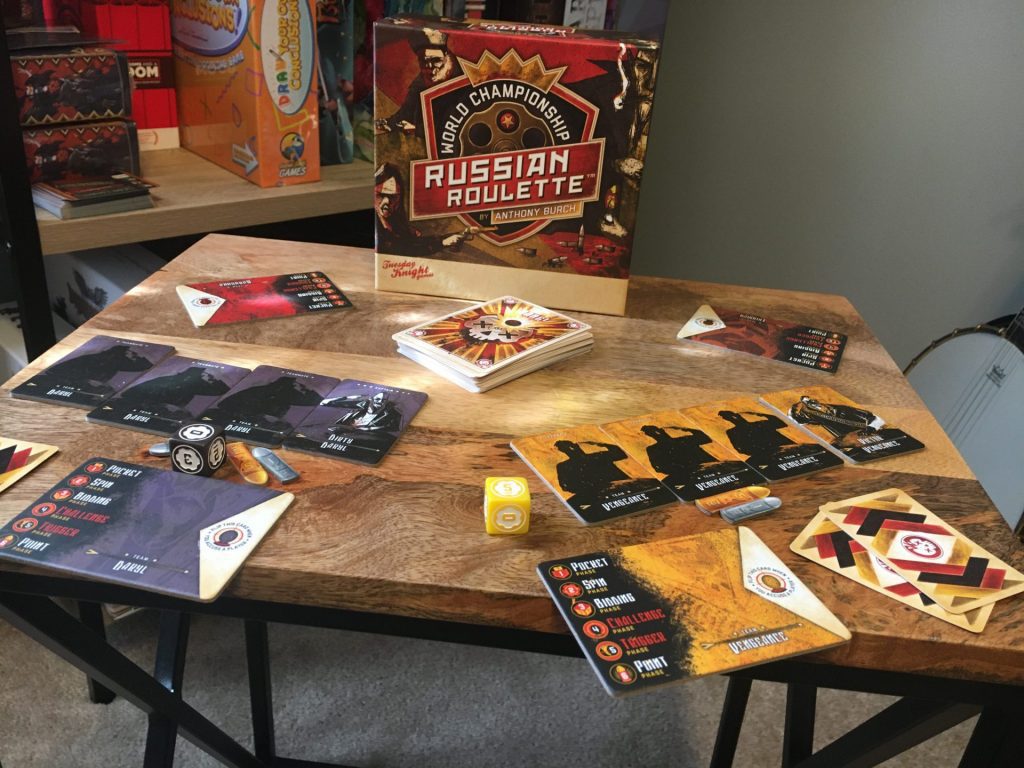 After all challenges have been issued, we move to the Trigger Phase.  Here, players simultaneously reveal cards from their deck up to the number they each bid on their die. If a player reveals a bang card, one of their team members is dead. Assuming they have other “lives” to play with (remaining team members) they will clean their gun by removing any extra bang cards that may have been added through cards or mistaken challenges and draw one power card: death isn’t all bad!

Finally we reach the Point Phase of the game, where players gain points equal to the number of times they pulled the trigger, but this only applies to players who did not reveal a bang card or get shot in some way. After this, you collect all of your click and bang cards and start at phase one again until only one player’s team remains standing or someone reaches 15 glory points.

Say Hello to my Little Friend! 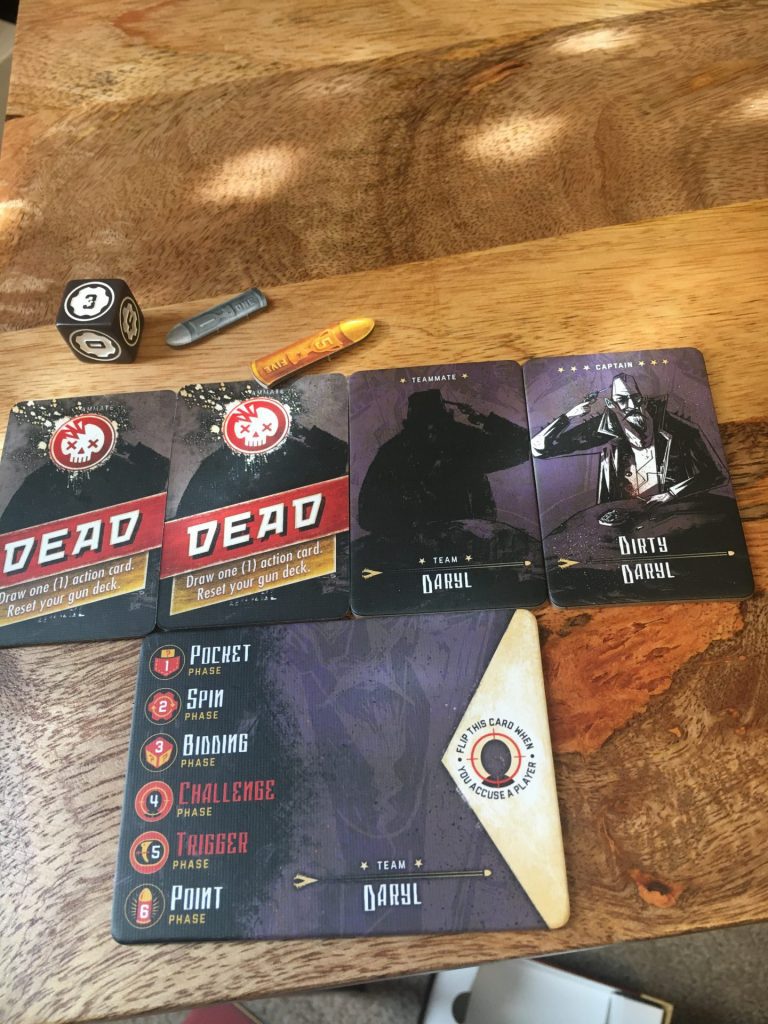 Russian Roulette is a slick and quick group game with a morbid theme that I just love to get to the table. It is quick and easy to teach, but is not lacking in depth thanks to the bluffing, bluff challenges, and knowing when to best use your power cards’ abilities. There is a fun balance of figuring out when you may need to sacrifice a team member to clean your gun or gain a card and when it is best to bet big and risk it all!  This tension provides an intense match that plays in around 20 minutes.

I do not see many issues in Russian Roulette to count as negatives.  Some groups may find the theme a bit harsh, or perhaps may not love the ability to cheat your way to victory (legally in the game, of course), but these are aspects I found unique and very fresh for such a short game.

If you are looking for a party game that’s on the quicker side but does not lack in depth due to the time constraints, you will love what Tuesday Knight Games has brought to the table with Russian Roulette.

Genre: bluffing, bidding
Pros: quick, seats up to 6, nice depth and replayability
Cons: theme may be too dark for some, legal cheating may not work for some groups.
Rating: 7.5/10 a really solid “quick” game that is staying in my collection. 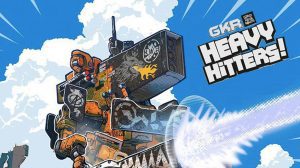 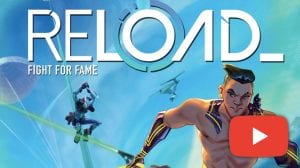 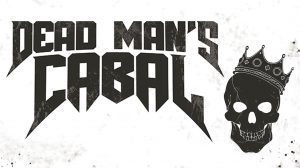 What is a lonely necromancer to do when none of his friends RSVP to his party?  Raise some new ones of course! Read our review of Dead Man’s Cabal, a... 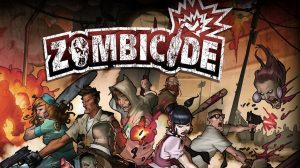 Have you ever wanted to fight hordes of undead but don’t have the time for tedious set-up? Check out our review of Zombicide Mobile. Game on the go in the app...