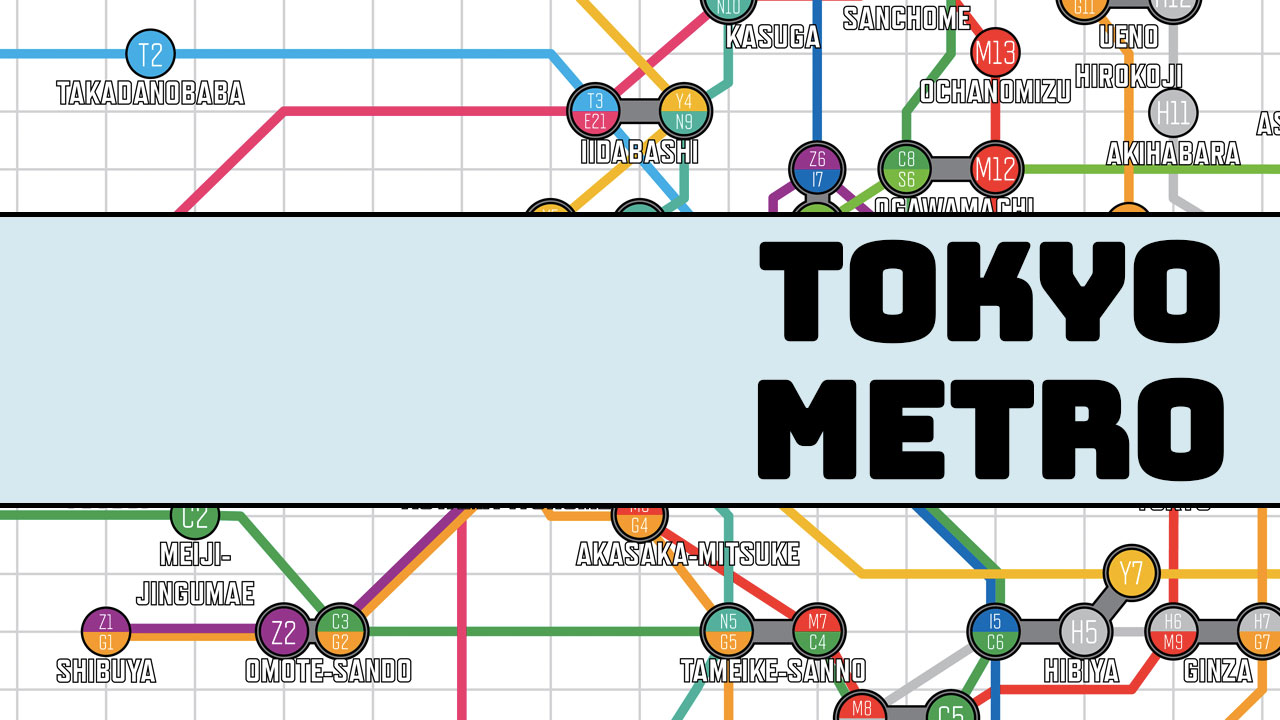 Tokyo Metro is a game inspired by the lucrative and intertwining train lines of Tokyo. Check out our review of Tokyo Metro and see if this unique economic simulation is for you.

The metro lines in Tokyo are intertwined and navigating the trains requires a study both in the destinations and the lines that connect them. Navigating these railways was the initial inspiration for Jordan Draper’s new game, Tokyo Metro (read about his process for designing the game in the Tokyo Metro designer diary).

In Tokyo Metro you take the roles of an investor in train lines in Tokyo. The core gameplay revolves around worker placement, but that just drives the investing. The real puzzle of the game is around route building, developing an economy, and speculating on your opponents’ lines.

The goal of Tokyo Metro is to be the richest investor at the end of the game and, depending on player count, it will last for 7-9 rounds. Each round, players will place workers to take actions. Once all players have finished taking actions, the active trains on the metro will run causing the value of trains to increase.

On the board you’re represented by a player piece. Before each round, you’ll get to move your piece a few spaces around the board giving you access to different station makers.

Jordan has done a video that details the how the gameplay works that you can find here so I won’t go through all of the details, but I’ll cover the highlights here.

One of the most important things you’ll do in Tokyo Metro is invest in train lines. To do this, you need to take an investment action and pay the cost for the investment action . The first investor gets the number one share, the second gets the number two share, and the number third gets the three share. Whenever someone invests in a company, the share value of the company increases on the stock tracker by the amount spent on the action. The numbered share that you receive is important because the earlier shares have a higher return than the later.

The second important action in the game is placing out stations on the board. You can place out a station marker to a stop where you are standing by taking the station marker action, assuming there is no station marker already at that stop. When you take the action you also pay the cost associated with the worker placement space times the number of circles of the station where you’re placing your marker (one, two, or three).

Each round concludes with trains moving a number of stops along their routes. Most often trains will move five spaces, but under certain circumstances they will move more. When a train hits a stop with a station where there is a station marker one of two things happens. If the station owner is invested in the train line, the stock goes up by 500 yen or if the station owner is not invested in the line they get 200 yen and the stock goes up 200 yen.

The trains will move from one end of their line to the other, turn around and continue, repeating this cycle until the end of the game. If you’re ever in a city that a train is running through on that turn you can hop on the train and get off at any stop it hits. You can also chain this action with other trains lines that intersect routes.

The final mechanism of the game that I’m going to highlight is speculation. When you speculate on a line, an action you can take throughout the game, you dedicate some amount of money to that line. When the end of game occurs, players who speculated on a line get paid out up to double the amount they speculated from the train line’s value before the players who invested in the line get their share. The actual amount they get paid is up to one third of the train line’s value.

There are so many exciting things to talk about in Tokyo Metro. In a lot of ways, the game reminds me of some of my favorite games. It has really interesting route building like the Age of Steam series, depth of planning and utilization of other players resources from Indonesia, and a high degree of spatial and economic planning like 18XX games. I’m not saying Tokyo Metro is any of these games, and it certainly is more approachable than many of these, but the structure and planning reminds me of the tensions of those games and the planning required to be successful.

The aesthetic of the game is also very enticing and unique. All of the components fit in a box much smaller than most games with similar depth. The artwork and graphic design of the game fades into the background while you’re playing but keeps me focused on the game. In that respect, the artwork is the video game music of board game artwork – interesting and detailed enough but not intrusive enough to pull my focus from the gameplay. In order to make the overall aesthetic and small box work, the board and stock chart are made of cloth and I really like this change. The cloth boards work incredibly well and I hope more publishers opt to make that decision. 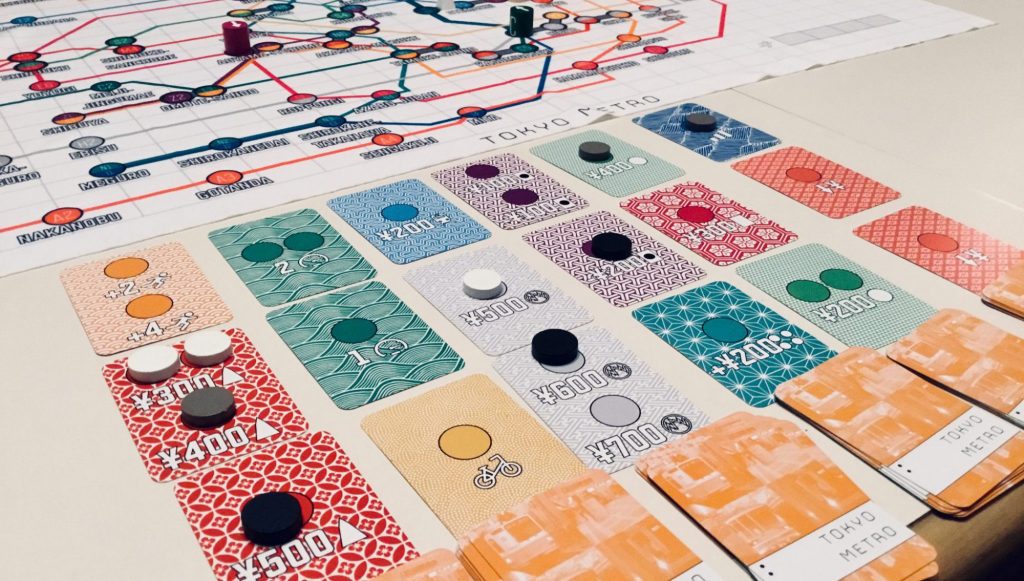 One thing I have found in my plays is that I tend to run lighter on money than I’d like. Even though this is more of a function of how I play than the game itself, I’m excited to try out the Metro Drinks version of the gameplay. This is an expansion for Tokyo Metro using another one of Jordan’s games, Tokyo Jidohanbaiki. In Metro Drinks, there are an additional set of actions available which let you place out drink tokens on the board and gain income from them. 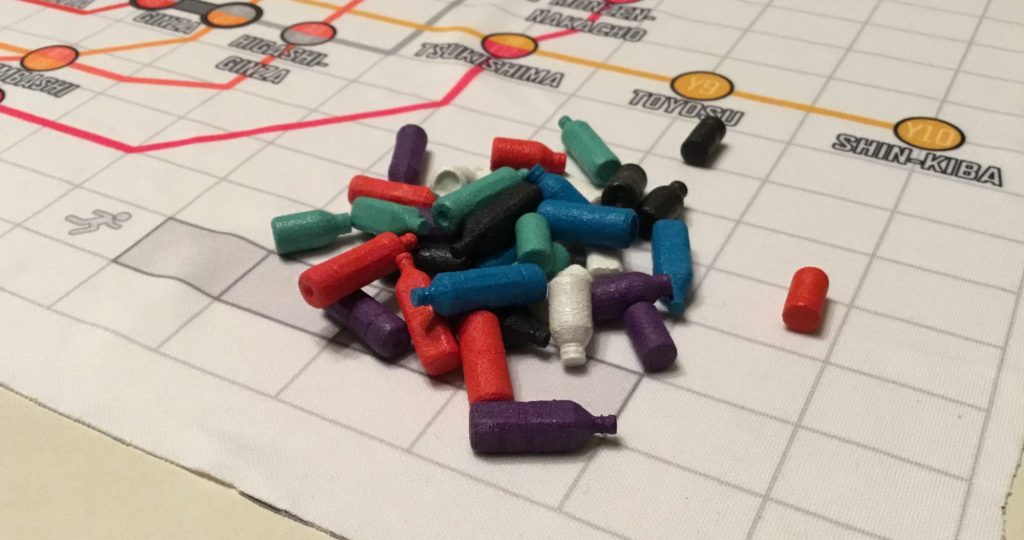 Outside of the core gameplay that I described above, there is so much depth available that I didn’t have room to get into. From the speed tokens, which increase the number of spaces a train will hit each turn, to the turn order bidding, which periodically may be the most important thing you do each round, to the action spaces which discount station building, there are so many interesting aspects and intertwining systems that make the gameplay enticing and provide a high amount of replayability and strategy.

I can’t wait for Tokyo Metro to be released. After my first play, it jumped to near the top of my anticipated games of 2018 list, and with subsequent plays I have been able to dig into the numerous layers in the game. With the exception of the speculation payouts, the gameplay is very easy to learn, but the results of your actions have consequences that you may not fully grasp after just one play. From the first turn onwards there are interesting decisions that you need to make. It is necessary to select and invest in the right train lines early on to get the long-term value that you need, but it is also important to have stations on lines where your opponents’ trains will hit so that you get income. On top of all of that, it’s important to be defensive of your stock values since players can easily come in and poach profits if you make a company valuable.

All of this together is what makes Tokyo Metro stand out to me. If you’re looking for a deep, challenging game I highly recommend you take a look at Tokyo Metro. It is on Kickstarter right now along with two other games from Jordan. Check that out here.