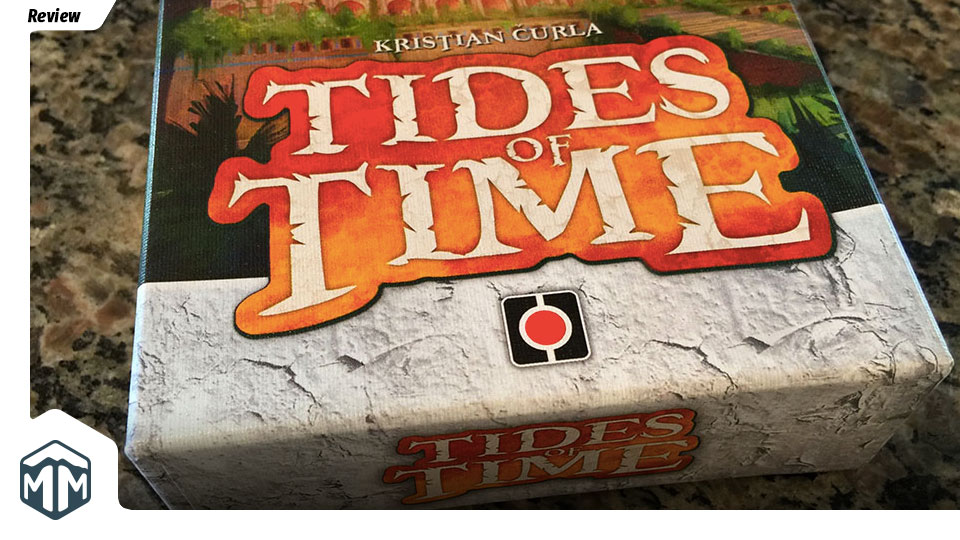 In Tides of Time players will draft beautiful tarot sized cards and compete to build a kingdom which will best stand the test of time. The goal of Tides of Time is to score the most points at the end of 3 rounds of play.

How to Setup Tides of Time

Tides of Time is a fast game, and easy to set up. Shuffle all 18 cards together, then deal 5 to each player. Each player will also receive two relic tokens (more on that in a moment). 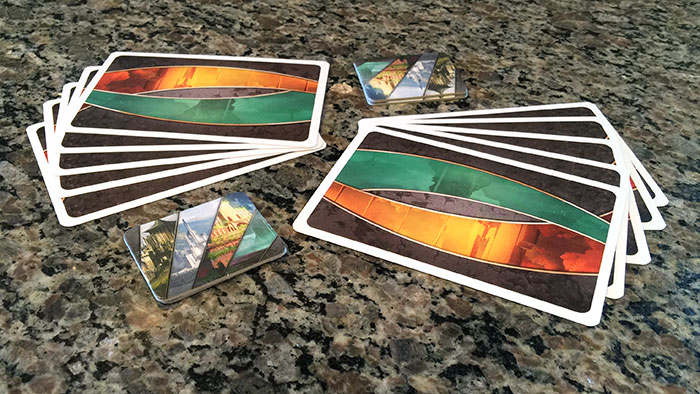 How to Play Tides of Time

Following the objectives and icons on the cards, each player will select a single card and place it face down on the table. When both players have selected their card, reveal the face down cards. Then each player will pass their hand to the other player. Repeat until each player has 5 face up cards in front of them. Players will then score each card based on it’s scoring objective (more on scoring in a moment).

Players will take all face up cards into their hand. Then they will choose one card to keep for the next round by placing it face down in front of them and laying a relic token on top of it. Players will also choose one card to destroy by putting it back into the box where it will remain for the rest of the game. The remaining 3 cards are kept in their hand for the next round.

At the beginning of Round Two each player draws two cards from the deck to bring their hand back to 5. Both players then reveal the relic card chosen at the end of the previous round. Gameplay in Round Two is identical to Round One. At the end of Round Two players will assign their last relic token to another card, and destroy another card.

Gameplay in Round Three is identical to Round Two, with players revealing the relic card chosen in the previous round, and by drawing their hands back up to 5.

Cards in Tides of Time are broken down into 4 main objective types, with various combinations of Palaces, Temples, Strongholds, Libraries, and Gardens. 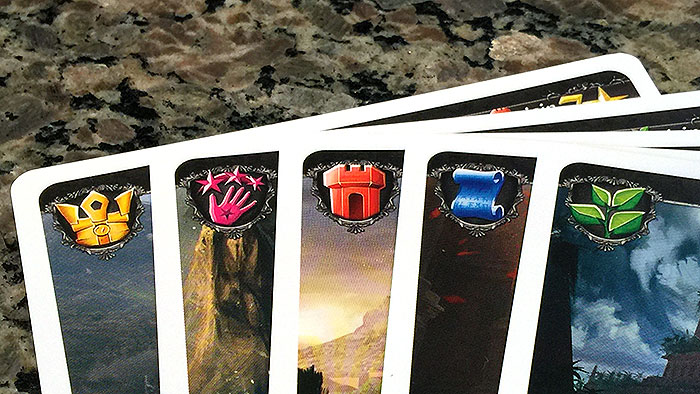 Cards: The Citadel of the Prophets, Eternal Palace, The Jinn Shackles, The Vestibule, God’s Baths 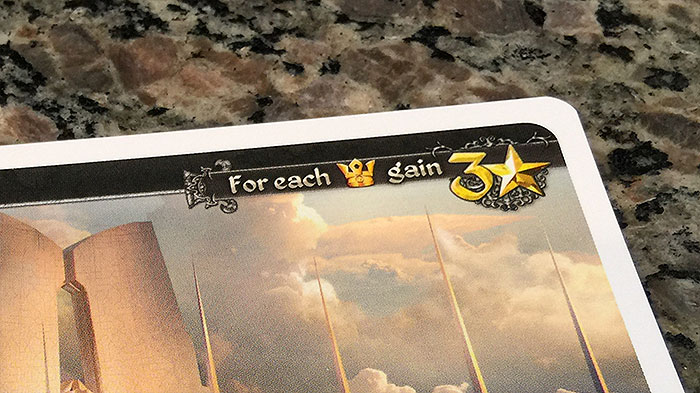 Cards: The Mana Well, The Maze of the Damned, The Sky Pillars

Multiple sets rewards you for collecting cards from more than one suit into a set. Sets of 2, 3 and 5 are available each with different point values. 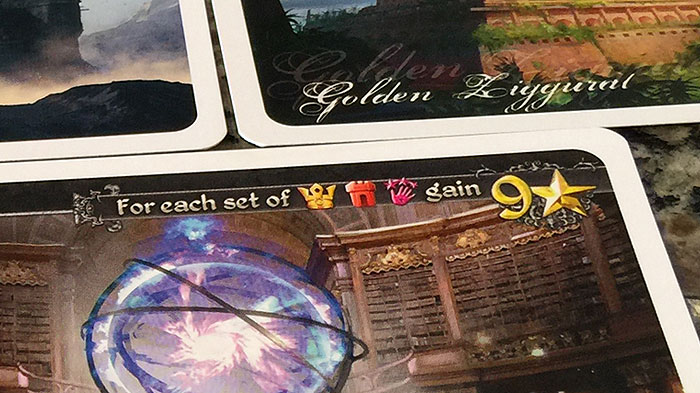 Cards: The Eye of the North, King’s Nest, The Molehill, The Roof of the World, The Sapphire Port

Cards in this category modify existing cards, or provide bonuses for single cards.

For example: The King’s Nest allows you to win all ties, which is useful when scoring Majority collections.

The Roof of the World doubles the icons on cards in your most numerous suit, meaning that if you were attempting to collect Single Suits of Strongholds and had two of them, you’d now have 4, scoring you 12 points. 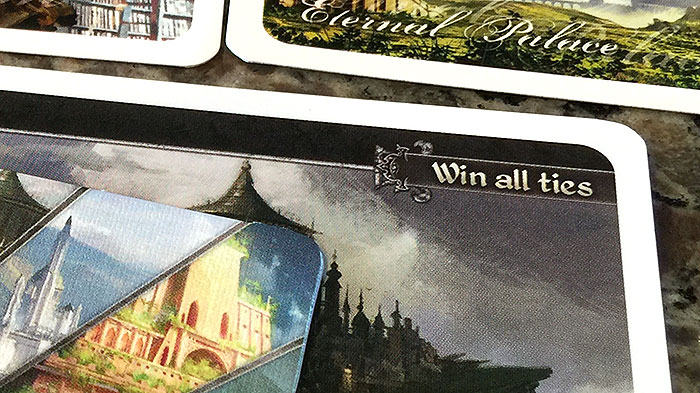 Scoring occurs at the end of each round. Players review each card for the objective and score on the included scoring pads. Let’s walk through a sample hand to see how it scores.

Player one has the following cards.

Making their total for this round 16 points. 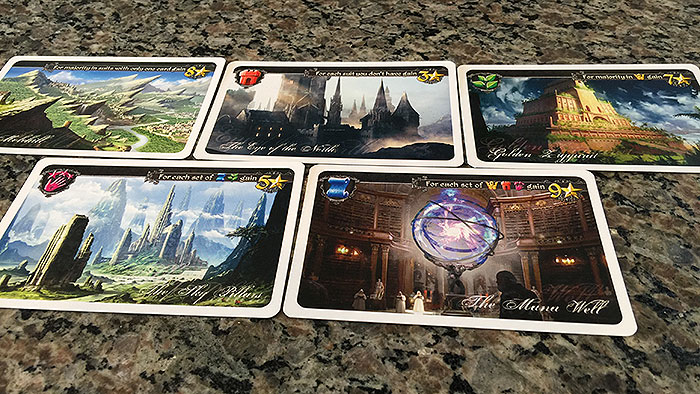 Tides of Time is gorgeous. The art is stunning…really makes me wish the game came with full sized posters. These artists should also be illustrating the covers of fantasy novels. The cards are giant sized, with a nice linen finish, which gives them a nice feel in the hand. It also helps that art really stand out.

Tides of Time is fast. The box says 15-20 minutes but once you learn the objectives, and the cards (there are only 18 after all), yours games will take much less time. In fact a 10 minute game isn’t unreasonable.

Tides of Time is fun. Of course you’re going to have to deal with luck, but there’s a good amount of head knowledge and skill involved in the game. Deciding what you want to play, balanced against what you think your opponent might play leads to some pretty thinky moments.

What I Dislike About Tides of Time

While I enjoy this game, it can sometimes end up being a little too dependant on luck. In each game every one of the 18 cards will be played by one of the players, but if you get a bad combination of cards, there’s it can be difficult to return from a bad round.

Also, while I do like the large sized cards, it might also be nice to have a poker sized deck like with Love Letter. Literally throw it in a pocket and you’re good to go.

Final Thoughts on Tides of Time

All in all Tides of Time is a great little game, one which is also fairly inexpensive. I think I picked up my copy for around $9. It’s light, fast, and very interesting to play. I’d definitely recommend it for anyone who loves two player games.