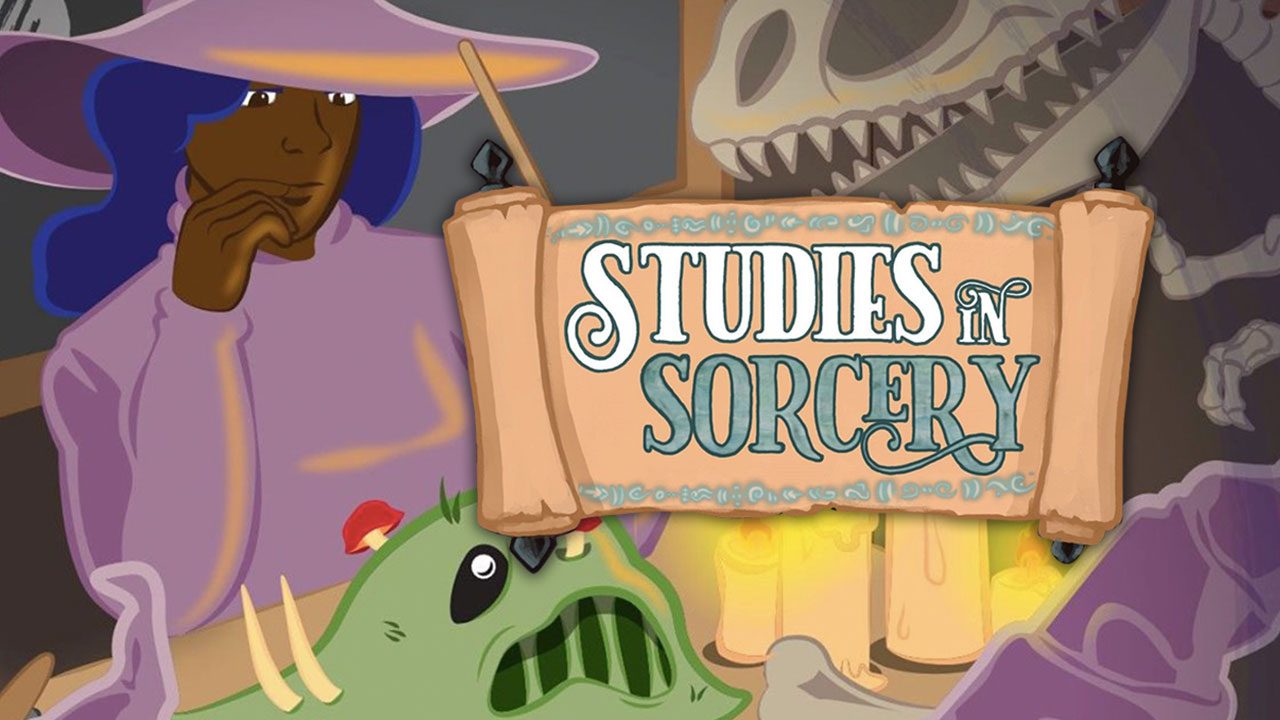 Earning your postgraduate degree isn’t easy, but it can be fun...even when the subject matter is Dark (Arts). Read Ian’s review of Studies in Sorcery from Weird Giraffe Games before backing it on Kickstarter today!

Ah, college! I remember it like it was yesterday. Late-night parties, last-minute cramming, digging through gravesites to find components for an unstoppable necromantic creature…

Okay, that last one is something you’ll (hopefully) only encounter while playing Studies in Sorcery from Weird Giraffe Games. In this title, now on Kickstarter, players will be completing a variety of magical projects to earn their Master’s degree in the Dark Arts — or as I like to call it, their “PhD in horribleness”.

Over the course of a game, players will need to pick their curriculum by purchasing projects, shrewdly manage their available resources through drafting, and assign those resources to their projects in a timely manner to earn credits towards graduation. At the end of the game the player with the most credits is the winner.

Each game of Studies in Sorcery will take place over 16 rounds: 4 months, each consisting of 4 weeks marked by different phases of the moon. Every week, all players will get a chance to take an action, work on their projects, and turn in any completed projects for credits. Completed projects will also often grant a special ability or action to help make future projects that much easier.

To start a week, each player in turn order will take one action from the 4 available: Cram, Purchase, Dig, and (take a) Project Action.

The Purchase action is perhaps the most straightforward of these. A player can trade any of their acquired Grave cards for the value printed on them, then spend that money to take new projects for their curriculum or pick up one of the Stock items (candles and vials) that see use in many different projects. Any unspent funds are lost, so choose wisely!

The Grave cards come from taking the Dig action. Whenever a player Digs, they participate in a Winston draft. For those not familiar, a Winston draft involves multiple piles of face-down cards. In this case there are always 3 piles. The drafting player looks at the first pile and decides either to take that entire stack (ending their draft) or continue to the next, where they face the same choice. The player adds a new face-down card to each stack they leave behind. If a player opts not to take any of the piles available, they can instead take a Stock card for free.

In each round, every player will be able to assign 2 of those Grave cards to their various projects in process, hoping to match each element on the project to one on a Grave card in order to complete it. This option is available to all players in addition to the other actions — it has its own phase — but an eager student can also take the Cram action when it’s their turn to assign 2 additional Grave cards for a total of 4 in a single round. Whether that’s a good move depends entirely on the project.

Projects come in 3 numbered difficulty tiers and a variety of thematic “majors”. Alchemy is a great example: these projects can be powerful indeed, but they’re painfully slow since the player can only add 1 resource per turn without incurring a penalty. Most projects offer a significant bonus on completion — one-time effects, ongoing abilities, or unique actions — so there are times you might want to rush your potion even if it costs you credits in the long run. If a player has an eligible Project Action available from one they’ve already completed, they may use it in place of the other options listed earlier.

Once all players have finished a round (take an action, assign 2 Grave cards to projects, and complete any eligible projects) the moon tracker moves to the next phase. After 4 phases of the moon, a new month begins. The first set of available projects in the market gets rotated out and new ones are added, slowly building the difficulty of the options on offer. The Grave piles also receive an extra card each to help get those projects started. Lastly, the first player marker rotates.

After all 16 weeks have been played, players total up the points from their projects. Unused resources are worth a small amount as well. If players are using the optional hidden Thesis cards, they may gain extra points from completing those goals. The highest credit total is the Valedictorian and the winner!

The Winston draft is my favorite drafting method and it works extremely well here both thematically and mechanically. I love digging through piles of bones and organs — in the game, mind you — to see if I can make something useful from the bits that others left behind. There’s a delightful tension between whether to take quality or quantity, to focus on the handful of things I really need now or just grab a lot of junk and hope I can use it somewhere down the line.

That carries into project selection too. While the thesis goals offer some guidance, there’s still a ton of flexibility in which specific projects to take. If you’ve already stocked up on components, stopping to snag a Reanimation project or two will almost certainly pay off. If you need to make a big play, the powerful effects attached to Sorcery projects might be more appealing.

Alchemy is slow but powerful; Reanimation needs lots of components but has strong internal synergy; Sorcery has powerful effects but is often worth less. There are also a smattering of other majors with which to experiment.

And don’t forget about the actions that completed projects open up! These can be extremely powerful if you can get the timing right. As someone who tends to think tactically rather than strategically, I’ll admit that I struggled to master this aspect of the game. It seemed like I was always one step behind, turning in my project a week too late (if at all) — which, now that I think about it, is exactly what my real college experience was like.

The “school for magic users” theme is a fairly common one, though it’s helped along in this case by a dose of delightful art that finds the right balance between cute and grim. It was also very smart to skew that theme towards the postgraduate level rather than the more common high school setting. This isn’t a game about discovering the mighty powers suddenly at your disposal. It’s a game of planning and scheduling, of making sure your Potion of Prosperity is still simmering while you’re frantically finishing your Fungal Animate.

If playing against other aspiring occultists is too hectic, there are also rules for solo play. Replacing a competent drafter isn’t an easy task and personally I didn’t find that style as enjoyable as playing the full game. If you can’t conjure up a partner, I wouldn’t necessarily recommend picking this one up. What’s more enticing is the mission mode, something that Weird Giraffe has been incorporating with their newer games. Missions offer a mini-campaign where each level sets a specific goal and players try to meet that goal independently. Meet that goal and you move on; miss it and you stay on that same goal the next time you play. This offers an extra level of replayability should you ever tire of the base game. I’d also wager that one or two expansions might be available down the line — there’s room for plenty of different majors and one of the lesser-used mechanics (+1/-1 tokens) feels like it could be expanded to have even more impact. This could be a game that has a long shelf life with a few occasional updates to keep things fresh.

A clever theme and delightfully engaging gameplay make this a fantastic game that delivers exactly what it promises and a fair bit more. As far as I’m concerned, Studies in Sorcery gets top marks.

Back Studies in Sorcery on Kickstarter today!

Personal Space Review – A World of Its Own