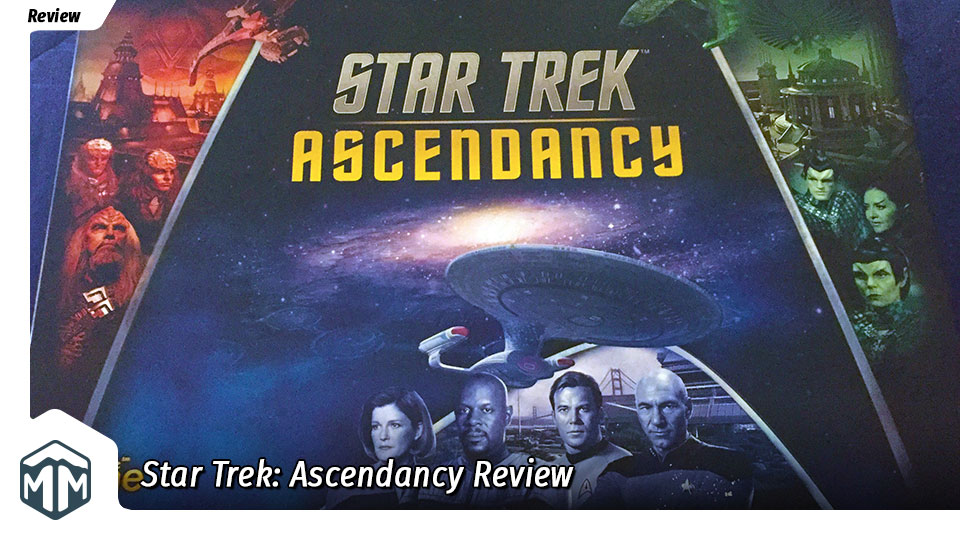 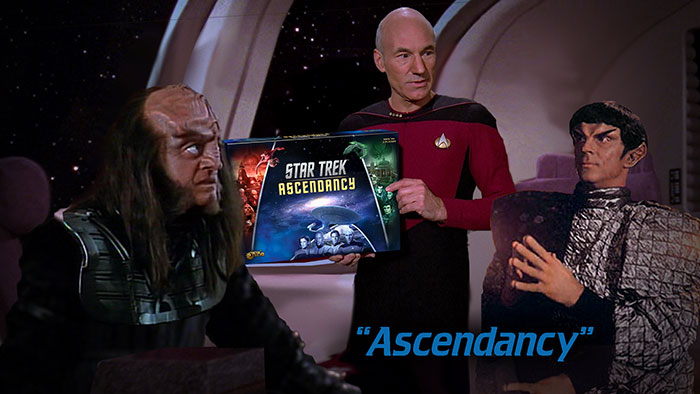 Captain’s log. Stardate 11.16.2016. War has plagued the galaxy, and plunged it into chaos and disarray. I’ve called a diplomatic summit to discuss terms of ceasefire. Delegations from Kronos and Romulus will be in attendance.

Picard: My name is Captain Jean-Luc Picard. Thank you for agreeing to these talks. It is my aspiration that we can reach mutually beneficial accords.

Kor: I am Dahar Master Kor, son of Rynar, last son of the glorious house of Kor.

Romulan: I have no interest in divulging my identity. I am here as a courtesy.

Picard: Let us begin. We have been enemies for far too long. It is time for us to come together for the good of the galaxy. If we end this destructive prolonged conflict, we have the potential to achieve collective ascendancy.

Romulan: And why should the Romulans share our victory with technologically inferior societies? We have worked from the start to improve our culture through science. 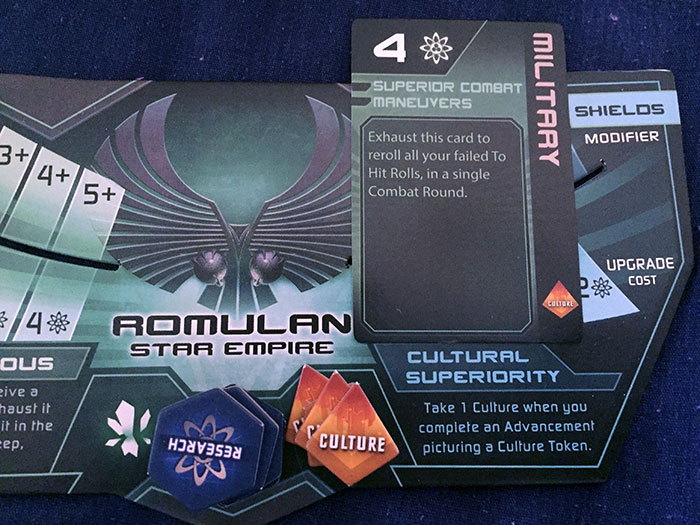 We have built superior research laboratories across our empire, spread our superior influence with planets either willing to join us or too weak to resist. 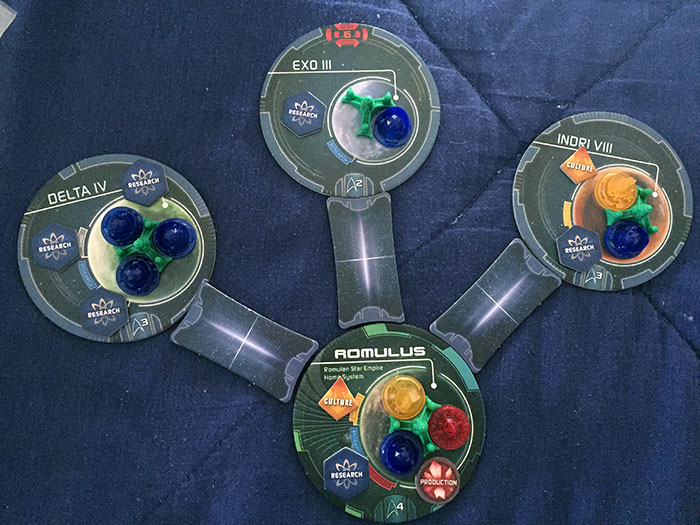 We have defended our systems, at great expense, from the primitive and barbaric Klingon war-mongers.

Kor: Primitive? Barbaric? We are not animals, nor will we be looked down on by treacherous Romulans. We Klingons have a glorious culture and a rich history. Glory is only truly obtained through battle. With every battle fought, we advance the culture of our people. 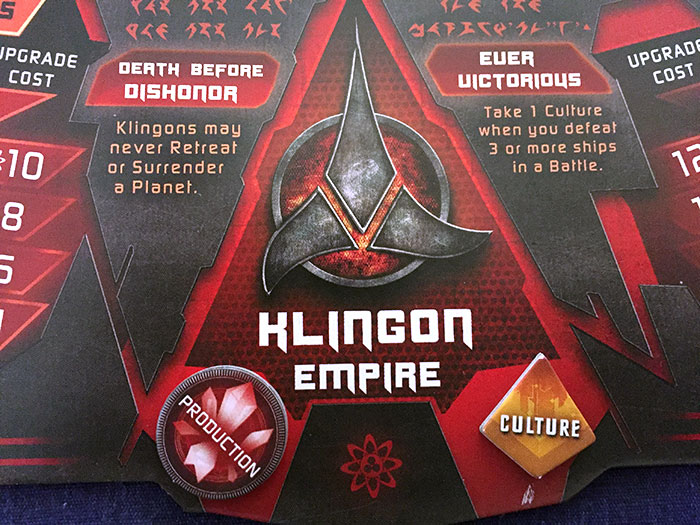 We should see how long your science lasts against our superior battle fleets. The Klingon empire is unrivaled in production. Our factories and shipyards will build us a great empire. 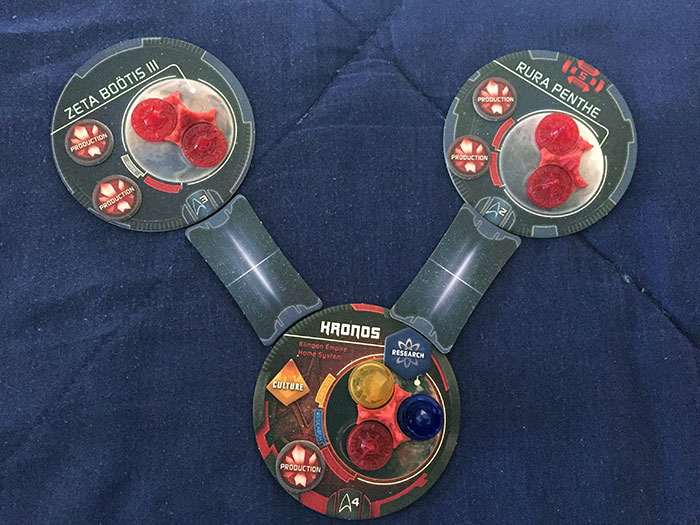 Our mighty fleets will decimate your forces and destroy your planets. None can compare to the might of our military. Our invasion forces are unstoppable and our marauding fleets will strip you of your valuable resources. 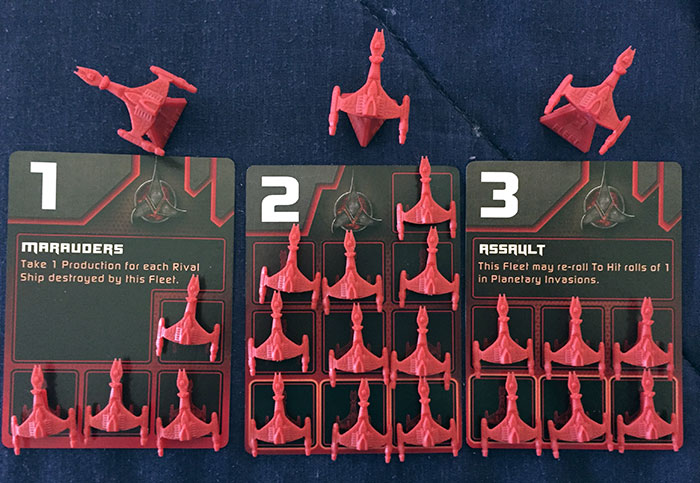 Romulan: Your desire for battle is negated by your inept military tactics. Romulans will fight when necessary, but on our terms. Our orbital mines will disrupt your invasion fleets, and our superior cloaking technology will destroy your ships before they have a chance to fire. 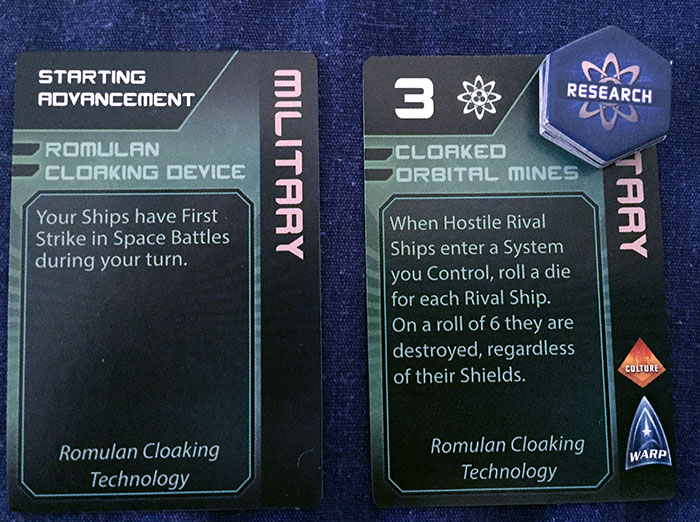 Picard: Gentlemen, please. Can’t we all just….get along?

Kor: With this pretentious, traitorous–

Picard: BOTH OF YOU. ENOUGH!! Our peoples have suffered too much. We’ve been at war for hours. Let us make peace. The true development of culture comes from a free exchange of ideas. Culture comes from exploration, finding new life and new civilization. 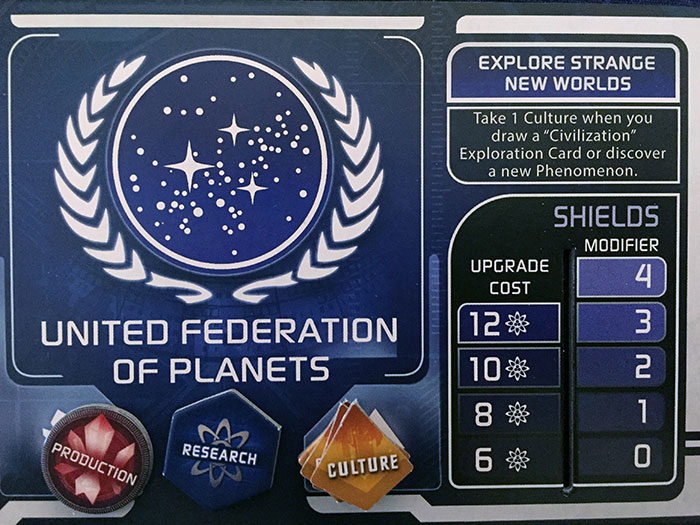 The Federation has grown not from warfare, but through diplomacy. I urge you both to reconsider your approaches. Let us make mutually beneficial trade agreements so that we may all share in the glory of an ascendant civilization. 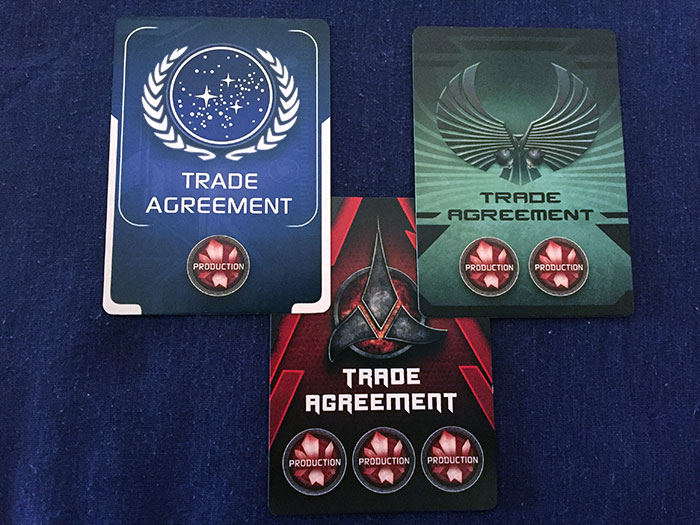 Kor: The Klingons have no quarrel with the Federation at this time. We agree to these terms. Be warned. If you dishonor this agreement by attempting to convert Klingon planets to your Federation, we will strike back and rain vengeance upon your houses with a fury greater than you have ever known

Picard: Agreed. Let us….make it so. What say you, Romulan? Will you join us?

Romulan: I make no promises.

Picard: So do we have an accord? Can we agree to a ceasefire, a cessation of hostilities?

Romulan: We shall see.

Captain’s Log – Addendum: With a grave degree of uncertainty we venture into the unknown. Relations are tenuous at best. Romulans remain suspicious and the Klingons on edge. A roll of the dice could send us back into galactic war. 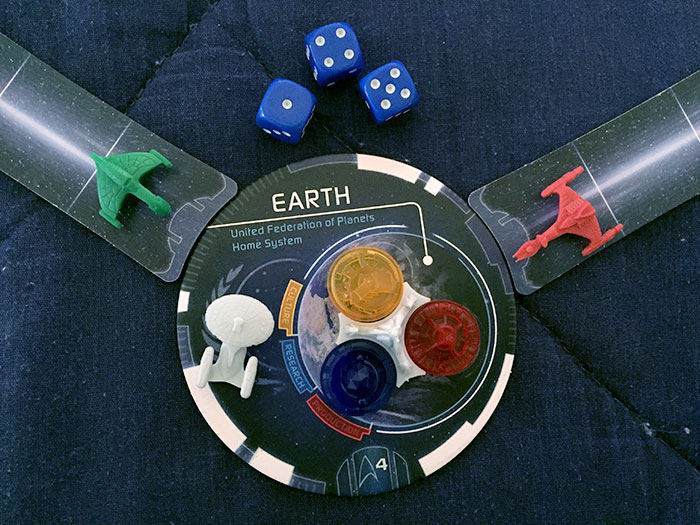 The Basics of Star Trek: Ascendancy

Star Trek: Ascendancy is an epic civilization-building game in which each player controls an iconic Star Trek faction. Players strive to expand their reach by gaining planets through conquest or diplomatic hegemony, building up a resource-generating infrastructure, and developing enough culture to ascend. 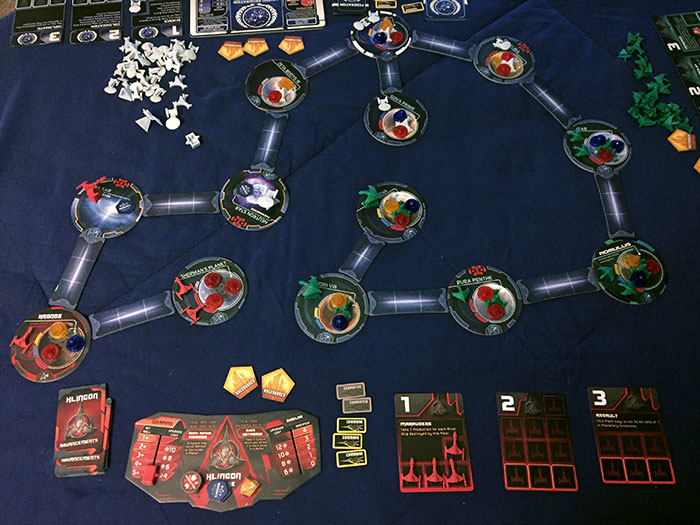 Each player starts at their own homeworld, the galaxy as yet unexplored. Throughout the course of the game, planets and stellar phenomena will be discovered and the galaxy will develop as the game progresses. 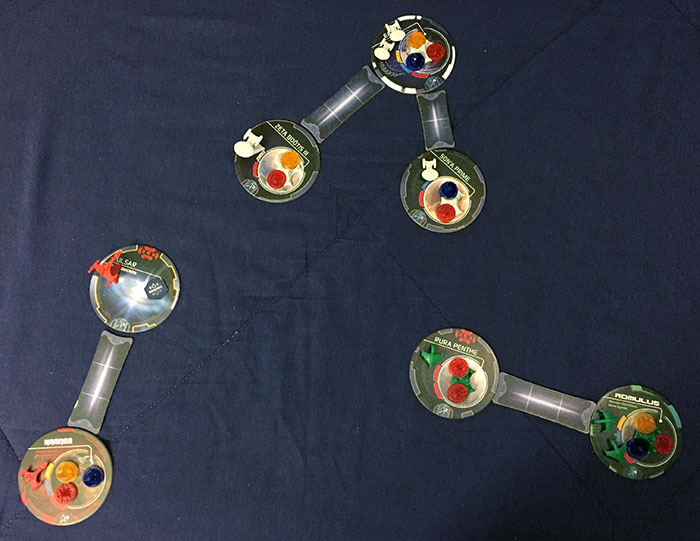 On a player’s turn, they first start out with a building phase. In this phase, players can build ships, colonize planets, commit research to technological advancements, and build resource-producing nodes of either research, production, or culture, depending on the planet’s capabilities. 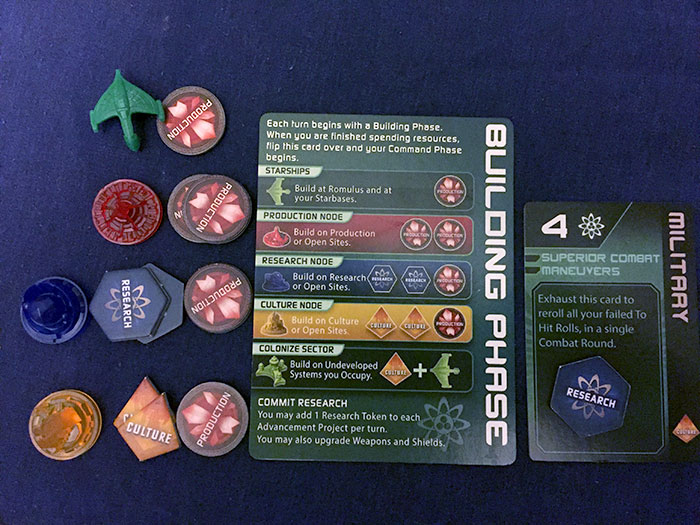 They then move to their command phase. Each player starts with five commands that can be used to move ships at impulse or at warp, initiate space battles, commission fleets or starbases, launch planetary assaults, attempt diplomatic hegemony, or launch new advancement projects. 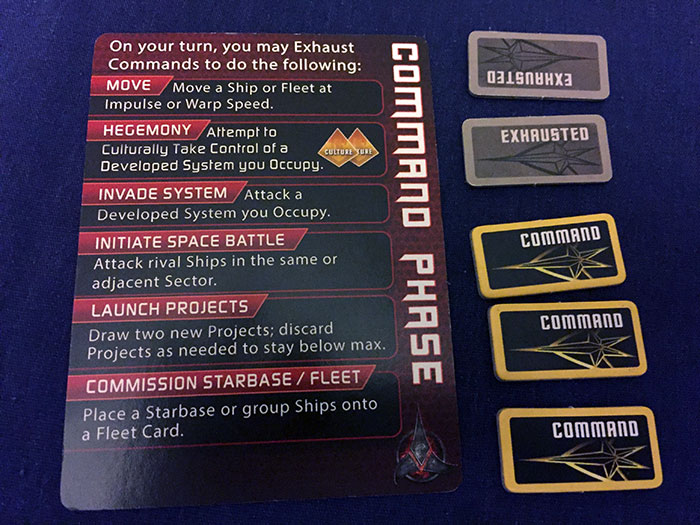 At the end of the round, planetary nodes will generate resources, either production tokens, research tokens, or culture tokens, depending on the node. Trade agreements will also provide additional production tokens. 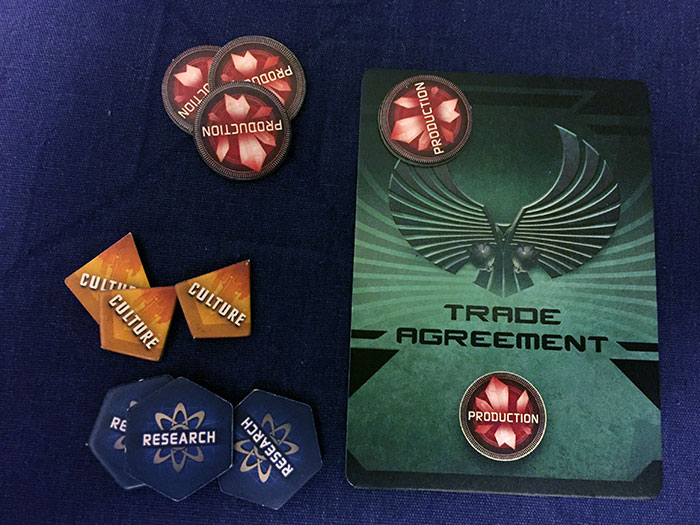 At any point on their turn, players can trade in five culture tokens to ascend. 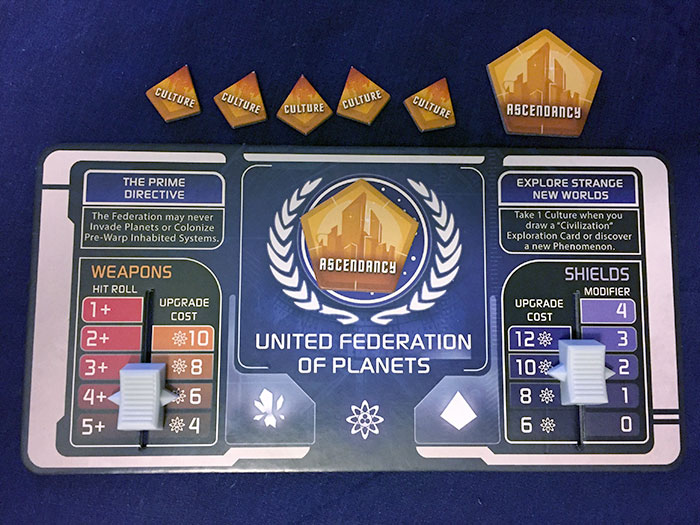 The first player to get five ascendancy tokens and maintain control of their homeworld until the end of the round is the winner. Or if you’re feeling particularly war-like, you can achieve a domination victory by conquering all three homeworlds–Earth, Kronos, and Romulus. Will you achieve ascendancy through diplomatic accords? Will your technology surpass all others? Or will you commit your battalions to complete galactic domination? The choices abound in Star Trek: Ascendancy.

My Thoughts on Star Trek: Ascendancy

I won’t mince words. I love, love, love this game. I love how asymmetrical the factions are. Each civilization offers its own unique abilities, technologies, and strategies. For those who enjoy combat, the Klingons give you that in droves. The Romulans excel at research, technology, and general engine-building. The Federation wants to spread influence peacefully and gain cultural superiority through diplomacy and exploration.

The main strength of the game is in its theme. In the most recent game that I played, we had a three-way victory brought about, in part, by the diplomatic efforts of the Federation. I’ve won a game as the Klingons by launching an all-out assault on my last turn. I’ve seen the Romulans quietly spread enough influence to steal the victory. This demonstrates the amazing way that Star Trek: Ascendancy nails the theme. It does justice to an IP that has been criminally underrepresented in board gaming.

I do have a few minor issues, though. The game unfortunately only comes with three factions. Both the Cardassian Union and the Ferengi Alliance expansions have been announced, but might not make it to us until next year. Still, each will add a new race with new ships, planets, and cards, allowing for additional players and more variety.

There is also a bit of an issue with player downtime. Waiting for the other players to take all of their actions can be tedious, especially if your group is prone to analysis paralysis. Though it’s not an inherent flaw, the game is long. Expect at least an hour per experienced player, although the rulebook does offer variants to speed up the game.

Overall, I highly recommend this game. If you want to experience the glory of Star Trek from the birth of a star-faring civilization to the height of a galactic empire, Star Trek: Ascendancy is the game for you. 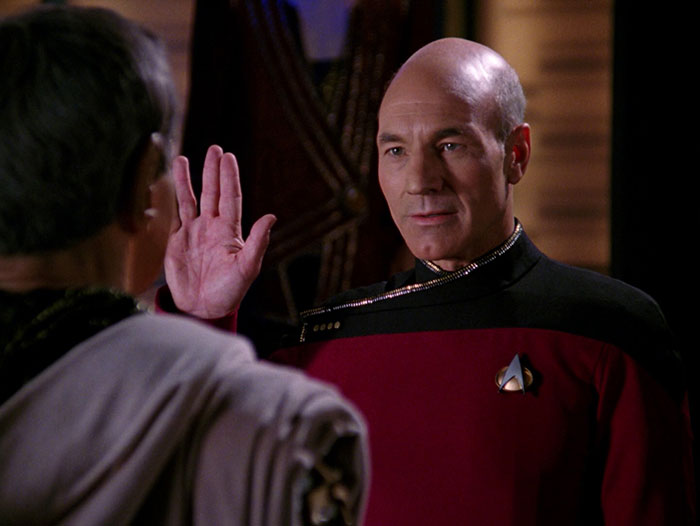 What do you think about Star Trek: Ascendancy? Give us your opinions about what you like and/or dislike about the game in the comments below!