Paleolithic, from Taiwanese designer Chih-Fan Chen and publisher Shepherd Kit, is a light and fun game about building up a village in prehistoric times. You and your kids will love rolling the dice, gathering resources, building huts and crafted goods, and most of all moving those killer animal guides around the board.

In Paleolithic players act as elders, leading their village towards a better life. Guide your people around the island of Formosa to collect clay, stone, meat, and jade so that you can construct huts to live in, build tools to improve their lives, and craft useful trade goods.

Setting up Paleolithic is a visual delight, and pretty simple too. Assemble the game board, shuffle the trade goods cards, and lay out 5 of them on the left side of the board. Mix up the hut tokens and lay out 2 of them at the top of the board. 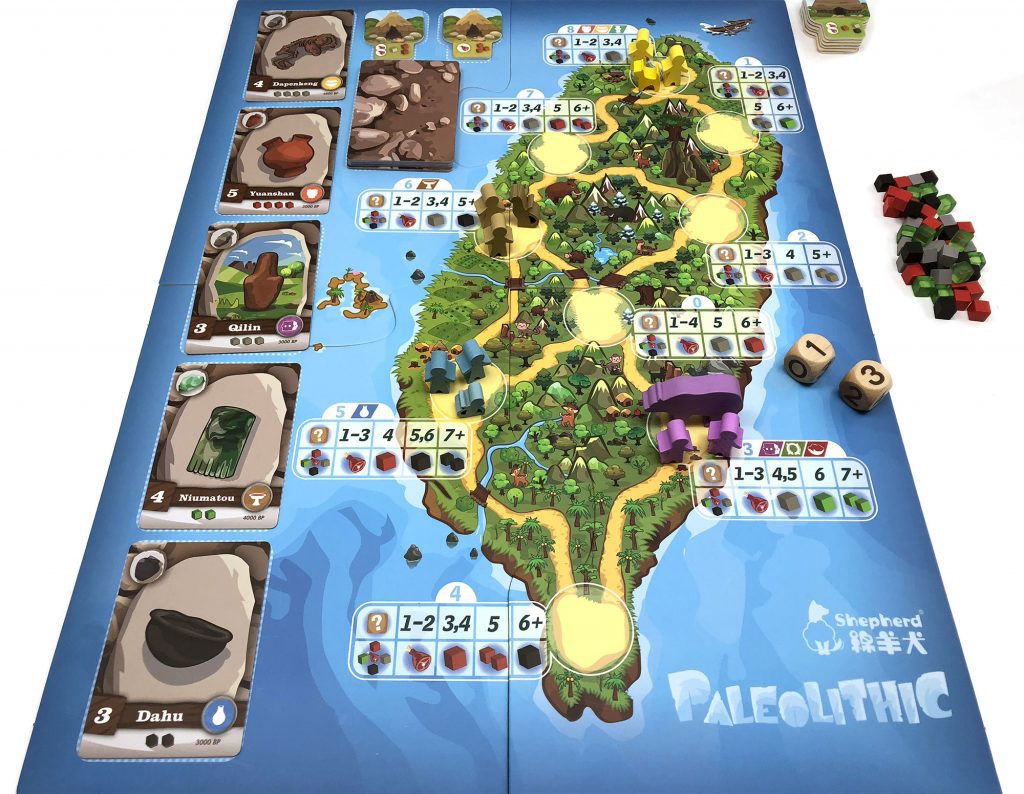 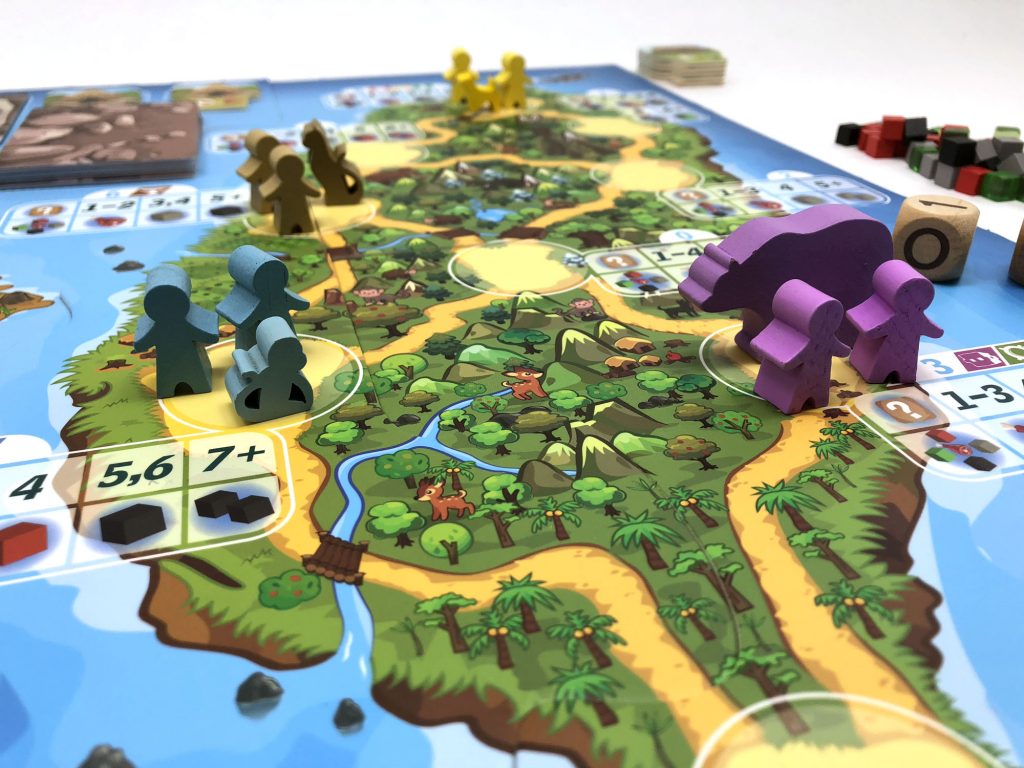 There’s not a lot of depth in Paleolithic, so turns are quick and easy. Choose one of your pieces on the board and move it from one village to another (or choose not to move). Roll one of the dice and collect resources based on the dice value, plus the total of your player pieces in a single village. In the example below purple has rolled a 4 and has 3 pieces in the same village, for a total value of 7. This allows them to collect 2 jade and place it on their player mat. 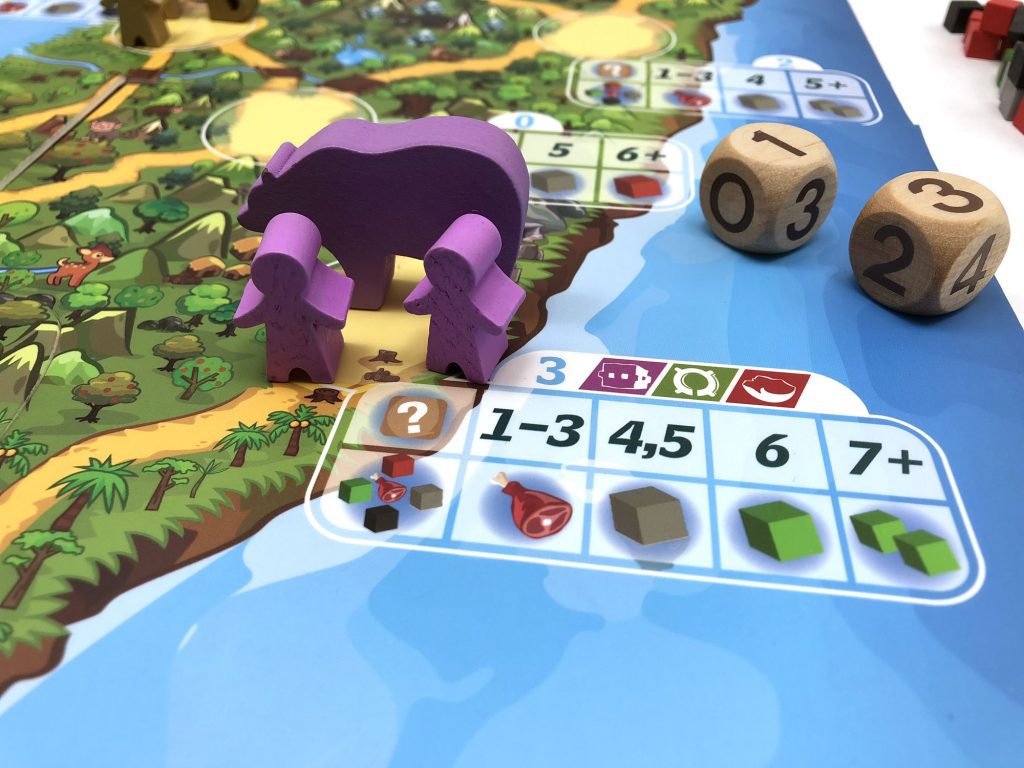 If you’ve collected the correct amount and kind of resources, then you can build a hut. Huts not only provide points at the end of the game, but also count as an additional token when determining which resources to take. Huts must always be built on a space where you already have a villager or animal guide. In the example below yellow would be able to add 4 to any roll they made because there are 4 total player pieces. 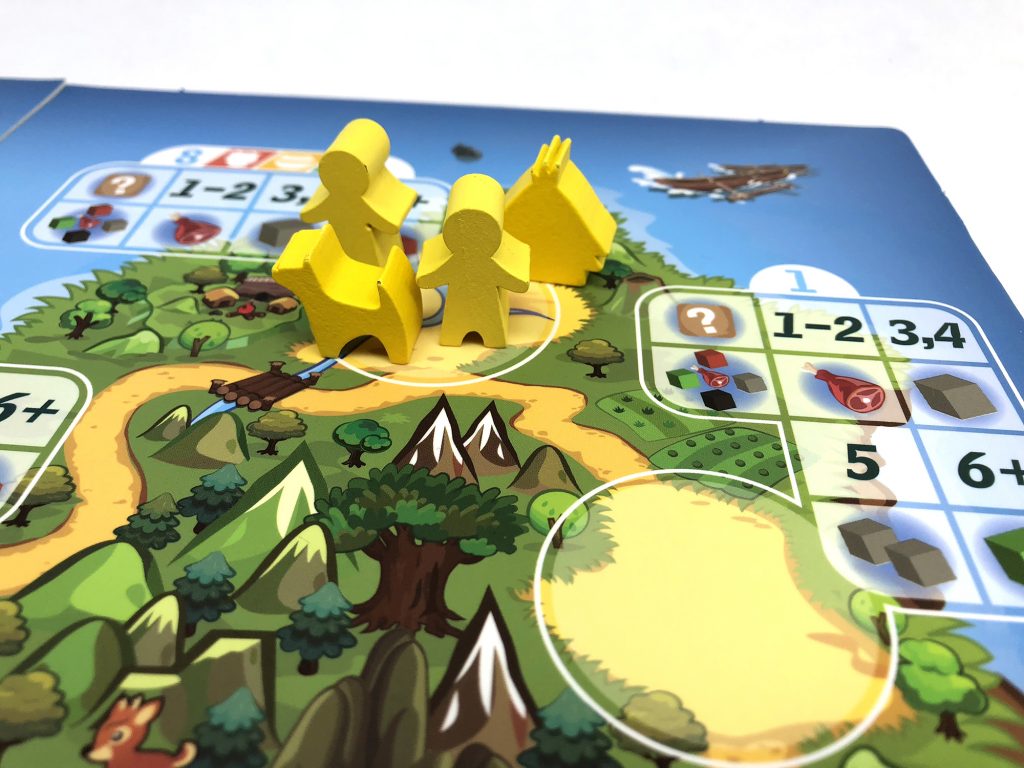 Yellow has placed a hut which increase their total player pieces to 4. 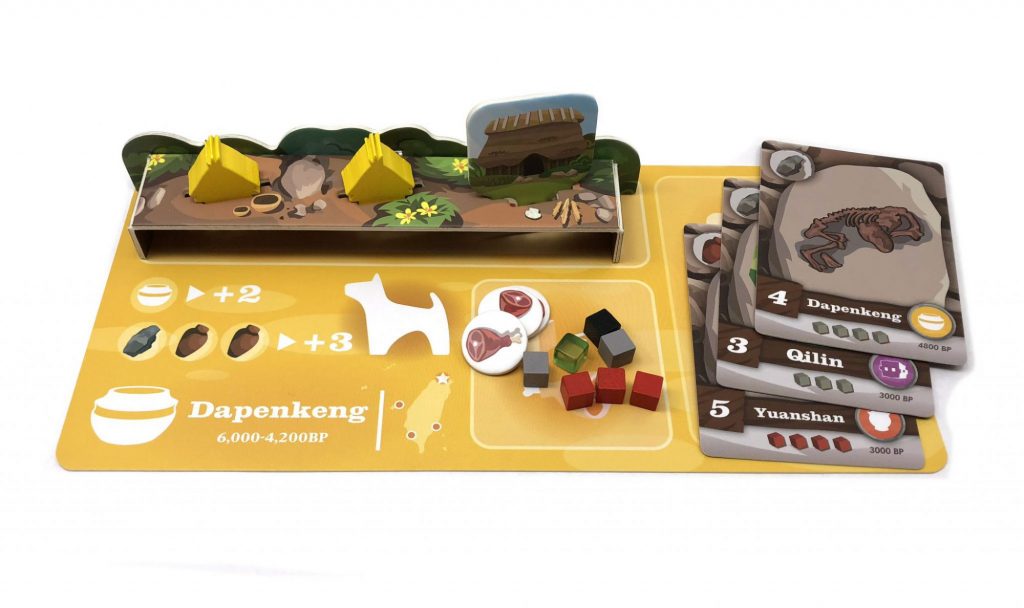 The yellow player’s game board mid-game.

In the above picture, yellow receives a bonus for each trade card whose bottom right icon matches their player mat. Additionally players receive a bonus for collecting a set of trade good cards matching their specific bonus condition (printed on the left side of the mat). Yellow will receive a 3 point bonus for every set of one stone tool card and 2 pottery cards.

The end of the game is triggered when one player has some combination of 5 trade good cards and/or huts. Points are given for huts, values on trade cards, and icon bonuses on trade good cards. The player with the highest score wins the game. Paleolithic also has two expansions which offer additional scoring options, but I’m not going to cover that here. 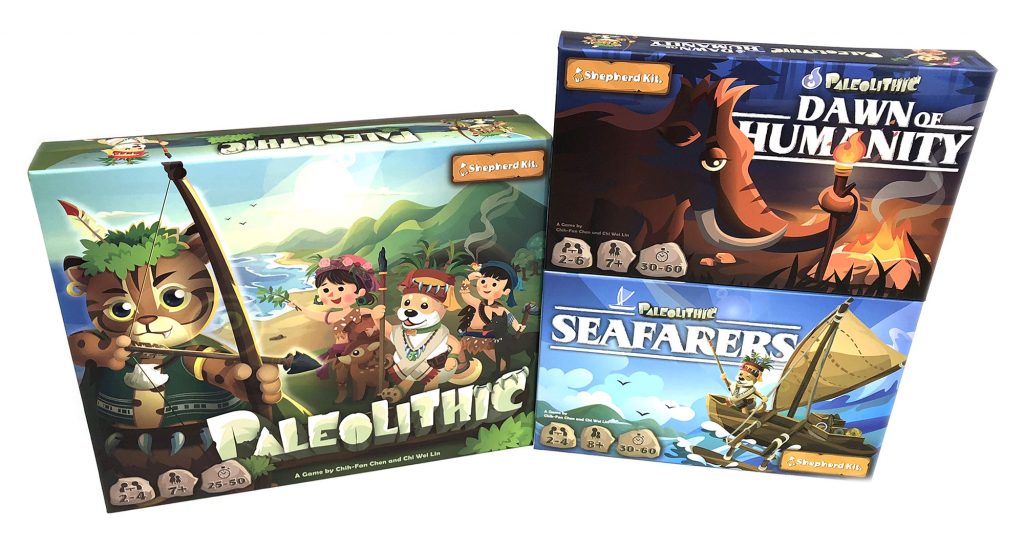 Paleolithic is a delight for the eyes. Gorgeous brightly-colored artwork, in a fun cartoony style, covers almost every inch of the board, and hidden details are everywhere on the island. But even with this detail the board is very clear and easy to understand, even when looking from across the table.

Everything about this game speaks quality. The cards and player mats are thick and sturdy, and the resource cubes are of a good size, and easily distinguishable from each other. 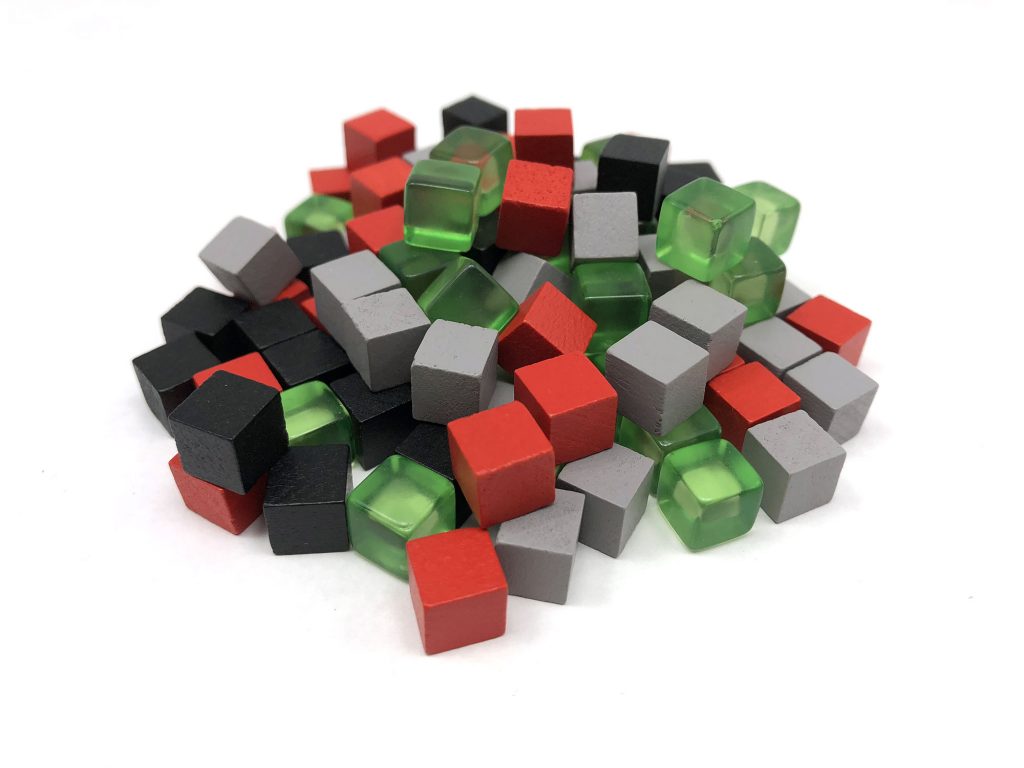 The board is a lovely 4 piece puzzle that your kids will love to assemble, although the pieces do cause some issues in the middle of the board as they turn up slightly.

One of my favorite things about Paleolithic though are the player pieces. Shepherd Kit has done a fantastic job at picking unique colors for all the player pieces…a tough job when there ends up being 8 different tribes after opening up both expansions. But they’ve also maintained the pastel color theme throughout the game. I also love the unique shape of the pieces…a nice touch. 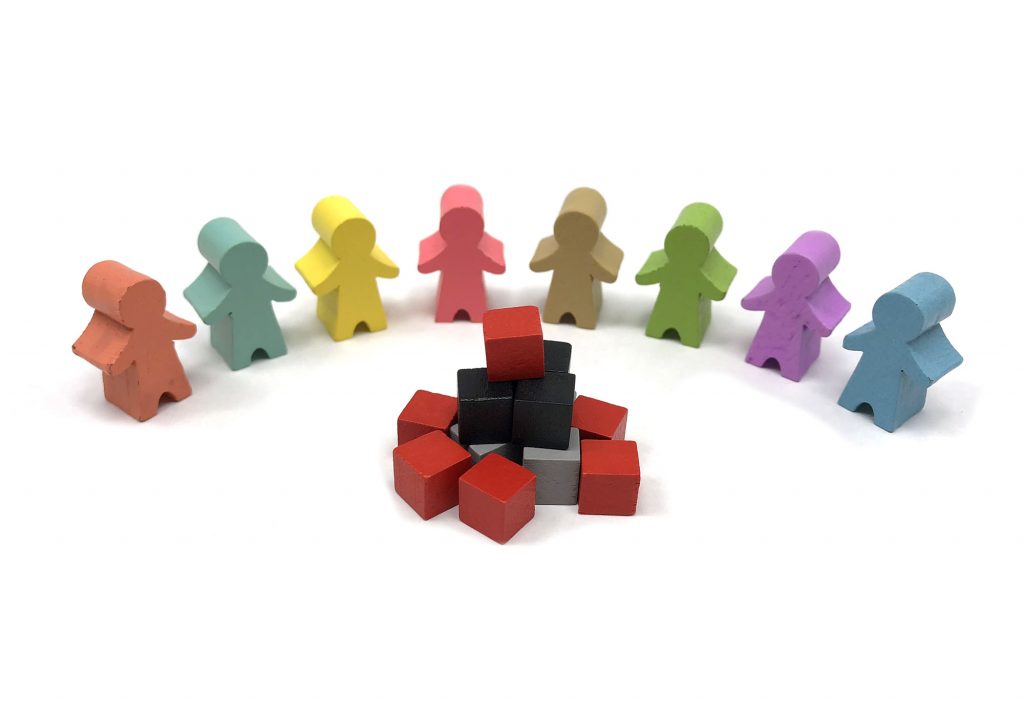 But perhaps one of the most visually appealing things about the game are the animal guides. Introduced in the base game as simply another piece, they expand their usefulness in the first expansion, Dawn of Humanity, by providing special abilities to the players. Plus the shapes and sizes of these pieces are so over the top that you can’t help but love them. I mean look at the size of that mammoth from the first expansion! And the second expansion, Seafarers, lets you play with a porcupine! 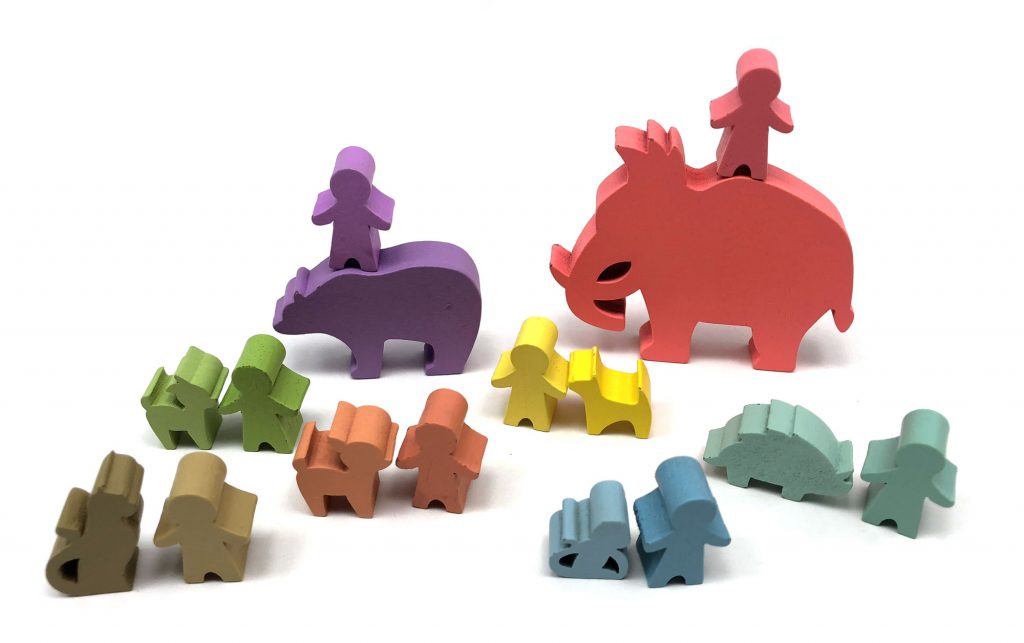 There’s a few minor issues with the game, namely that the translation into English needs some work. It took a few reads to make sure that we were playing the game correctly, but once you learn, the game speeds by smoothly.

Another thing to bear in mind is that this is a very lightweight game; in many ways reminiscent of Stone Age. Move a piece, roll the die, and collect some resources. It’s a great introduction to this sort of game for younger players, and one that parents will delight in with their kids. Let them pick their favorite color and/or animal guide and jump into the game! Shepherd Kit also did a great job building expansions into the system. Each expansion not only adds new tribes to pick from, but also increases complexity by adding new scoring options, and other interesting additions…that means that Paleolithic will grow along with your kids. 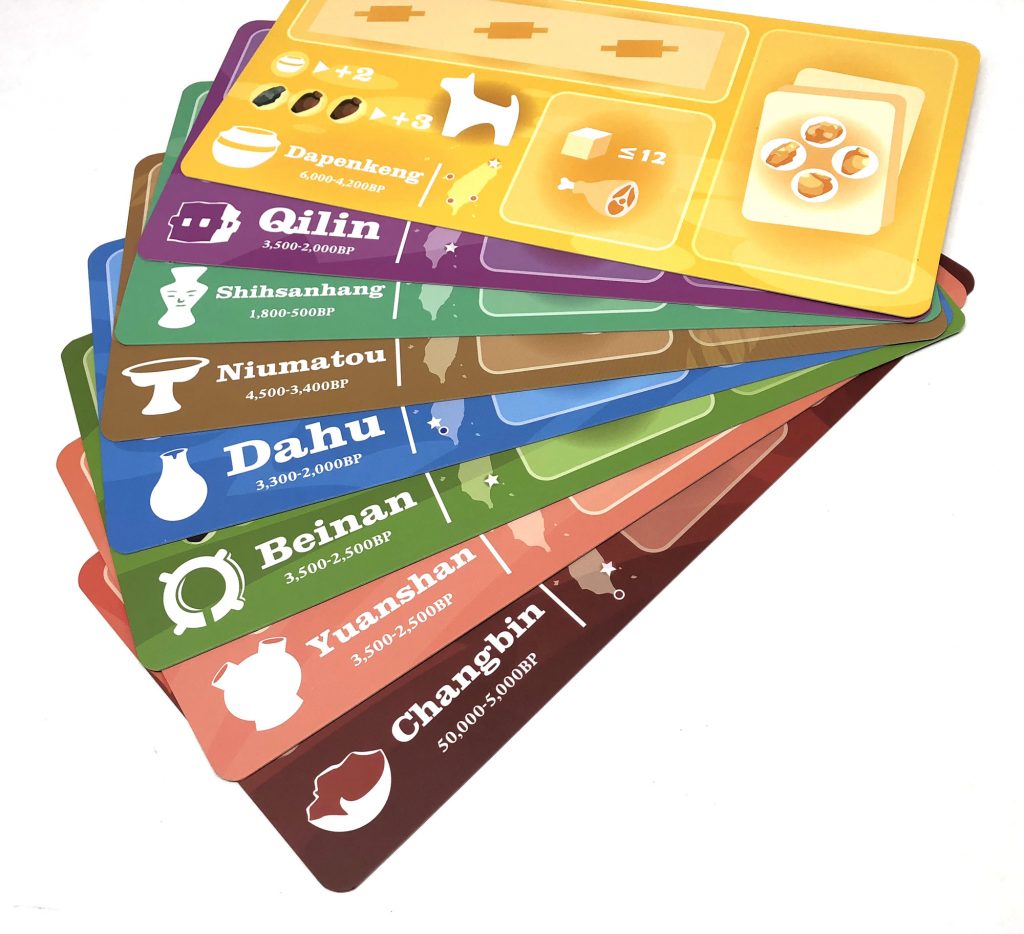 Paleolithic is a great addition to a family game collection and one that you should definitely check out if you get the chance!