I remember the sights, sounds, and smells of going to the circus. There was a youthful energy and excitement filling the room as acrobats balanced on top of elephants, stuntmen fired themselves out of cannons, and tigers prowled around the ring. Meeple Circus not only takes you to the circus, but it gives you your own ring to conduct a show. If you like playful, quirky dexterity games with just the right about of interesting decisions added in, then read on. Meeple Circus may be a game for you. 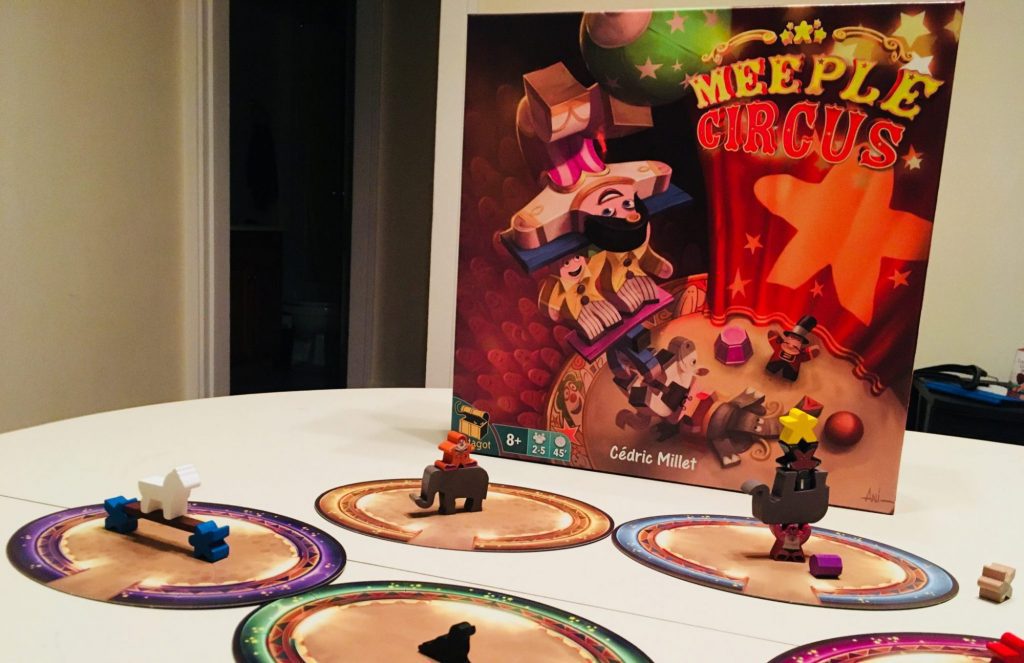 The goal of Meeple Circus is to generate applause by pulling off stunts that the audience wants to see. Each round begins with players drafting components to add to your circus. There are two types of tiles players will be drafting – circus acts and component tiles. These tiles will let players add elephants, new acrobats, and props to their circus. In order to aid in your decision making, each round there are four public demand cards available that provide you with opportunities to score applause. 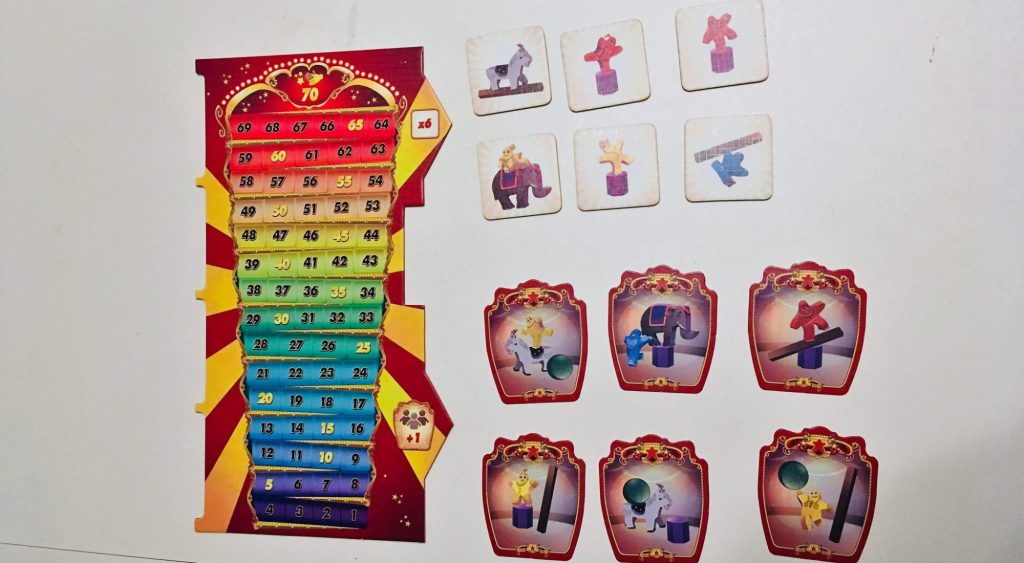 After the drafting is complete, then the magic really starts. Two minutes are put on the clock in the form of circus music (check out the music here) and players are forced to scramble to set up their circus in the most appealing way possible. At the end of those two minutes, players score points for what structures they’ve completed. Scoring is simple – you get points for the public demand cards you complete, additional points for your blue meeples which score one point if they’re on the ground (the beginner acrobats are afraid of heights), yellow meeples score one point if they’re off the ground (intermediate acrobats aren’t quite ready to be the star of the show), and red acrobats score points based on how high up they are (advanced acrobats are the star of the show). 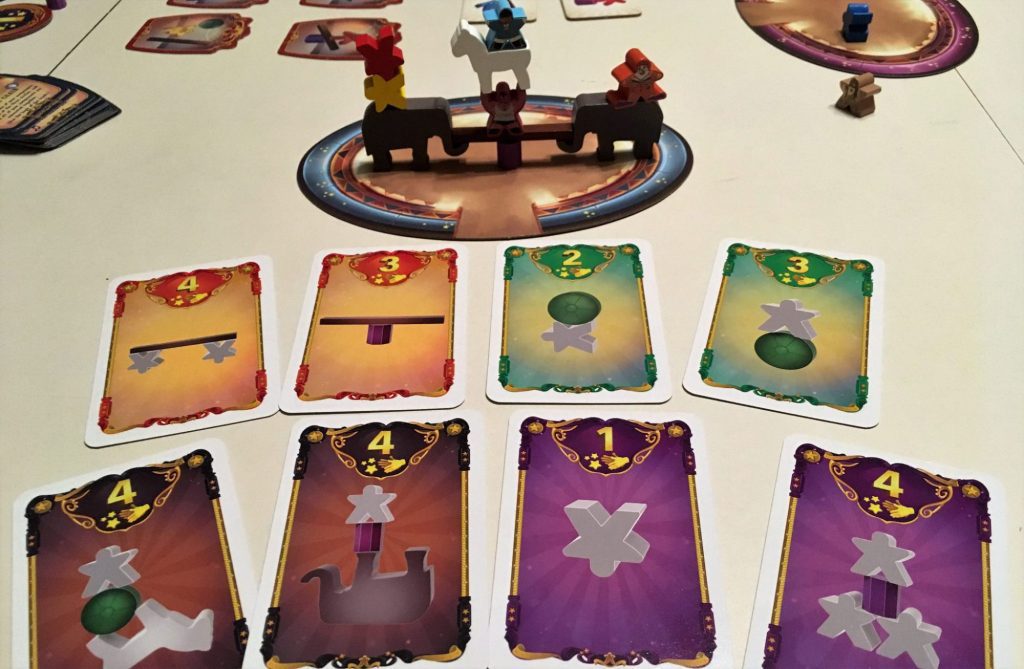 In the second round, the circus act tiles add additional scoring opportunities in the way of guest stars. This round may add a ringmaster who only likes to stand on his head, or a prowling tiger who your acrobats are afraid of, or maybe you’ll get the strong man who scores more points for pieces he balances on top of himself. Finally, in the third round players will be given challenges, such as sing along to the music, play with one hand, or stand up and say thank you each time the cymbals crash. In this final round, you’ll also be playing one at a time so that your opponents can judge your performance. 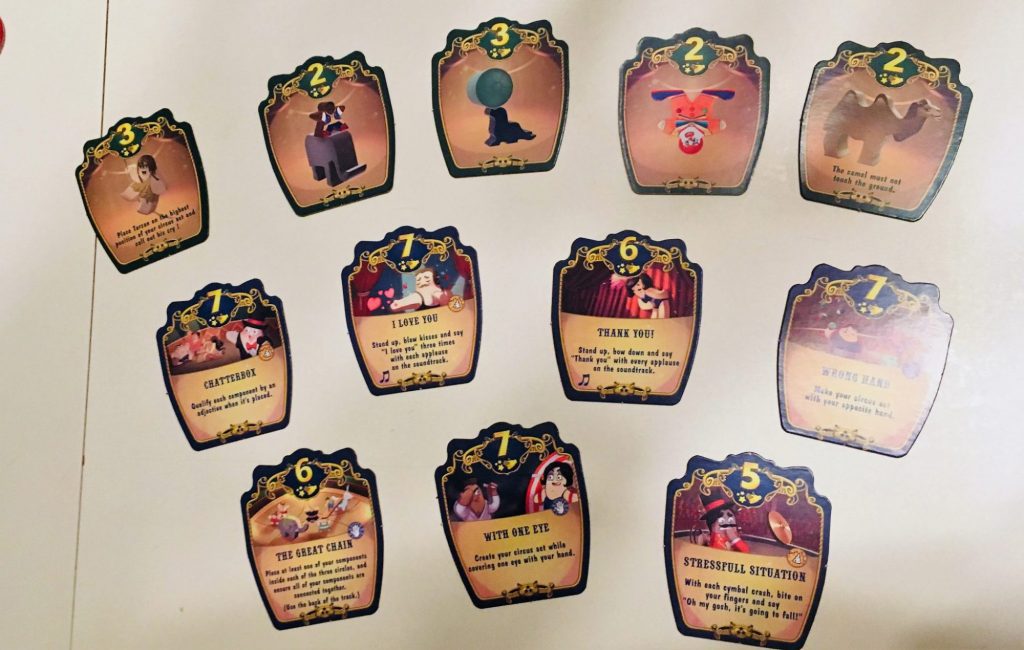 Meeple Circus is one of the best games I’ve played this year. The clever gameplay centered around building a circus combined with the joyful music creates an incredibly evocative experience. While the music counts down, the tension rises but it never rises to the point that anyone gets too frustrated because, at the end of the day, you’re stacking meeples. 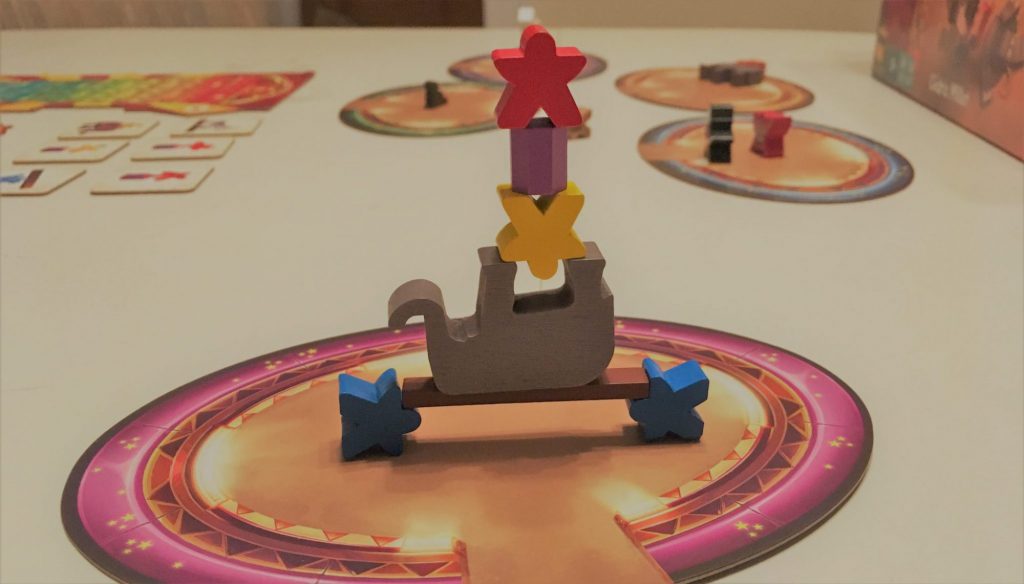 I have yet to play a game of Meeple Circus that didn’t devolve into a combination of the participants laughing together or admiring the structure someone else has built. My one complaint about the game comes down to accessibility. The primary colors of your meeples are red, blue, and yellow and seeing these colors is important. There is no distinction made in the pieces to identify them to someone who is colorblind. Making a small change to these colors would have made it more accessible to a larger group of people. 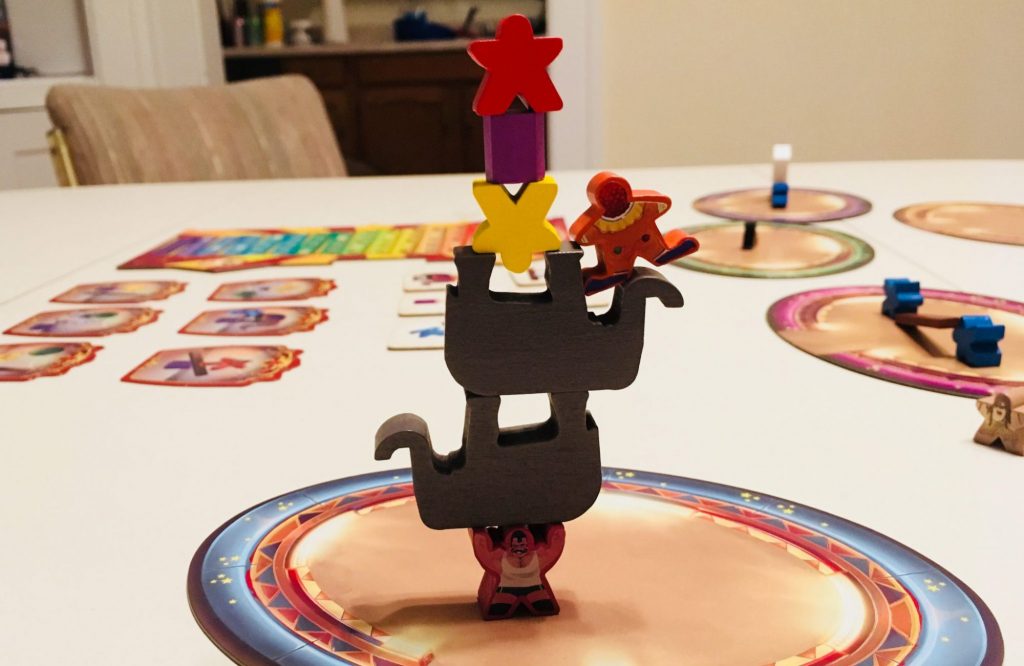 I love Meeple Circus. It’s the perfect “the rules don’t count and the points don’t really matter” game. There is a great combination of interesting decisions combined with pure, uninhibited fun. It is the kind of game that I will hunt down every last mini expansion they make and that I’ll be happy to play with most any group. To conclude this review, I’ll leave you with this clip of my dad playing while his structure falls to pieces. Notice the smile on his face even as he watches his hard work fall to the ground.

Builder's Satisfaction   Diversity in gaming   Women in board games