In the game of Fences players take on the roles of farmers working to grow their farms as rapidly and efficiently as possible. This is accomplished via the placement of tiles, and as these tiles are laid out into a central  playing area, the players will have the opportunity to add barns into the fields. These fields will eventually become enclosed by fences which will trigger scoring.

If a player’s barn is present in an enclosed area, it will score points for the animals in that field. The player that caused the field to become completely enclosed may also score points for the field if the conditions on their farmer card are met… even if they don’t have a barn in the field. Then any barns involved in the scoring are returned to their respective players and the next player takes their turn. Once the final tile has been placed and any scoring performed, the player with the highest score wins the game. 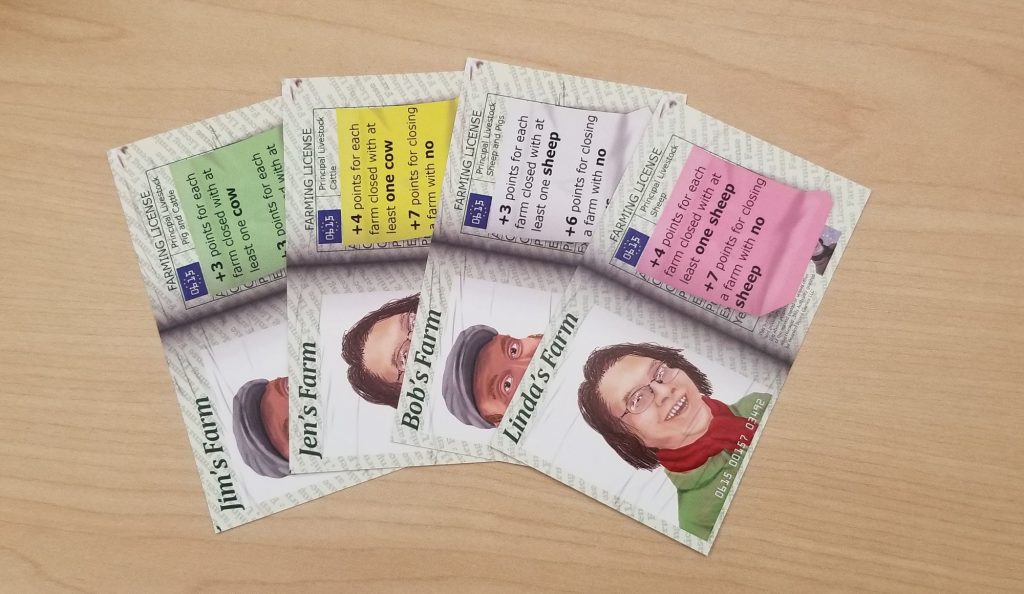 If you’re just interested in finding out what I think about Fences, then feel free to skip ahead to the Thoughts section. However, if you’d like a more in-depth look at how the game is played, then read on.

The setup for Fences is fairly straightforward. Each player chooses a color and takes the barns matching that color into their possession. One of these barns is placed onto the starting space of the score track on the inside of the box bottom. Each player is also dealt a farmer card which is kept face up in front of them. Each farmer card is unique with different scoring agendas which will help guide the players in the decisions as they play. 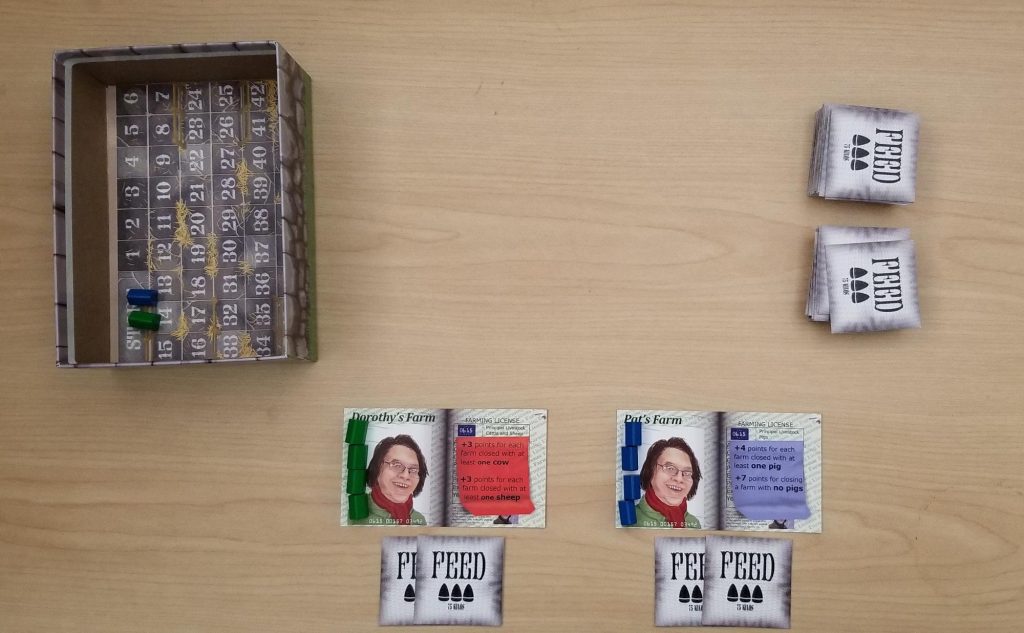 Next, the tiles are shuffled and placed face down nearby and each player is dealt two tiles from each of these stacks which they will keep hidden from the other players. A starting player is selected and you are ready to begin playing. 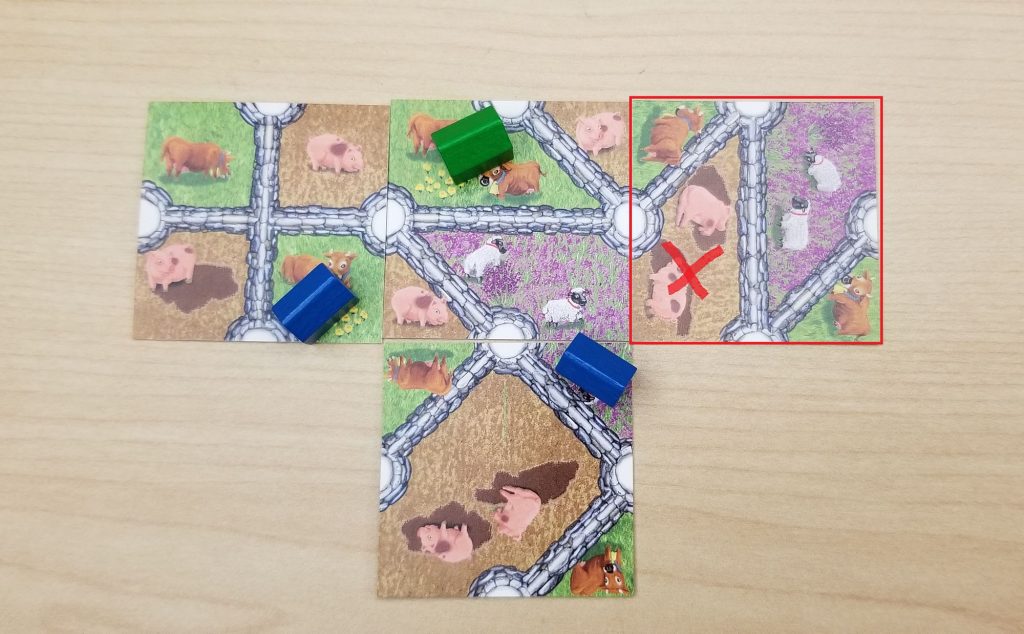 This player may not place their barn in the area with a red X since that area already has a barn in it.

If this tile placement causes a field to become enclosed by fences, then that field is scored. Finally, the player draws a replacement tile from the stack and the next player takes their turn.

When a field is enclosed, if it contains only a single barn, then the owner of that barn earns one point for each animal present in the field unless all of those animals are of the same type (in which case, they’re worth two points each). The player that causes a field to be completed may also score points from their farmer card regardless of whether or not they had any barns in the field. 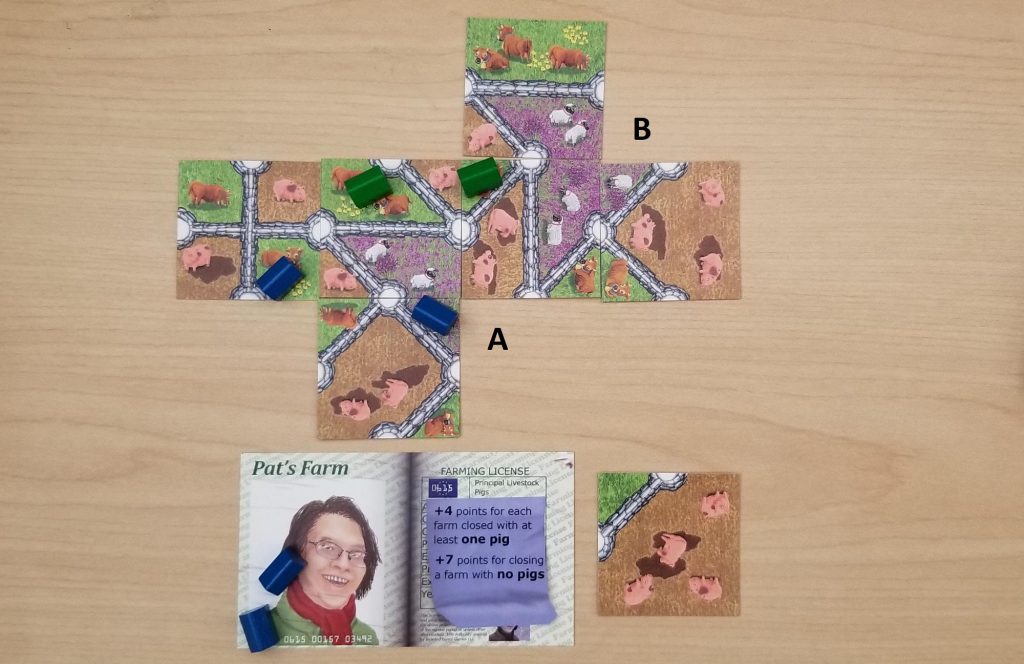 In the example above, if the blue player were to place their tile into position A, they would score 8 points for the field (2 sheep + 2 pigs + 4 points from their farmer card). If they placed the tile into position B instead, along with one of their remaining barns, they would score 17 points (10 points for 5 sheep since they are all of the same animal type + 7 points from their farmer card).

Before I delve too much into the game play, I’d like to take a moment to comment on the look and feel of the game. The printed components (i.e. – pretty much all of them) have a distinctly weird quality of being both high quality and very flimsy at the same time. For instance, the tiles have a nice heft to them, but they’re very thin and difficult to shuffle. I’m going to chalk this up to this being a prototype and I certainly expect the final quality will be much better. The artwork makes me feel weird also; while I find it to be serviceable, some of it is strangely off putting. The box art and the animals on the tiles look great, but the farmers on those farmer cards just look strange. It’s almost as if there were two different artists. For all I know there could have been, but I can’t be sure since neither the designer nor the artist(s) are credited anywhere in the printed material or on the box itself.

This talk of printed material brings me to my last comment about the components. The rule book looks great and it’s evident that a lot of time was put into getting it right. However, that same attention to detail wasn’t paid to the text on the box. For instance, the box implores me to claim my land, “sheppard” my herds, and build my fences. I hope that they have an editor look over things before hitting the “publish” button at the end of this campaign. But enough about the game pieces. Let’s talk about how it actually plays.

It’s almost impossible to play a game like Fences where you’re laying down tiles, placing control markers onto those tiles, and then completing the features on those tiles later on in order to score points without comparing it to Carcassonne (assuming you’ve played Carcassonne). So, the question becomes, what makes Fences special? How is it different and are those differences enough to set it apart?

For starters, Fences is much more streamlined than Carcassonne. Carcassonne presents you with multiple options at any given time (especially when you begin adding in expansions) by providing you with different features that score points in different ways and then forcing you to choose between which of those you want to invest in. Fences removes a lot of that complication. You’re only concerned with one thing here: enclosing fields and scoring as many points as you can for doing so. This just makes it a much easier and much more approachable game.

Secondly, the farmer cards introduce the concept of variable player powers which give the players the ability to score for fields they normally wouldn’t be able to score for. In a game like Carcassonne, the only way that you could complete a feature that belonged to someone else and still score for it would be by either sneaking onto the feature via a connecting tile or through the use of a game expansion. In Fences, being able to score for someone else’s fields right out of the box presents the player with interesting decisions that normally wouldn’t exist. Is it worth it to cut off an opponent’s progress in a field to score a few more points even though it’s also helping them? Or would it benefit you more to wait a little while longer in order to increase your own benefit derived from doing so? And true to the nature of variable player powers in any game, these different play styles provide the game with a great degree of replayability.

So, while similar to Carcassonne, Fences is just different enough that it manages to stand as its own game. And it’s decently fun. In the last game that I played with my wife, she was working on constructing a giant field that was going to net her a sizable amount of points. Seeing this, I managed to scoot in underneath it and drop in a tile that made it almost impossible for her to complete it. Not only was I denying her those points, but I was also tying up one of her barns to boot. The feeling of dread that she would manage to draw the one tile she desperately needed was very real. It took awhile, but she finally managed to draw it. While Fences didn’t blow us away, we both enjoyed ourselves. Overall, it was a positive experience.

In fact, there aren’t many negative aspects to the game. Aside from my gripes about the components, there were a couple of other things that gave me pause. First, the score track in the bottom of the box is difficult to see and manipulate. Because the sides of the box are so high, if you’re looking at the score track from an angle, it is completely obscured. In order to see it, you have to practically stand directly over it looking straight down. These high walls also make moving the houses around somewhat of a chore. It is an odd design choice and I think I would have preferred it if the score track had been printed on its own separate card or if it had been printed on the bottom of the box instead so that the box could have just been flipped upside down.

There also needs to be some way to track your score once it’s moved beyond fifty (the highest the score track goes). At ten to thirty points a pop, the fifty mark is hit and exceeded almost immediately. Also, the rule book doesn’t have any provision for what happens should there be a tie in scoring. Even though this didn’t come up in any of the games that I played, I could see it potentially causing some issue should it occur. 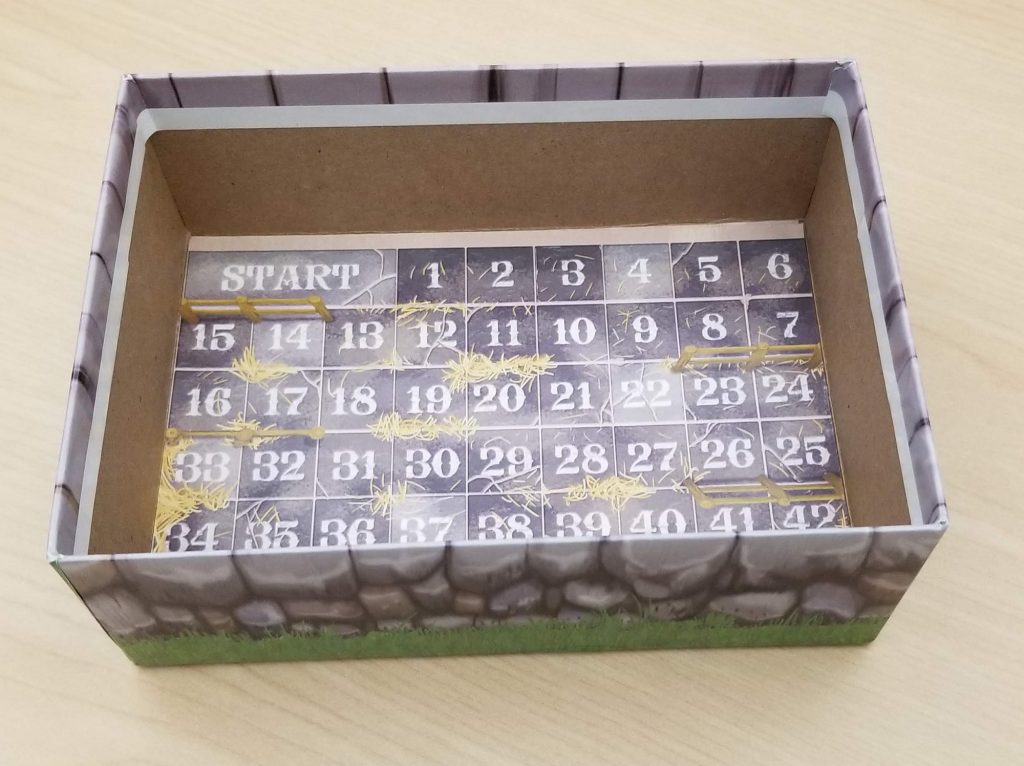 Even though it doesn’t possess the same complexity as Carcassonne, Fences does have just enough depth to make it interesting. If you’re looking for a quick tile laying game with some bite to it or if you’re playing with people that get all cross eyed when they’re trying to wrap their heads around Carcassonne, then Fences might be just the game you’re looking for. Fences is a pleasant game that is not only easy to teach, but also plays fairly quickly, too. If it sounds like something that would interest you, then I recommend taking a look at the Kickstarter for it that’s going on right now.