As the wind fills your sails, and the mast groans, you see the shores of what can only be the fabled lost island. The gods know how tireless your search has been, how long you’ve been waiting for a glimpse of these shores, how much you’ve sacrificed. Today…today is the day you gain the favor of the god Dokmus for your people.

But as your ship races across the waves your lookout cries out in alarm; your enemies have arrived as well. How can this be? Not when you’re so close! You bellow for your crew to raise every scrap of sail and break out the oars. It seems as if the race has only begun… 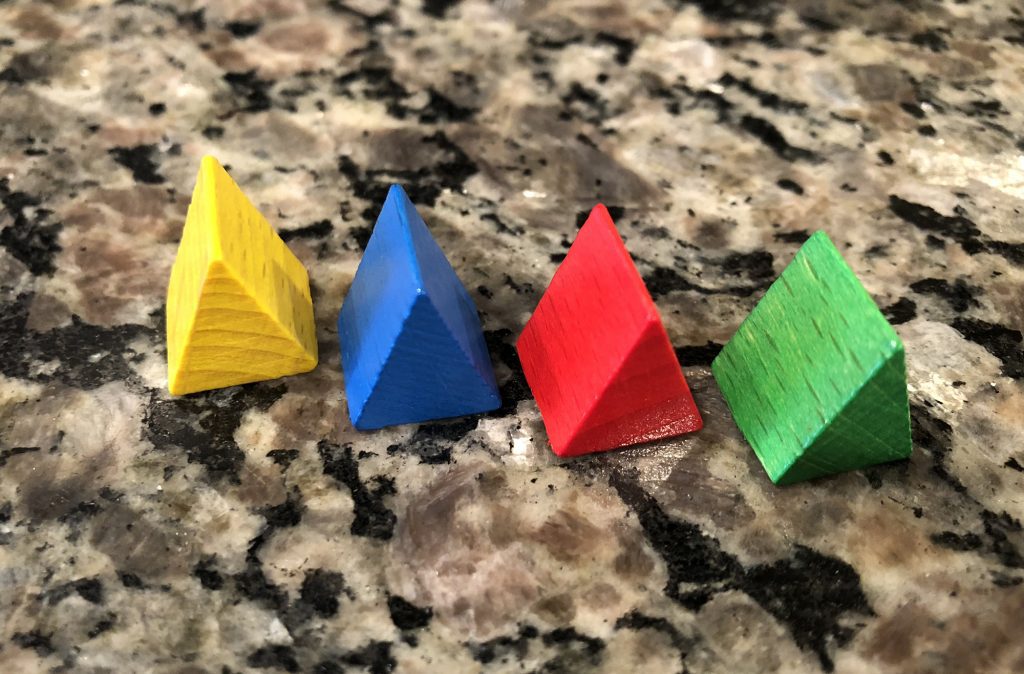 In Dokmus, you must guide your tribe across an ever changing island to gain the favor of your god. With only 8 turns in the entire game you must gather every glimmer of cleverness at your disposal and disperse your tribe members throughout the island before your opponents. Enlist the aid of the island’s guardians to claim initiative, protect your people from the elements, and manipulate the very island itself. Do you have the determination to sacrifice your own tribe members in your single minded goal? If you score the most points at the end of the game you’ll win everlasting glory for your tribe.

The game of Dokmus is played using a set of 5 inch square map tiles. In a 3-4 player game eight tiles will be arranged in a square, with a single empty space in the middle. In a 2 player game five tiles are arranged in two rows with the empty space in the middle of the top row. Each player takes one piece of their color and places it on the outer edge of a corner map tile, in an empty field or forest. 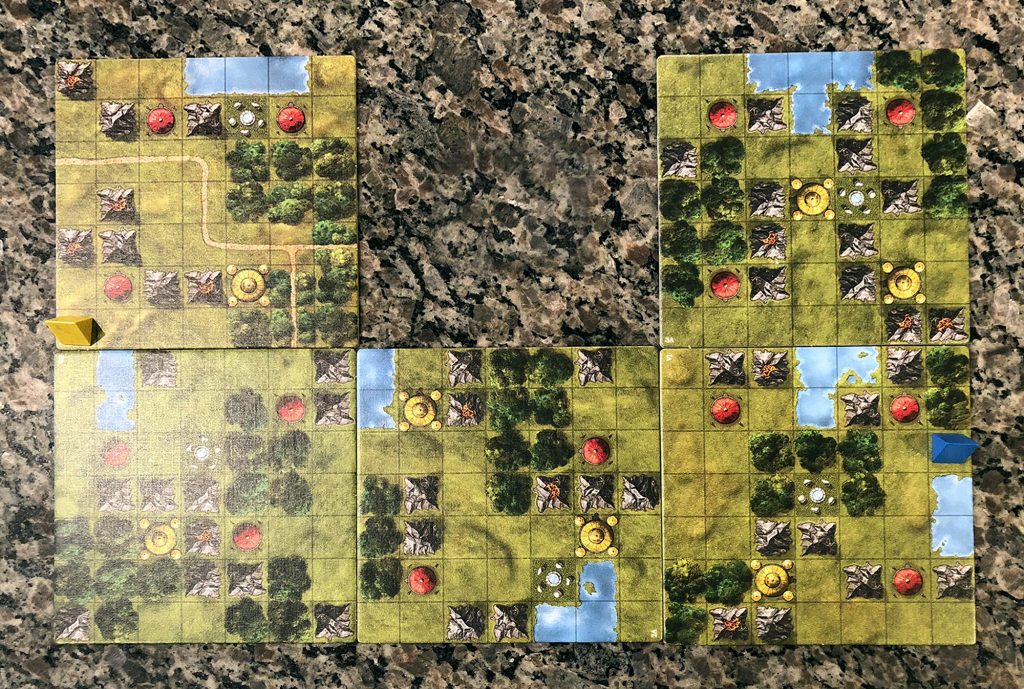 Dokmus, set up for a two player game.

At the beginning of each round players will select guardian tiles which offer powerful benefits but also dictate turn order. The player who selects the lowest numbered tile goes first, and play proceeds to the player with the next highest tile. Each player must place 3 of their tribe members on the board each round and can optionally use their guardian’s power. They may take these 4 actions in any order they choose. 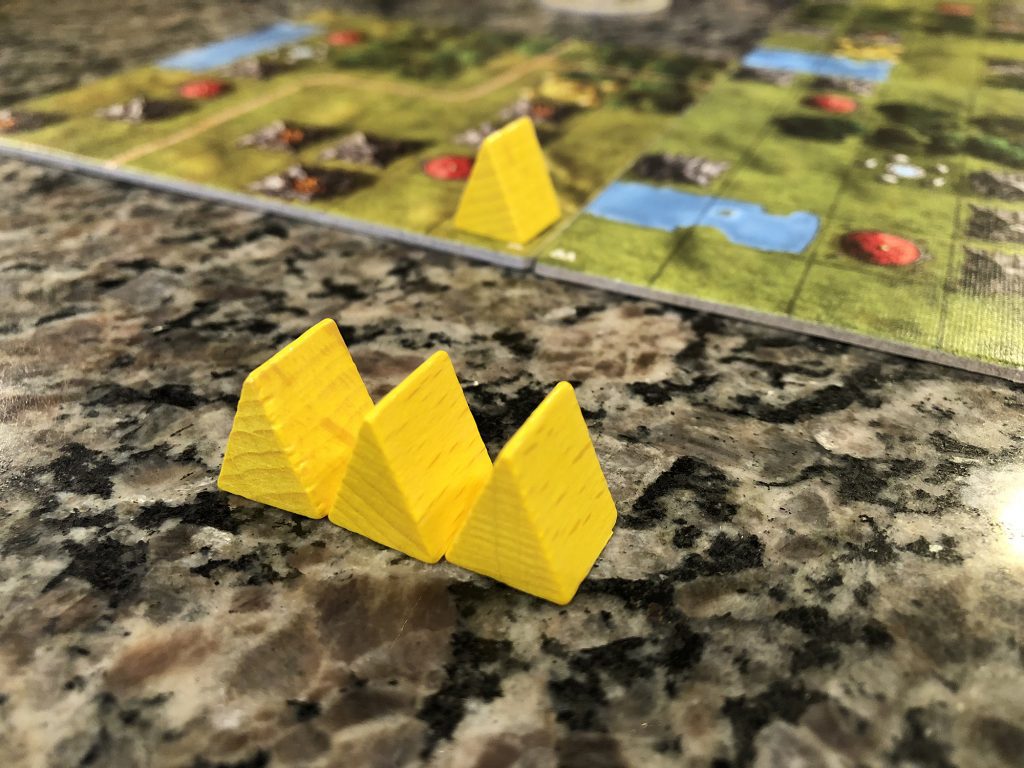 Yellow gearing up for a turn.

Since the guardian abilities are so central to the game, let’s take a quick moment to review their abilities. 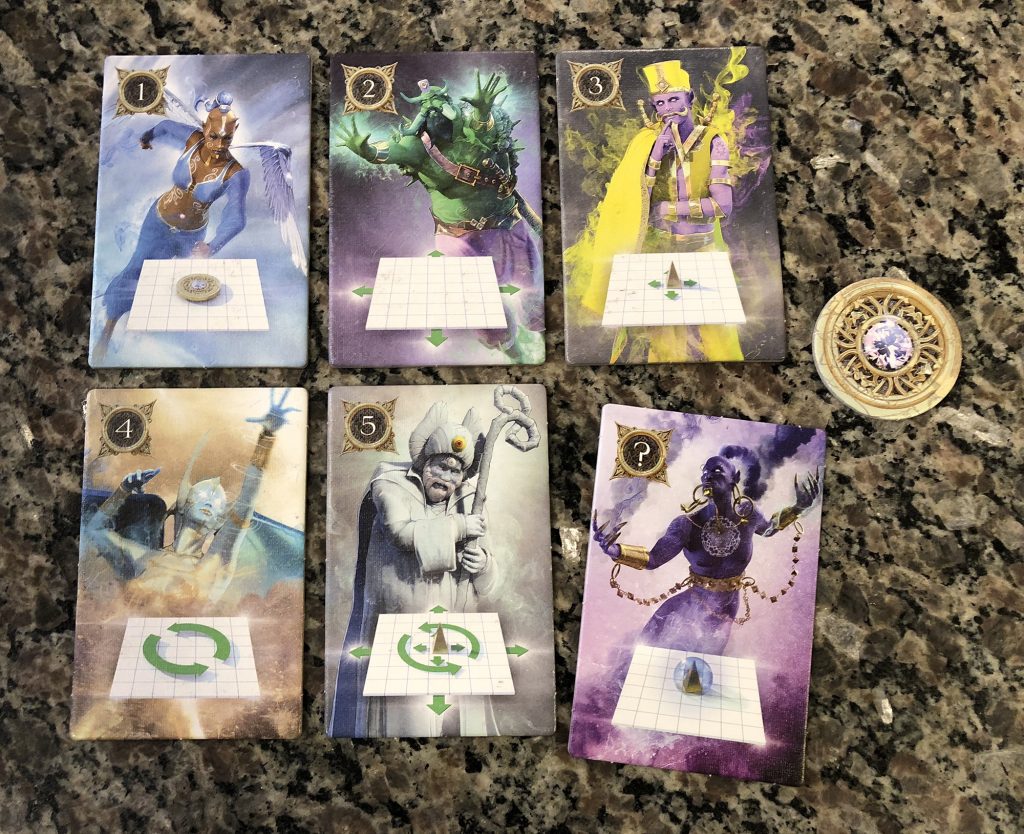 Guardian 1 – Allows the player to claim the first player spot. The impact of going first cannot be understated. Because other players are not able to directly affect your existing pieces being able to place, move, or rotate, can sometimes mean the difference between winning and losing.

Guardian 2 – Allows the player to slide one island tile so that it occupies the empty position in the grid. This helps players gain access to parts of the island which were previously inaccessible.

Guardian 3 – Allows a player to move one of their tokens to an adjacent space. This can aid in bypassing obstacles which might otherwise result in the loss of a piece.

Guardian 4 – Allows a player to rotate an island tile in place. This helps players gain access to parts of the island which were previously inaccessible.

Guardian 5 – Allows a player to take any action from Guardians 2, 3, or 4. This is a flexible power, but requires the player to go last.

Guardian ? – This is a new guardian added to the game in the Return of Erefel expansion. This guardian allows a player to protect a single piece from being removed from the game (from either forest or water spaces). Turn order for the player selecting this tile is determined by the number of the highest remaining unselected guardian tile. Assuming guardians 2 and 4 were unpicked, this tile would be a turn order of 4.

On their turn players will place 3 of their tribe markers. These pieces must be placed adjacent to a previously placed marker. Gaining access to the guardian powers which allow movement or rotation of the island will allow players to spread out from more than one area which will increase your options. 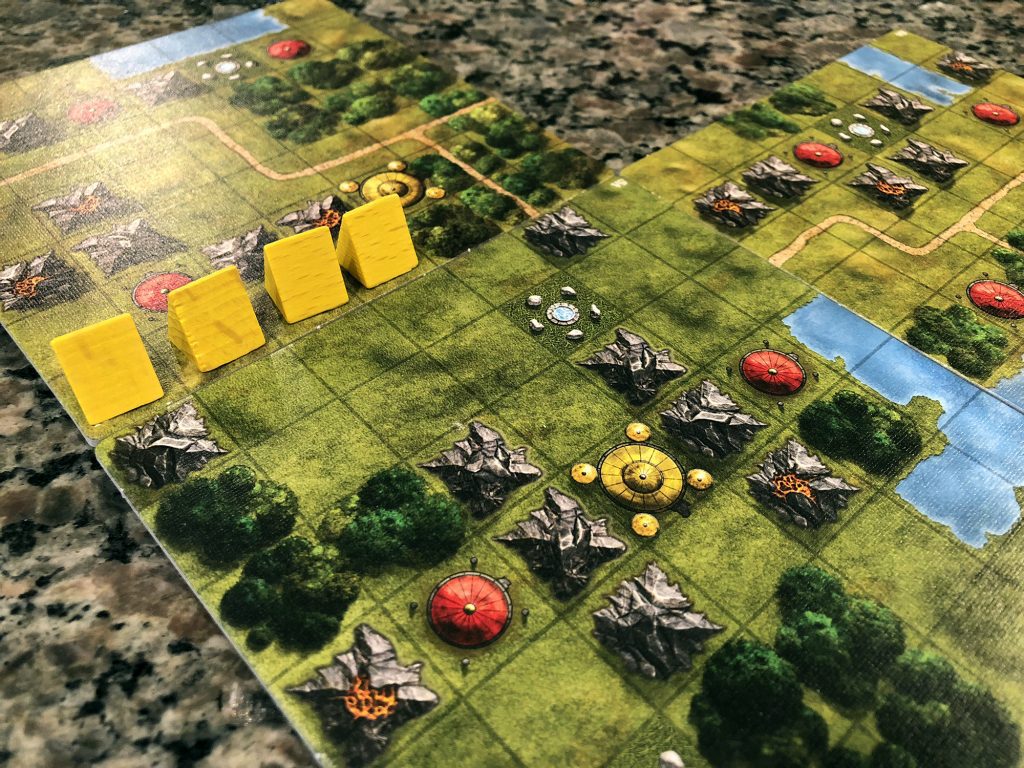 There are 8 different spaces on the board: meadow, mountain, volcano, red and yellow temples, forest, water, and ruins. Except for the meadow, each space has its own restrictions about placement. Learning what each space does, and how it can be used is important. For example, if your turn ends and you have a token on a forest space with no other token near it, you must remove it from the board. Players must discard one token to cross waterways, but may then move their next token into any space which touches the waterway. 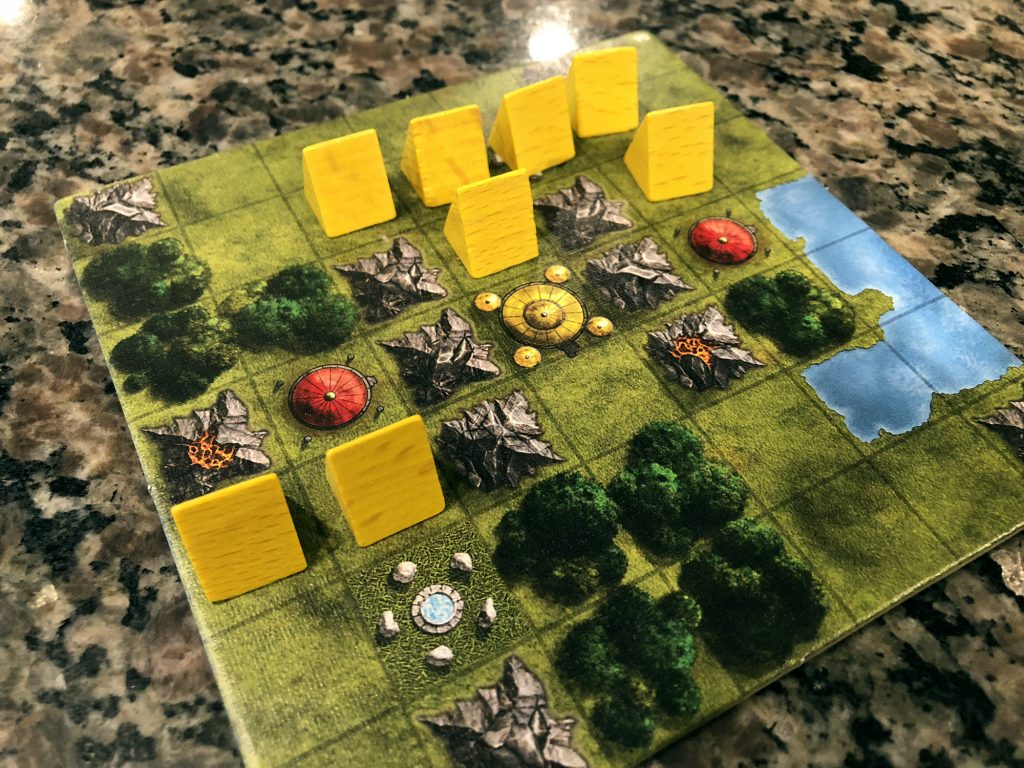 Ruins allow players to execute one additional guardian power (2, 3, or 4) at the cost of permanently locking in that token to a ruin. And finally volcanos force you to sacrifice that token and place it in the empty area on the right of the scoreboard. 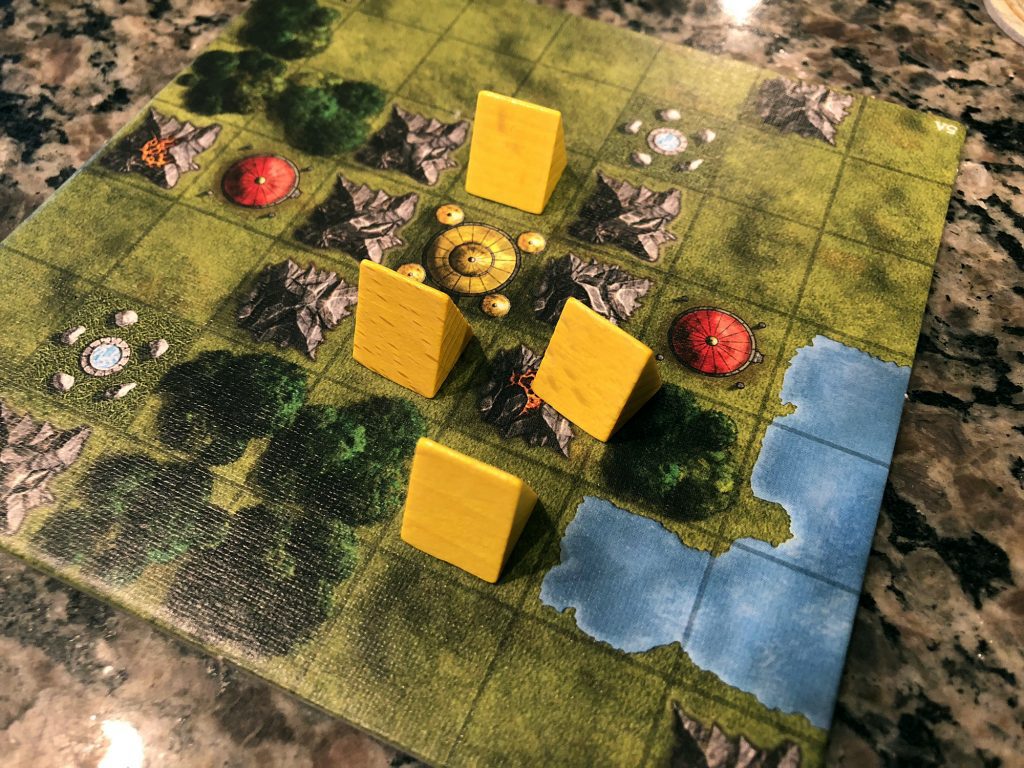 At the end of the game whichever player has the most sacrificed pawns will receive additional point bonus. 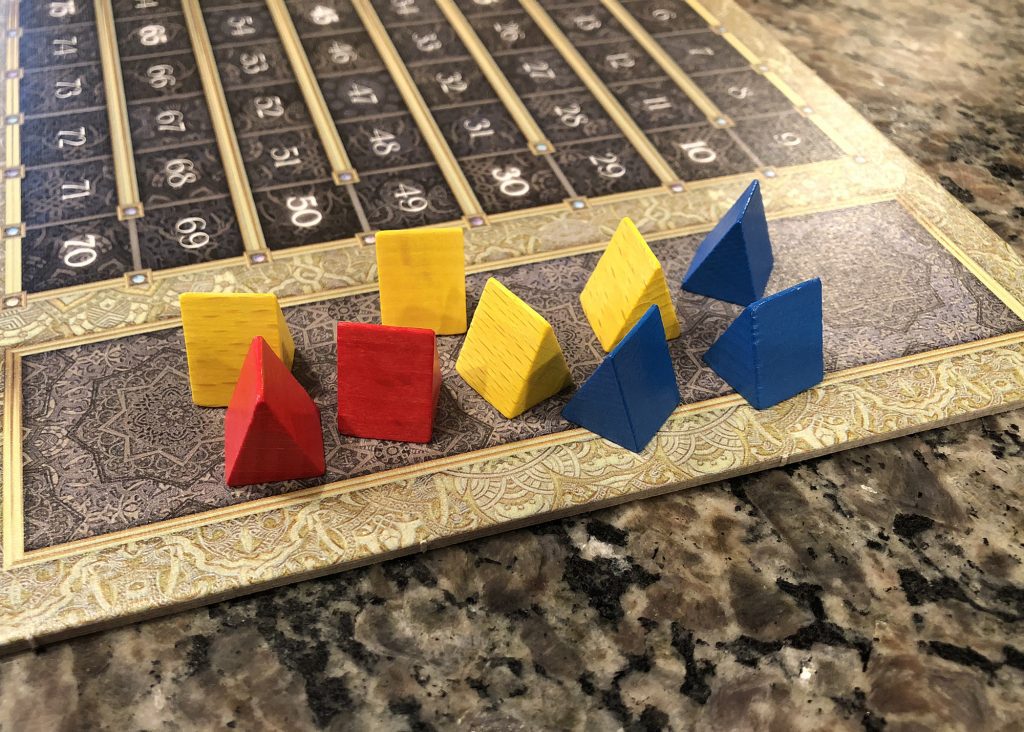 Add up all the points and the player with the highest score is the winner. 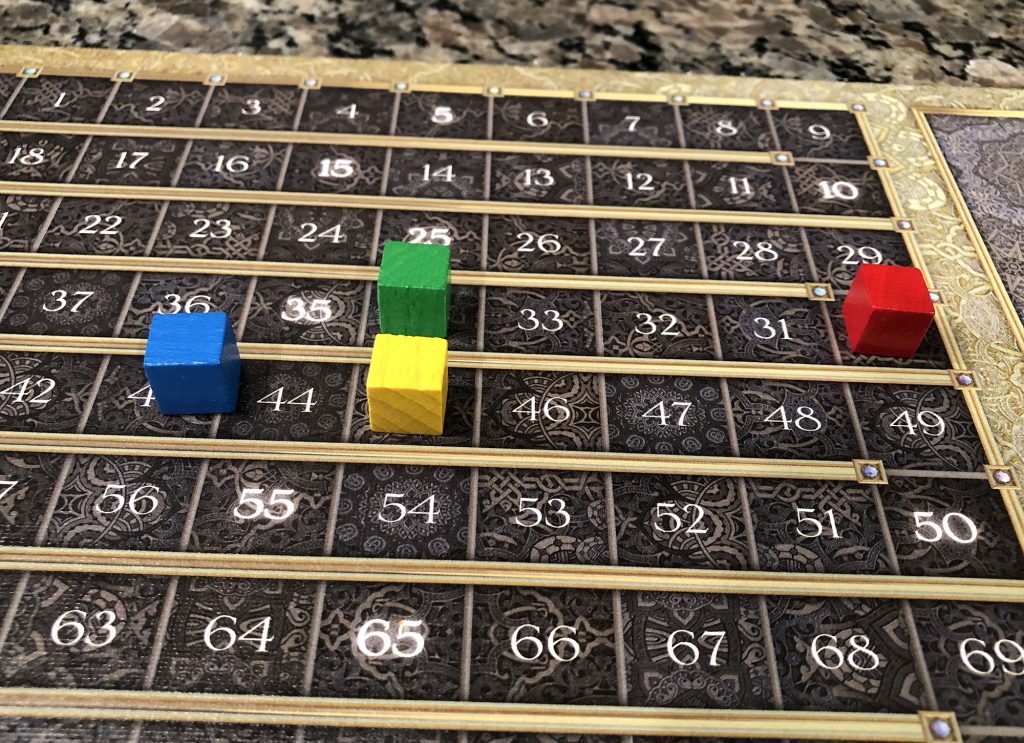 Dokmus was originally published by the Finnish company Lautapelit.fi whose other games include Nations, Eclipse, and the recent cycling hit Flamme Rouge. Dokmus was picked up for US distribution by Renegade Games who have also brought over the brand new expansion Return of Erefel. 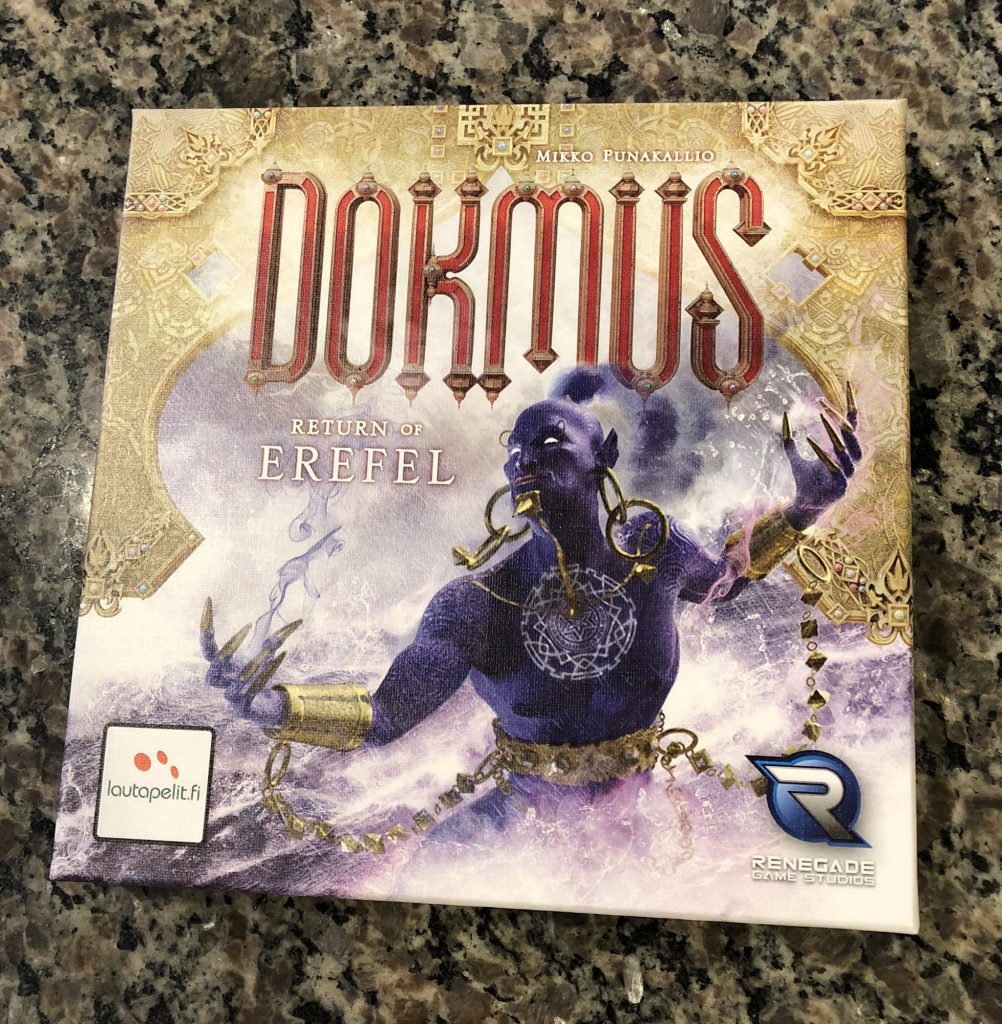 This expansion adds new island tiles (for added variety), a new guardian (detailed above), and 2 double side scenario tiles. These scenario tiles drop into the empty space in the island grid and change the game in meaningful ways. One scenario causes the water spaces on any island tile adjacent to the scenario tile to freeze over allowing players to freely move over the waterway. The other three scenario tiles offer similar game changing possibilities. 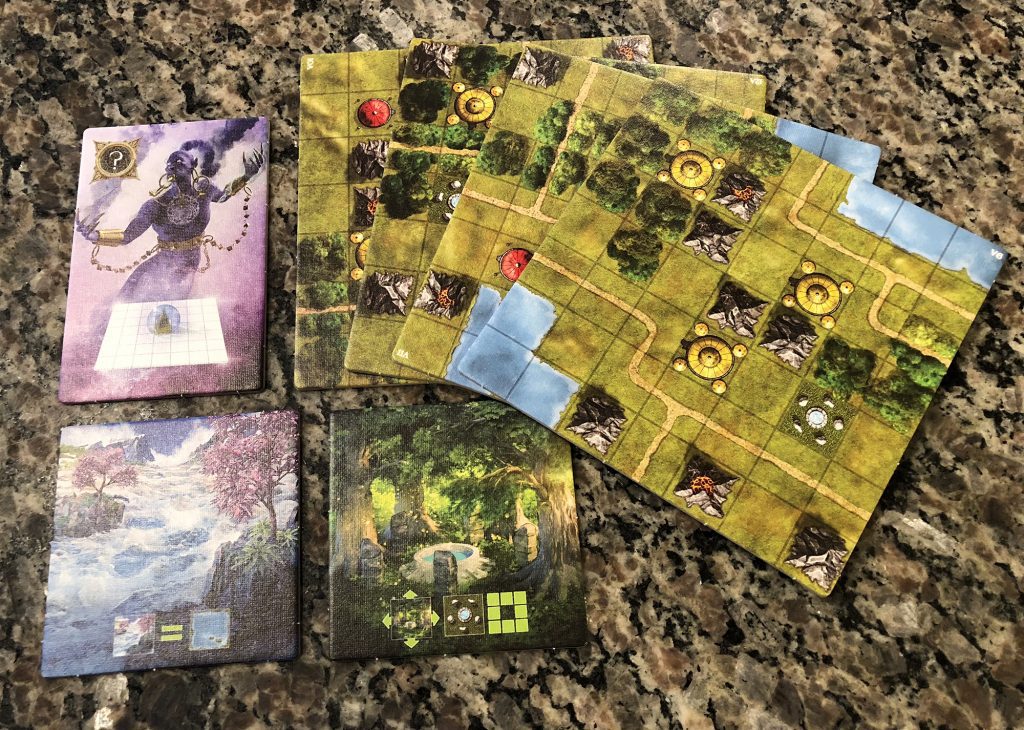 While I haven’t played with the expansion content yet, it’s exactly what I feel an expansion should be: it adds more variety without introducing lots of new features. The game is great as it was, the expansion just means you can play more regularly without getting bored.

I’ll let it slip early but I love this game. I picked it up near the end of last year and I’ve enjoyed every play so far. The art is sparse, but extremely detailed. The guardian tiles are beautifully illustrated, with rich colors that make me wish that those tiles were used in a more prominent way. The map tiles are clear, well illustrated, and easy to tell what apart, even from across the table. All of the components are of really high quality, with large, thick cardboard and wooden tribe markers.

Dokmus is the sort of game that rewards players who can think spatially. Because the island tiles are constantly being moved or rotated, players must be able to visualize which spaces will be adjacent to their pieces, both before and after a move.

Clever use of the move and rotate guardian abilities can extend your reach and help you access remote parts of the island for valuable end game scoring. Monitoring your opponents’ moves will offer insight into their goals and allow you to adjust your plays accordingly.

I feel that Dokmus is sort of the next step in a ladder containing polyomino games like Barenpark or NMBR 9. While Dokmus doesn’t have tile placement, it uses tiles and forces players to continually adjust their mental models to account for a new configuration.

If you like tactical games which require a good grasp of spatial awareness, then Dokmus might just be a hit in your gaming group. I definitely recommend Dokmus as a game to watch out for.