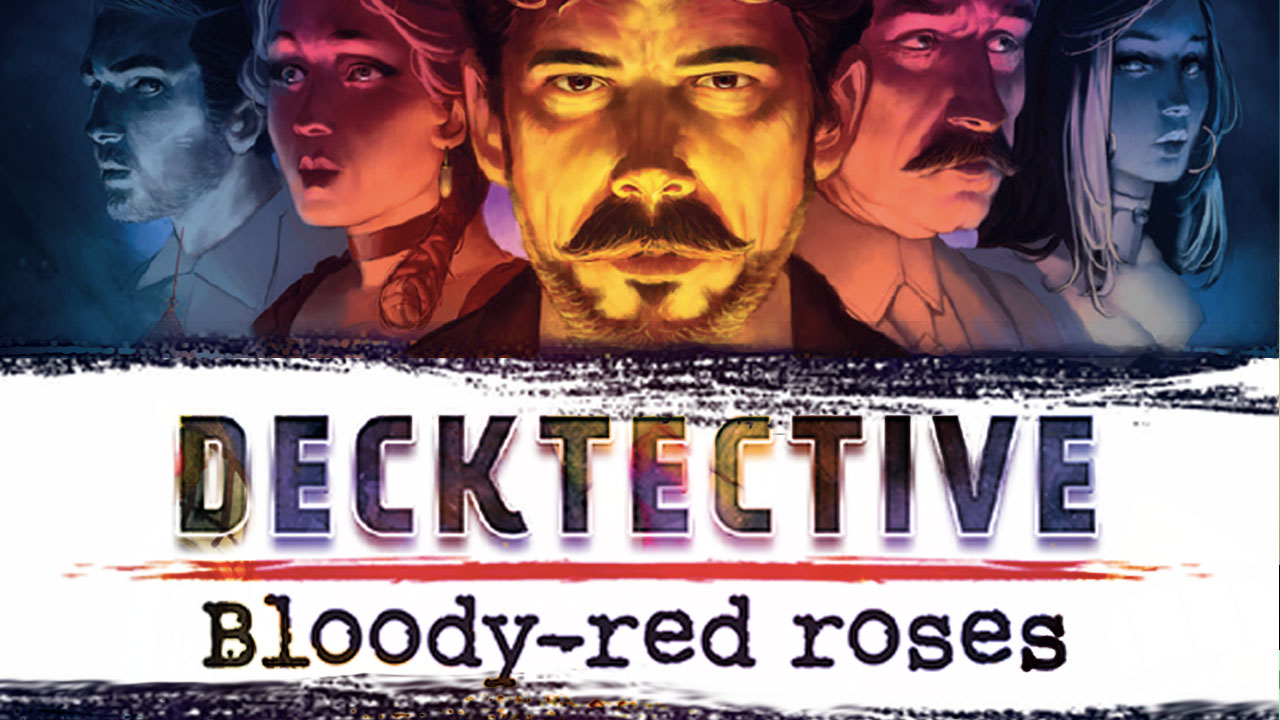 One morning Count Tudor is found dead in a rose bush. Do you have what it takes to solve the mystery surrounding his death? Read our spoiler-free review of Decktective: Bloody-Red Roses to find out.

Decktective, from the same publisher as Deckscape — in case you didn’t guess by the name — is a cooperative mystery-solving game for 1 to 6 players detectives. Decktective can only be played through once, but there is no component destruction in the game so it can be passed on to other gamers once you’re finished with it. Similar to Deckscape, Decktective also uses just a deck of cards to provide players with information to help them solve the case. A game will last about 60 minutes and at the end players are asked a series of questions about the case. For each question answered correctly, players score points — and the goal is to score the most points.

Decktective: Bloody-Red Roses is the first standalone game in the Decktective series. The case begins with the visiting Duke of York discovering the lifeless body of Count Ferdinand Tudor in a bush of bloody roses; it’s up to the players to go through all the evidence and determine whether his death was an accident or a murder.

How to Play Decktective: Bloody-Red Roses

Next, players secretly draw 1 card at a time in turn order until everyone has a certain number of cards in their hand depending on the player count (5/6 players get 1 card each, 2/3/4 players get 3, and a single player gets 5 cards). It’s important to draw cards one at a time because each card in Decktective’s deck is numbered sequentially and the order of these cards must remain unaltered.

Since this is a cooperative game, you might have guessed that there are some rules when it comes to communicating about the cards in your hand. Players can neither show nor discuss the information on their cards, nor can they take any notes, but they are allowed to read the card’s title to the other players. These rules are important because a large part of Decktective: Bloody-Red Roses is deciding which cards to reveal — for all other players to read and discuss — and which cards to toss, effectively removing them from the game (and your memory).

Each card is numbered from 1 to 10 and to play a card from your hand, its value must equal or be less than the number of cards in the archive.

Playings cards faceup to the table means that you have determined it contains useful information that you think the other players should know too. Of course, there are cards in the game that are less helpful — perhaps they lead players down the wrong path — so you’ll want to discard these. The kicker here is that you can’t discuss any information from the card you discarded until the end of the investigation.

Spoiler alert: Click here to learn more about the cards with a twist in Decktective: Bloody-Red Roses.

At some point in the drawing, playing, and discarding of cards, players will stumble upon the card pictured below: 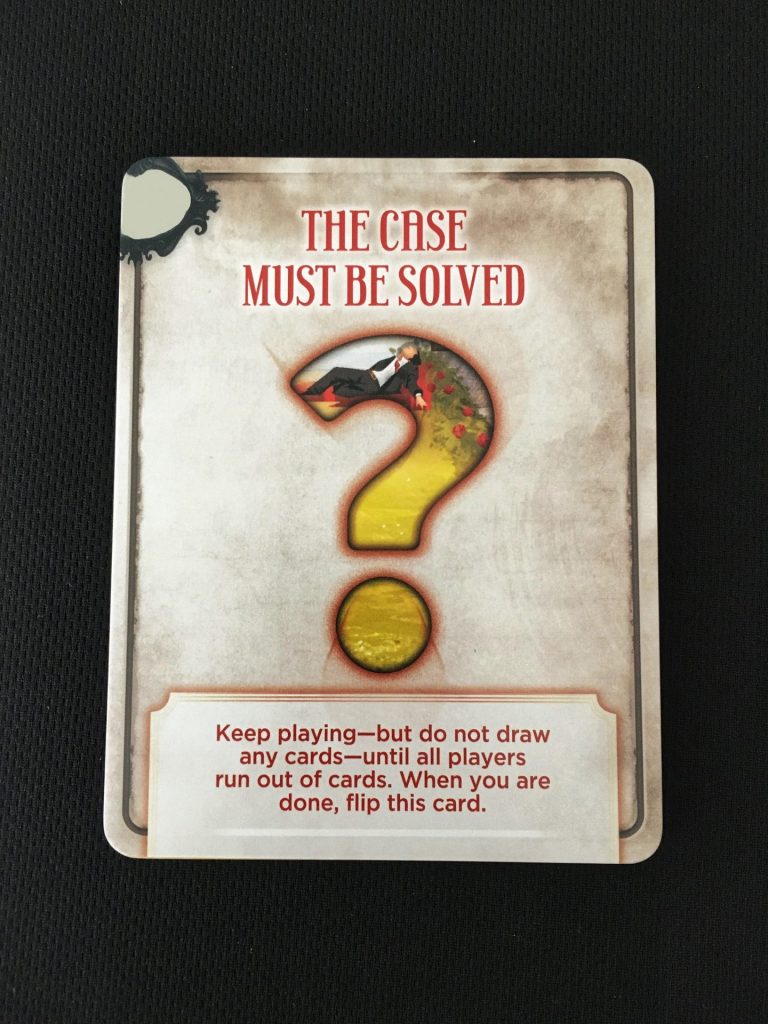 Players continue to take one of the two options on their turn, but don’t refill their hand; when everyone runs out of cards, players move onto solving the case.

Now, players are allowed to freely discuss their theories about the case and any evidence including any cards that were archived — assuming you remember what was on them since you’re still not allowed to reveal or read them.

Once players feel ready, they proceed to solving the case by answering questions and using the included clips to indicate their answer. Apparently the designers were so worried about all the cheaters out there that they felt the need to include a fool-proof system in Decktective: Bloody-Red Roses. (As an aside, I really like these little clips; it might feel silly, but there is something so exciting about flipping over the card to see the clip you placed point to the right answer.)

The back of every question card not only has the answer, but also an explanation and the cards which would have led players to come about the answer. This is great. There is nothing worse than not knowing how you might have possibly solved something…well I guess there is one thing (*cough* a global pandemic).

Disclaimer: Speaking of, thanks to the COVID-19 pandemic I had to play Decktective: Bloody-Red Roses solo. While I don’t think this changed my opinion of the game, it does mean that I can’t offer as much insight on the multiplayer experience as I normally like to.

Deckscape does something cool: it takes an escape room experience and distills it down into a deck of cards. Is it infallible? No, but it works often enough. Decktective: Bloody-Red Roses does the same thing, but offers a mystery-solving experience instead. Does it work? The answer is an emphatic…sort of.

Decktective seeks to give players a relatively quick-playing, immersive, cooperative experience and in that it mostly succeeds. The 3-D scene, while so simple, creates an interesting thematic element for the game that transports players to the scene of the Count’s death. It’s not necessary — the cards could have easily been placed faceup on the table — but its addition helps bring the game to life. Decktective: Bloody-Red Roses also tries to solve the problem of most cooperative games where 1 or 2 players tend to lead the gameplay. The Decktective solution: give every player bits of useful information and basically force collaboration amongst them. Neat!

Except that what might seem like useful information to you, might be irrelevant to me and players are forced to decide the value of a card and much of its content on their own. I played this game solo, but in my mind I picture a scene around a game table with a group of players arguing after playing Decktective: Bloody-Red Roses because one player discarded a card with information that would have lead the group to who is responsible for the death — and of course they didn’t remember it at the end of the investigation because they deemed it useless in the first place. Maybe this isn’t your game group and that’s wonderful, but I just feel like in this kind of game where the stress level and tension are already so high because players want to do well together, it feels like the slightest misstep (like accidentally discarding something useful) might make the tension boil over.

This brings me to another point: if we are all detectives working together, why are we withholding information from each other? I don’t moonlight as a detective, but I would like to think that if you are one who is worth their salt, then you wouldn’t just ignore a footprint because you found a threatening note in the fireplace that you thought was more important. But this kind of thing happens in the multiplayer game (I tested it by playing a “fake” one to see how it might compare to the solo experience).

In theory the archival system is interesting because it’s meant to create tension in the game that wouldn’t be there if players didn’t have restrictions placed on them to dictate what information they can share, but it just doesn’t quite work. After 10 cards are discarded to it, the archive becomes superfluous. Then players have to engage in this weird memory exercise at the end of the investigation because they’re now allowed to freely discuss the information they trashed.

Decktective: Bloody-Red Roses is pretty cool in theory; it’s a compact mystery-solving experience with a neat 3-D scene, a high level of collaboration required amongst players, and has a decent story — but it doesn’t succeed in its execution. I am hoping, though, that the designers learned something from Bloody-Red Roses and applied it to the next game in the series, The Gaze of the Ghost, because Decktective has potential.