Cryptid Review – Where in the World is El Chupacabra?

I love games of logical deduction. The electricity of the unknown, the thrill of peeling back one layer at a time, never knowing when the penny may drop and the mystery will reveal itself to you. Growing up, that game was Mastermind, a seminal classic among logic games in which one player creates a hidden sequence of colors and their opponent must guess it over a series of turns based on cryptic responses. Well, after 38 odd years of Mastermind, there’s a new kid on the block. All you have to do is find him. 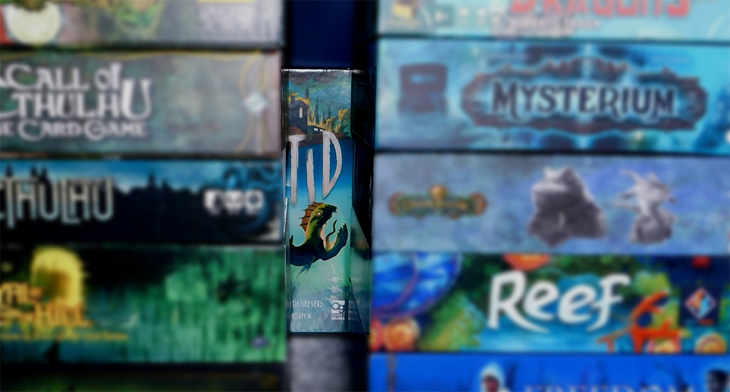 The Devil’s in the Details

Cryptid at once paints an intriguing premise, and I mean that literally! The box features a gorgeous rendering by the ever-talented (and seemingly-tireless) Kwanchai Moriya of the titular “creature.” In this case it’s presented as a gorgeous aquatic beast tantalizingly portrayed in light and shadow. As far as representing a game about hunting for mythic creatures goes, it knocks it out of the park. In terms of representing the actual visuals of the game’s contents, not so much.

It takes several games of Cryptid to get used to the way it looks, and that can be off-putting to players who are already on the fence about a game this analytical. The terrain tiles, by necessity, feature a wide array of colors and textures as they need to easily represent differing types of topography such as water, deserts, forests, mountains, and swamps. That much is forgivable, because there’s really no way to make 5 tile-types look distinct and still mesh. It’s the minutia of the game that make an already challenging premise doubly so.

It’s these little things–again, literally–that make it difficult. Solid or dotted lines on various hexes denote whether they’re natural habitats for cougars or bears (oh my!) only they’re somewhat difficult to see (even for non-color-blind players) against the colors of the terrain itself. Also, you will find yourself constantly referencing your player aid to see which is which and wondering why, in a game that sells itself so visually, they couldn’t have used paw prints or silhouettes. In a similar vein there are various structures placed around the map as landmarks (mountains and abandoned sheds in several different colors each) but these also are abstract, being represented by wooden triangles and cylinders. 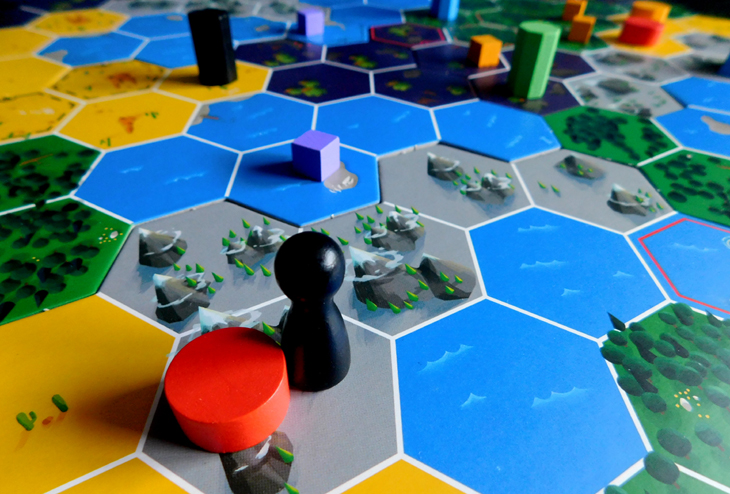 I would feel more petty calling attention to this if it weren’t for the fact that it’s tied so intrinsically to the gameplay. The easier it is to recognize what everything on the board means the less time you have to focus on that and the quicker you can start trying to figure out what it all means. Osprey, the publishing company behind Cryptid, also has such an excellent track record when it comes to their lavish productions (like their reprinting of London and stunning edition of Escape From the Aliens in Outer Space) that I hesitate to give them a pass on something that raises the entry bar for such an otherwise stellar game. And yes, it is a stellar game.

As previously mentioned, the premise is simple. You and all of your fellow players are budding cryptozoologists which, in case you’re not as huge a nerd as I am, is someone whose goal is to prove the existence of such folkloric beasties as Bigfoot, El Chupacabra, and (my personal favorites) the Fresno Nightcrawlers. Unfortunately, you don’t know exactly where to find your elusive cryptid. All you have to go on is the drunken ramblings of a local coal miner who said he saw it by the water. Or was it near the abandoned green shack? Or, wait, was it on a mountain? Or could it be all of the above?

Because that’s the twist: like any self-respecting pirate captain and his precious treasure map, all the information in Cryptid has been torn into pieces and scattered to the winds, and each player has a piece of that picture. So the game becomes an exercise in interrogation and deduction as you piece together the other players’ non-answers to try and paint a picture of where your beloved Bigfoot might be hiding.

The game proceeds in simple fashion. Each turn, players will place the cryptozoologist pawn (again, how can something that sounds so amazing be reduced to a boring, black pawn?) on a single hex and query one other player: “Could the creature be here?” That player will then answer, to the best of their ability, yes or no. Regardless of what their answer is, it will help to prove or disprove the countless theories that, like a true cryptozoologist, will be racing through your head a mile-a-minute.

As fast as your brain will be moving to keep up with all the information, the game itself will take on a pace that is a seemingly-oxymoronic mix of brisk and languid. Individual turns may bog down as players stare, brows furrowed, trying to make sense of the flotsam of information they have, but the game itself never feels strained. The reason for that is, in as much as you choose where to guess and who to ask on your turn, the answers players give are public knowledge.

So while Chupacabra Chad is mumbling to himself about mountains and swamps, Bigfoot Brad and Nessie Nelly are equally focused on whether the critter’s habitat is shared with wild cougars or if, perhaps, it’s taken up residence in one of the countryside’s abandoned shacks. The turn order is largely ceremonial (except when it comes to winning, but more on that soon) because there is so very much information to take in that you’ll want to take everyone’s turn to digest, process, and package the juicy tidbits that you get each round. Like sausages. 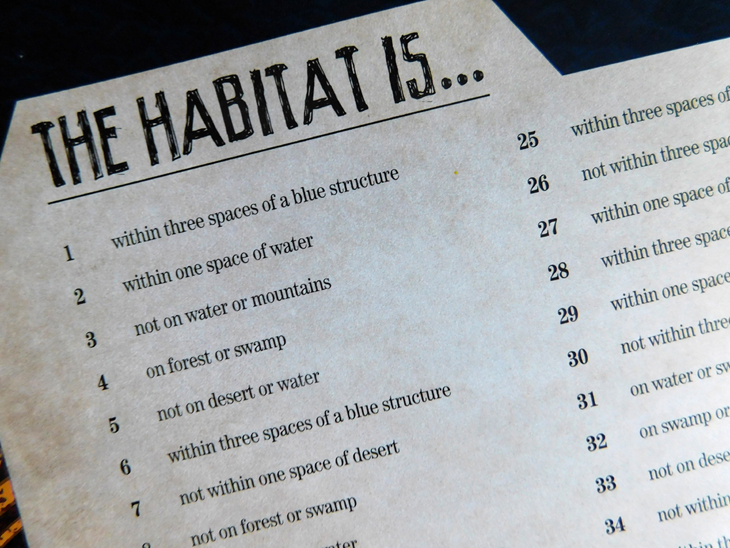 Fake it ‘Til You Find it

While the simple binary of the game’s information system may make it seem manageable, if you want to win you’ll need to make sure you’re a step ahead of everyone else. That’s not always as easy as it seems in a game where information is accessible to all and you are forbidden from lying. Which is where the next layer to Cryptid begins to reveal itself after a handful of plays, because while you must always tell the truth with your yeses and nos, there’s no rule against misdirection.

Pedants will debate the effectiveness of misdirection in a game so logically pure, but you’ll soon find yourself intentionally pausing before you answer a query, your eyes flickering noticeably to an erroneous corner of the board before you nod to yourself (for the benefit of everyone else) and reach out to place your “yes” or “no” token. On the flip side, you may find yourself searching areas of the map you know to be false to try and lure fellow hunters away, or you might try reverse psychology and search directly on top of what you know to be a key landmark, because no one would ever suspect that, right?

Similarly, every time you cause another player to place a “no” cube, you are required to place one of your own somewhere (and a “no” can never be placed on the same hex as another “no”). This means you have to be very careful and intentional about the information you’re hemorrhaging, because if you’re not careful you’ll give away the only thing of value that you have – your clue – a turn earlier than you’d like, and that can be devastating. 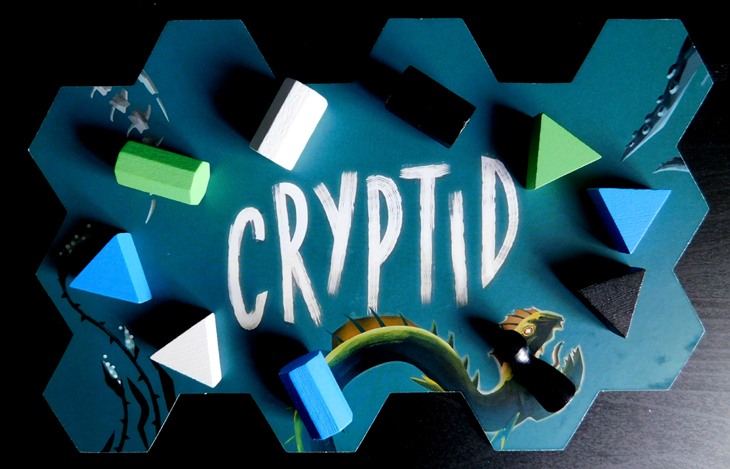 At any point in the game the player whose turn it is can choose to search instead of asking a question. This means they are staking their reputation (such as it is, I mean, you’re a cryptozoologist, after all) that the creature will be found on one specific hex. They place the pawn there along with one of their own “yes” tokens to indicate that, according to their clue, this is a valid habitat. Then, proceeding clockwise, other players will verify or invalidate that claim by placing a “yes” or a “no.” Any “no” tokens immediately end the turn and, as a mild slap-on-the-wrist, the active player must also place a “no” token somewhere else on the board to give the other players a bit more information.

You’ve Got to Know What You Don’t Know, You Know?

You never know when another player might be about to search, and that tension is something you’ll want to savor. The first time I brought out Cryptid we played it three times. Each time I had figured out the Cryptid’s location only to have another player search correctly before the turn order came back around to me. With the right crowd, Cryptid will be taut and nail-biting every time. In fact, with the right crowd this is a game that could go down as one of the best of the year (it’s currently among my top 5 for 2018). You should know, though, that it won’t be for everyone. 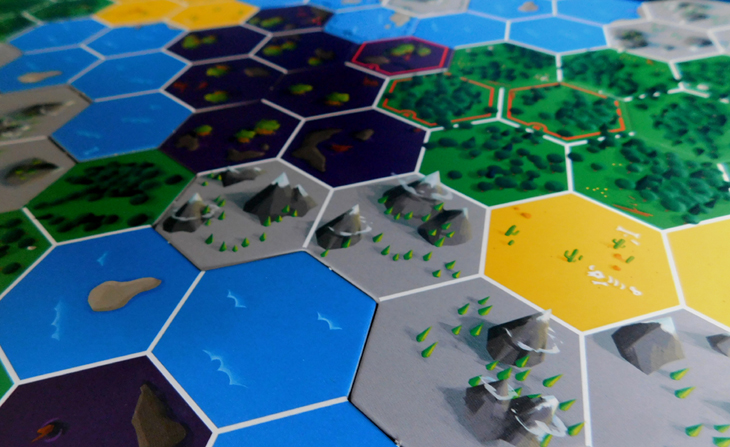 Cryptid has to be taken as a whole package or not at all, and some players simply won’t enjoy the gamification of some elements of that package. Yes, it’s a logic game, but there’s also the afore-mentioned bluffing and misdirection. On top of that there is a healthy dose of memory. Not long-term memory, because all the info you need is sitting right in front of you, but a flexible, robust short-term memory as you juggle all of that information at the same time.

While the manual itself suggests that using pen and paper is acceptable, it doesn’t actually come with any sort of tracking rubrik, and I feel like the use of such (contrary to what some other reviewers have suggested is necessary) would compromise what makes a game like this work. If you take away the element of memory and attention, you take away one of the key pillars of skill required to play the game. Anyone can sit and look and takes notes if given enough time, and given that option they may, at which point the game will start to slow down. It’s when you are forced to operate within your own limitations that you feel those barriers starting to stretch.

That said, not everyone will agree with me, and some will find Cryptid a tedious, chaotic exercise in futility. And if that’s the feeling the game gives you, using a pad of paper isn’t going to change that. But if you’re intrigued, if you like games that give you a puzzle and asks who can solve it first, and you’re willing to get your hands dirty and do some heavy-lifting, well, Cryptid just might be the new Mastermind. Only time will tell. 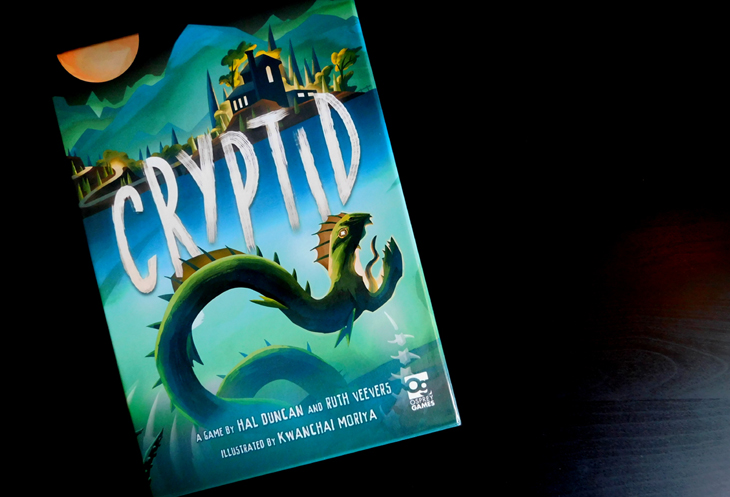 Designed by women   Diversity in gaming   Women in board games