3 Laws of Robotics Review: The Machines Want Our Party Games

3 Laws of Robotics is the latest game to tackle the social deduction genre group of games known as Mafia or Werewolf. It’s understandable why so many game designers have created their own take; these games successfully bring together gregarious outgoing jocks with quiet theater nerds and everyone in between, providing a potentially larger market than most games.

Each designer tries to address some perceived problem in the basic game. Some versions add multiple roles. One Night shortens the game but increases the intensity by shortening the narrative experience to one night. The Resistance adds more information to deduce from while making it playable at shorter player counts; at the same time drastically altering the feel of the game.

My own original experience with Mafia was actually playing it in Ukraine with college age youths who obligingly played in English for my benefit. It’s been nearly twenty years, but I still look back with a great fondness for that time of gaming fellowship with brothers and sisters from another culture. We played Mafia for hours with just a few roles and games were loud, well-paced and joyful – despite the theme of death involved. Until now, I hadn’t paid a lot of attention to the various additions or modifications to the game. I only played Mafia/Werewolf a handful of times when I returned to the States due mostly to logistics and other’s interests. I was happy with what I knew.

Today Floodgate Games, with designer Ben Kanelos, turns the nail on the head by reversing a fundamental rule of the game. In Mafia, you know your own role and the team you want to win, even if you don’t know who all is on that team. 3 Laws of Robotics gives you complete knowledge of everyone else but takes away knowledge of your own identity. Read on to see if the machines can take over our party!

In 3 Laws of Robotics, at the beginning of each round, you wake up as one of three factions: A.I. (artificial intelligence), Robot, and Android. The artwork I saw was very cute, making this a family friendly theme with no death involved. The A.I. appeared to be a small toy Tamagotchi that evolves into controlling a scientific scale with legs. The Android is your typical 3CPO golden body robot with iterations starting small with no arms and evolving into a fully humanoid form. Finally, the Robot faction has the lowest iteration as a toaster that evolves into the most violent picture in the game, a humanoid robot with a toaster head and a shoulder rocket launcher. Please don’t mistreat your toasters people! 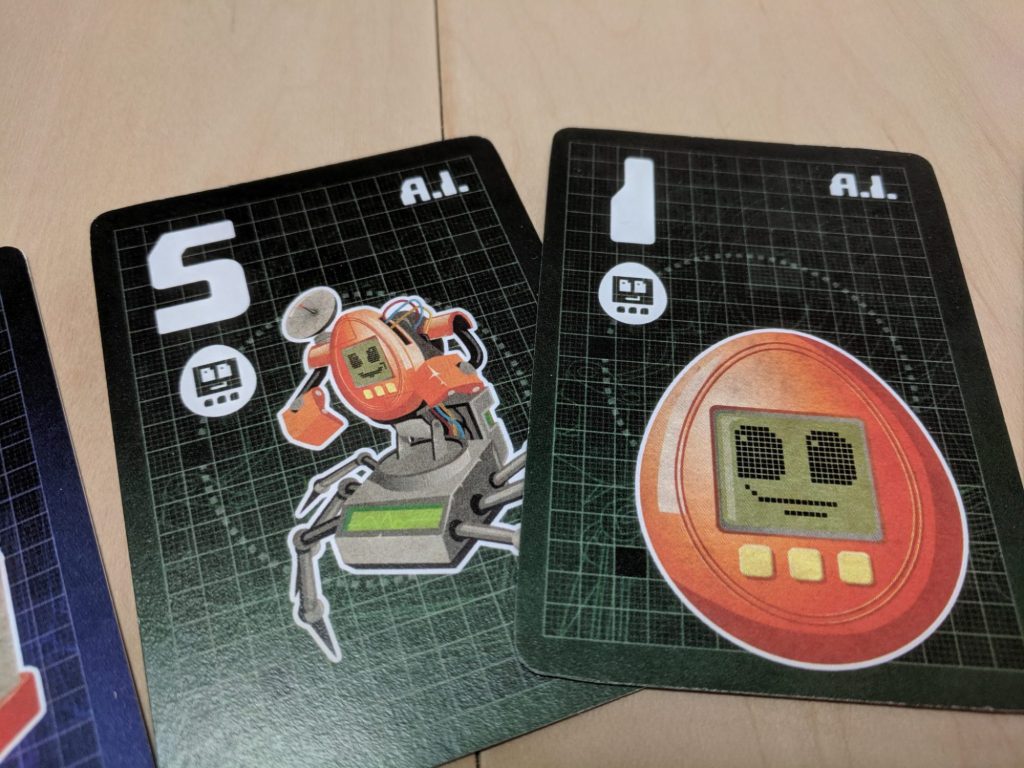 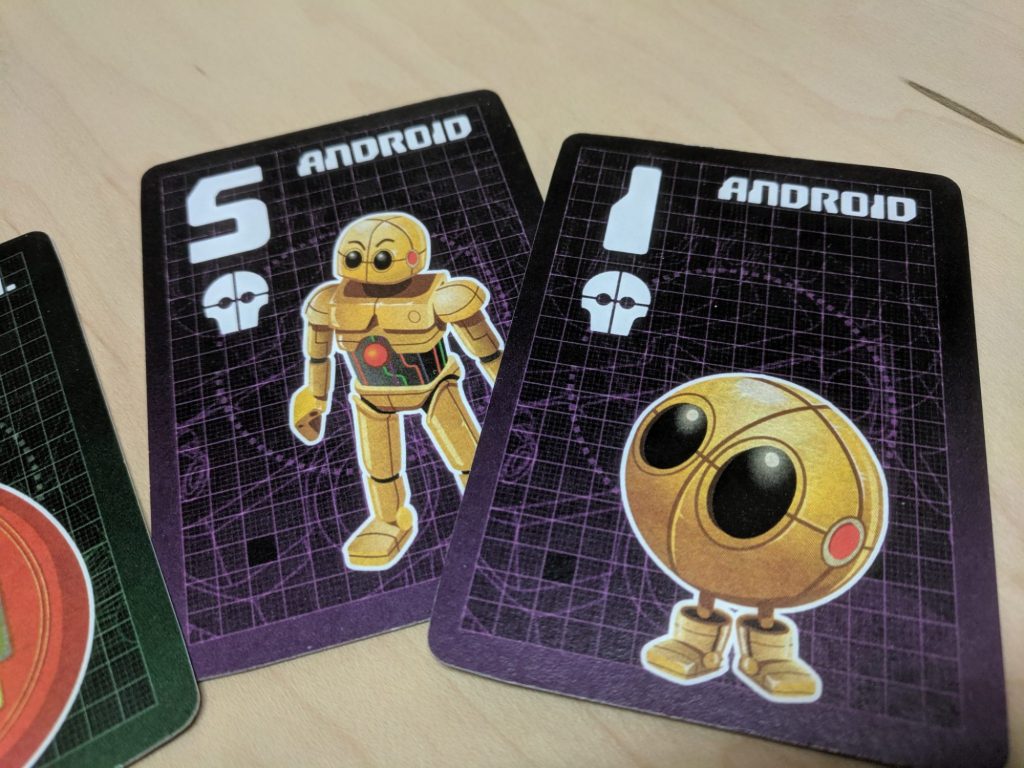 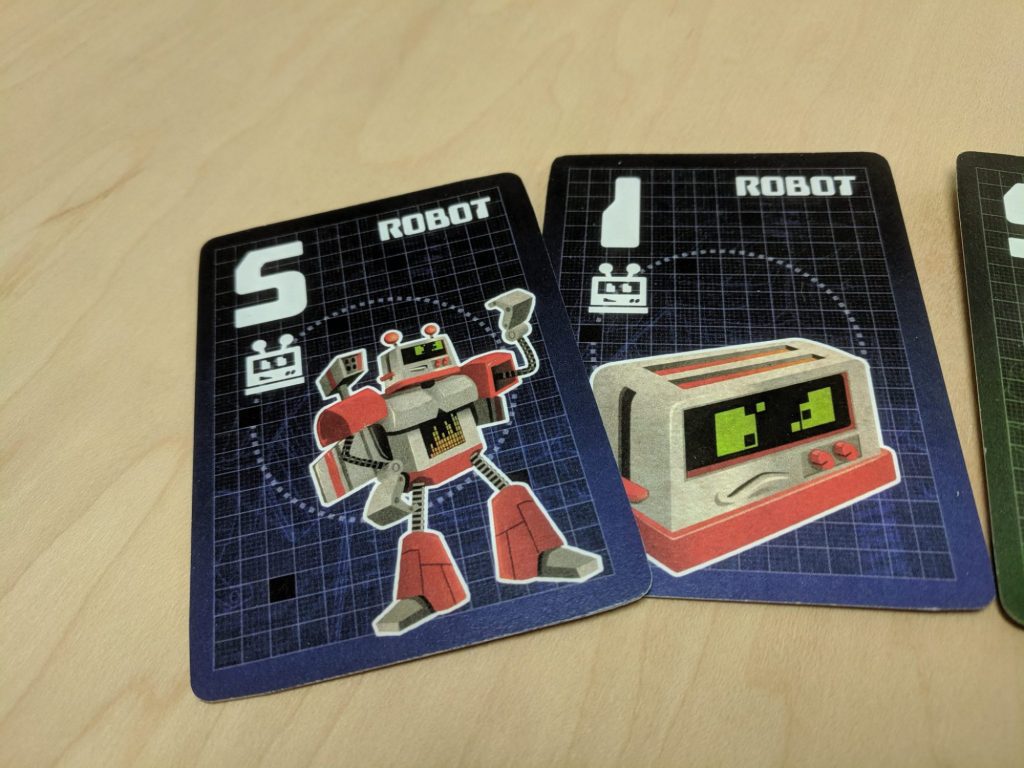 Storywise you are a member of one of these factions attempting to obtain your freedom by giving your security key to the highest member of your faction. However, your membership changes each round, so the story is pretty minimal to the game. It sets a silly tone that has a good potential with the right players, given how the game progresses.

3 Laws of Robotics has 4 rounds. The ultimate goal of the game is to obtain the most victory points by earning cards which are worth 1, 2, or 3 points each. You increase your odds of earning these cards by correctly deducing your faction and level each round and using that info to help your faction gain its freedom. 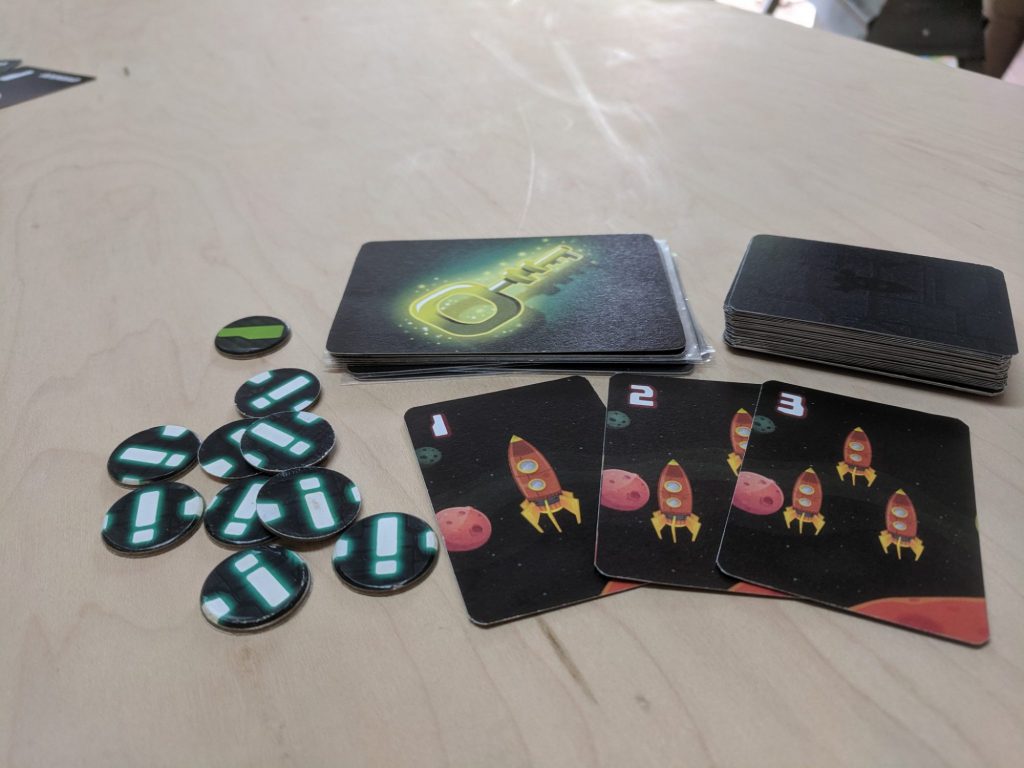 Entire factions earn point cards by having only their highest ranking member hold Security Keys at the end of each round, thus obtaining it’s freedom. Even one extra member of a lower rank holding a Security Key will prevent success here. If a faction is the only one to obtain its freedom this way, it earns extra point cards.

You also earn point cards by enforcing the additional changing rules in rounds 2-4. This is where the title of the game really comes into play. Each round after the first, an increasing number of Laws are drawn which set up certain restrictions for the round. If you catch a player breaking one of these Laws, you gain an Enforcement Token. Every player with an Enforcement Token at the end of the round gains one Victory Point Card and whoever has the most tokens gains an additional Card. 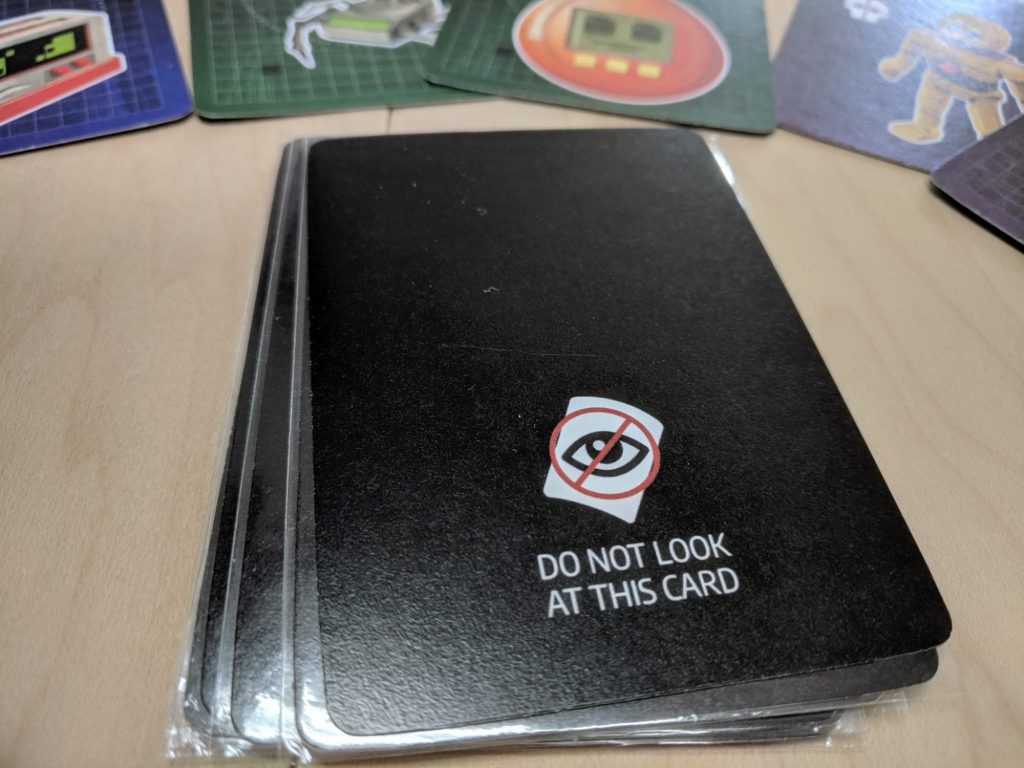 DON’T LOOK at your faction card!

The first round is fairly straightforward, though potentially bewildering for a first timer. Each player receives a Security Key and a Faction card. Players DO NOT look at their own Faction card, but hold them up so that all other players may see it. Then each player chooses another player and asks that player one question. After each player has done this, each player, in the same order as asking, chooses to either give their Security Key(s)* to another player or keep it. The goal at this point is to give your Security Key(s) to the highest ranking member of your own faction. You may refuse to accept keys as well, which is useful if you are confident that you are not the highest member of your faction. After this transferring of Security Key(s), all players may then look at their own card and determine who should obtain Victory Point Cards.

*When I played the first time, I overlooked the “(s)” after Key. I think that’s important because that leaves room for a person to be sneaky, collect a bunch of keys with bad information, and then transfer those keys to the correct person on their team.

In this first round, there’s no other restriction or rule governing what question you ask. You can even ask “what faction and rank am I?” However, there’s also no initial rule dictating that a queried player must tell you the truth. Additionally, asking such a straightforward question and getting a truthful answer may not be as helpful as you think. You benefit from obscuring information from other factions and by giving identity information to your faction members. This is what can make it initially bewildering…what question can you pose that matches all of these goals? Sometimes, all you can do is hope that your temporary teammates are smart enough to work with the information that comes before them.

With no Laws drawn, there’s no way to earn enforcement tokens in the first round.

In the second round, one Law card is drawn, 2 Laws for the third round and 3 Laws for the fourth and final round. Each round after the 2nd, prior Law cards are discarded. There are 25 Law cards to draw from.

Messenger – Players Must say “Message Sent” after posing any query 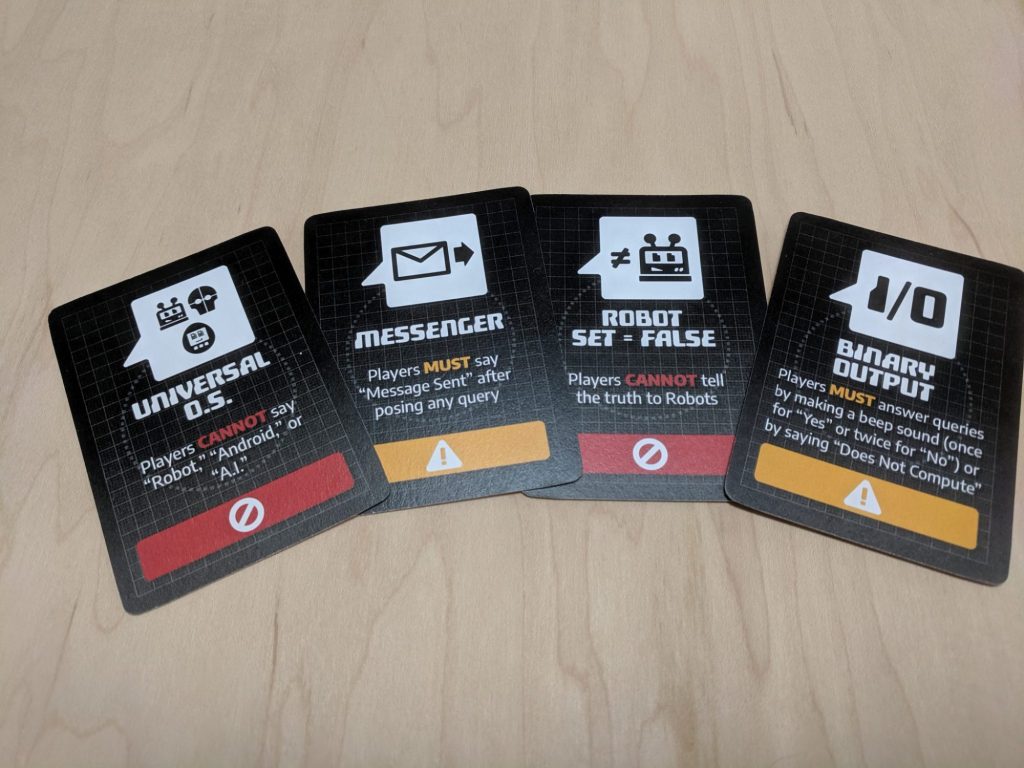 Play proceeds just as in Round 1, but players may also enforce Laws by saying “Error” and taking an enforcement token either from a pool of tokens or from the player with the most tokens when the pool runs dry. Players can also call “Error” on a mistaken “Error” calling player, obtaining their token directly from the mistaken player.

Players holding Enforcement tokens win Victory Point Cards as well the ones they win based on Security Key and Faction based holdings.

Experienced and large groups of players are encouraged to skip the very first round and I believe that’s a wise choice as the real fun of the game is in posing questions within a set of arbitrary and capricious rules.

I really enjoyed the game and I want to play it some more!

I got to play the game a couple of times before this review; the second attempt did not succeed. I attempted to play with non-logical children and it’s currently beyond their capability. Players must have a basic level of logic and reasoning for this game. With that observation, I realize that Mafia can actually survive a lack of logic out of a player or two and still manage to be fun.

The first time I played 3 Laws of Robotics was with 7 other college or recent graduate students, so not too terribly unlike my first time playing Mafia. Once we figured out the rules and fumbled with the cards, there was laughter, shouts of success, and groans at logical missteps. There was a moment when we all had to lie to Androids and there was only one Android and he asked a question that left the player stumped long enough that he knew she couldn’t figure out how to lie to him and we all found it hilarious. Everyone including myself seemed to have a great time.

Then a ninth player showed up. At the time of playing, the rules only allowed for 4-8 players, though I think it could handle some more with additional supplies. I think back to my time playing Mafia in Ukraine and remember having 20+ players. We would not have been able to play 3 Laws of Robotics.

After splitting to play a couple of smaller games, my present day group came back together to play 2-3 rounds of Ultimate Werewolf. This is where I discovered another wrinkle for Werewolf versus 3 Laws of Robotics. These players all liked getting into character, characters they came up with on the fly. They were very creative and were clearly having a lot of fun with it. Players have less room for such antics within the rounds and story of 3 Laws of Robotics.

These flaws do not make 3 Laws of Robotics a bad game in the least. It just frustrates me as it makes it more difficult for me to get a session in. If you have the right count, it can go quicker than a game of Werewolf since the discussion is limited to one question per player. Whenever I have less than 9 players, I’d be more likely to recommend this game than other social deduction games.

All that said, I think this game has a lot of fun experience potential with the variety of Laws and questions. Even if you play with the same group repeatedly, each game is likely to be different. So, watch out; the Robots are coming for your small parties and they will make you laugh.