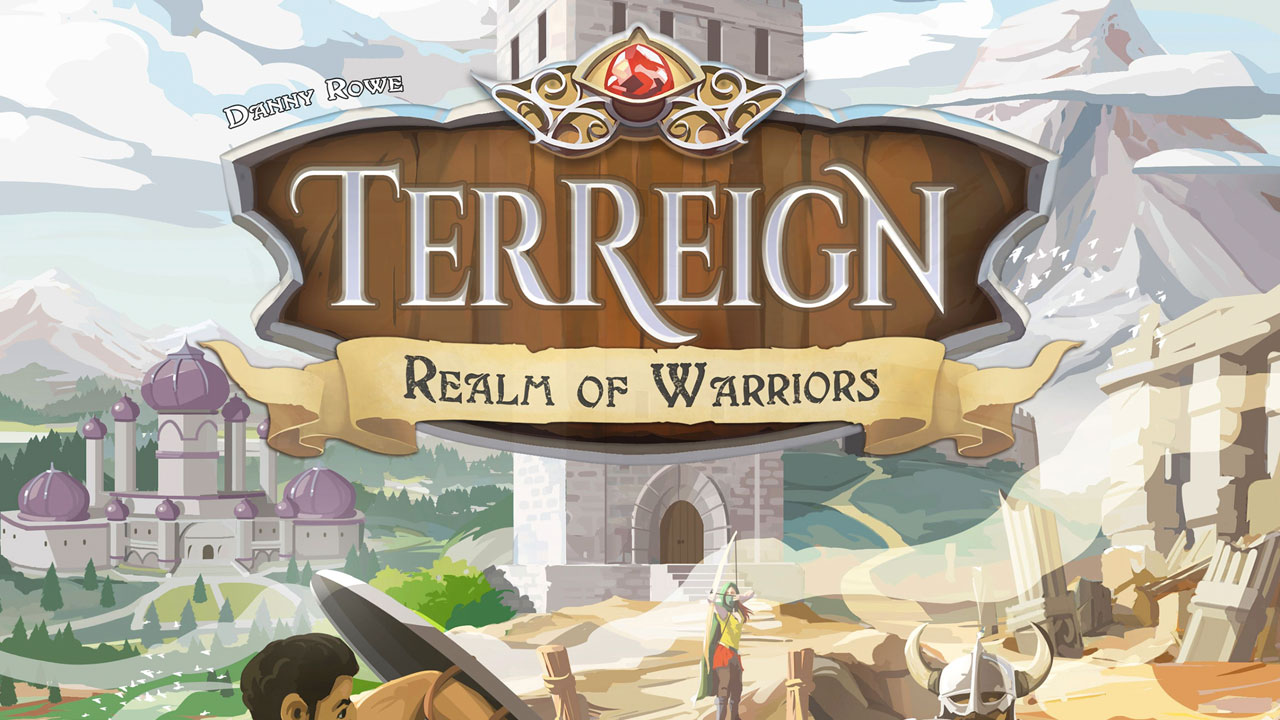 Back in 2002, a game called Bang was released to the masses. It’s a western-themed hidden role card game about sheriffs, outlaws, and renegades shooting each other. I hated it; your decisions were completely driven by the card draws and it was easy to figure out what the best course of action will be. Throw in player elimination along with excessive downtime, and it became my personal level of hell.

According to game designer Danny Rowe, Bang was his inspiration. Unlike many other “inspired” games, this one doesn’t take the mechanisms and slaps a new coat of paint. To catch some of the influence of Bang, you need to squint at the details. There are no guns, hidden roles, player eliminations, or cowboys here.

To be blunt, I was expecting an average experience when I first heard about this one. All the warnings were there. First-time publisher? Check. First time designer? Yep. Kickstarter? Scary. Yet despite those warnings, this is the biggest surprise for me in 2020.

Enough prattling around. Let’s get into the outline.

The Throne needs a new ruler and the great Houses have chosen their champions to settle this argument. You are that champion and your task is to get five Reign tokens at the end of a round. You start with one Reign token and you can only earn the fifth one by winning a duel. There are several ways to gather Reign tokens:

As part of the game’s setup, you will draw the number of Terrain tiles equal to the number of players, with each tile having advantages or disadvantages.

These tiles will formulate a landscape you and friends will contend in every single game. Some tile combinations might lead to a scenario that restricts certain tactics such as defense against ranged attacks, and you must adjust to it.

Unlike typical skirmish games where you move around the board with a standee or plastic doll to represent your fighter, you will place tokens. You’re going to find out that reading your opponents is a big part of this game.

At the start of every round, you will place two tokens on the Terrain tiles facedown. One of them represents your Warrior and the other one is your Decoy. Once everyone has done this in turn order, all the tokens are flipped, and the first player of the round begins their turn.

After everyone completes their turn, reveal an Event card to perform the funny text effect, and that would conclude a game round.

Easy To Jump Into

One of the things that stuck out for me was this game’s approachability. I would even go so far as to call this a gateway game. Sure, I listed a bunch of actions, but everything is spelled out on the player’s mats. There are also various card types like equipment, agility, and range. Like the actions, they are also explained on the player mats. I’m only highlighting this because even the biggest publishers completely neglect player aids or mats as a reference guide.

Since I did mention the duel action, that means I need to talk about the combat system. It’s quite simple.

You have four attack cards listing the four spots: Head, Body, Left Hand, and Right Hand. Pick an attack card and place it face down. Your opponent’s defense cards will block two spots and they put their card face down. Reveal the cards and see the results. If your attack goes through, you deal a point of damage and you win that round of combat. Each duel is three rounds.

Mechanically speaking, this doesn’t sound interesting, so why do I like this so much? It’s because of the consequences and outcomes of these fights.

Usually, when one mentions a duel, it often leads to death or severely injuring your opponent. That’s not the case here. Most of your Reign points will come from winning duels, not dealing damage. Damage is simply icing on the cake and you can win the game without making anyone lose any Morale. The entire system rewards you for being aggressive and outguessing your opponents.

As an attacker, if you win two out of the three rounds, you win the duel and earn a point. If you win all three combat rounds as an attacker or defender, that’s a flawless win and you get a point. Reducing an opponent’s Morale to zero, either through a card or a duel, also grants you another point. Also, there is no player elimination here. If your morale is ever reduced to 0, you simply spawn in the next round.

At first, this might not sound like much as players will just duel each other to earn a point or two. Once players start hitting that third or fourth point though, the game reaches a point of no return where each duel becomes a shockwave of change. Suddenly, every decision, every reveal, and every strike have noticeable weight behind them. The onlookers will cheer for the underdog’s successes and growl at the favored’s triumphs. A single win or a flawless fight can lead to victory for one champion.

Everything I described so far is based on duels with no Item cards involved. In any other game, cards with rule-breaking effects tend to muck up the experience by stalling the game or sabotaging another player’s progress. Instead of that nonsense, the majority of cards in this game are designed to elevate the dueling, not hinder it.

To give some perspective, the blue Equipment cards can give potential perks for attacking or defending. Most of these benefits only activate if you win combat rounds.

That axe placed face up in front of me? It allows me to deal 2 points of damage if I strike your head. So, am I going to strike your head in the first combat round? Or am I going to try to bait out your head defensive cards? Maybe I won’t attack the head at all. No matter what choice I’m making, you’re going on a mental roller coaster ride because of my Axe card. Yes, it does give me an edge, but only if I can outguess you.

Another tool in your arsenal is the yellow Agility cards. These are the typical play anytime cards. These defensive cards allow you to reset a combat round or ignore damage.

It’s good those yellow cards exist because the red Range cards will become a problem. Even though they use an Action on your turn, you can attack players on adjacent terrain tiles. Let’s say they are good against low Morale rivals to earn an easy point. The Standard brown cards mess around with movement such as forcing an opponent to come to you.

The last one is the purple Instance cards, and this is where my mixed feelings come in. As soon as you get them, you must play them. The most common one is the Cataclysm card forcing the Terrain tile to change. Yet, I can’t ignore some of the more questionable ones like the Arrested card that forces you to skip a turn. Another one is the Usurp card, forcing you to steal another player’s Reign token if they are in the same Terrain tile as you. I understand why these Instance cards are in, since they punish players relying on card draws, but some of the effects could have been more interesting and less detrimental.

The beauty of this entire package is you don’t need the cards to win. If you are good at duels and getting into people’s heads, that’s enough to earn you a spot on the Throne. Being an aggressive dueler is rewarding, and the only thing these cards will do is give a slight advantage. Don’t be surprised if the very first round of the game involves you getting into a duel or three.

To prove this, let me briefly describe my first game.

It was a four-player game. Another player and I were new. The other two players were a seasoned tester and the game designer. I drew some item cards, and they were only red and brown cards, which weren’t useful in this situation.

I’ve won the first duel and forced my rival to retreat. Another player used a Charge card to rush towards my location and started a fight. My defense was flawless, earning yet another point. Now I’m at three Reign points.

The second round begins, and I’m last in turn order. Another duel where I am on the defense but no flawless, so no point. When it was my turn, I dueled an opponent, and all three of my attacks hit. It was a flawless win, giving my final two Reigns points.

Yes, I ended the game in the second round.

I didn’t have any equipment cards or any yellow agility cards. I won because I read my rivals in all three duels and two flawless wins. That means I won 8 out of 9 combat rounds. These duels are completely deterministic by both sides, so my decisions lead me to victory.

Some of you will likely point out that having a game end hastily is a bad sign. I am going to disagree with this viewpoint. Most modern games overstay their welcome because the gameplay loop doesn’t warrant their length. This isn’t limited to lightweight games either. I can easily point to games like Terraforming Mars or Gaia Project as concrete examples of this.

TerReign understands that it is a light game, and it is designed to end in a dignified manner. Each duel puts more points onto the field, leading to an avalanche that cannot be stopped. No weird “take that” cards here to reverse the progress.

I cannot say the same about the player powers though. Some powers are quite straightforward and to the point, like starting with 6 Morale instead of 5. Yet, most of them are very situational. What do I mean? Nevermsis’s ability is their ranged attacks will ignore agility cards. Sounds great, unless you do not have any Range cards. Another one is House Tagion that manipulates the purple Plague card, but what if that card never comes up?

I used these two houses during my first four games, and I won 3 out of the 4. I’m glad dueling plays a bigger role than the house’s ability, yet I also cannot ignore how inconsistent these powers are.

That’s a small issue for this entire experience though. In the grand scheme, TerReign is a surprise hit that fixes many of the issues of similar older titles. It is very rare to find a game with a rules-light experience while maintaining meaningful tension. Anyone looking for a gateway game full of fighting should keep their eyes on this one.