Once upon a time, the whaling industry was a booming enterprise. The fisheries along the eastern coast of the United States were responsible for most of the country’s intake of valuable commodities such as whale oil, blubber, and meat. One town, in particular, stood out among the rest as the preeminent whaling port in all of the United States (if not the entire world). That town was New Bedford, Massachusetts. 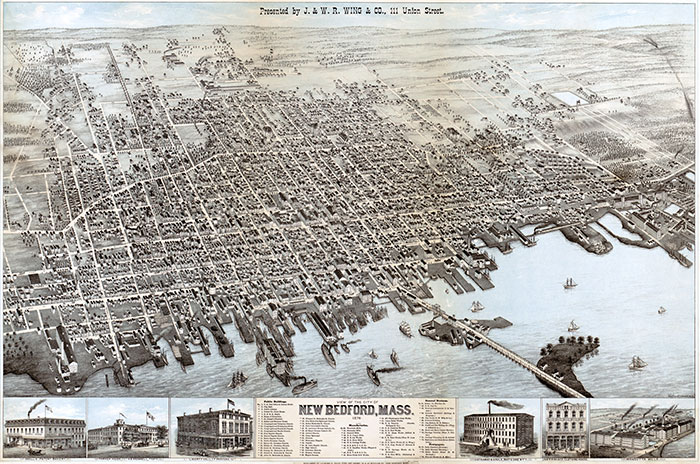 In the game of New Bedford, the players will compete to purchase buildings and manage whaling vessels as the town of New Bedford begins to grow from its humble beginnings into a sprawling mini-metropolis. This is accomplished through a combination of worker placement, resource collection, resource management, and a little bit of whaling. After 12 rounds of play, the person with the most victory points will be declared the winner.

Opening New Bedford is a delightful treat. Nestled inside the gorgeous box are a bevy of different tiles, money tokens, wooden pieces, a town board, a whaling board, four player boards, the rule book, and a canvas bag. The tiles come in several different forms: three different kinds of whale tiles, a bunch of empty sea tiles, a couple dozen town tiles, and two whaling board tiles. 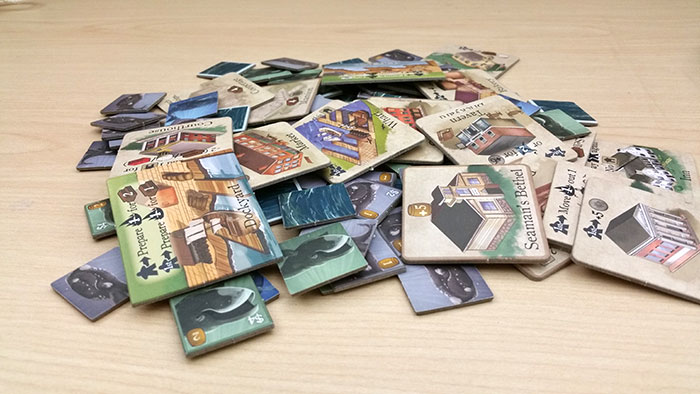 New Bedford includes wooden player pieces in 4 different colors for the players to choose from. There are two meeples per color as well as two boats (a large one and a small one). There are also three different types of resources: brown log-shaped pieces which represent lumber, red bricks, and white food tokens which are painted to look like hard tack. Also included are a whale shaped round tracker and a starting player token that is shaped as a ship’s wheel. 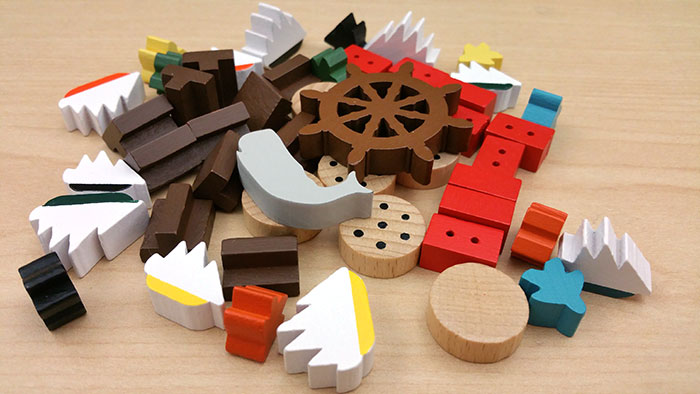 These pieces are of excellent quality. The tiles, tokens, and various game boards are made of very thick cardstock and the wooden pieces have a nice visual appeal as well as a nice heft to them. Nothing in this game feels cheaply made. New Bedford is very well produced.

The town board and whaling board are placed within easy reach of all players. The round tracker is placed onto the 1 position on the whaling board and the two whaling board tiles are placed in their appropriate positions above the board. The resources should be separated by type and kept within easy reach as well. After this, a number of town tiles will be selected at random and placed side by side closeby with the side that shows the resource cost facing up. The number and type of town tile (action tiles and victory point tiles) that should be used is determined by the number of people playing. 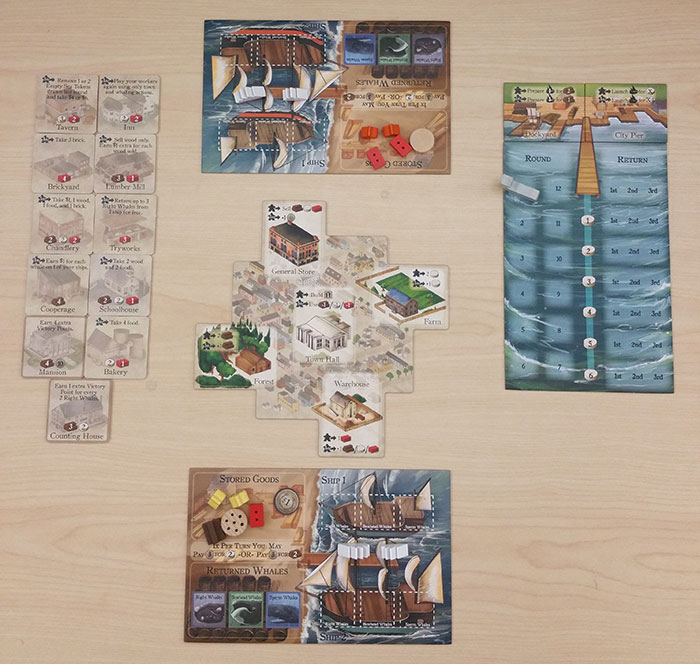 Each resource in the game is assigned a monetary value. Wood and food are worth $1 each, brick is worth $2, and each coin is worth the value printed upon it. After collecting their home board and all of the pieces of their chosen color, each player then chooses $5 worth of resources to begin the game with. For instance, one wood ($1), two food ($2), and a brick ($2) would be a valid combination. The selected resources are kept in the storage area on the home board. 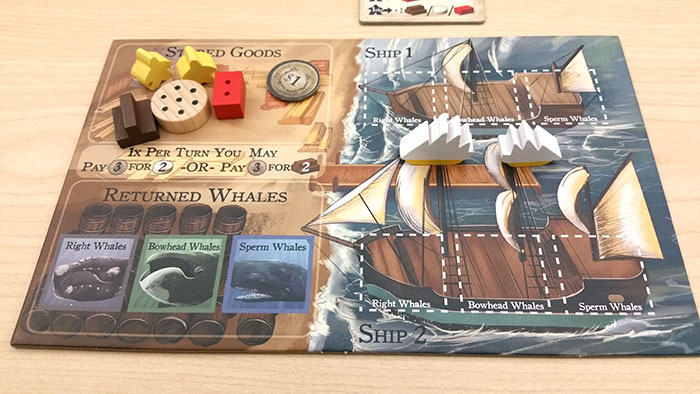 The next thing to do is to place a number of whale tokens into the canvas bag. The exact makeup and number of tokens is determined by the number of people that are playing. Finally, the starting player token is given to the randomly selected starting player and you are ready to begin. 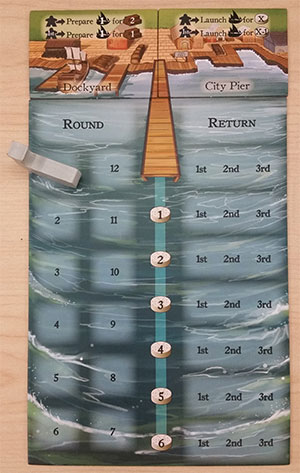 A hefty portion of a player’s victory point total at the end of the game is going to come from whales that they have collected as the game progresses. These whales are collected by readying and deploying ships onto the whaling board.

At the top of the whaling board is the boat dock and this is divided into two sections by the two whaling board tiles. One tile allows players to ready a ship for deployment at the cost of some wood. The other allows players to launch one of the ships that they have readied a certain number of spaces depending on how much food they pay to do so. The further out the ship is, the longer it will take it to reach the return point and the more opportunities it has to catch whales.

The home board is divided into four different sections. One section is a storage area meant to hold any resources that the player has collected. Beneath this is a storage area for whales that the player has captured. On the right hand side of the board are two interim cargo hold areas for whale tokens that the two boats have picked up but have not been brought into port yet. The illustrations of the boats are different sizes to correspond with the physical wooden boats. This helps to keep track of which boats are carrying which whales. 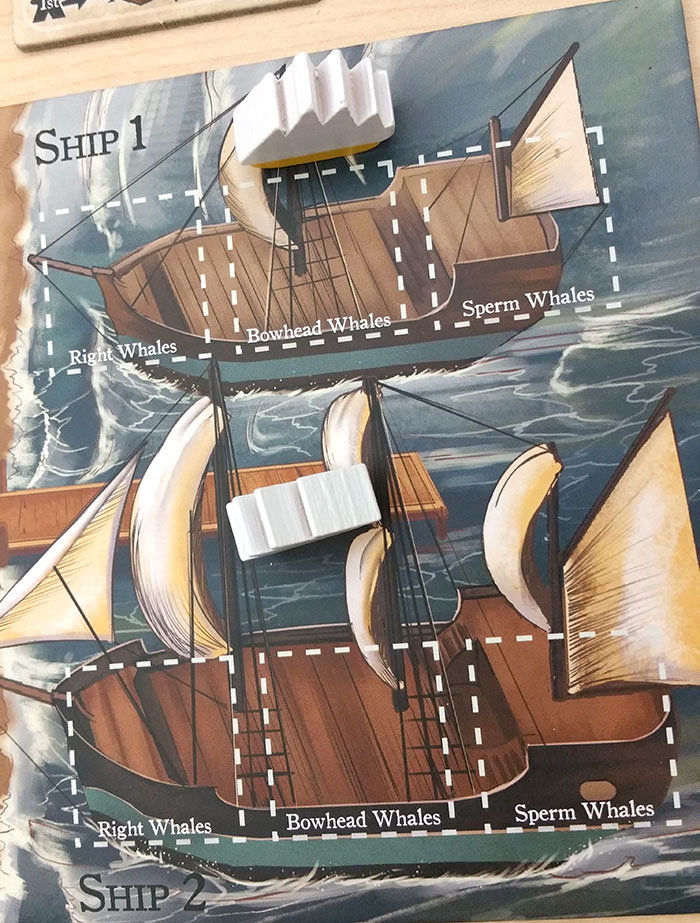 Even though I have never played this particular mode, it is worth mentioning here that flipping the home boards over will reveal the solitaire mode that is also built into the game.

Anatomy of a Round

New Bedford is played in a series of twelve rounds and each round is divided into four distinct phases: the actions phase, the movement phase, the whaling phase, and the end of round phase. Here is a general overview of each of the phases.

Actions phase – the players take turns placing their meeples onto any available action (either the ones pre-printed on the town board or any action that has been purchased by themselves or another player) and then doing whatever the action says. Most actions can only be used once per round, but there are a few which award a small bonus to whomever was the first player to select that action. These spaces can be used by any number of players during a round.

If you choose to use the action on a town tile owned by another player, you must pay them 1 silver to do so. 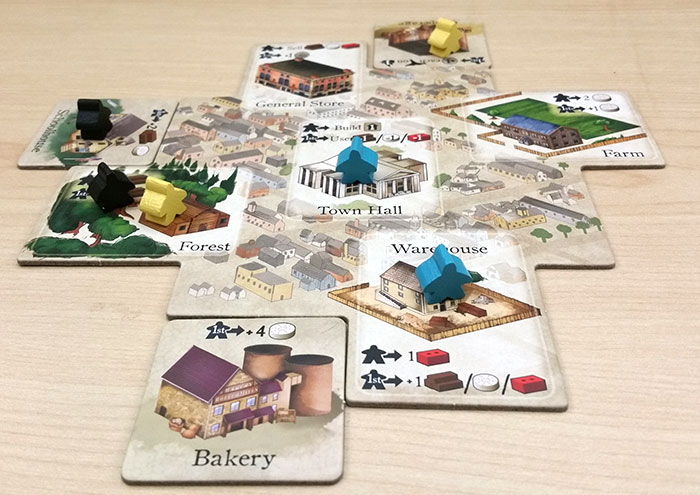 Movement phase – after all players have selected their actions, any boats that have been deployed onto the whaling board will move one space closer to town, beginning with the boats nearest to the port. 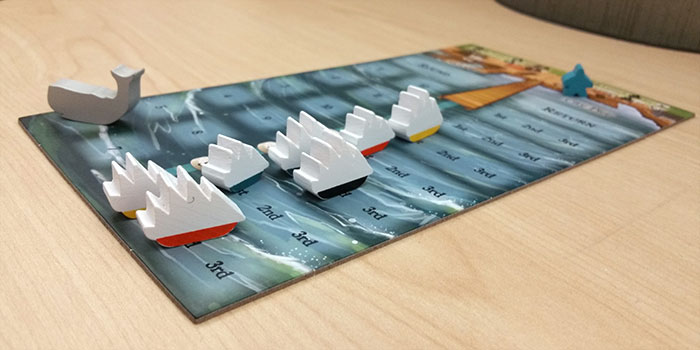 If a player’s movement brings their ship into port, then they must either pay for their whales and keep them, or put their whales up for auction. Any kept whales will be worth points at the end of the game. If the player cannot pay for their whales or chooses not to, those whales are put up for sale to the other players.

Whaling phase – beginning with the boats that are the furthest out, a player will reach into the bag and draw a number of whale tokens equal to the number of boats that are present on that space plus one. These tokens are placed face up in a shared pool to the right of the whaling board in a horizontal line adjacent to the current space as seen here: 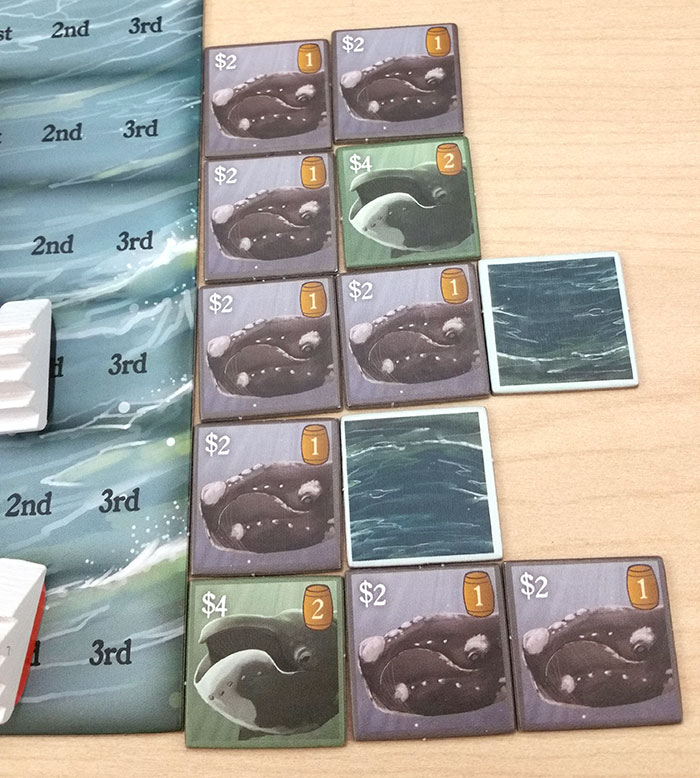 The player whose boat is on the spot furthest from the shore will select one of the available whale tiles and then place it into the cargo hold area of the appropriate ship on their home board. Then the next player selects one, etc. If a player has to select a whale token and there is nothing left but empty sea tokens, they will simply place that empty sea token back into the bag. The leftover tokens are kept out until the beginning of the next whaling phase.

End of Round phase – the players collect their meeples, the round tracker moves up one round, and if there are any town tiles that have actions that fire off at this time, then those actions will occur. Then the starting player token is passed to the left and a new round begins. 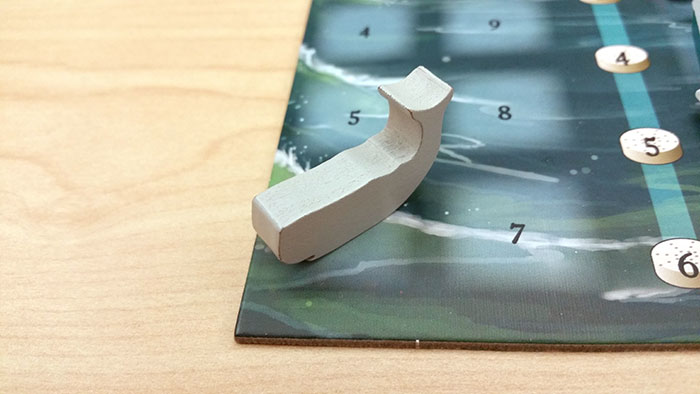 Let me begin by saying that New Bedford is a beautiful game. There are games that originate on Kickstarter that arrive to you feeling cheaply produced and low budget all around, but New Bedford is certainly not one of those. The artwork is fantastic. It’s bright, colorful, and really does an excellent job of drawing you into the game and setting the tone. Nolan Nasser has done an amazing job here. And, as I mentioned before, the various components of this game are of outstanding quality. The cardstock is thick and durable. The wooden pieces are excellent. Even the box feels tough and resilient.

“But, what about the game play?” you might be asking yourself. That’s an excellent question.

New Bedford is very balanced. The game has two main focuses: building and whaling. Ignore either one of them and your chances of doing very well aren’t going to be very good. Unlike some games where some actions are clearly more powerful than others, each building tile in this game offers something unique and intriguing without being overpowered. Having to pay your opponents to use their building tiles helps to keep this balance in check. In the games that I have played, I don’t think there was ever a single building that didn’t get used at some point.

The whaling aspect of the game is something that I haven’t seen anywhere before. Whaling isn’t a guarantee. It’s a gamble on future returns. The further out you can send your ships, the better the odds. The real trick is figuring out how to ensure that you’ll have enough money to pay for the whales that you have caught by the time your boat reaches the shore. Oftentimes you will find yourself having to make a decision between building or whaling. The choice isn’t always easy because resources are very tight in this game. 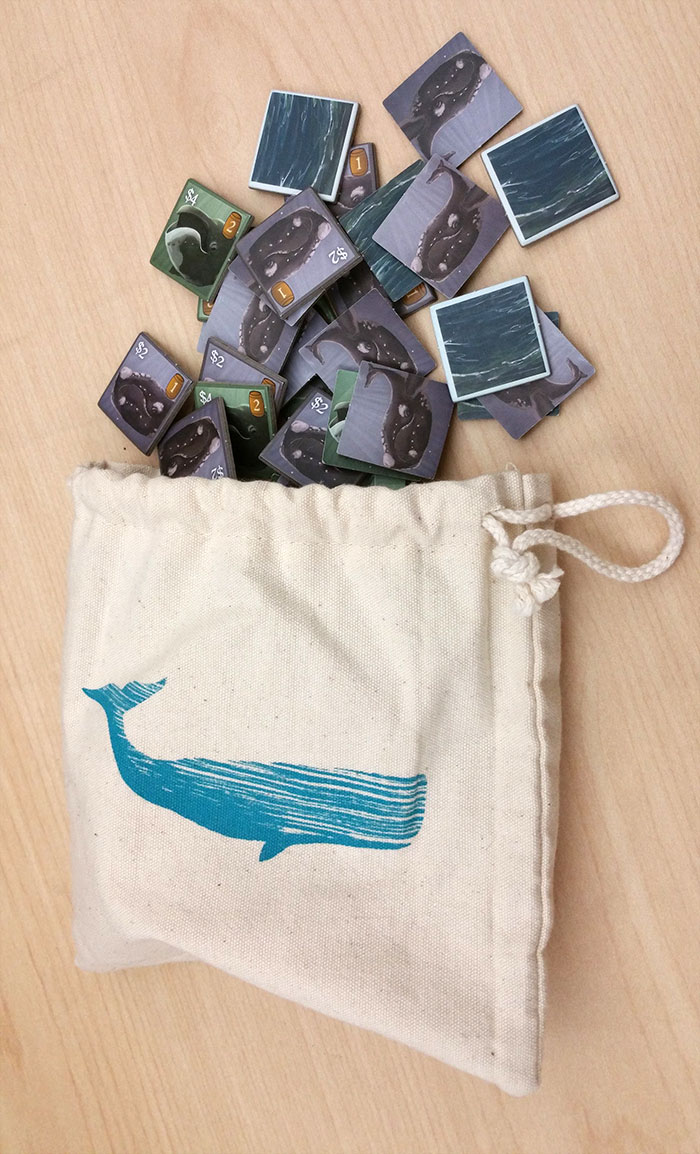 As interesting and as fun as the game is, though, I’d be disingenuous if I said that the game was anything new. New Bedford is a pretty standard worker placement game. You place your workers. You collect resources. You build stuff. The stuff that you build gives you new options to collect resources and the cycle continues. Aside from the whaling, there’s nothing about the game that journeys into uncharted territory. While this may seem like a weakness, it can also be viewed as a kind of strength as well.

New Bedford’s not a very difficult game to learn and the theme is engaging enough that it makes the game interesting to play. Because of this low barrier to entry, New Bedford is an excellent way to introduce someone that may have never played such a game to the wide world of worker placement. This is an excellent springboard into heavier games like Agricola or Stone Age. If you’re in the market for a lighter worker placement game, then definitely consider New Bedford. While it’s not the greatest game ever made, it’s still a very good one.

What do you think about New Bedford? Give us your opinions about what you like and/or dislike about the game in the comments below!