I first learned about Masters of Renaissance: Lorenzo il Magnifico – The Card Game through a glut of Twitter posts with gifs showcasing its marble contraption. I’ve even included my own gif later in this review. It is an incredibly satisfying component. But if the marble component is the prize inside, how does the rest of the cereal taste?

Masters of Renaissance: Lorenzo il Magnifico – The Card Game (going forward referred to simply as Masters) is an engine building game where you’ll be buying and using engine cards to turn some resources into more resources. You won’t be scoring points directly with your engine, but your engine cards and your stored faith will be worth points at the end game.

Resource management is crucial. Any resources you gain are stored in a temporary holding cell and must be kept in unique sets of 1, 2, and 3 resources. If you would gain a 7th resource, 4th type, or too many of one type, you discard the excess and the other players gain faith due to your avarice. 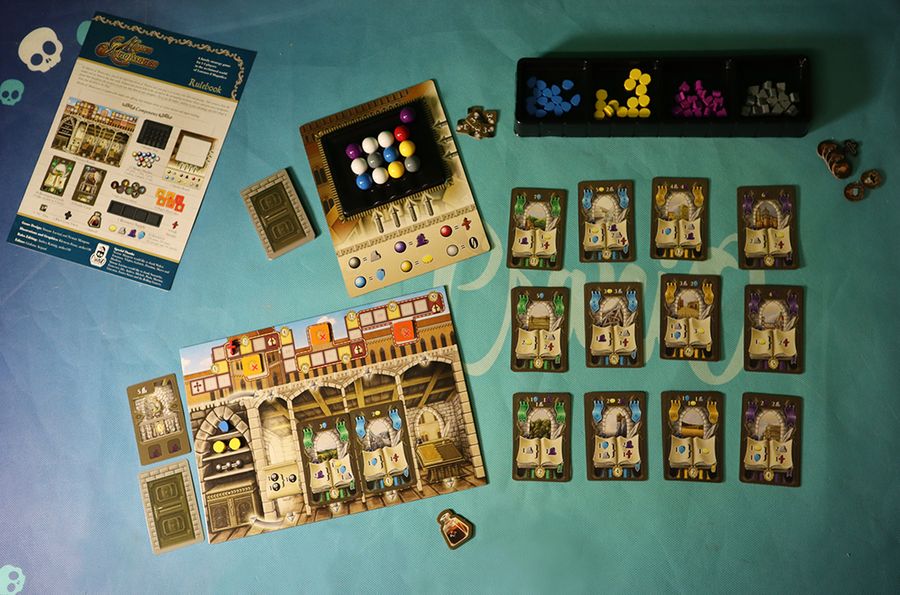 Luckily (and necessarily) any resources gained from your engine cards are permanent and don’t follow the 1-2-3 collection rule. Higher leveled engine cards can cost up to 6 of a specific resource so running your engine correctly can be very important.

The game ends after one player has built their seventh engine card or reached the end of the faith track. The player with the most points is the winner.

Masters has a lot of great ideas, but the game feels half finished. The ideas that sound good on paper end up falling shy of being all that interesting. What it does well may end up being a new mold we see in other games, but everything else will be forgotten.

Let’s start strong with the marble component. The 3×4 grid represents resources, each ball color having a match, except for white which gains you nothing. The 13th ball on the outside is picked up and pushed into the grid, forcing another marble out and down the ramp. You gain resources for each marble in the row/column you pushed.

In this marble example I’d score two blue resources and a purple resource.

I love this mechanic. The component may be a gimmick (easily replaced with cardboard tokens) but it is euphoric. Because other players will move the balls, you can’t always plan on some perfect move. It’s like Potion Explosion or Gizmos but with a bit more depth.

You also have to be careful that you don’t break the holding rule, losing a resource and giving faith to your opponents. Unfortunately, the more you play the less likely you’ll run into resource trouble. Each game we played rarely saw a player give out faith, removing one of the few sources of interaction. It might be because there are 7 options to choose from when gaining resources, but I think the main issue lies with the engine cards.

The engine cards are boring. They are nearly identical and it doesn’t matter which one you build. This one gives you 2 blue resources for a yellow, this one gives you a purple and faith for a blue. As you build higher levels, they simply give you better value. 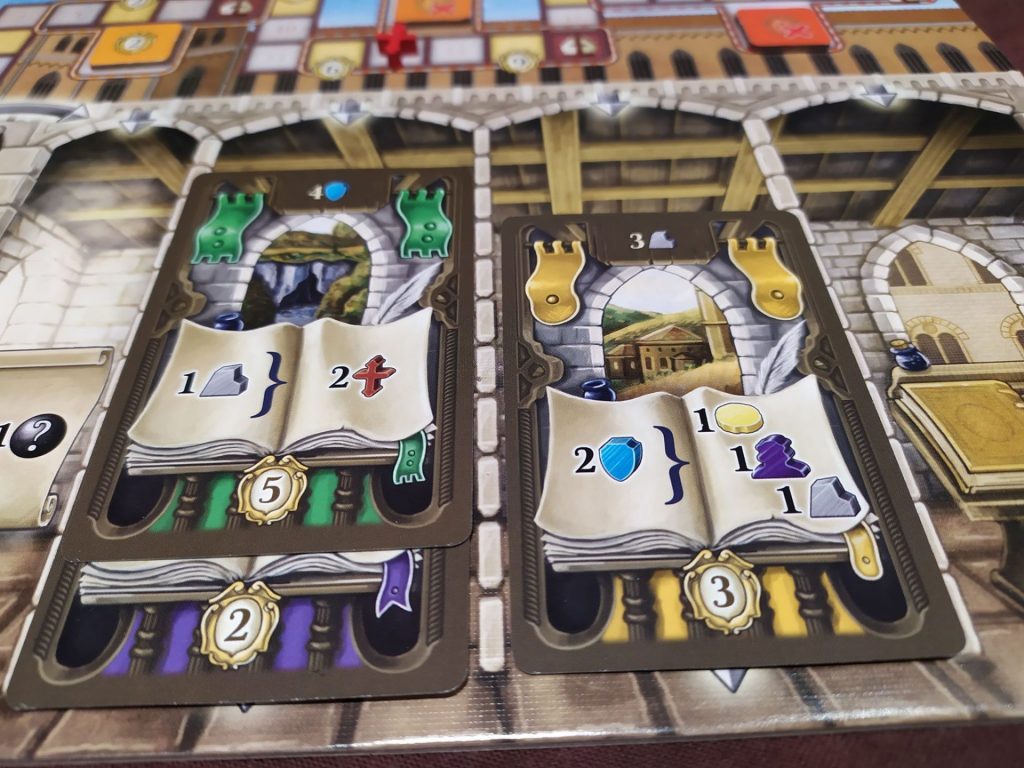 On the left, one stone gets you two faith. On the right, two shields get you one of each other resource.

There is one crucial flaw to this system: if you spend your turn running your engine, any resources you gain from it can’t be used until your next turn—which means you can’t chain your cards, removing the most important cog of an engine building game!

On top of this, you can only have three working engine cards. As you build more, those new cards are placed on top of the old, removing their function but leaving their points. And since there are no duplicate engine cards, there is a chance another player will steal the one key card you were focusing your build around.

These flaws make the cards you buy uninteresting and you often don’t care which you get. The game forces you to stop having goals and without goals you stop being invested in the game. It simply doesn’t matter which one you build because they don’t connect together. Go for the available one that is easiest to afford based on the resources you find easiest to acquire. The game practically plays you, your actions are barely your choice. 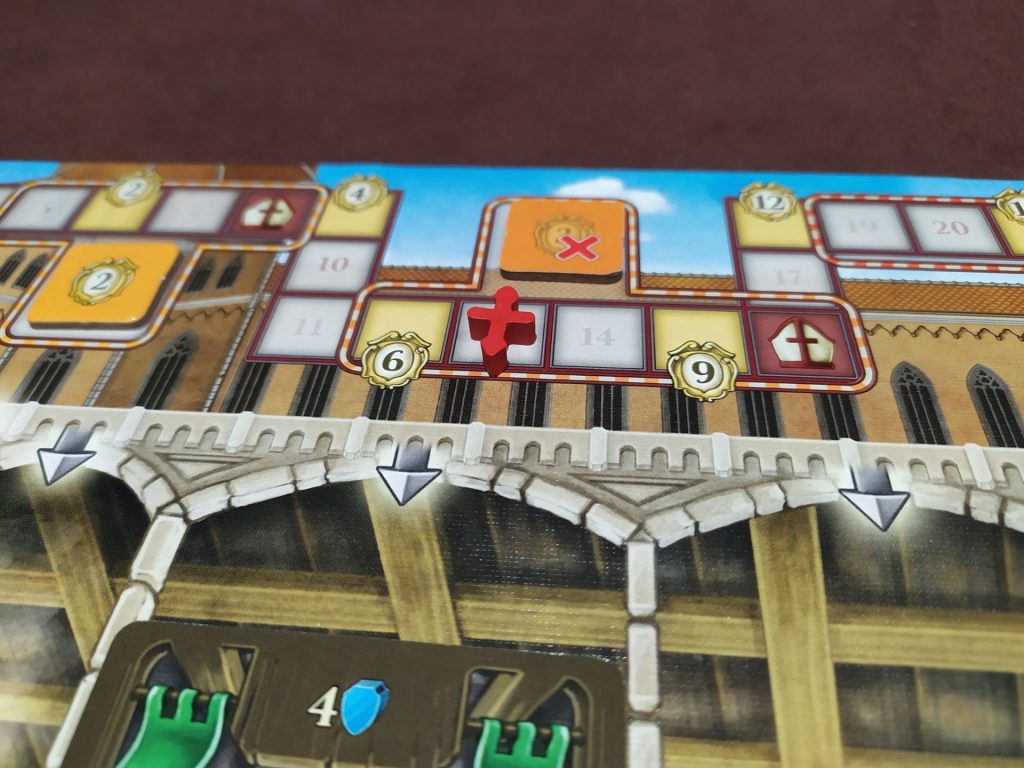 When any player reaches the Pope hat, any player in the outlined area gets to flip their orange token for bonus points.

The only thing left to mention is that the interaction is very low, but it isn’t worth a whole section. Other than card stealing and the moving marbles, the only other time you realize other players are involved is the faith track. But the race element there is so easy that I’ve accidentally kept pace with opponents in games where I didn’t care about faith at all.

If you’re looking for a low interaction 30-minute engine builder then Masters might be what you’re looking for. Everything in the game works as—I assume—intended. There isn’t any flawed mechanic or imbalance that breaks the game. It’s just… bland. It’s a box of basic corn flakes in a hundred meter cereal aisle.

Sometimes, corn flakes are all you want. Masters has a very short play time, doesn’t ask much, and does its job. But why buy the pricier box with the toy inside when the cheaper Oh My Goods! tastes better? And let’s not forget that Race for the Galaxy is still on the shelf after all these years, the classic flavor that seems timeless.

Resources at the top are temporary, those in the chest are permanent.

To keep on this cereal comparison (because why not?), if I buy corn flakes these days it’s because I need them as part of a bigger recipe, like crunchy baked chicken. Masters has that feeling of being part of a larger experience. While Uwe Rosenberg was making A Feast for Odin, he took a single side-game out of it and created Patchwork. Masters feels like that, but unlike Patchwork doesn’t feel complete on its own.

The complete experience is, I assume, Lorenzo il Magnifico, but at no point do I feel like I’m playing a lighter version of Lorenzo, even if that was the intent. The colors match, so does the theme, but the mechanical connections have all changed. The excommunication negatives have now changed to a simple loss of points and the engine workings aren’t similar at all. The thematic tie-in with Lorenzo feels like a marketing ploy and nothing else.

As you can probably tell, I can’t recommend Masters of Renaissance: Lorenzo il Magnifico – The Card Game. It’s boring, themeless, and utterly forgettable. But if someone wants to make an abstract game entirely around that marble contraption, I’m all in! That thing is slick.