Ever wanted to be the villain in an old horror film?  Well now you can! Campy Creatures is a fun trick-taking game where up to four aspiring scientists battle it out to capture the most enticing mortals for their experiments.  You accomplish this by sending your diabolical creations to various locations to abduct these mortals – but alas, other monsters are there as well. You’ll have to fight; using wits and brawn to capture the mortals that you desire. Who will come out on top? (Hint, it’s probably  not the mortals!) 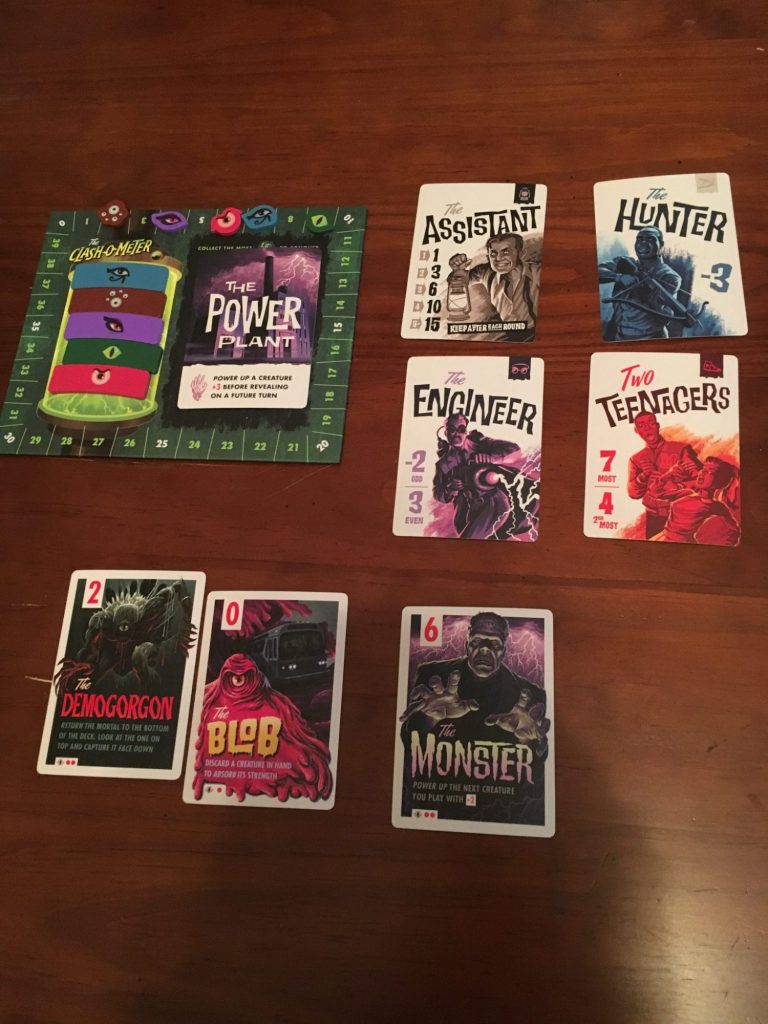 Campy Creatures is played over a series of turns that build into rounds. Each player (errr, scientist) plays a monster card from their hand to capture the tableau of mortals cards at a randomly revealed location. There are a limited number of mortals available each turn so you must choose and play your monster wisely. Careful planners get to choose who to capture first. The tastiest mortals go first and you do not  want the leftover, lower- or negative-point scraps after other players choose their target. After each round of Campy Creatures, players total their points (positive or negative) from captured mortals, certain monsters, and location bonuses to see who is in the lead. After three rounds of this capture-chaos the game ends with one brainiac reigning supreme. 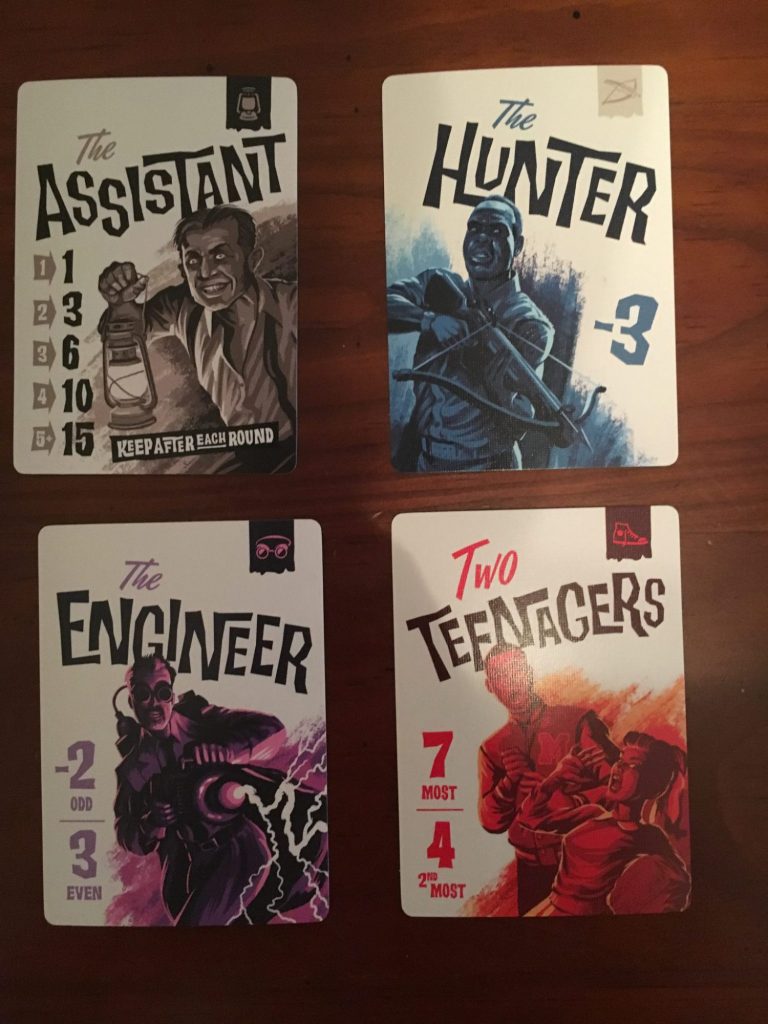 Ah yes, the poor mortals;  these poor souls are like sheep to the slaughter for your army of powerful monsters. Most of the mortals you will encounter will be ideal for your studies and will provide you a variety of positive points.  These cards are broken into types that score differently: straight points, sets, or majority. Beware though, as not all mortals are defenseless. Some mortals come prepared for a fight and will be more of a pain in the backside than they are worth. Cards such as the hunter or deep sea diver will actually hurt your score by giving you negative points.  Some cards even offer a risk reward mechanic where they will give positive points or negative points based on how many you have.

Not only do these varied scoring conditions offer a lot of personal strategy, but they open  a lot of options for how to “contribute” to your opponents’ research efforts. You may find it helpful to attempt to stick a fellow scientist with a choice subject or two to really mess with their score. 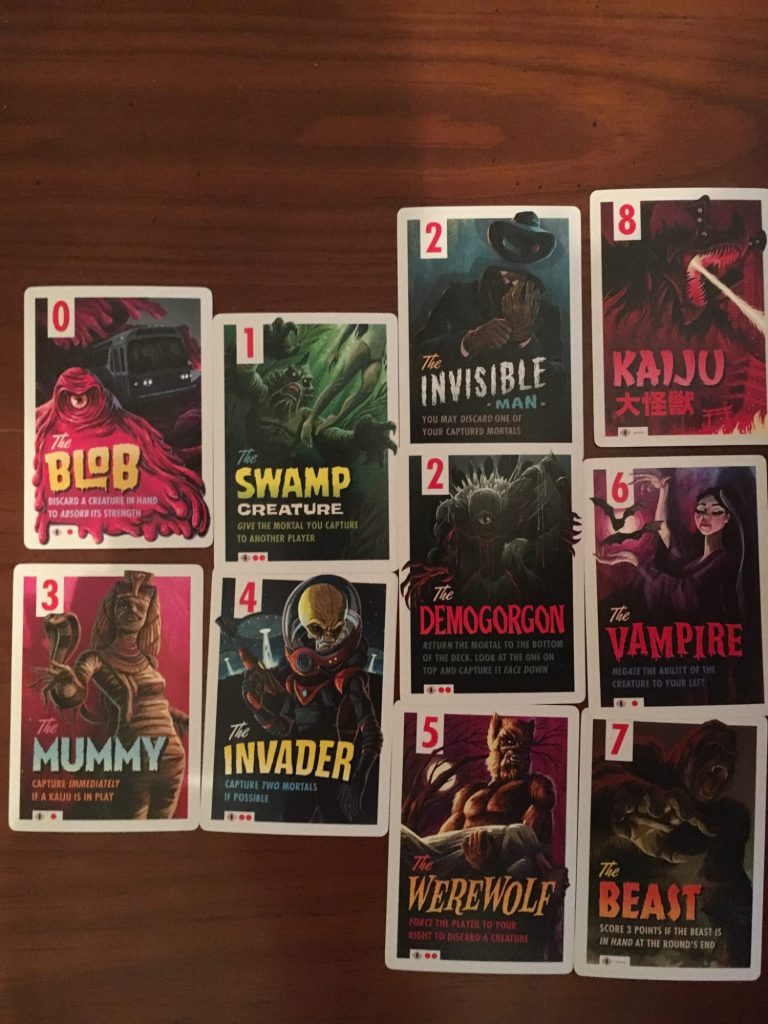 Each scientist plays Campy Creatures with the same deck of Monster cards. Each has a set of monsters with power numbers ranging from 0-8.  That power number determines the picking order when selecting which mortal or mortals you desire to capture. Now you may think that higher numbers equate to a better monster, but no mad scientist is complete without a few tricks up his sleeve.  Monsters also have special abilities that activate before, or during, capture that give them a wide variety of sneaky ploys. This means that the highest number does not always win.

This strategy is the lightning bolt that brings life to Campy Creatures.  Each turn you find yourself trying to outwit your opponents as you decide which mortal to target and what monster to deploy. What’s more each monster can only capture once per round so as the turn goes on you have less and less options available to you as you try to accomplish your goals. It requires some scheming and trickery to come out on top!

Locations and Clashing (I couldn’t think of another M word) 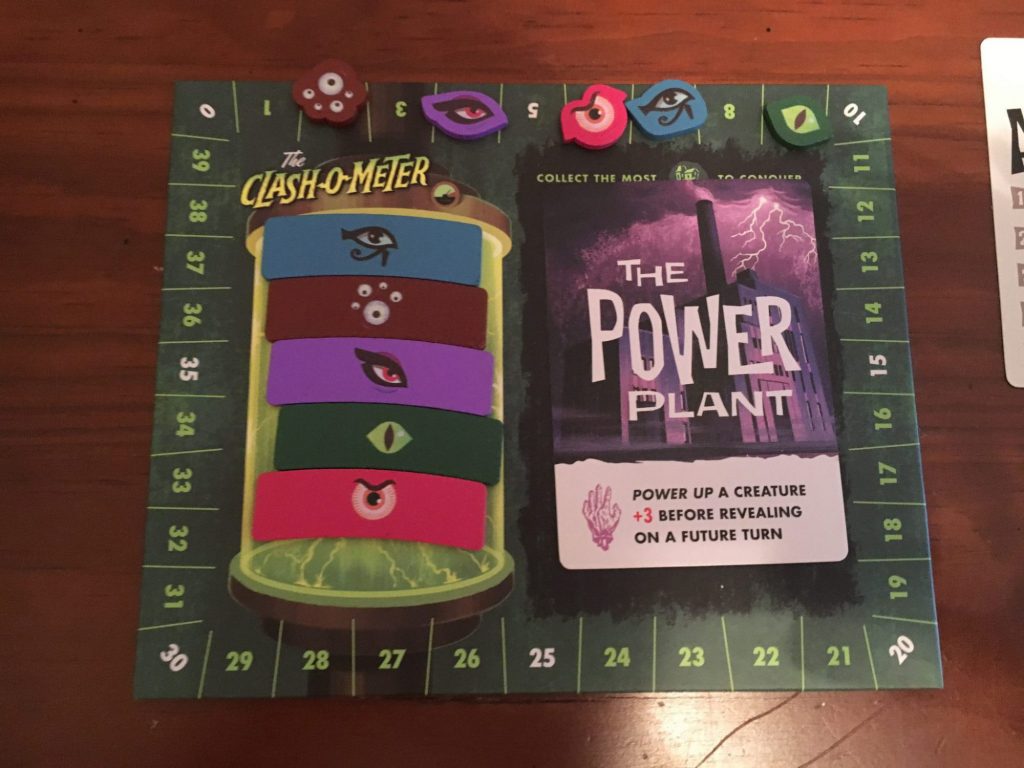 First, it displays the current score and who is leading the pack.

Second it showcases the current location for this capture round.  This will offer certain bonuses that provide unique scoring options or incentives to the scientists.  This feature offers a great deal of variety to Campy Creatures and is a great feature.

Finally the board shows who is on top of the Clash-o-Meter!  Now you may ask yourself what the heck is the Clash-o-Meter? I am so glad you asked!  From time to time two scientist will have the same bright idea to send the same monster on the same turn. (Great minds think alike.)  As turn order is usually dictated by who has the card with the highest power number, ties are resolved by who is highest in the Clash-o-Meter.  The higher-ranked and winning player on the Clash-o-Meter then falls to the bottom position of the tracker so other scientists can have a chance to bask in the glory of being top dog, for a while at least. 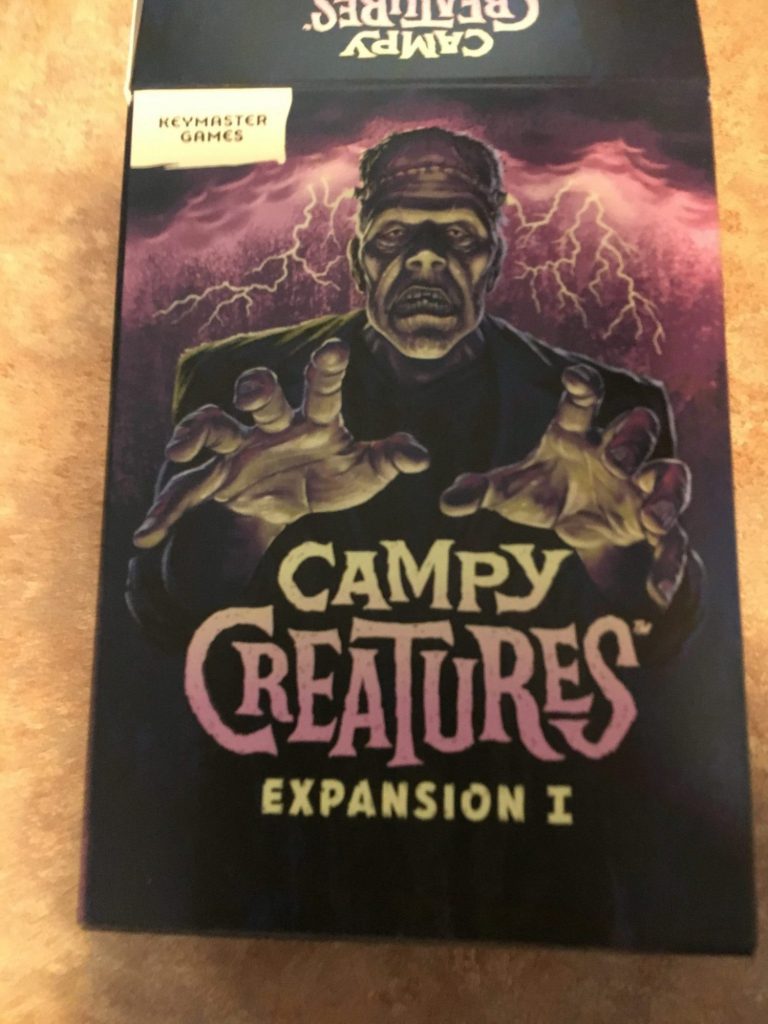 If all of this heinous highjinx is not enough to sell you on how great Campy Creatures is, there is already a mini expansion to further incentivize you. It adds a new mortal type, new locations, and new monsters to add even more variety to this already great bluffing game.  Each round players will select their hand of monsters but can swap out a few different monsters. You can still only have one of each number, but these new monsters add more diversity and give you more sneaky tricks to use against your opponents.. This add on simply adds to the great replayability Campy Creatures already brings to bear. 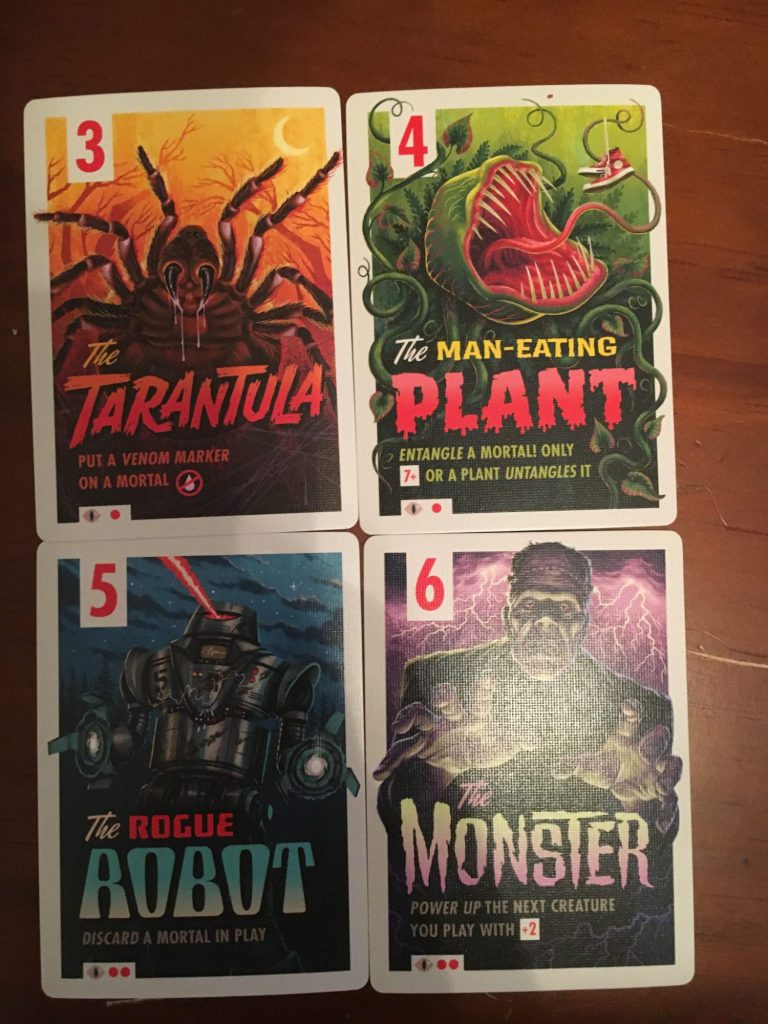 Campy Creatures really grabbed my attention. It is a fun mid-level filler style game that makes you think. So many fillers feel like they’re on rails, but not Campy Creatures.I was given hard choices and had to constantly work to count my opponents cards while determining when to really push for an early pick.  The quality of the components and the beautifully thematic art style really sell me on this game. The only negative thing I could say about Campy Creatures is that, as new players learn about their monsters, their powers and how ties are broken it can cause a bit of anxiety and discomfort for new players in high player counts as they may feel less equipped on the first round of play.  Campy Creatures fits into a nice niche in my collection and it plays really well with a varied player count. All of these things, along with the replay value make Campy Creature a stunning success in my book. 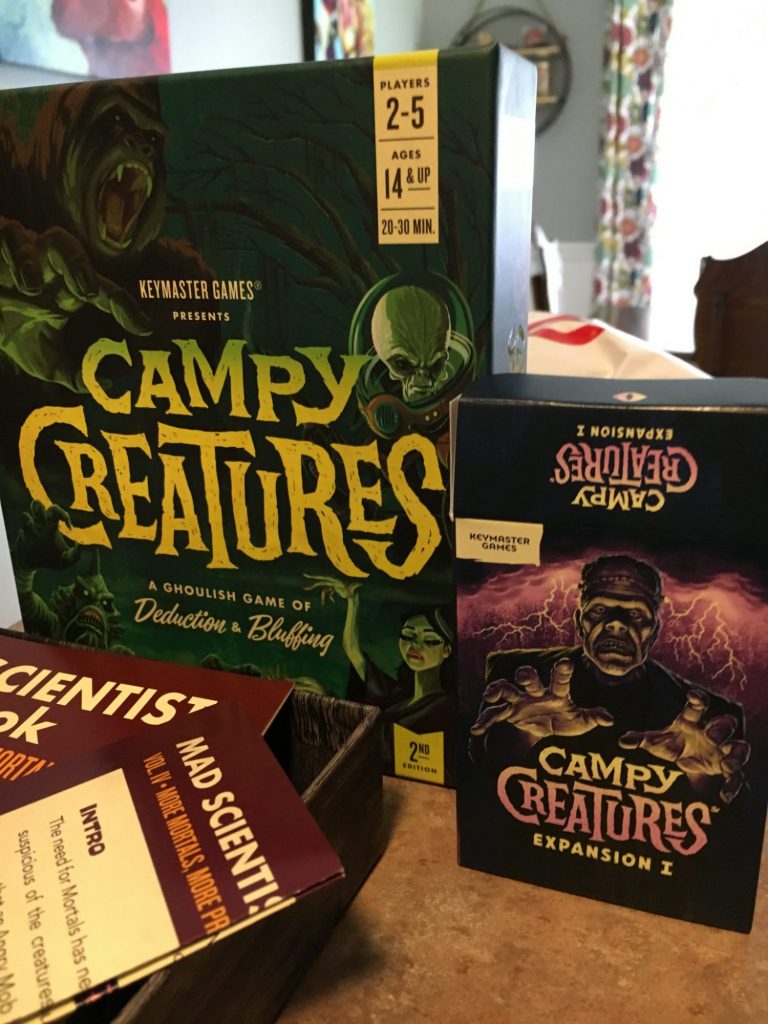